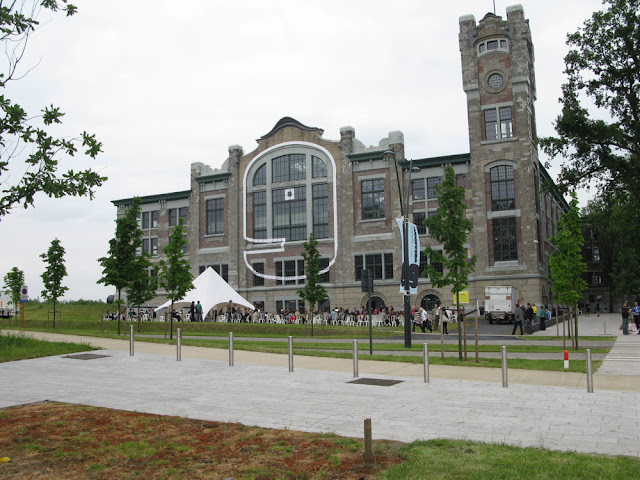 Façade of the Waterschei industrial complex of the former coal mine in Genk where Manifesta 9 takes place.
Extra materials:
40-page 'Shortguide' newspaper as a PDF
Digital catalogue

In her prologue Manifesta founding director Hedwig Fijen, defines the difference and the strength of the current incarnation of the European biennial: "'The Deep of the Modern'" is the first Manifesta biennial to intentionally leave behind its strictly contemporary origins as the basis of its exhibition model. As an uncompromising European contemporary art event, Manifesta 9 distances itself from the much-hyped model of showcasing only the latest artistic production by emerging talent, typical of these mega-shows. Instead it embarks on a critical attemps to foster interdisciplinary and intergenerational dialogue between the history of the site and the sometimes overlooked memories of the mining communities."

The introduction of an art historical perspective into the project has been a way to appeal to a more diverse audience, as Cuauhtémoc Medina, Chief Curator of Manifesta 9, has noted in his introductory essay: "our hope is that the long historical perspective will attact a local audience in a region that has not customarily been a consumer of contemporary art, along with a number of scholars and the descendants of the miners that built the region." 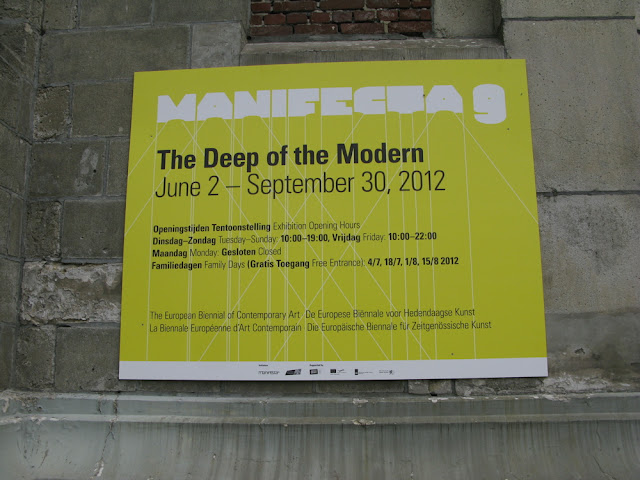 "Genk is a town built for the sole purpose of getting the black stuff out of the ground. Early in the last century, after geologist André Dumont discovered significant amounts of coal lurking in the area, something like 60,000 people moved in from various parts of the world to work in and around the pits, building several large-scale mining complexes with the town's modest amenities sprinkled around them. When heavy industry glaciers started moving out of Western Europe in the 1980s, Genk was left with a large useless hole right in the gut. The remaining fraction of the Waterschei mine (23,000 sq. m of it) is an involuntary witness to this process of de-industrialization, a derelict but beautiful and proud building. After Manifesta 9, or so it tells me in the press pack, it "will be redeveloped as part of a master plan to create Thor park (is this name a jolly wink to the Germanic god of thunder, I wonder), a business and science complex focusing on innovation and knowledge." 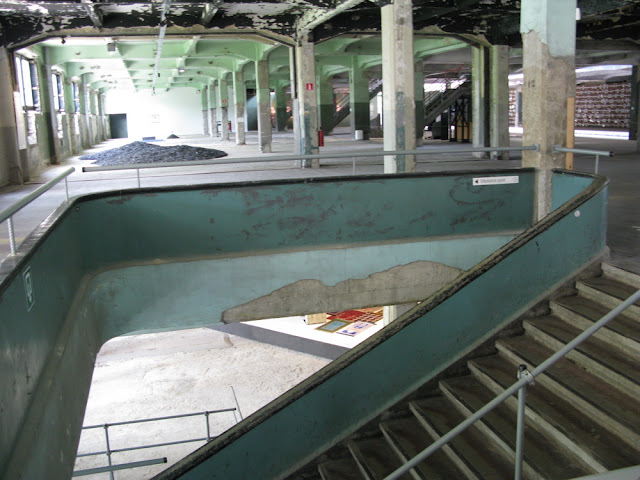 Stairs connecting the first and second floor of the Waterschei.
Kate Sutton's Artforum.com review also framed the loaded context: "Chief curator Cuauhtémoc Medina, together with co-curators Katerina Gregos and Dawn Ades, selected the Belgian province of Limburg, “a mini European Union” also known as “Euregio-Meuse-Rhine.” The region has spent much of this century heavily dependent on coal production, but, with the last mine closing in 1992, Limburg is now eager to transition to new technology. Once a kind of Emerald City for coal miners, the garden city of Genk provides the ideal venue with its massive, Art Deco–style André Dumont mine." 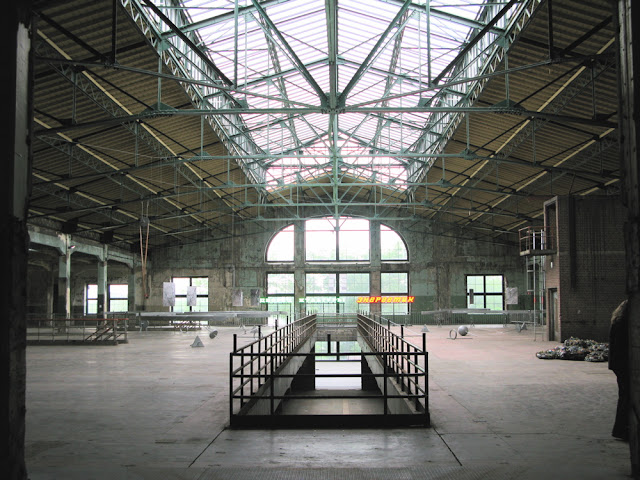 Top floor of the Waterschei building.
As Javier Hontoria noted in his El Cultural review, Medina wanted to concentrate everything in the Waterschei, "favoring the concept of "exhibition" versus the "festival", and consequently emphasizing the metaphor of the vertical versus the horizontal to the light of new economic systems." (...) "The idea of ​​strata" – he continues –  "so tied to the world of mining, backbones the sense of the exhibition, which, under the title "The Deep of the Modern", unfolds in a concise and accurate way throughout the three levels of the building."
As explained in the press kit, 'The Deep of the Modern' begins with '17 Tons' "an exploration of the cultural production that has been powered by the energy of memory that courses through the diverse heirs of coal mining in the Campine region of Limburg, as well as several other regions in Europe". 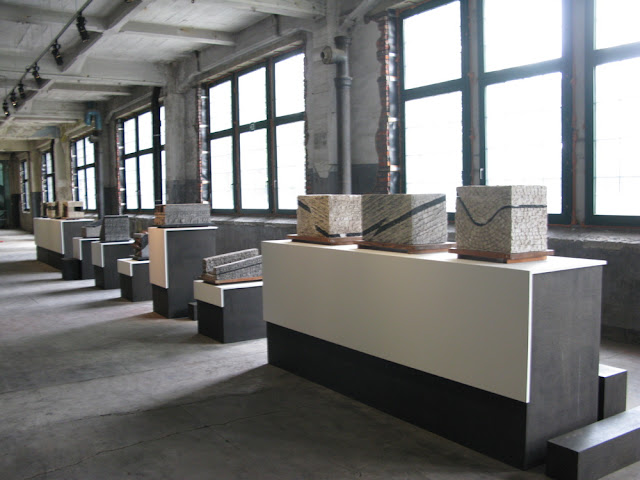 Models of the Underground from the 1950s, 3D representations used to teach 14–17 year old boys mining techniques and location of the coal layers. 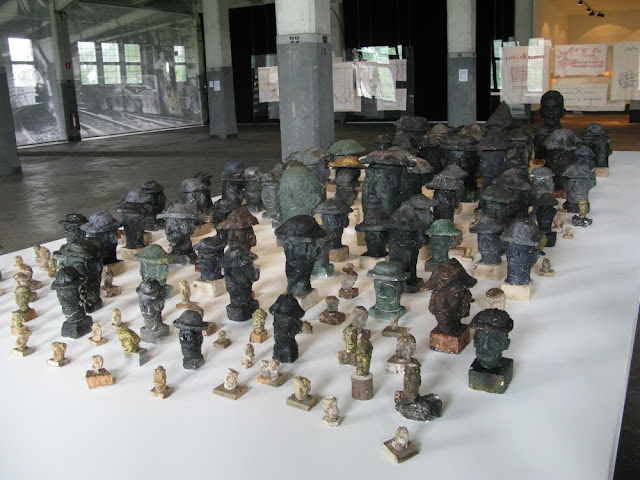 Works by Manuel Durán (an 82 yeard old self-taught artist and former miner for 19 years) who has been making "Miners' heads" sculptures since the 1950s out of potato pulp, coal, salt and paint. 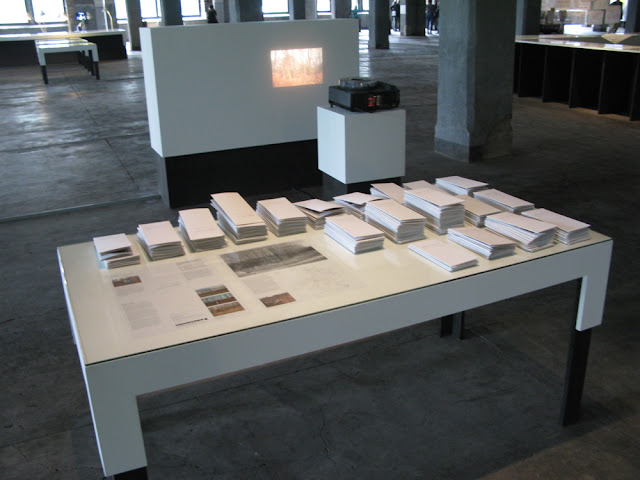 Lara Almarcegui, "Wasteland (Genk), 2004–16. More than 1 hectare of wasteland in public space." For the project, Almarcegui identified a neglected plot of land and scouted, surveyed and described the land. "Through negotiations iwth the City of Genk, Almarcegui arranged to protect the terrain from development for ten years (...). For Manifesta 9, the City of Genk agreed to extend the work for an additional two years and is currently in the planning stages of protecting it in perpetuity." (text by Steven Op de Beeck included in Manifesta 9 manual "The Deep of the Modern – A subcyclopaedia", Silvana Editoriale). Latitudes' visited the site back in 2007 (see blog here).
Continuing on the second floor we encounter 'The Age of Coal': "An art historical exhibition comprising artworks from 1800 to the early 21st century about the history of art production aesthetically related to the industrial era" (...) "organized into several thematic sections with artworks in which coal played an important role. Coal as the main fuel of industry, as a major factor of environmental change, as a fossil with significant consequences in the field of natural science, as the main referent of certain forms of working class culture and as a material symbolic of the experience of modern life". 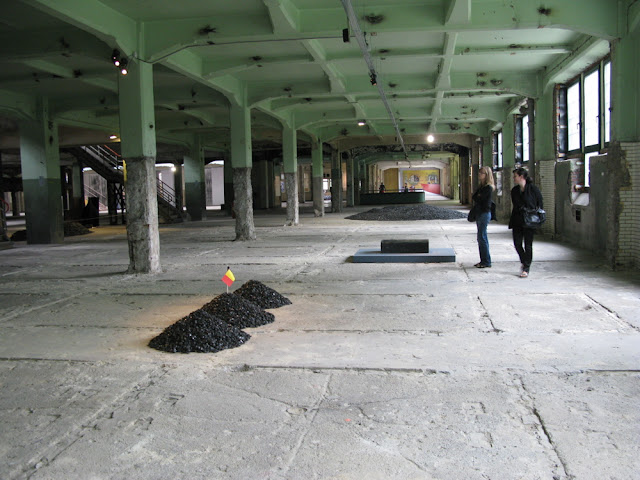 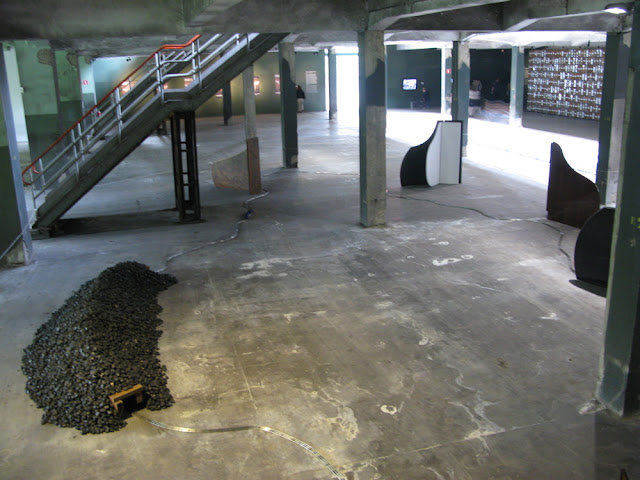 David Hammons, "Chasing the Blue Train" (1989) "focuses on the powerpul metaphor of the railroads that have tgransformed the landscape and socity of the US since the 19th Century." (text by Mieke Mels in Manifesta's "The Deep of the Modern – A subcyclopaedia", Silvana Editoriale). 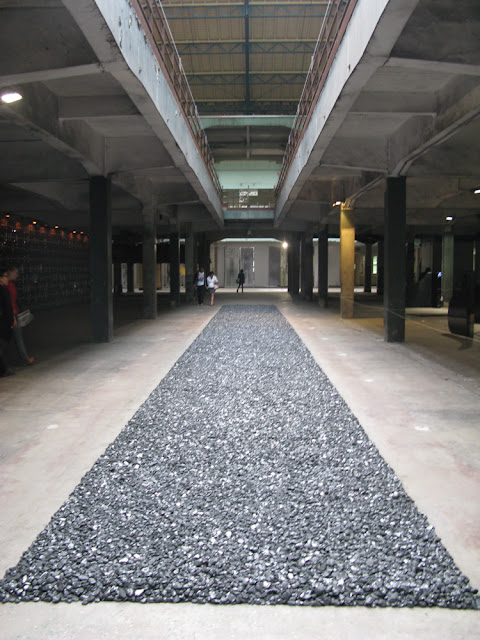 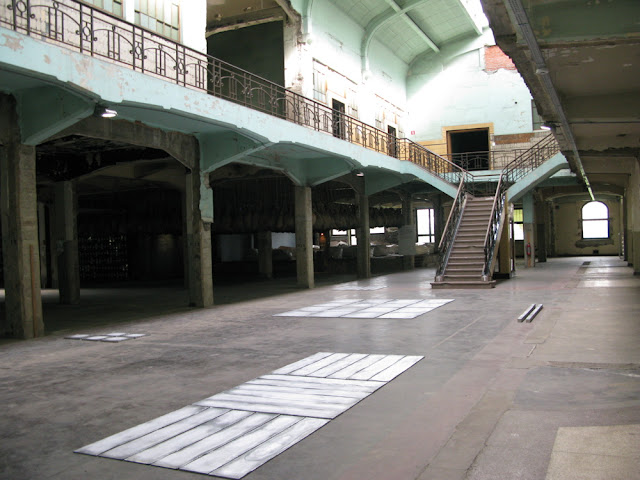 Rossella Biscotti, "Title One: The Taks of the Community", 2012. Biscotti also contributed with "A Conductor", 2012: On December 2009, the Unit 2 of the Ignalina Nuclear Poer Plant in Lithuania closed, consequently materials from the site were put up for auction. Biscotti acquired lead which have now been reused in Belgium into the new electrical wires to supply electricity for the show. She also acquired lead, which is the basis for her floor sculptures in the spectacular Sint-Barbara's hall. 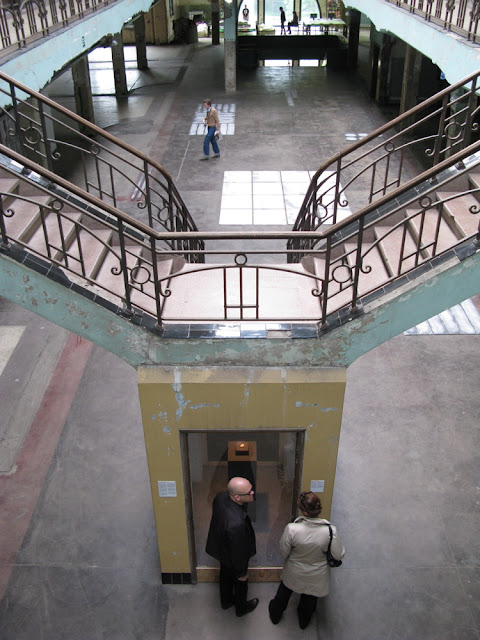 Antonio Vega Macotela (below) Study of Exhaustion — The Equivalent of Silver (2011), "a (failed) venture to export a “boleo” of coca leaves from Bolivian silver mines represented by a boleo-shaped piece of silver, roughly the amount of silver one miner gets out in a day" (Jonas Žakaitis in Art Agenda); and Rossella Biscotti (above).
Finally on the top floor, we find the section 'Poetics of Restructuring', with "contributions from 39 contemporary artists, focusing on aesthetic responses to the worldwide “economic restructuring” of the productive system in the early 21st century".
"This archetypal kind of socio-econo-political development from industrialization to de-industrialization to post-industrial capitalism—and the corresponding forms of production, geographies, and distributions of resources—is what Manifesta's contemporary art section, mostly on the third floor of the building, is about." (Jonas Žakaitis in Art Agenda) 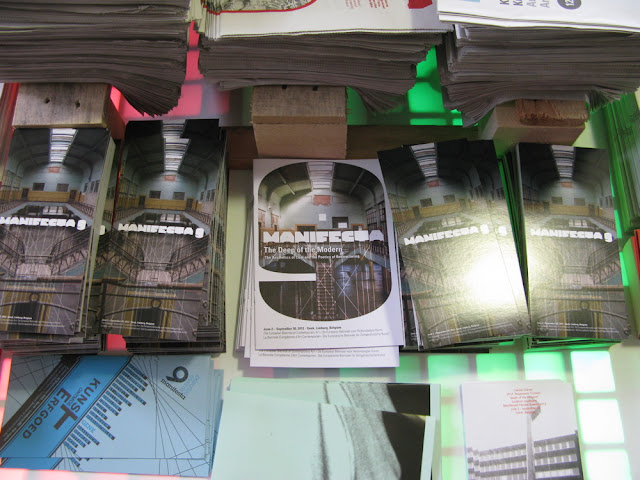 Manifesta educational materials and leaflets: "developed by the Manifesta 9 Education & Mediation department. There are 3 different 3x3 Newspapers for 3 age groups (12-, 12+ and 18+), so make sure you have the right one for you." 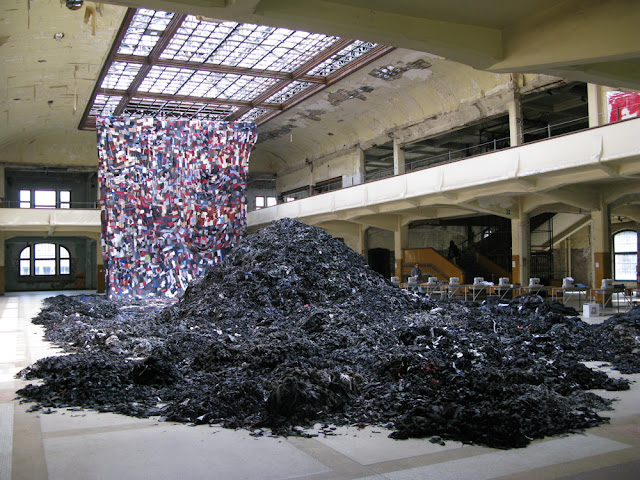 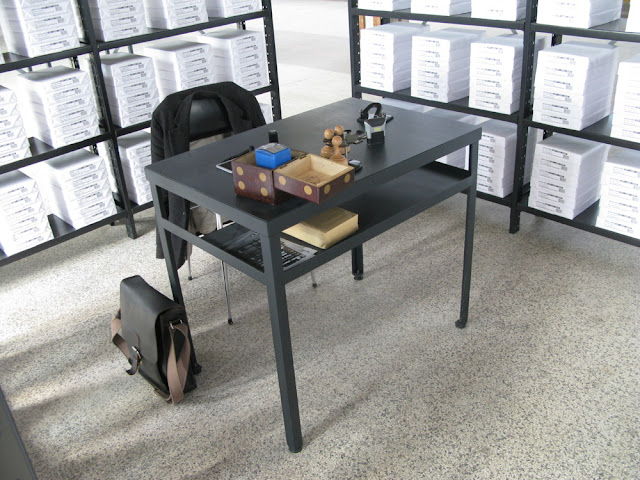 Ante Timmermans' "Make a Molehill out of a Mountain (of Work)" (2012), shelves full of packed A4′s to be manually perforated in his office space during the opening days to make a heap of confetti with the resulting paper, placed on a table at the opposite side of the room and overlooking the window that frames the also "perforated" mining mountain. This tiresome and repetitive administrative task concludes with stamping each of the perforated papers (with stamps designed by the artists) and filing them in binders placed in shelves. 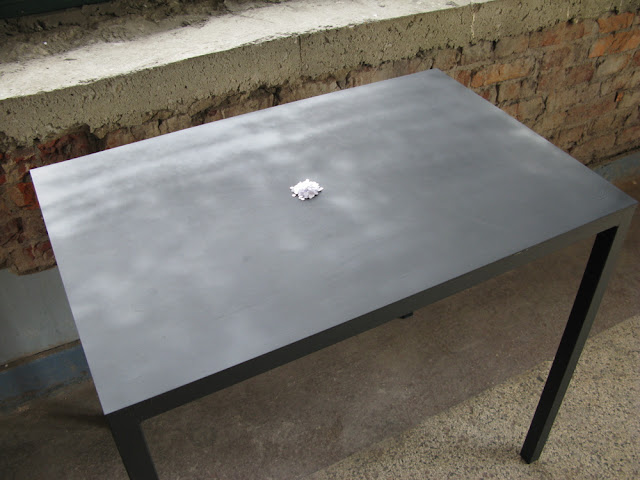 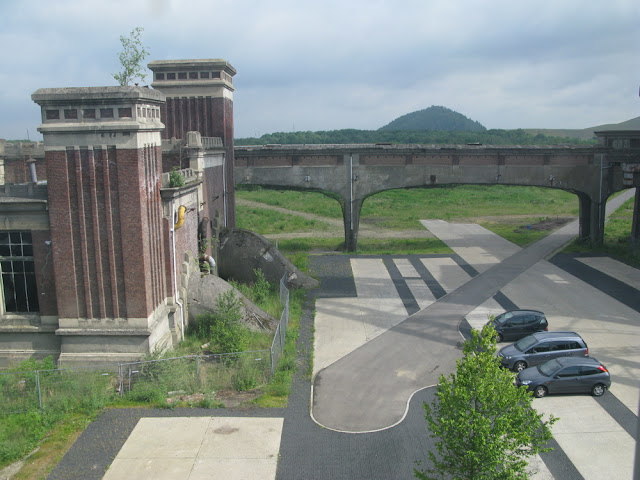 View of the landscape from Ante Timmermans' space and the remaining Waterschei building (not in use). 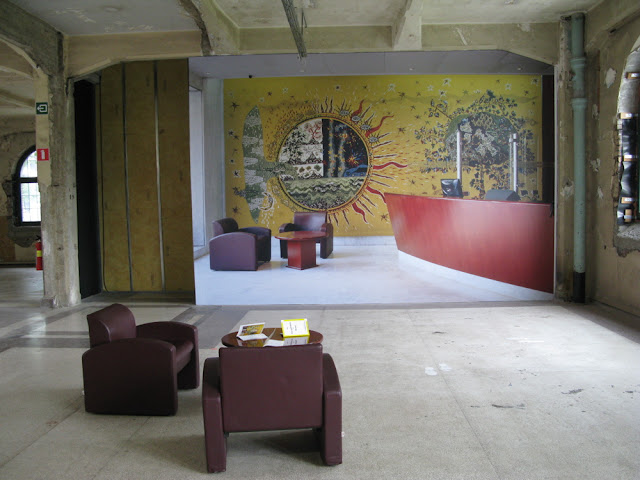 Goldin + Senneby's "The decapitation of Money", 2010. From the exhibition newspaper: "Goldin + Senneby and team test the hypothesis that Headless Ltd. (a mysterious offshore company registrered in the Bahamas) is a reincarnation of the secret society "Acéphale", founded by Georges Bataille and friends in 1936." 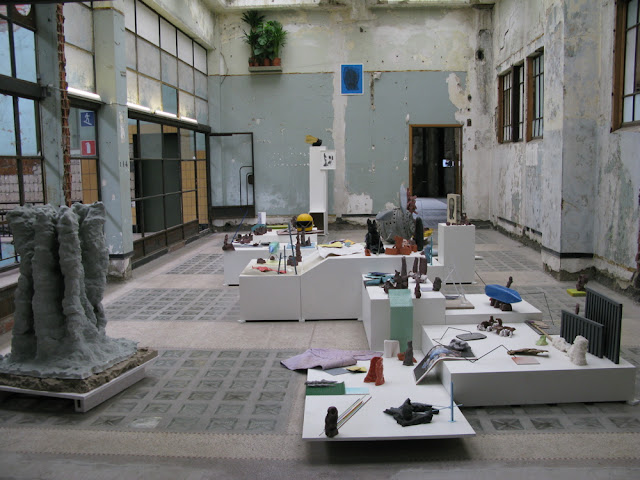 Emre Hüner, "A little Larger Than the Entire Universe", 2012. 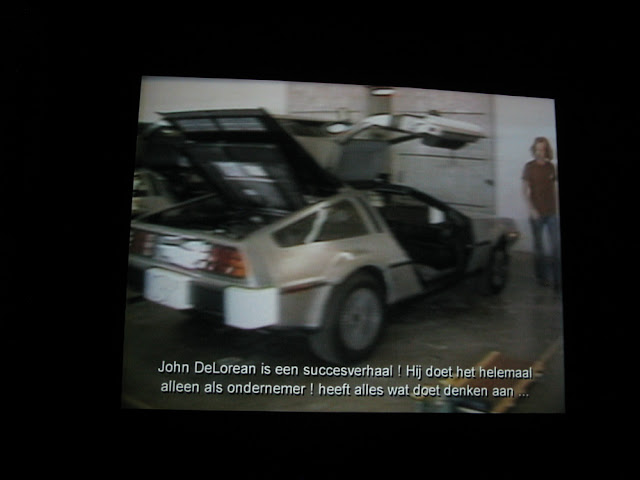 Duncan Campbell's "Make It New John", 2009, 50' video. Depicting the "history of the DMC-12, the extravagant, futuristic automobile created by American engineer and entrepeneur John Delorean (1925-2005). Campbell documents the strange attempt to use its production as a tool of social engineering. Relying heavily on archival footage, and incoporating a few staged scenes that introduce a political and biographical allegory, Campbell attempts to construct a panoramic view of the polar extremes that have characterized the social life of this icon of consumerism." (text by Cuauhtémoc Medina in in Manifesta's "The Deep of the Modern – A subcyclopaedia", Silvana Editoriale)
Back to Žakaitis analysis: (...) The weird part though is that all of these things, displayed in a generic and anemic way, are fenced from Mijndepot Waterschei, a full-blown and fully functioning museum assembled by former miners themselves back in 2004. Be sure to go there if you visit this Manifesta, and check out hundreds of mining tools, helmets, saint statues, a small train, and a 1:1 scale model of a coal shaft: great stuff that can get you really sooty. 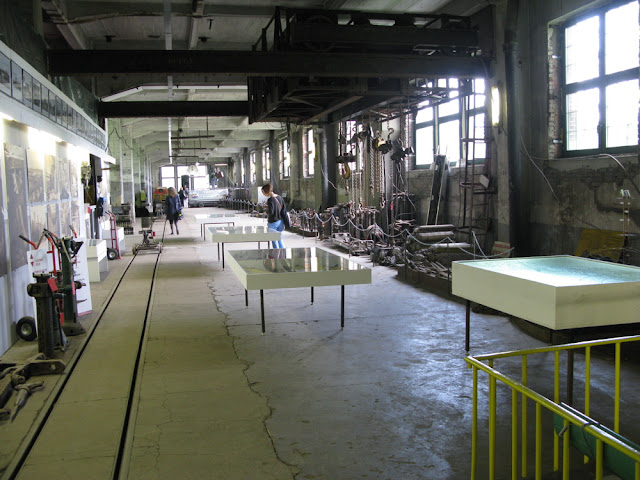 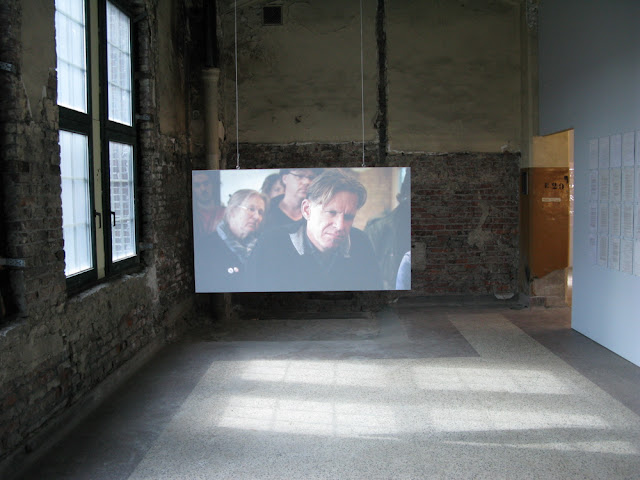 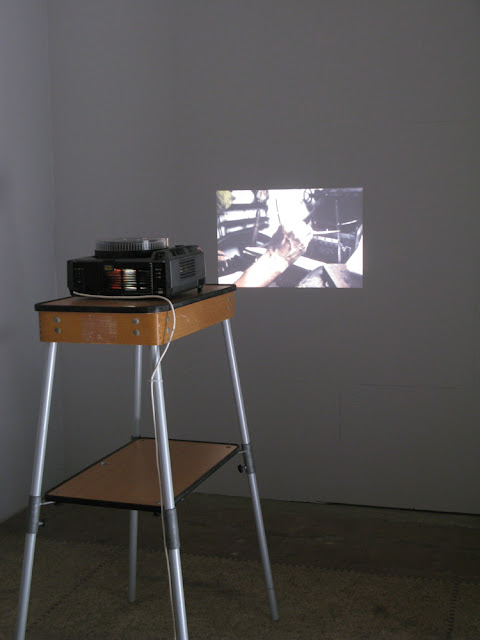 Praneet Soi's slideshow "Kumartuli Printer, Notes on Labor Part 1", 2010, which "parsed out the gestures of a printer's hands as he interacts with an ancient pedal-operated press in Calcutta. As the operator feeds paper into his anachronistic machine, it spits out grainy, high contrast images of his own hands, immersed in labor" (text by Cuauhtémoc Medina in in Manifesta's "The Deep of the Modern – A subcyclopaedia", Silvana Editoriale). 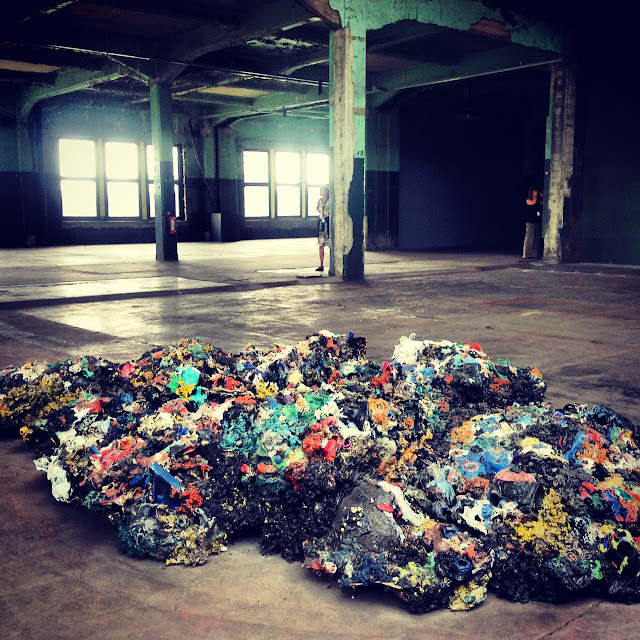 Maarten Vanden Eynde, "Plastic Reef", 2008–12: a collection of melted down plastic trash collected while swirling in the Pacific Ocean. For more info see his comprehensive website.
As for the publication "The Deep of the Modern – A subcyclopaedia" (Edited by Silvana Editoriale), the curator writes that it has been "designed to suggest the complexity of meaning involved in the whole project as well as the richness of the individual elements themselves. (...) We have chosen to publish a book that breaks from the mould of conventional exhibition catalogues. We evoke the form of the encyclopaedia as a means of organising a whole made up of multiple unities (...). This Subcyclopaedia will thus serve as a record of the research process behind the biennial. (...) Our neologism is meant to suggest a comparison between the use of this reference book and the exhumation of modernity's underworld in the heritage, culture and history of coal mining.". 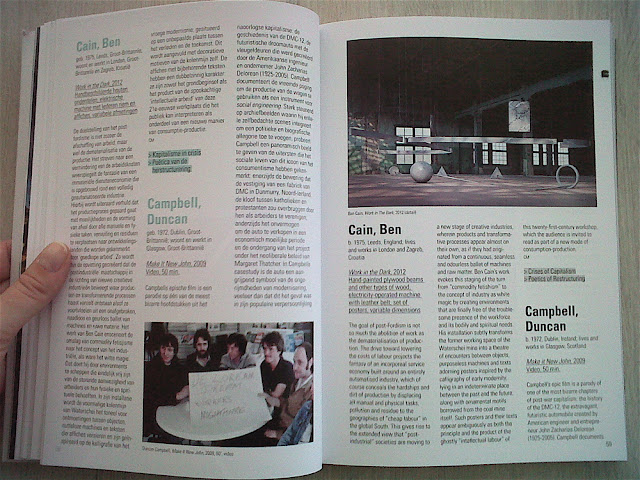 One of the pages of "The Deep of the Modern – A subcyclopaedia" (Edited by Silvana Editoriale).
Despite this intention of "breaking the mould", the 320-page book does include the traditional institutional forewords (to be precise, four) and an introductory curatorial essay by Medina. Many other texts are disseminated throughout the publication, which is organised in alphabetical order A to Z, mixing concepts (starting with "Accumulation", ending with "Underground as Hell"), with artist texts by a network of over 30 writers, and essays by Gregos ("Poetics of Restructuring: On the question of production in the contemporary section of Manifesta 9") and Ades ("The Age of Coal: An Underground History of the Modern"), amongst other long form texts (by Medina himself, Svetlana Boym, as well as misfit entries such as "The Legacy of Manifesta" by Hedwig Fijen). 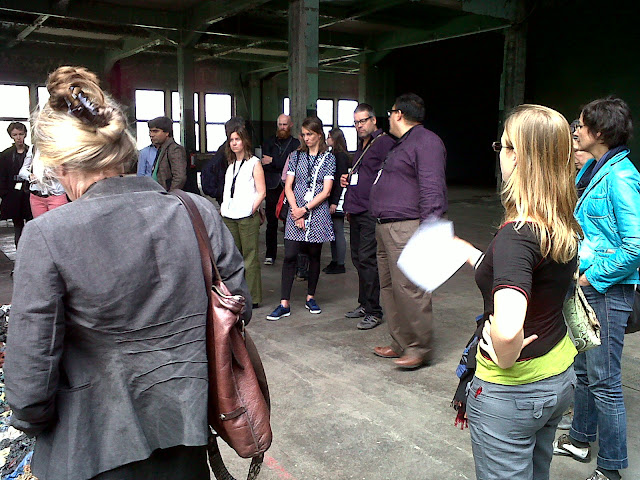