26 Aug 2013
Below Max Andrews' review of Julia Montilla's exhibition, 'El "cuadro" de la "calleja"', presented between February and April 2013 at the Espai 13 of the Fundació Joan Miró in Barcelona. Text was first published in the Issue 156 of frieze. 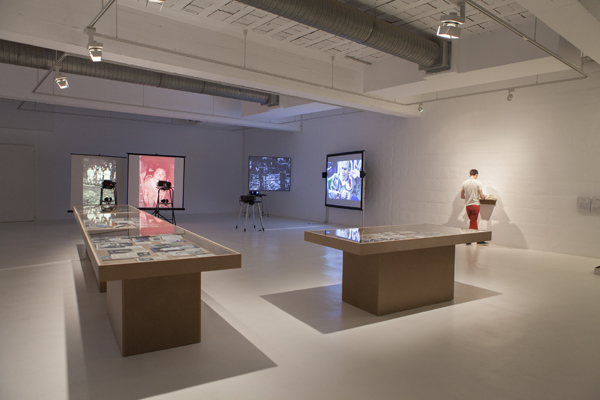 View of the exhibition at Espai 13. Courtesy of the artist and Fundació Miró.
Julia Montilla’s exhibition documented a minor miracle: between 1961 and 1965, in the tiny Cantabrian village of Garabandal, four young girls allegedly received repeated supernatural visitations from the Virgin Mary and were entrusted with her prophesies. However, the so-called Garabandal apparitions are not recognized by the Vatican, though they continue to be championed by a sprawling network of international enthusiasts. Montilla documented the visions – or, rather, documented their documentation – stressing how the beholding of physical testimony can access a vast surplus of politics and patriarchy, belief and body language.

Montilla was not primarily concerned with debunking the girls’ visionary experiences. Instead, the exhibition’s four annotated display cases (La construcción de una aparición, The Construction of an Apparition, all works 2012–13) – containing books, magazines, proselytising pamphlets, religious journals, collectors’ postcards, slide-lecture packs sold by ‘Garabandalist’ organizations, and so on – contextualized them with a forensic attention to how they were produced and publicized through photography. The girls’ theophanies and trances could be understood, it was proposed, as site-specific performances in a post-Lourdes tradition of remote ‘scheduled apparitions’. A monitor looped a 1971 television documentary, while an overhead projector beamed a 1994 newspaper article reporting that Hollywood were set to dramatize the autobiography of Conchita, the most precocious of the ‘seers’ (three of whom left Spain for the US in the 1970s) and that Luciano Pavarotti would sing the theme. Two slideshows entitled Soportes vivientes para la fabricación de un mito (Living Supports for the Fabrication of a Myth) were accompanied by Montilla’s commentary and, along with Garabandalistas, a new publication edited by the artist, compiled dozens of archival shots of the girls’ ecstatic night-time walks, taken by various amateur and professional photographers. Staring fixedly up into the beyond, offering crucifixes and rosaries, conversing with the divine, or open-mouthed to receive invisible communion, the girls are portrayed clasping their hands together or individually writhing on the ground, stupefied by Marian divinity, and all the while seemingly oblivious to the crowds, microphones and lenses around them. 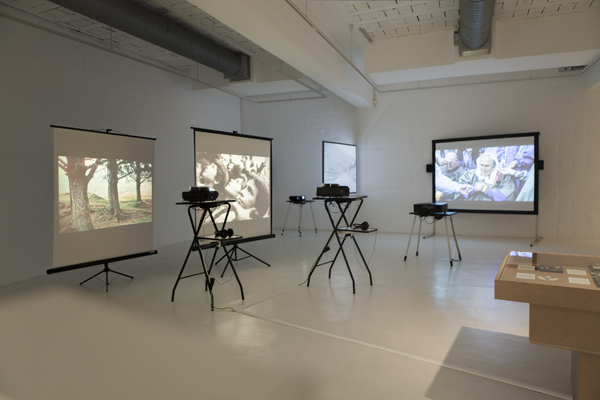 View of the exhibition at Espai 13. Courtesy of the artist and Fundació Miró.

Tracking the emergence of ‘trance photography’ as a cult genre, Montilla considered how the documentary materials themselves have acquired venerated status as certificates of veracity. The quirk that some of the projected archival images had been noticeably pixelated in their to-and-fro from print to analogue display seemed like a confession of sorts, of Montilla’s own evident hand in their ongoing dramaturgy, here in an artistic context.

In the visionary events’ shift of emphasis from the small street where the first apparition was said to have appeared, to embrace the ‘epiphanic landscape’ and pious tourism throughout the entire context of the village, Montilla’s voice-over and captions proposed how the performances conformed to the expectations of naive and spiritually pure rural life, where hoax or conspiracy would be unthinkable. Through astute bibliographic research and juxtaposition of source materials with commentary, the apparitions’ enthusiastic casting as an apocalyptic warning was shown in its entanglement with the Franco dictatorship’s demonization of Communism and the left. Furthermore, as a sign that Spain’s peasantry had been chosen as spokespeople of God without the middlemen, Montilla articulated how the folkloric fervour of the apparitions’ thronged crescendo in 1965 would have spurned the concurrent doctrinal reforms of the Second Vatican Council. 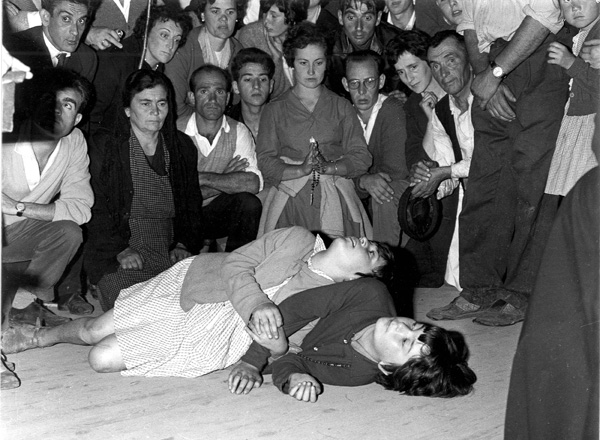 From "Soportes vivientes para la fabricación de un mito" (2013). Courtesy of the artist.
Yet, Montilla’s bravest and most calibrated area of enquiry intimated how the moving imagery of the girls’ rapture established a legendary motif for the performing or occupied female body as an index of radical obedience, even to the extent of self-harm. Correspondingly, the two screens of El contagio visionario (The Visionary Contagion) and Ídolos y ídolitos (Idols and Lesser Idols) showed fragments of a 1961 film of the entranced girls alongside a video shot by the artist in Garabandal in 2012, showing a muttering woman devotee supposedly in a trance herself. In urging feminist questions about Garabandalism seemingly as a form of infectious hysteria, Montilla echoes Elaine Showalter’s 1997 study Hystories: Hysterical Epidemics and Modern Culture in which alien abduction and – more controversially among other case studies – Gulf War syndrome, are interpreted as fictional epidemics propagated through support groups, popular magazines, talk shows and the Internet. Whether the seers and believers of the apparitions reflect extreme symptoms of cultural anxieties and traumas, as Showalter would argue, or represent exultant communiqués from the Blessed Virgin, Montilla carefully beseeches that we must still pay attention to what they continue to tell us.

This is the blog of the independent curatorial office Latitudes. You can also follow us on Facebook and Twitter.
All photos: Latitudes | www.lttds.org (except when noted otherwise in the photo caption).
This work is licensed under a Creative Commons Attribution-NonCommercial-NoDerivs 3.0 Unported License.
2013, Barcelona, Espai 13, Frieze, Fundació Miró, Julia Montilla, Max Andrews, Reviews 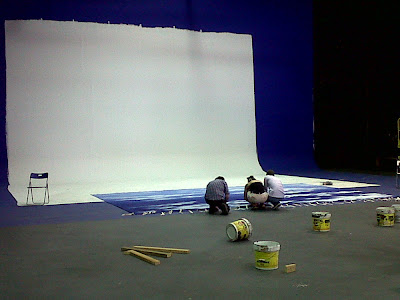 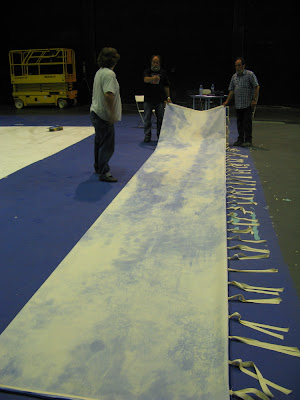 Today was the last day of Christodoulos Panayiotou's (1978 Limassol, Cyprus) temporary event in Estudios Gala, a film studio in Barcelona that has remained opened this past week while Panayiotou's production for the forthcoming show at Fundació Miró, 'You are not alone', was taking place.

Panayiotou proposed to produce a theatre backdrop of a sky which has been painted by professional scenographers over this past week. As with pieces such as The End (2009) or a series of works with existing historical theatre backdrops, the piece will be shown lying on the floor and folded, presenting 'the absence by its negative presence'. It is accompanied by a silkscreened poster that reads 'N O W H E R E' and below the dates and the place of production (11–16 June, Estudios Gala). 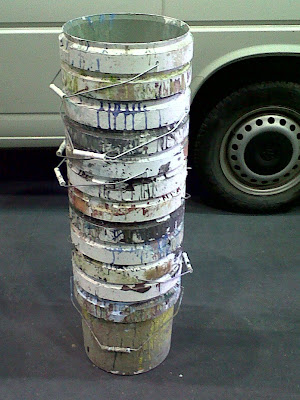 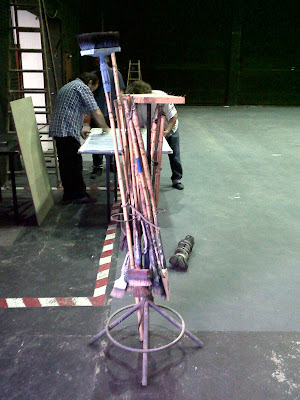 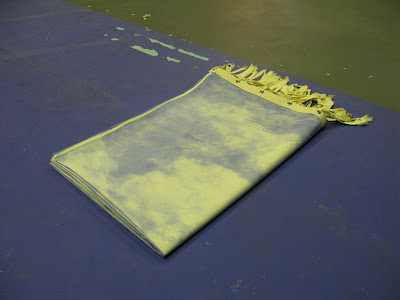 (From the press release) "In 'You are not alone', 14 artists help to fight stigmatisation by reappraising the causes, consequences and current context of Aids as well as the ways of fighting it." The exhibition is produced by the ArtAids Foundation, founded and presided by Dutch-born Barcelona-based philanthropist Han Nefkens who, besides this new work by Panayiotou has facilitated the production of the work of eight more artists whose work does not generally address the subject of Aids: Deimantas Narkevicius (Lithuanis), Latifa Echakhck (Morocco), Danh Vo (Denmark/Vietnam), Lorena Zilleruelo (Chile), Lucy & Jorge Orta (UK and Argentina), Antoni Miralda (Spain) and Elmgreen & Dragset (Denmark and Norway).

The exhibibition will travel to the Museo de Arte Contemporánea de Vigo (MARCO) from October 21. 'You are not alone' is curated by Hilde Teerlinck, director of FRAC Nord-Pas de Calais/Dunkerque with Irene Aristizábal as assistant curator.