On documenta 12, Saab and the list of participating artists 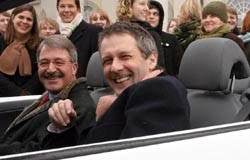 The fourth documenta 12 Leitmotif?:
"Real coolness comes from within: on the outside, my car shows the formal elegance and effortlessness of a white cloud."

And here is the suspected artist list, now also on the German documenta 12 wikipedia page, uncovered a few weeks ago by artnet's Ludwig Seyfarth's detective work.

"To those interested in the Basin of the Gulf installation at the 8th Sharjah Biennial (2007), in the Expo Center: here is a plan of the installation, with items numbered, and a price list for realization of the items on site. The prices are based, for larger site projects, on satellite investigations into similar-scale constructions, and, for smaller site projects, on prior budgets which I had prepared. Inquiries are welcome on all modeled and budgeted projects. Contracts are welcome, too. I am ready to discuss these estimate prices and project schedules with engineering and regional-planning firms in the area. The large figures are based on consultations with engineers during the years of satellite monitoring of similar-scale projects in the Arabian Gulf Basin and elsewhere. The small figures given are based on earlier project budgets."
ARABIAN GULF INTEGRATION ROOM AGIR Meaning, in French, “to act”.
Displaying how to make a cohesive whole of the Arabian Gulf as a basin.
DRAFT PRICE LIST
1. Convex-Disc Ramp Stepdown, near Birecik, Turkey $300 MILLION
2. Wadi el Batin Cut-Through $800 MILLION (using aircraft)
3. Karun River Zig-Zags $1 BILLION (undershot waterwheels)
4. Nafuds cut with Multi-channel canals $300 MILLION
5. Sea-level Flushing, into UAE, or even to the Umm as Samim $1 BILLION
6. Offshore Biomass Rig: Gracilaria $100,000
7. Satellite assessment of marine bioproductivity using SeaWiFS data, through Global Feed $20,000
8. Cones, Cages and Wallows near Salt Pans (Sabkhas) $150,000
9. Flushing out Alluvial Fans at the Head of the Gulf Based on satellite assessment of Iraqi projects $2 BILLION
10. Convex-Disc Marsh Zig-Zag Strcture, for mountains $300,000
11. Wadi Yudayyah Hydrometric Area, site for projects Example: clearing the mouth to yield seagrass $20,000/month
12. Feather-Production Sequence, from urban wastes Example: keratin dispersion in swamps or oases $10,000/month
Dispersed throughout space. Undershot Waterwheels, to replace hydroelectric dams $20,000 per test
Inshore Biomass Rig: Microalgae $20,000
Peter Fend, Sharjah Biennial 8, United Arab Emirates

Via Sarah Rich at Worldchanging...


"If you teach an actor to farm, and you give him two acres and tell him to work the land, is he acting or farming? Is it performance art or food production? For artist David Levine, this is a riddle for which all answers are correct. His current project, Bauerntheater ("farmers' theater"), recently began its season in Brandenburg, in northern Germany. Levine trained an American actor in farm technique for one month in New York, as any director would rehearse a show, then flew the actor to Brandenburg for the debut. Bauerntheater will run continuously for one month, during which time the actor-turned-farmer will cultivate two acres of potatoes, "in character," for fourteen hours per day..."

Swab 07, the first edition of Barcelona's Contemporary Art Fair – and the only one with the misfortune of being named after "an absorbent pad used in surgery" – ends today. "There is a sweeter way to experience an Art Fair" it declares-threatens on the bizarrely overpriced small catalogue (€19.90).

Besides the title clanger, there were some to-be-expected teething problems – or foot-shooting episodes – not least a lack of 'mission statement' about what niche in galleries or art works was being showcased (mostly unconvincing painting?), and a press department that seemingly does not read e-mail.

The crowning pratfall (you can never mix in too many metaphors it seems) is left to the 'Swab in Barcelona' catalogue text wherein we read a gushing comparison of the fair to ... a festering death-ridden cannibal shipwreck: "Swab presents itself this year rather like Théodore Géricault's 'Raft of the Medusa', which recognises the hectic confusion in the present day art market, at the same time embarking upon the event with sufficient vigor and optimism to position itself literally on the raft's elevate vertex, creating hope for the living, Barcelona's revival presented in a showcase of all this city's incredible works, literally on the pinnacle of the art market." Quite. Let's see which of the 42 galleries hang on for next time. 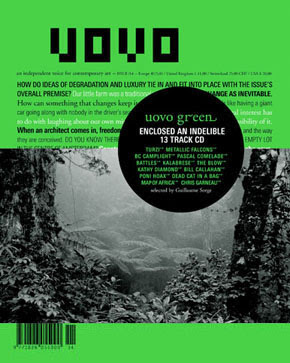 In the meantime, have a look at the issue 13 which was just launched in Berlin! 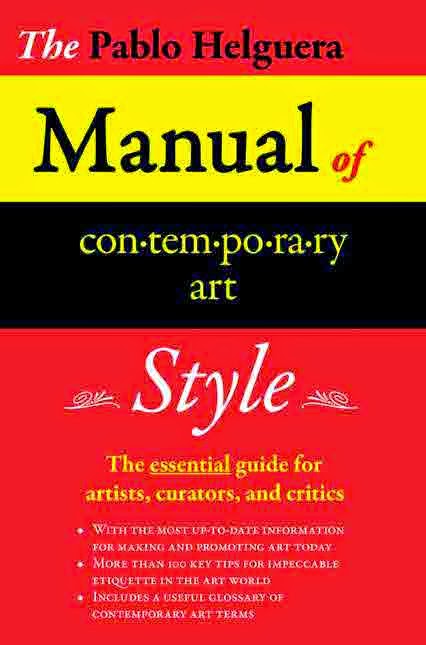 'The Pablo Helguera's Manual of Contemporary Art Style' offers an ironic, insightful, and humorous look at the inner social workings of the contemporary art scene, while functioning at the same time as an accurate and useful etiquette manual for understanding the intricate professional dynamics that take place in the art community today.

Everyone should read it! It even includes a diagram of the ideal choreography for an artist at an opening; a 'Chart of Sentimental Relationships' (i.e. artist with artist = acceptable, curator with museum director = problematic; artist with art dealer = unacceptable) and a memorable glossary describing:

"Gesamtkunstwerk: Any project by Matthew Barney, or any art project with a budget of 5 million dollars or more."

"Public Art: Cultural tradition consisting of commissioning artwork that would take as much space as possible in an urban environment, so that they can be restored and preserved by future generations."