Reviews of the exhibition "4.543 billion. The matter of matter" at the CAPC musée, Bordeaux

19 Jan 2018
As the ‘4.543 billion. The matter of matter’ exhibition concluded on January 7, 2018, at the CAPC musée in Bordeaux, we finished archiving all the social media posts visitors, the museum and ourselves have published – see our Wakelet feed below – since research phase to the exhibition itself, and below share the most relevant print and online reviews. 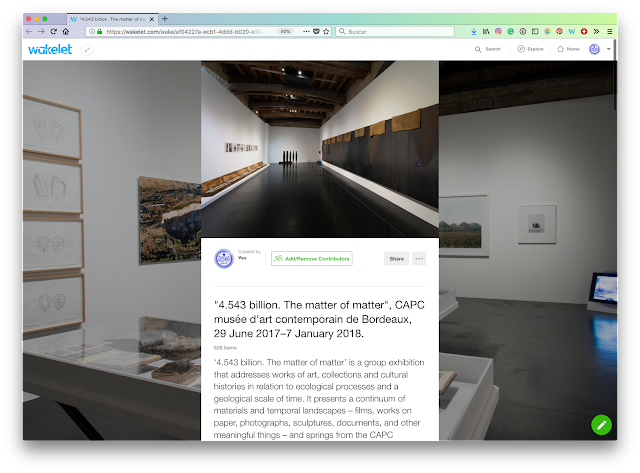 Wakelet collection of the "4.543 billion" exhibition.
December 8, 2017: Tom Jeffreys highlighted the exhibition in his "Looking Back: Paris" roundup for frieze magazine – illustrated with two works included in the show by Nicholas Mangan and Alexandra Navratil.

"A little less academic, but no less rigorous, was ‘4,543 milliards’ (4,543 billion), curated by the Barcelona-based Latitudes (co-founded by frieze contributing editor Max Andrews) at CAPC, Bordeaux. Subtitled ‘The matter of matter’, the exhibition provided a material, geological and political response to the building’s former life as a warehouse for colonial commodities and, by extension, the complex entanglement of culture, money, politics and ecological impact. Marble from Trump Tower (Amie Siegel’s "Strata", 2017) was exhibited alongside partially-burnt documents rescued from a fire at the Bordeaux municipal archives and a 1939 mock invitation to the ‘Museum of Standard Oil’, actually MoMA’s new building, issued by the then-publications director, Frances Collins (unsurprisingly fired soon after). Combining archival materials with work by 30 artists, big ideas with specificity and nuance, this was exactly the kind of exhibition I would want to return to again and again. If the selection of the next artistic director the Venice Biennale were a democratic process, I’d be voting for Latitudes." 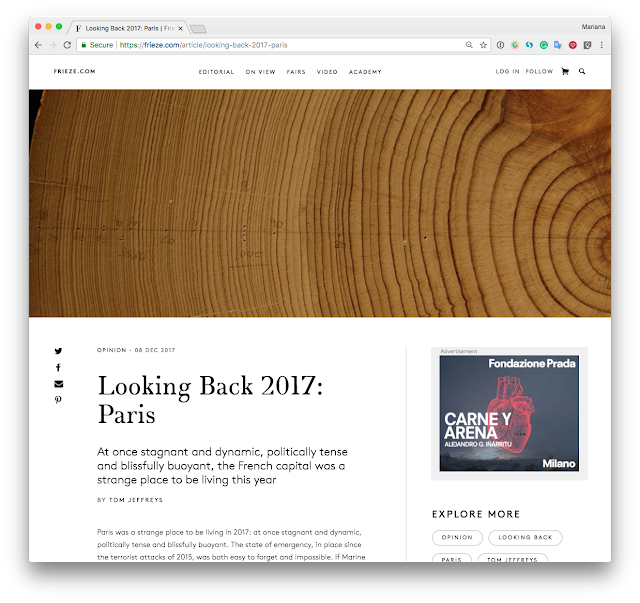 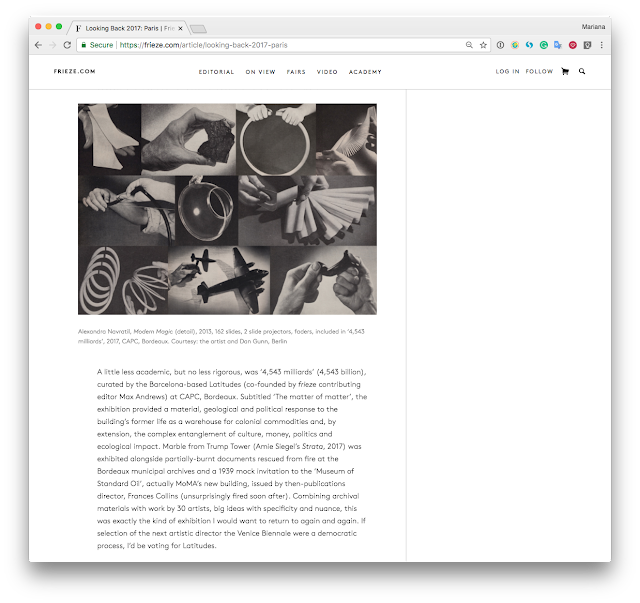 November 28, 2017: Frank Browning, Paris-based Contributor to the Huffington Post author, and former NPR Correspondent, reviewed the recently opened retrospective of Beatriz González and concluded his article with a short mention:

"Meanwhile, around the corner at CAPC there’s an intriguing assembly of stones, papers, paintings, photographs and projections that unite geo-physics, sculpture, and art history, including the conversion of the building itself from a one-time commodities warehouse into its current life as a museum.

Entitled “The Matter of Matter,” [missing "4.543 billion" years, the age of the Earth, and the first part of the exhibition title] it includes the work of 30 artists, assembled and mounted by a Spanish team, Max Andrews and Mariana Cánepa Luna. They call themselves Latitudes [wrongly published with two "T"]; they aim to excavate the world we inhabit daily, be it through the history indigo mining in Mexico and southern France (vital for fine pottery and coloring bluejeans) or oil extraction in Venezuela, gas infused sculptures or open pit diamond mining in southern Africa. All that we do, all that we eat, all that we create derives from one form of excavation or another. Simple truism as it may seem, Latitudes takes us into the intimacies of our relation with this earth and calls us to meditate on our physical and aesthetic relation to the steadily warming round rock that is our home." 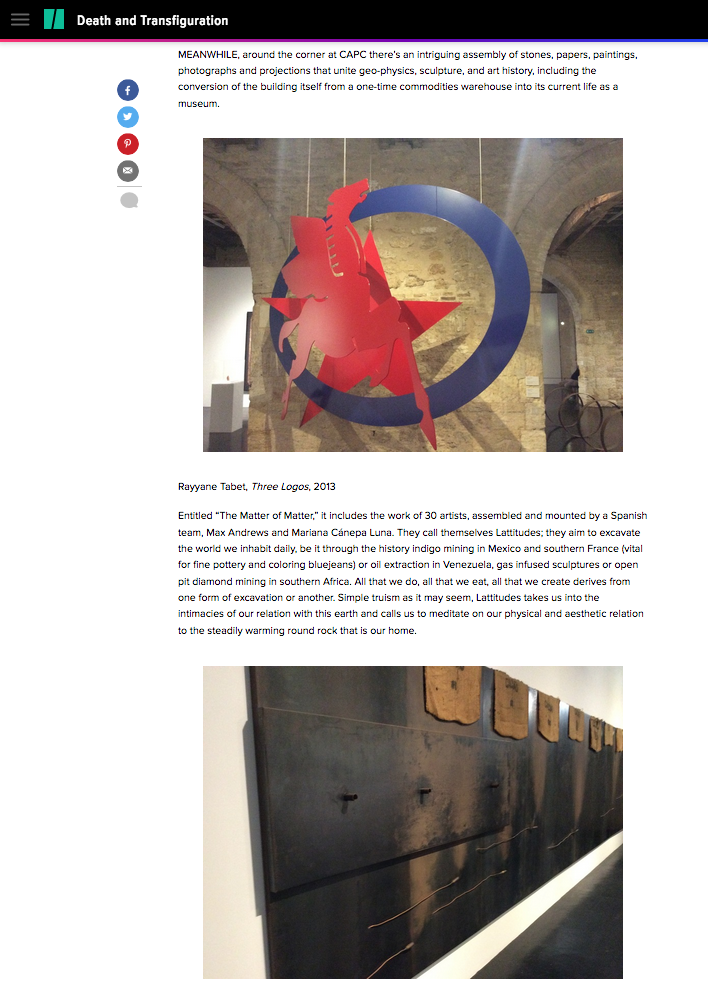 September 20, 2017: Emmanuel Labails of RCF Radio did a 9-minute interview with Pedro Jiménez Morras, Head of Press of CAPC, who discussed the premises of the exhibition and some of its works. (Listen between minute 4:39 and 13:36). 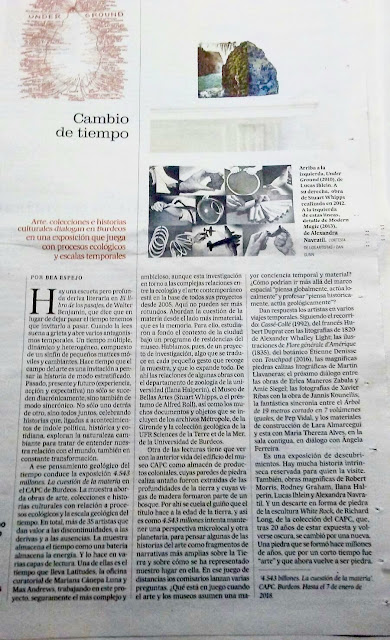 July 12, 2017: Catherine Darfay's ‘Le CAPC remonte le temps’ on the local newspaper "Sudouest", was the first feature. The article was illustrated with a with an image showing Amy Balkin's ‘Today’s CO2 Spot Price’ (2009) chartering the daily price of carbon dioxide emissions allowances in the world’s largest carbon market —a changing value documented in this blog post. 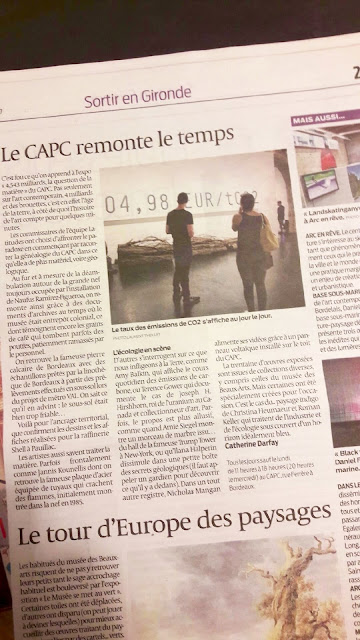 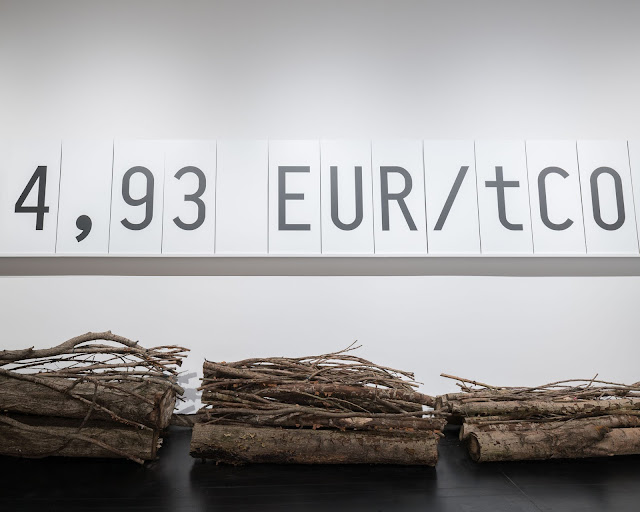 Installation of Amy Balkin's ‘Today’s CO2 Spot Price’ (2009) on the opening day, 29 June 2017. Photo: Latitudes/RK.
Throughout the course of the ‘4.543 billion. The Matter of Matter’ exhibition at the CAPC musée in Bordeaux, the work by Amy Balkin (Baltimore, Maryland, 1967. Lives in San Francisco) ‘Today’s CO2 Spot Price’ (2009) charted the daily price of carbon dioxide emissions allowances in the world’s largest carbon market, the EU Emissions Trading Scheme. The numbering system was manually updated every morning to show the price in Euros of an entitlement to legally emit one metric tonne of CO2. Polluters—power plants or factories—receive or buy emissions allowances at auctions and trade them as needed to minimize costs.

A product of the increasing dominance of the finance sector and the expansion of financial derivatives that emerged in the 1970s, the carbon market ‘fix’ has abstracted the qualitative problem of climate change mitigation into a commodity market based on a molecule treated as the singular cause. There is a trend towards emissions that can be lucratively ‘avoided’, while there has been little effect on structural fossil fuel dependence. In this perspective, global warming is a market failure that can be corrected by governing the atmosphere via an economic instrument with no real material or historical reference.

Balkin's piece was presented alongside works by Pep Vidal, Lucas Ihlein, and Lara Almarcegui, all focusing on humans' calculations and quantification of nature and its progressive abstraction.

—Latitudes
(Text from the exhibition guide) 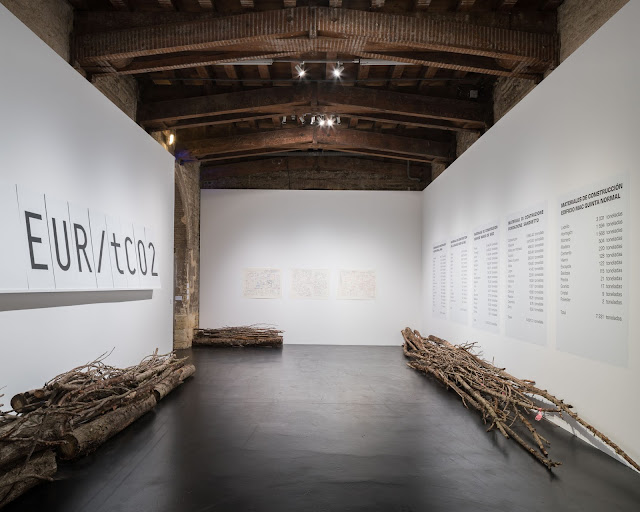 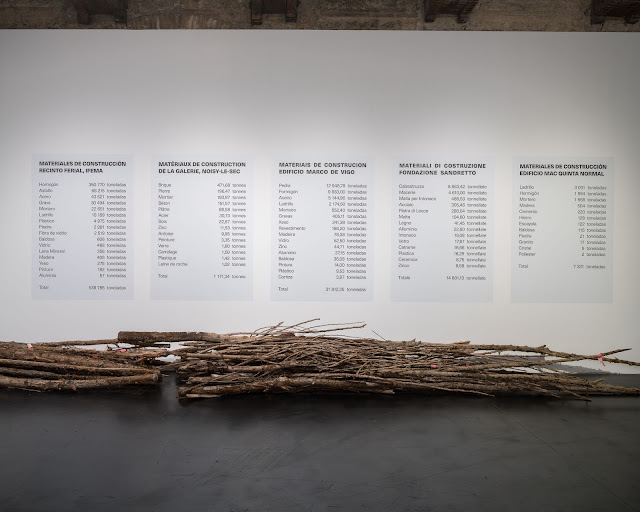 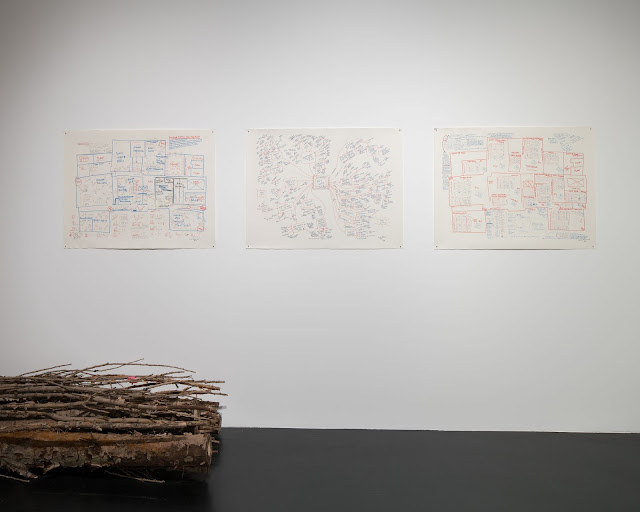 Prints by Lucas Ihlein (wall) and part of a tree by Pep Vidal (floor). Photo: Latitudes/RK.
Below a sequence of all the social media posts (mostly from Instagrammers, more on this and other works on this Wakelet feed) showing the ongoing flux of its price—which has ranged from 4,84 Eur per tonne of CO2 during the installation of the piece, to 4,93 Eur on the opening day (29 June 2017), to the last picture on record showing a whopping 7,76 Eur per tonne of CO2.

We would like to thank the KADIST in San Francisco for having given us the opportunity to, after years of corresponding over email, finally meet Amy during a residency in September 2015. Her "Incidents of Travel" day on several locations in and outside San Francisco (download the specially-commissioned itinerary here) was invaluable towards the conceptualization of this exhibition. 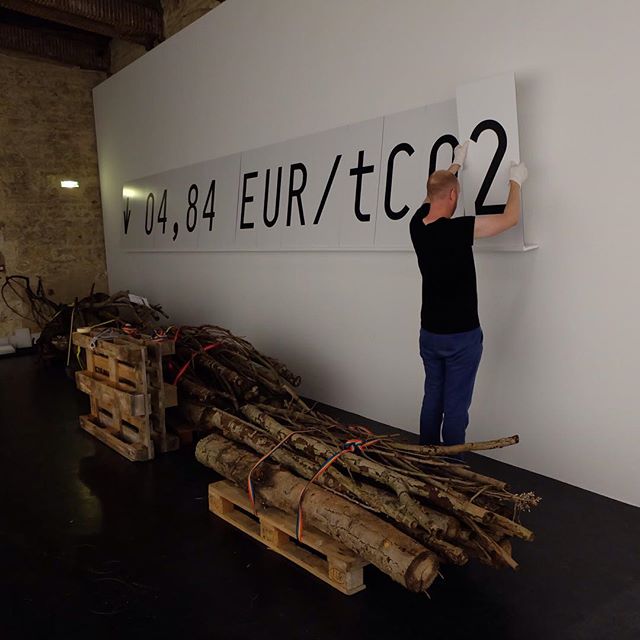 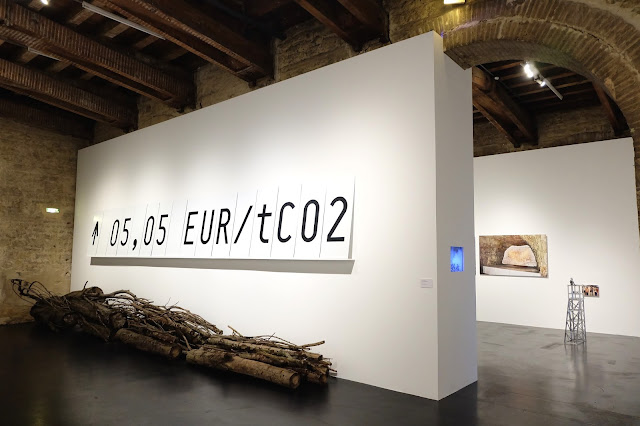 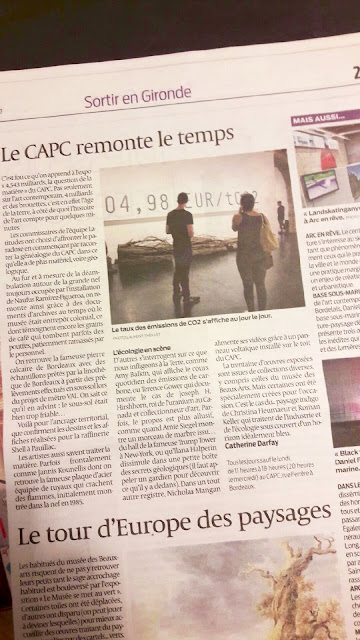 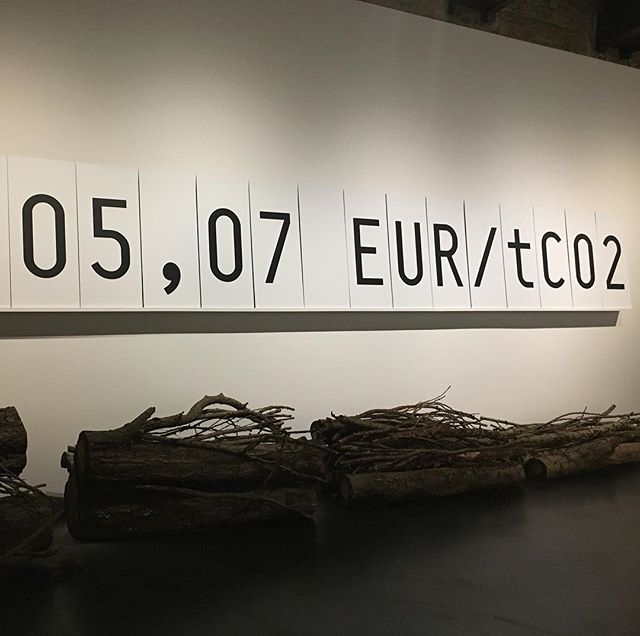 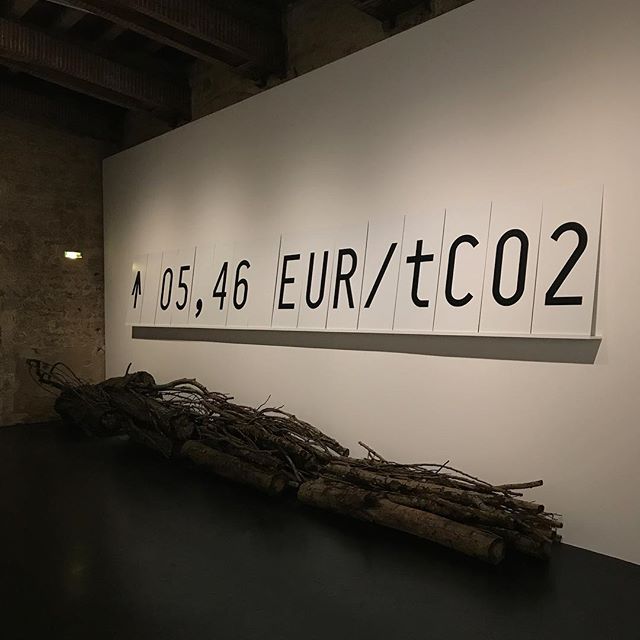 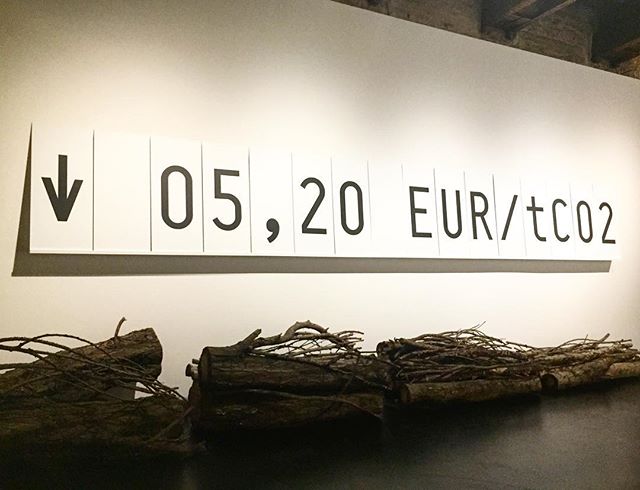 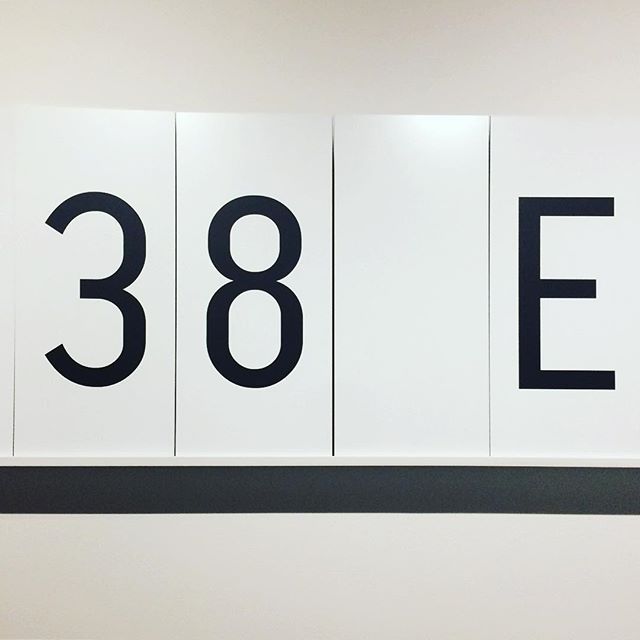 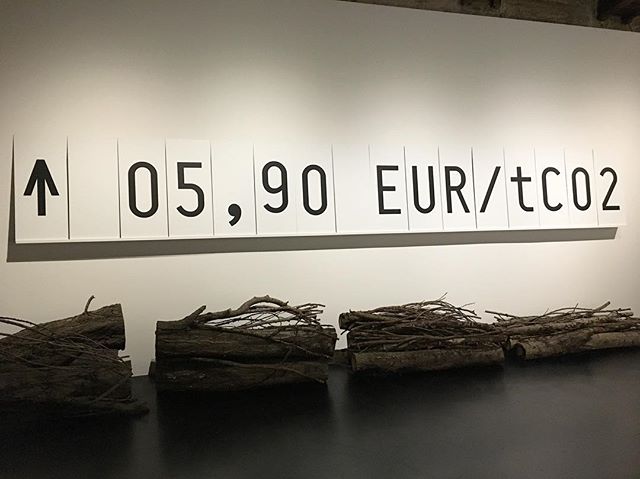 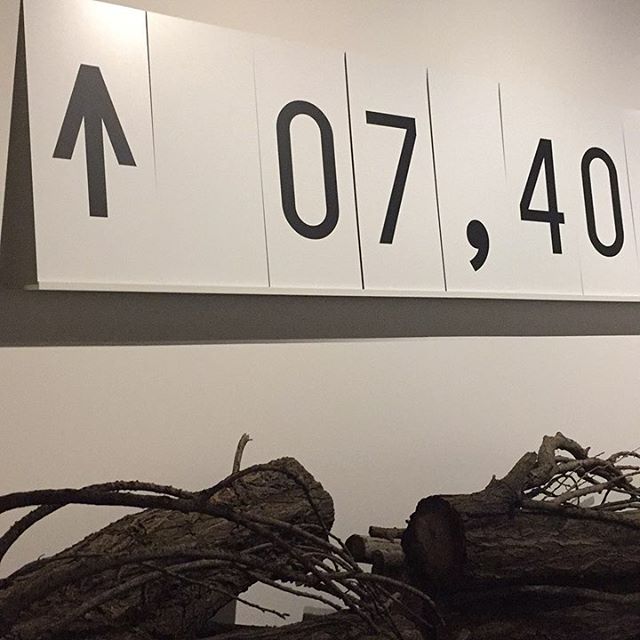 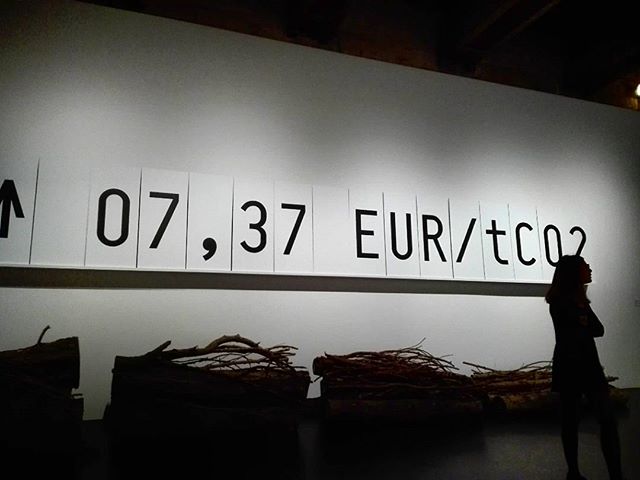 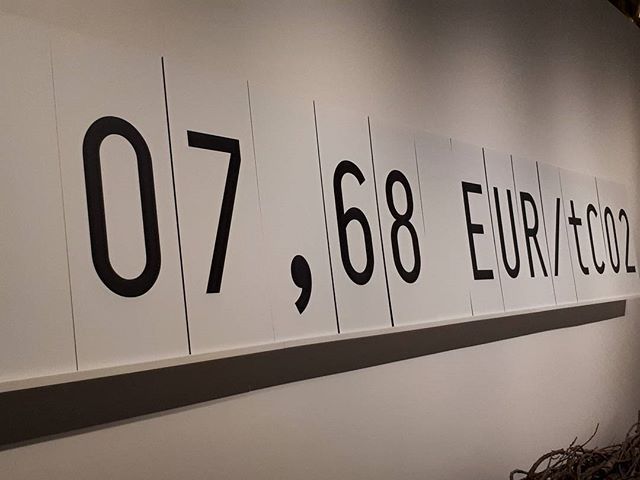 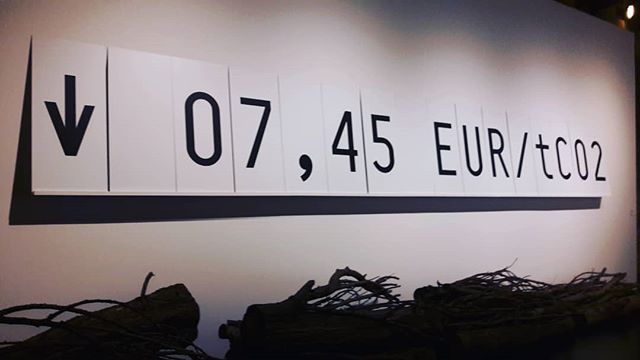 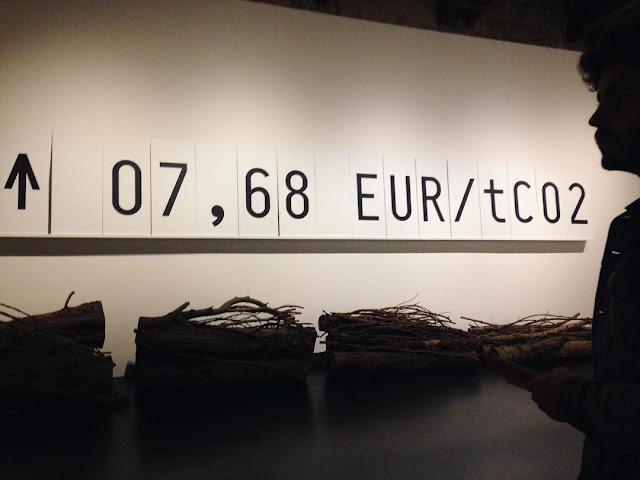 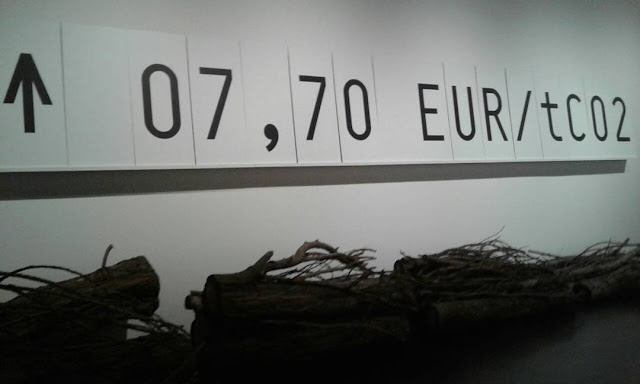 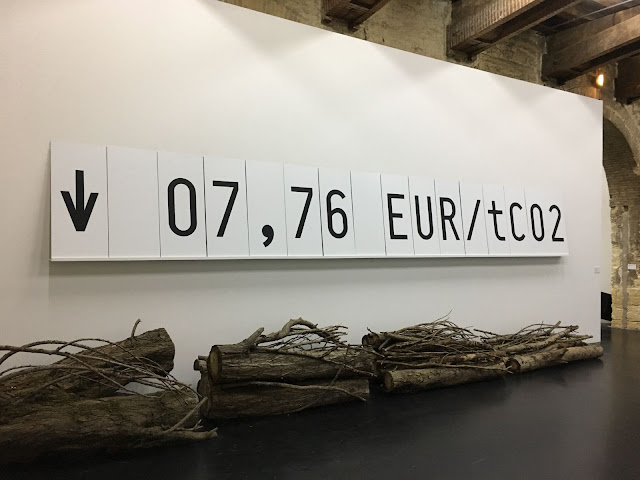 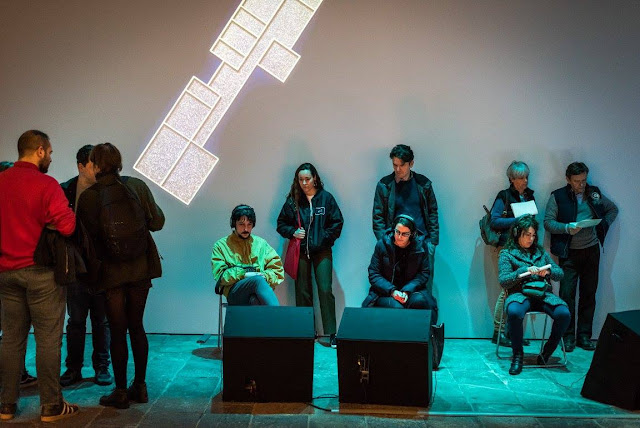 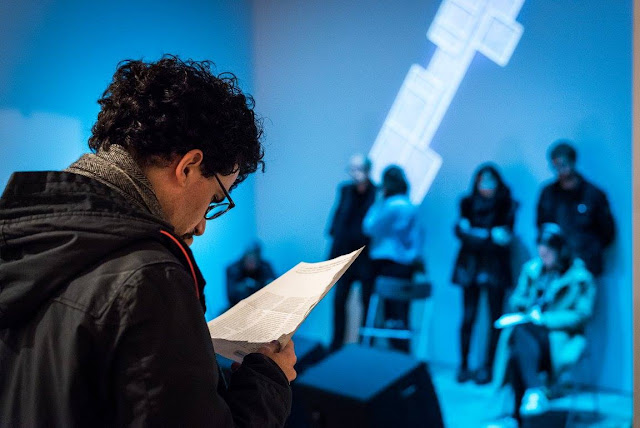 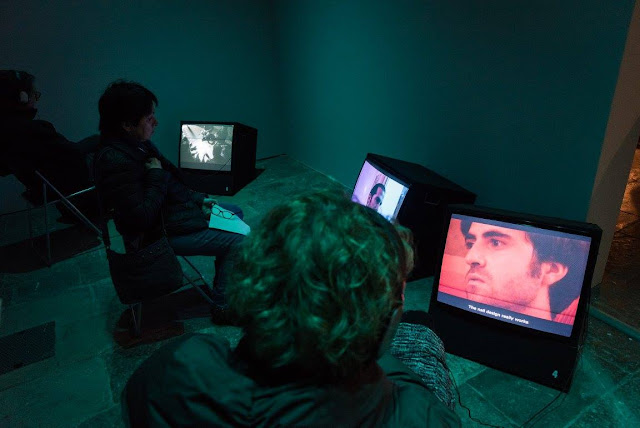 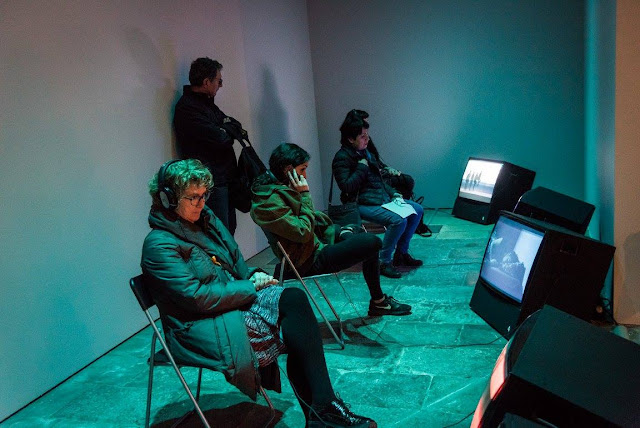