Thu, Feb 7 2013
As part of Moderation(s), the year-long collaboration in 2013 between Witte de With, Rotterdam, and Spring Workshop, Hong Kong, curators-in-residence Latitudes have invited artist Samson Young to develop a day-long tour of Hong Kong retelling the city and artistic concerns through personal itineraries and waypoints.

"Incidents of Travel: Hong Kong"
by Samson Young
7 February 2013
I am very envious of artists who are able to describe their practices in a manner that is concise, succinct, and consistent. To tell one’s life story is also to confess. I purge my catalogue of works and rebuild my identity (as told by images, sounds, and self-descriptions) every couple of years. Moderation(s)asks that I create a tour that “articulates the city and (my) artistic practice through routes and waypoints.” Are routes and waypoints more authentic than a studio visit? Are the vernacular, the eccentric and the marginal more “real,” in the same way that punk is real and techno apparently isn’t? The pressure to define the unique and the authentic is perhaps growing more urgent with globalization, but behind each assiduous defence of the authentic lies what Regina Bendix calls “unarticulated anxiety of losing the subject” (Bendix 1997).

During this tour, I eavesdrop on my own works in the presence of six others. We take an early morning sound-walk around the Kwun Tong industrial district, visit a site near the City Hall in Central where the now-demolished Queen's Pier was once located, and trespass the frontier closed area near the Hong Kong-China border. In between locations, we listen to recordings of music and/or read texts that have informed my work one way or another. 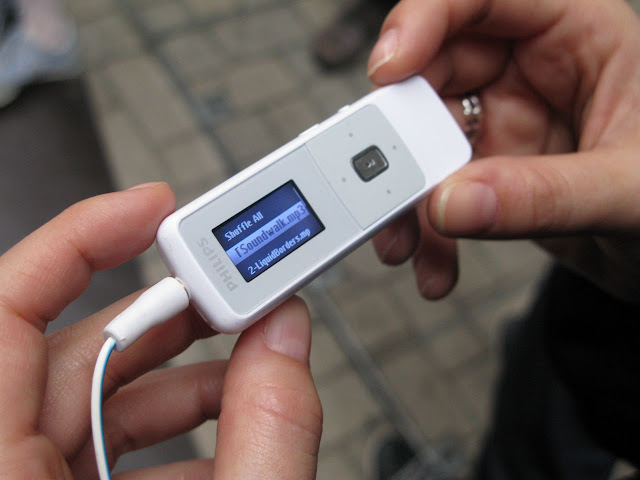 We begin the tour at 75 Hung To Road. I will conduct again a sound walk that I created back in 2009. Participants of the sound-walk follow me on a route through the Kwun Tong industrial district. To create this work I walked the same route a number of times at different dates and times, generating one full recording in each walkthrough. I then edited these recordings into a single soundtrack, to which the participants listen during the sound-walk. During the sound-walk, I follow my own footstep by listening to the sound marks in the soundtrack, to ensure that I am in sync with my recorded presence. 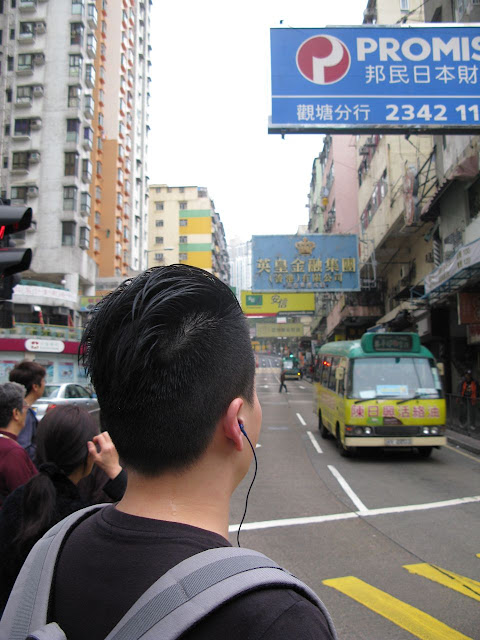 Samson Young leads us while listening to the 44 min. soundtrack "Kwun Tong Soundwalk" on mp3 players. 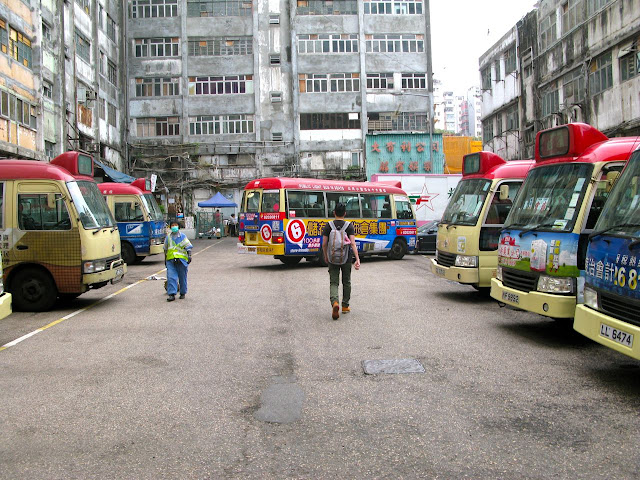 Young takes us through the bus station. 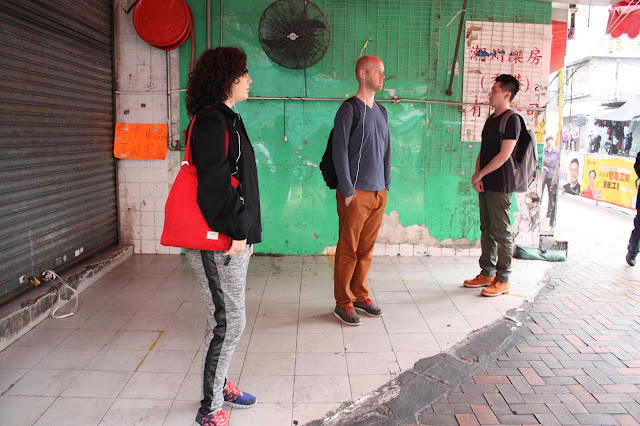 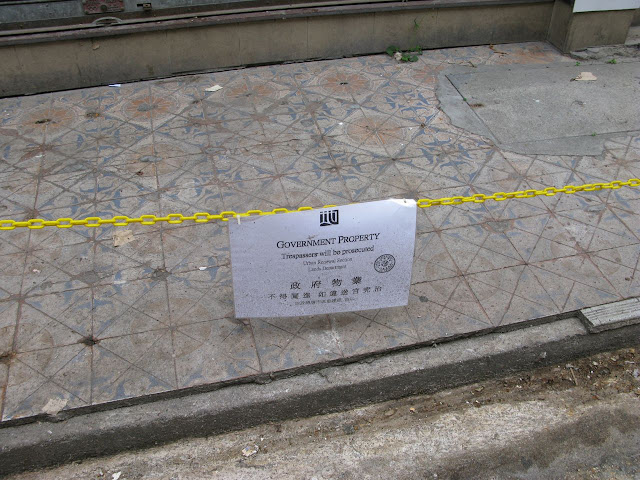 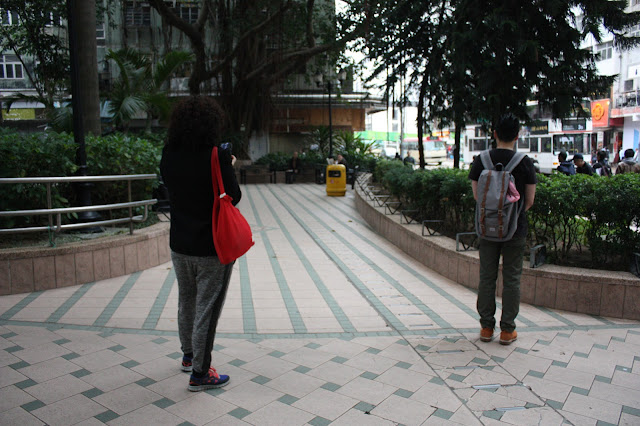 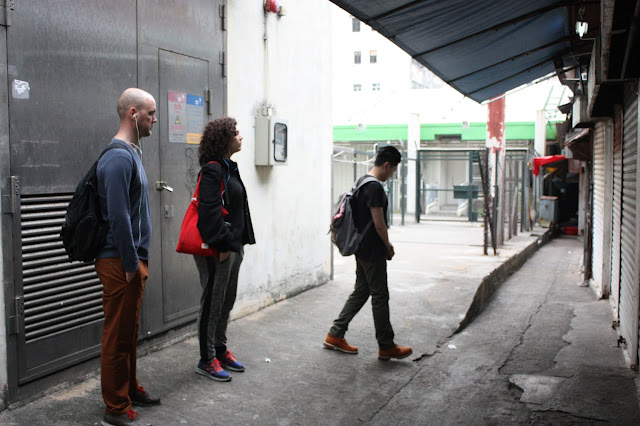 Tsim Bei Tsui, Frontier Closed Area
I was born in Hong Kong but mostly educated in Australia. I’ve always felt that children of Mainland Chinese parents had an easier time answering the question, “Where are you from?” They simply say, “I’m Chinese.” I always feel more natural saying I’m from Hong Kong, rather than plainly stating that I’m Chinese. Or, if I say I’m Chinese, I feel the need to add the footnote that I was born in Hong Kong. I am frankly confused by all of this. For the longest time, I avoided identity politics in my work, but the national education saga in 2012 prompted me to revisit this issue.

Hong Kong and Mainland China are physically separated by the ShenzhenRiver and a great wall of wired fencing, and south to the border are restricted zones known as the Frontier Closed Area. Entry into the Frontier Closed Area without an official permit is strictly forbidden. In October 2005, the then chief executive Donald Tsang announced a proposal to drastically reduce the Frontier Closed Area. In February 2012, 740 hectares of land were initially opened up for public access. The proposal will be implemented in phases, and other areas will soon follow suit. Since July 2012, I had been systemically collecting the sound of places and/or objects that separate the two regions. I recorded the vibration of the wired fencing with contact microphones and the water sounds of the Shenzhen River with hydrophones. I rearranged these recordings into sound compositions. I then re-transcribed these sound collages into graphical notations. 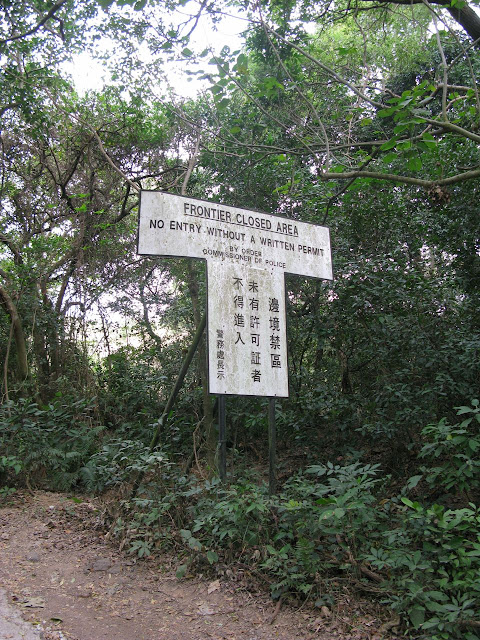 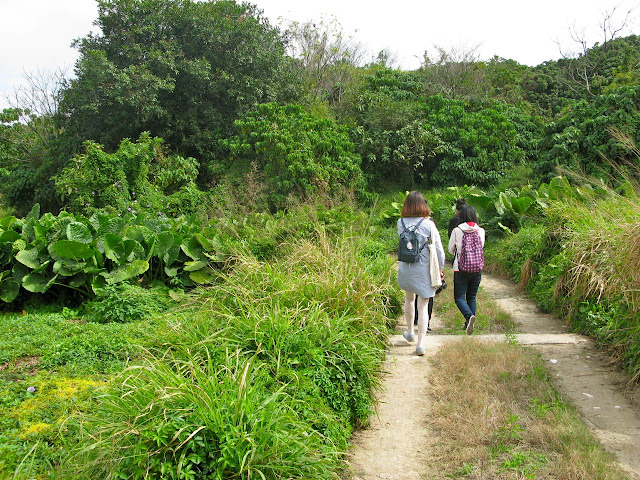 Walking through the fields that border China. 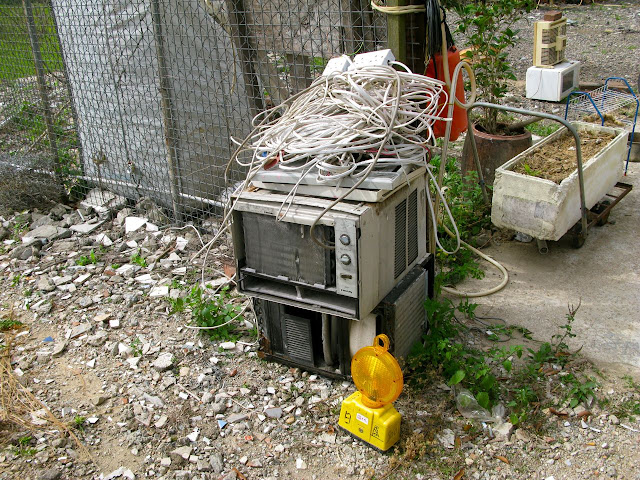 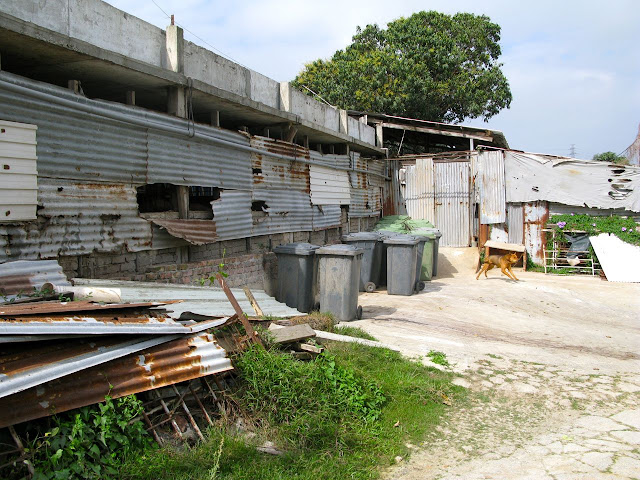 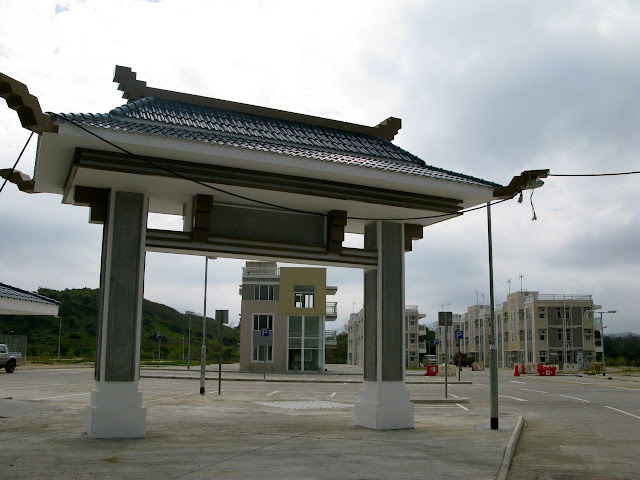 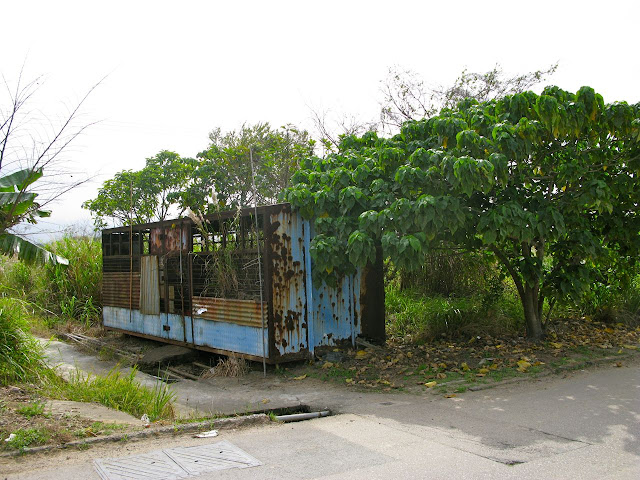 Self-build constructions/storage along the way. 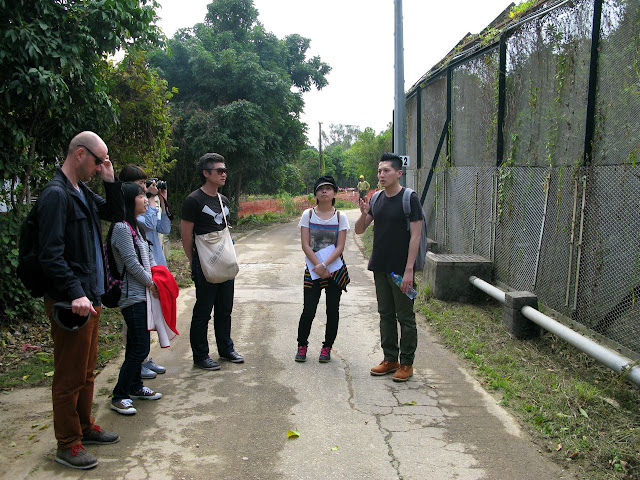 Young introducing the making of the soundtrack "Liquid Borders" we are about to listen to. 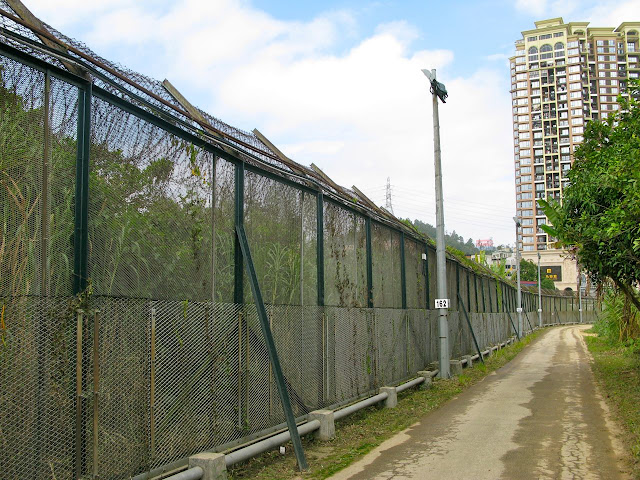 Since early 2012, 740 hectares of land have been opened up for public access, and buildings have been constructed nearer the fence which runs along the Shenzhen River. 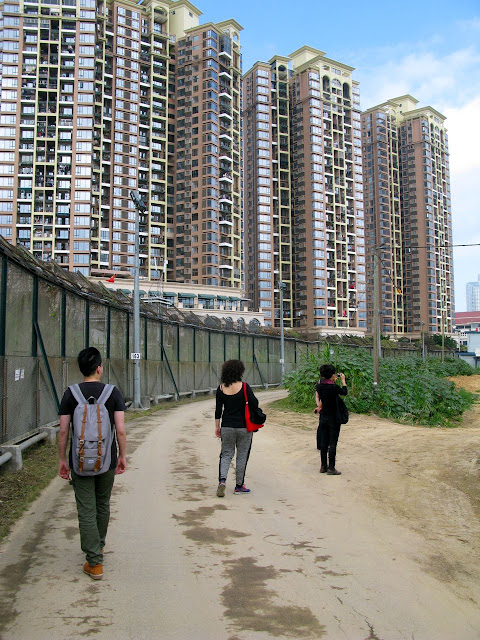 Bordering the fence while listening to the "Liquid Border" soundtrack. 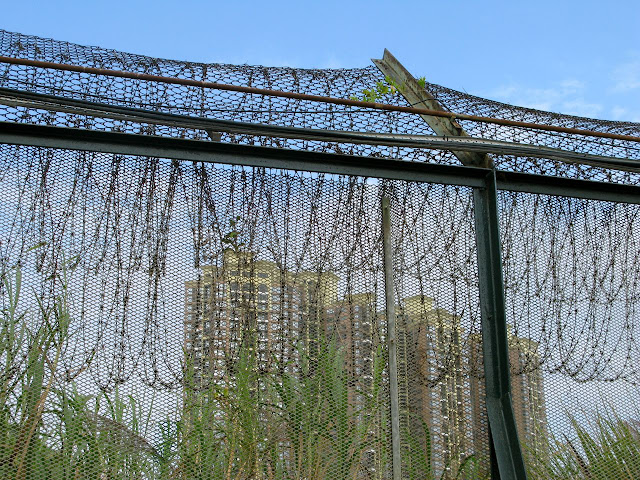 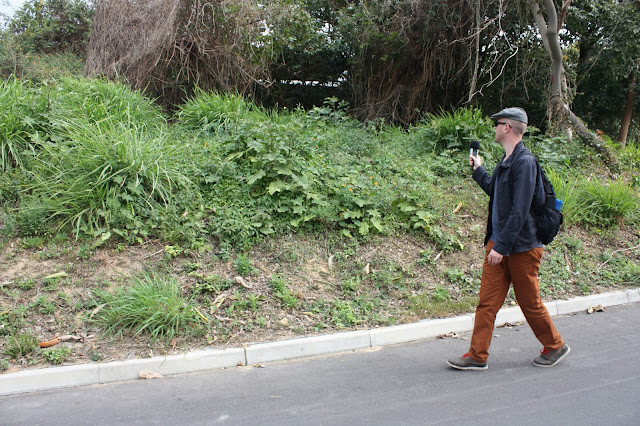 Queen’s Pier in Edinburgh Place.
Queen's Pier was a public pier in central in front of the City Hall. For decades it served not only as a public pier but also as a major ceremonial arrival and departure point. The pier witnessed the official arrival in Hong Kong of all of Hong Kong's governors since 1925; Elizabeth II landed there in 1975, as did the Prince and Princess of Wales in 1989. On 26 April 2007, the pier officially ceased operation. The government’s plan to demolish the pier to make way for a new highway was met with fierce opposition by conservationists. Despite the public outcry, Queen's Pier was demolished in the February of 2008.

I was living in New York when all of this happened. In 2009 I composed and directed a music theatre work entitled “God Save the Queen.” The work started out as a requiem for the Queen’s Pier. It evolved into a hymn to the structures, both physical and symbolic, of my teenage days – which were also the last of the colony’s. The performance was accompanied by a mixture of live footage from five theatre-based CCTV cameras, and pre-recorded clips of screen icon Helena Law Lan (who often played royalty for TV), dressed as the Queen. 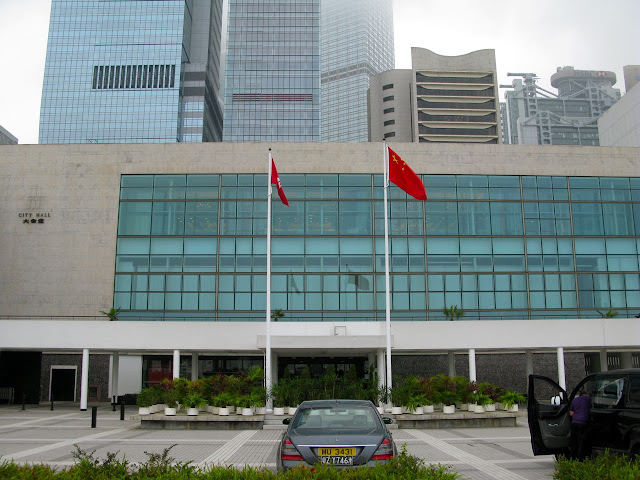 1956 City Hall building that connected with the now-demolished Queen's Pier in Edinburgh Place.
The lotus pond, University of Hong Kong

I was what you might call a “straight-down-the-center” composer to begin with. For over a decade I operated only in the concert in the capacity of a composer of the Western classical tradition. Now I do all kinds of weird things in all sorts of weird places. Chan Hing-yan, my mentor during my years at HKU, had a looming influence on me. I think a lot of what I do today is a reaction against what (I imagine that) I’d learnt during those formative years – a sort of a “creative misreading” as Harold Bloom would put it. 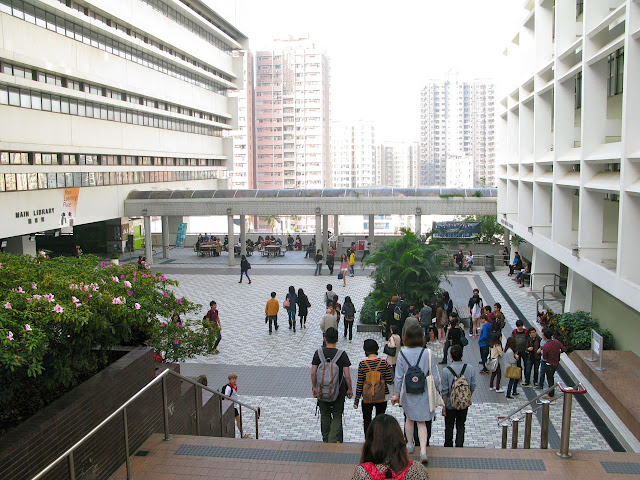 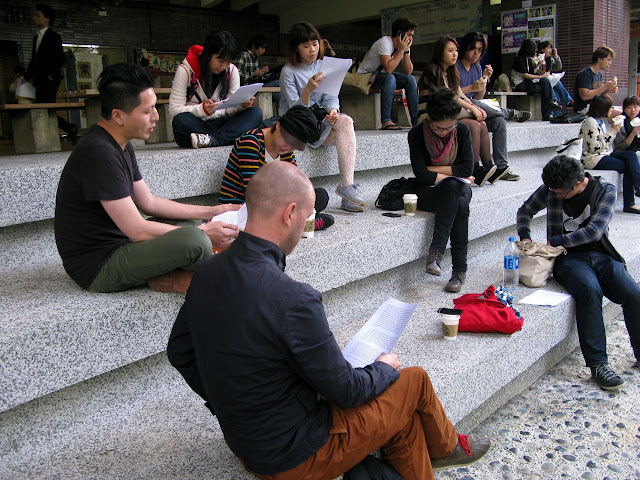 To end the tour Samson reads a passage of his dissertation about his approach to music composition and cultural politics. 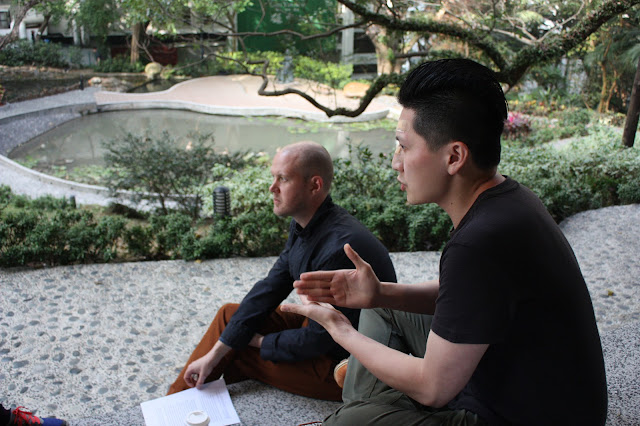 Talking nearby the lotus pond at "Hong Kong U". Photo: Spring Workshop

Samson Young (1979) is a composer, sound artist and media artist. Young received training in computer music and composition at Princeton University under the supervision of computer music pioneer Paul Lansky. He is currently an assistant professor in sonic art and physical computing at the School of Creative Media, City University of Hong Kong. Young is also the principle investigator at the Laboratory for Ubiquitous Musical Expression (L.U.M.E), and artistic director of the experimental sound advocacy organization Contemporary Musiking.  In 2007, he became the first from Hong Kong to receive the Bloomberg Emerging Artist Award for his audio-visual project “The Happiest Hour”. His brainwave non-performance “I am thinking in a room, different from the one you are hearing in now” received a Jury Selection award at the Japan Media Art Festival, and an honorary mention at the digital music and sound art category of Prix Ars Electronica.


All photos: Latitudes | www.lttds.org (except when noted otherwise in the photo caption)