Fucking Good Art 'base camp' in Maasvlakte, Rotterdam, until 21 September 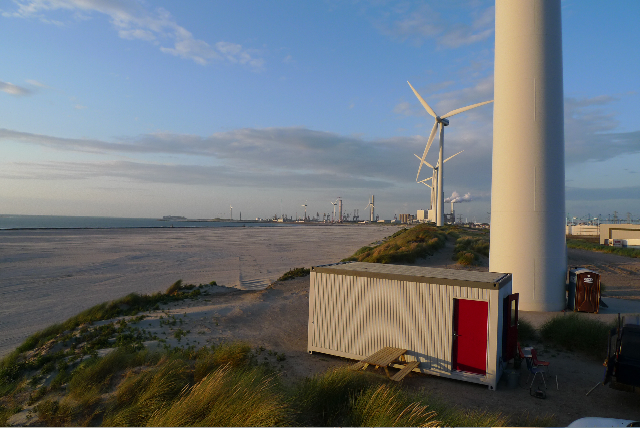 Images of the 'base camp' and surroundings where the editors of Rotterdam-based printed and online art magazine Fucking Good Art will be until 21 September. All images courtesy FGA.
Initiated and edited by artists Rob Hamelijnck and Nienke Terpsma in 2003, Fucking Good Art is a Rotterdam-based printed and online art magazine which publishes reports, interviews, critical writing and observations with a non-academic, freestyle and do-it-yourself attitude. The editors of FGA explores creative communities by residing in particular local contexts for extended periods, and specific magazine issues have grown out of residencies in cities including Munich, Berlin, Copenhagen, Riga, Zurich and São Paulo.

Adapting their embedded approach for Portscapes, the editors of FGA are living and working in a ‘base camp’ on the Maasvlakte for 5 weeks, starting 20 August while producing Portscapes_ON AIR. Comprising a series of audio walks, field recordings and conversations with guests from different disciplines Portscapes_ON AIR will be broadcast on the internet (www.portscapes.nl).

Inspired by their camp’s proximity to the pipeline which carries sand from the Yangtzehaven to the future Maasvlakte 2, the editors of FGA approach their endeavour both as inhabitants of an industrial and man-made territory and in relation to the redistribution and displacement of knowledge. Alongside other grand movements of transportation and trade taking place in the port, FGA’s broadcasts take shape through encounters with others and consider the role that art and artists have in other registers of exchange. Starting from the principal that in order to really understand a place one needs to really inhabit it, and the question of how to represent a place like as Maasvlakte 2 which does not yet fully exist, the editors of FGA also aim to stimulate discussion about the representation of Dutch landscape. They hope that their project could be pilot for a further research residencies.

Frank Bruggeman: Designer, artist and one of the editors of 'Club Donny', a strictly unedited journal on the personal experience of nature in the urban enviroment.

Hans Aarsman: Former photo journalist, and currently columnist for the Dutch newspaper "De Volkskrant" and playwriter. In 1988 he travelled for one year in Holland in his camper van - a Citroën HY - to produced the book 'Hollandse Taferelen'. He has published several publications: the photo book 'Aarsmans Amsterdam' (1993), his first novel 'Twee hoofden, een kussen' (1995) and in 2003 the autobiographical book 'Vrrooom! Vrrooomm!'. Some of his photos are free for download at the Nederlands Fotomuseum.

Remko Andeweg: Botanical analyst, City biologist of Rotterdam and author of the book 'Vreemde Planten in Rotterdam' [Exotic plants in Rotterdam, 2002], about the migration of plants that are considered foreign and endanger domestic vegetation.

Lino Hellings: Errorist! Recently founded the press agency P.A.P.A, an international network of artists and correspondents that creates news by taking action. Co-author of the publication "An Architecture of Interaction", and one of the founders of Dogtroep (1975), a self-styled form of visual theatre.

Aurélie Barbier: A French urban planner specialised in emerging cities. Currently working for Urbaplan, an urban planning firm based in Switzerland. She has worked on various projects in Southern Europe and sub-Saharan African countries (Cameroon, Niger, Ghana). Over the past five years, she has focused on the definition of master plan, regulatory plan and slum upgrading projects through a comprehensive approach that includes both social and technical dimensions of urban development.

Martin Blum: Swiss artist and farmer. Works together with Haimo Ganz under the name GANZBLUM. In their art projects they focus on (life)cycles. Martin recently started public art projects on his farm "Frohe Aussicht" outside Zurich.

John Lonsdale: Architect. In the last years he has begun mapping the ‘Mudscapes of the Netherlands’ whereby he strives for the reconciliation of architecture with landscape.

Achilleka Komguem: Artist from Duala. Editor of journal 'Diartgonale' and worked on a radio show in Bessengue. He is in visiting Holland for 'Talking about!' a project by curators Zoë Gray and Lucia Babina that brings six artists and cultural producers from Cameroon to the Netherlands. FGA are hosting Achilleka during his visit.

CLUI: The Centre for Land Use Interpretation is a research organisation based in Culver City, Los Angeles, involved in exploring, examining, and understanding land and landscape issues. The Center employs a variety of methods to pursue its mission - engaging in research, classification, extrapolation, and exhibition. http://www.clui.org

Thank you to PUMA for providing the accommodation and Delta for the electricity.
Portscapes is commissioned by the Port of Rotterdam Authority with advice from SKOR (Foundation for Art and Public Space, Amterdam) and is curated by Latitudes. Read more on completed projects and projects in production.