Symposium participants: In the Shadow of the Hand, Sacha Kahir, Caleb Waldorf, Max Andrews of Latitudes, Angeliki Roussou, WHW (What, How and For Whom?).
9.30am | Arrival and coffee
10am - 10.15am | Introduction by CCA Curator Remco de Blaaij and Dr Deborah Jackson
10.15am - 11am | In the Shadow of the Hand
11am - 11.45am | Angelika Roussou
11.45am - 12.30pm | Caleb Waldorf
1pm - 2pm | Lunch (provided)
2pm - 2.45pm | Sacha Kahir
3pm - 3.45pm | Sabina Sabolovic, WHW
3.45pm - 4.15pm | Break
4.15pm - 5pm | Max Andrews, Latitudes
The Shock of Victory is a programme consisting of an exhibition, a symposium organised in partnership with the University of Edinburgh and digital publication. Taking place exactly one year after the Scottish Independence Referendum of 18 September 2014, the programme proposes artistic approaches, techniques, provocations and motivations in a post-referendum reality departing from Scotland, but certainly not constrained by it.
The programme takes its title from the pivotal essay ‘The Shock of Victory’ from 2007, by anarchist and scholar David Graeber, in which he argues that protesters often have difficulty in recognising their moments of success. Accompanying the exhibition the symposium allows for a timely re-consideration of the complexities of the relations between alternative and established (art) institutions that might have been sparked by political moments such as the Scottish Independence Referendum of 2014.

The underpinning emphasis is on the ‘organisational turn’, a shift from hierarchical to self-organised models of organisation. In particular the focus is on the potency of radical (artistic) practices and ideas, which propose imaginative ways of organising – collectivism, anarchism, activism, networks, and self-organising. Can we think of a new artistic landscape that might have been formed? How do we organise ourselves in such times? 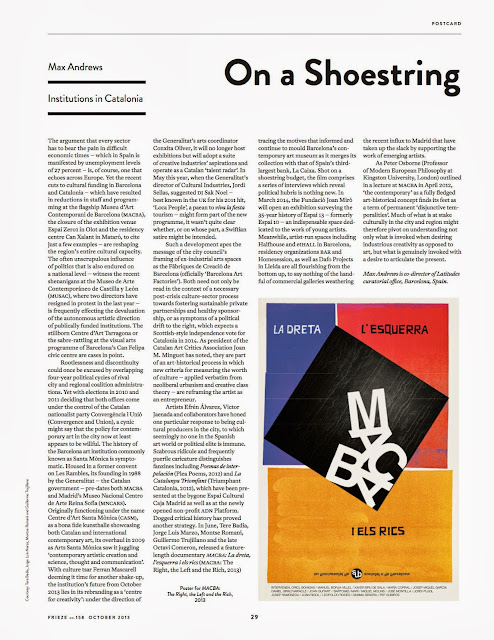 Article by Max Andrews published in Frieze, October 2013.
Max Andrews from Latitudes will offer a perspective on recent cultural politics in Barcelona. Looking in particular at visual art institutions, the 'open submission' format has become a pervasive tool. As an extraction of a democratic process, such an apparently accountable mechansim can nevertheless be complicit in a neo-liberal agenda, undermining institutional robustness and advocating continual 'present-ness'.

Other independent and self-organised realities do of course exist, and following recent municipal elections the political tide offers the promise of change. With reference to art practices that have connected with specific moments of Catalan social history, some contemporary case studies show a thinking around site, scale, longevity and depth – and perhaps reveal a connection with Scotland.

This is the blog of the independent curatorial office Latitudes. Follow us on Facebook and Twitter.
All photos: Latitudes | www.lttds.org (except when noted otherwise in the photo caption)
Work is licensed under a Creative Commons Attribution-NonCommercial-NoDerivs 3.0 Unported License.
2015, Barcelona, Glasgow, Max Andrews, Open Call, Spanish Art Scene, symposium