Wed, Dec 22 2010
Following is a selection of press reviews that has appeared in relation to 'The Last Newspaper' exhibition (New Museum, 6 October 2010–9 January 2011), in particular those who focused on Latitudes' edition of a weekly newspaper as catalogue-in-formation: 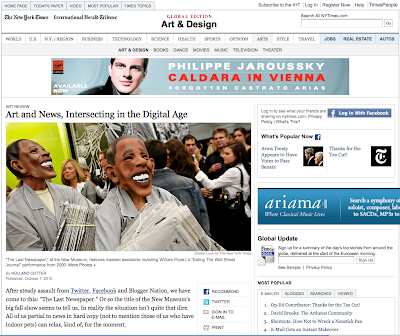 "And at the behest of the New Museum a print-savvy group called Latitudes from Barcelona is issuing another tabloid, this one weekly and edited from the third-floor gallery, that will double as an exhibition catalog. That publication would, of course, be the ideal place for the curators and participating artists to go on the record, at un-Twitterish length and polemical breadth, about the viability of analog journalism — and analog art — in the digital age. (...) Meanwhile the Latitudes news team — Max Andrews and Mariana Canepa Luna are the editors — has invited everybody and anybody, meaning you and me, to submit editorial suggestions and pitch stories, either in person or by e-mail ([email protected]). In the loosey-goosey spirit of the show, their paper will change names weekly, from the “The Last Post” to “The Last Gazette” to “The Last Register,” etc. But a genuinely “last newspaper” is still nowhere in sight. And you read that here." 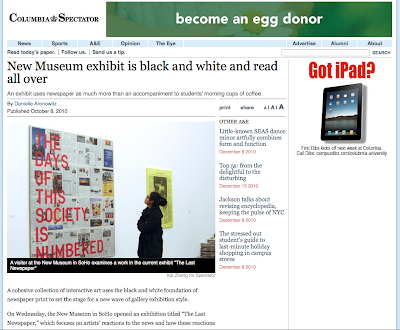 Danielle Aronowitz, 'New Museum exhibit is black and white and read all over', Columbia Spectator, 8 October 2010:
(...) "A second group, Latitudes—a curatorial organization based in Barcelona, Spain—will compile, edit, and publish a weekly newspaper that will catalogue information about the exhibit and the contributing artist groups over the next 10 weeks. To emphasize its importance, [exhibition curator Richard] Flood referred to this publication as “the journal of the exhibition.” 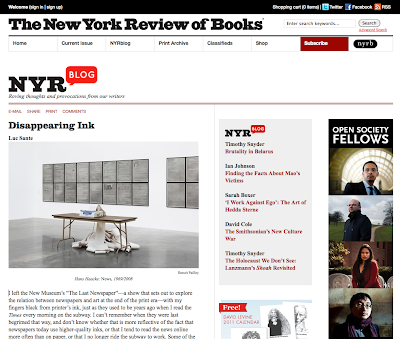 (...) and a tabloid, edited by the Barcelona-based curatorial office Latitudes, that has been variously called The Last Post, The Last Gazette, and The Last Register. (...) The tabloid, which focuses on newspapers, as well as on the show itself, is rather puckish. The Last Gazette includes, for example, a record of a quixotic attempt by Ines Schaber to approach the underground facility in western Pennsylvania where the photo agency Corbis keeps its archive of some 70 million pictures. The story evokes the cold-war espionage genre—an unremarkable setting masks a culture of such militant secrecy that the best the author could manage is a murkily distant photo of the facility’s parking lot. Its meandering text and bland snapshots, on the other hand, evoke the whimsical record-keeping of 1970s conceptual art, which is rather more in keeping with the spirit of the show. 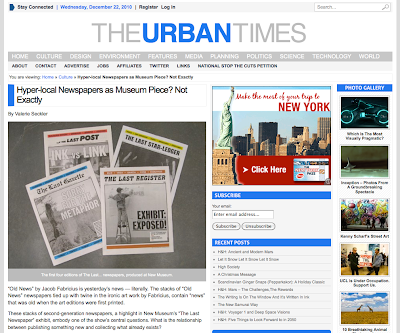 “How is a museum, such as New Museum, no longer (just) in the artwork display business?” asks an editorial in The Last Post. “Is it a producer, a publisher or a distributor? Should a museum or a newspaper be a community, a platform or a network, for example?” The newspapers themselves are hybrids: actual publications and art object. (...) “The Last…” newspaper series comprises “final” editions with names like “The Last Observer,” “The Last Monitor,” and (the first edition) “The Last Post.” They are dedicated to illuminating “The Last Newspaper” fine art on exhibit. Some of the reportage ranges beyond it. (...) “The Last Post” itself is an arch reference to the never-ending practice of posting 21st century news online. “The Last Post’s” Oct. 6th edition’s screaming front page headline makes the humorous proposition: “Ink vs Link.” Smaller decks stacked below it read: “Lippmann vs Dewey, Fact vs Interpretation, Editor vs Curator,” and conclude with the query: “How do you get your information?” 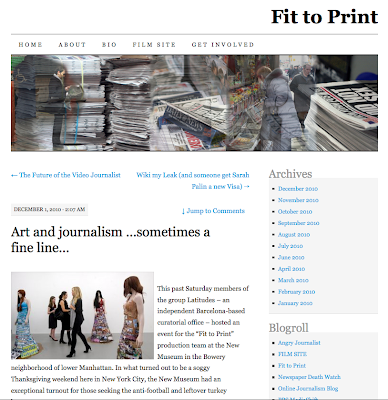 This past Saturday members of the group Latitudes – an independent Barcelona-based curatorial office – hosted an event for the “Fit to Print” production team at the New Museum in the Bowery neighborhood of lower Manhattan. (...) I was too intrigued by the wall-to-wall displays of vintage newspaper front pages in one of the rooms. It was hard not to examine the way in which newspapers implemented multiple sub-headlines back in the early part of the twentieth century. In a way, many start-up news websites are creating similar sub-heads to draw reader attention in the vast wild west of search engine optimization. This would be a topic our guest speaker, Jason Fry, would speak about during our panel discussion.

[Read an edited transcription of the event here.] 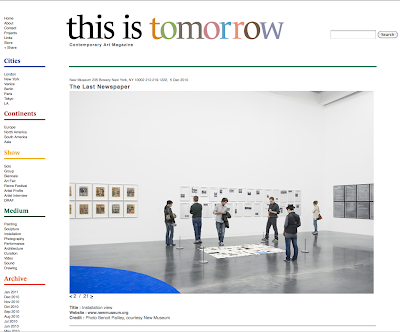 Latitudes, the Barcelona-based curatorial office, and a diverse team lead by Joseph Grima and Kazys Varnelis/Netlab, are on site producing weekly newspapers.

'THE LAST POST' / 'THE LAST GAZETTE' / 'THE LAST REGISTER'... is the evolving-titled 12-page free weekly newspaper and an incremental exhibition catalogue edited during a 10 week editorial residency by Latitudes. Produced from a micro-newsroom placed on the third floor of the museum the tabloids will be an archive in formation companioning The Last Newspaper’s exhibition, artworks and events, as well as being a platform for critical reflection on the wider agency of art and artists with respect to concerns about how information is produced, managed, recorded, re-ordered, and disseminated.

With kind permission from Latitudes we are reproducing two selected text from their catalogue/newspapers, written by The Last Newspaper London correspondent and 'this is tomorrow' features editor Lorena Muñoz-Alonso (continue reading...) 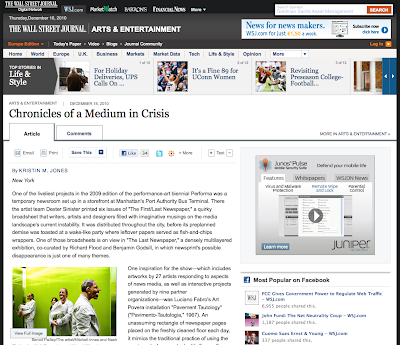 (...) Via a micronewsroom, Latitudes, a Barcelona-based curatorial team, produced a tabloid whose name changed each week. The spirited articles include stories on artists, filmmakers and topics ranging from ProPublica to the history of cast-iron newsstand paperweights; its issues will be bound together after the show ends in lieu of a catalog. The editors commissioned profiles and interviews related to the show but also solicited story ideas, headlines inspired by personal events and other information from the public.