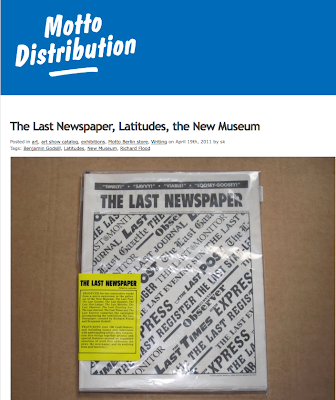 'The Last Newspaper' was a hybrid exhibition inspired by the ways artists approach the news and respond to the stories and images that command the headlines. Co-curated by Richard Flood and Benjamin Godsill, the exhibition was held at the New Museum, New York, from 6 October 2010 to 9 January 2011.

Alongside the exhibition, a number of partner organisations, including Latitudes, used on-site offices to present their research and stage public dialogues. ‘THE LAST POST’ / ‘THE LAST GAZETTE’ / ‘THE LAST REGISTER’… was an 12-page free weekly newspaper and an incremental exhibition catalogue edited during a 10 week editorial residency byLatitudes .

This published record, designed by Chad Kloepfer and Joel Stillman, is the surrogate catalogue of The Last Newspaper. Featuring over 100 contributors, including essays and interviews with participating artists, the compilation also brings together articles and special features around an expanded selection of work that addresses the news, the newspaper, and its evolving form and function. 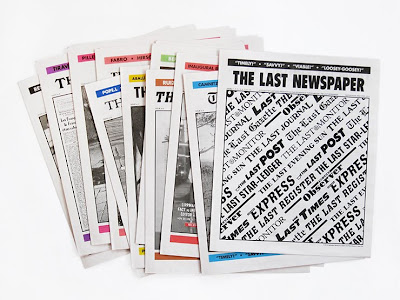 Produced for ten consecutive weeks from a micro-newsroom in the galleries of the New Museum, #1 The Last Post; #2 The Last Gazette; #3 The Last Register; #4 The Last Star-Ledger; #5 The Last Monitor; #6 The Last Observer; #7 The Last Evening Sun; #8 The Last Journal; #9 The Last Times; #10 The Last Express comprise the catalogue accompanying the exhibition "The Last Newspaper", curated by Richard Flood and Benjamin Godsill. Featuring over 100 contributors, and including essays and interviews with participating artists, this compilation also brings together articles and special features around an expanded selection of work that addresses the news, the newspaper, and its evolving form and function. There are two versions of the catalogue: 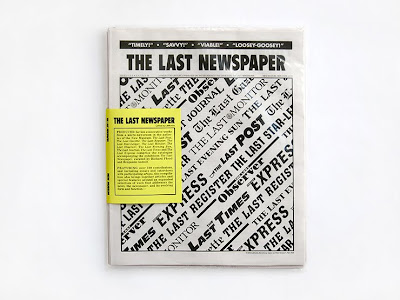 Regular edition of 'The Last Newspaper'. Photo: Joel Stillman
– A 'regular edition' in a poly bag with sticker containing the 10 newspapers + a 4 page black-and-white supplement with editorial, contents page and index ($15, $13.50 museum members). 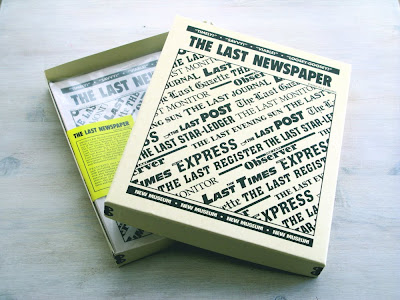 Both can be purchased from the New Museum Store.