Report: Liverpool Biennial 2018 "Beautiful world, where are you?" in photos 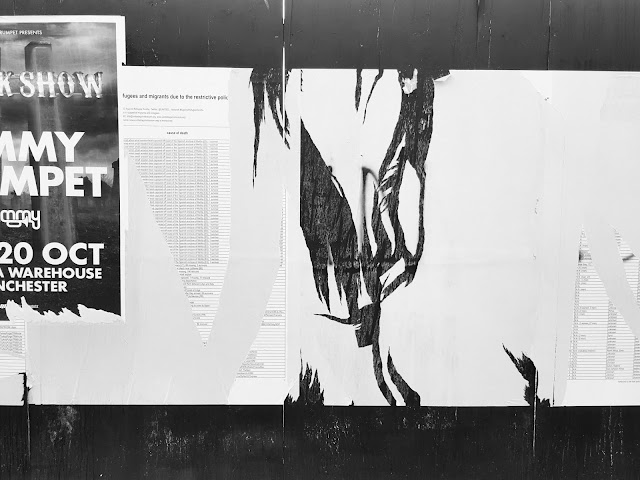 The 2018 edition was curated by Kitty Scott (Carol and Morton Rapp Curator, Modern and Contemporary Art at the Art Gallery of Ontario) and Sally Tallant (Director, Liverpool Biennial) with the Liverpool Biennial team.

The following texts are from the Liverpool Biennial website. All photos by Latitudes. 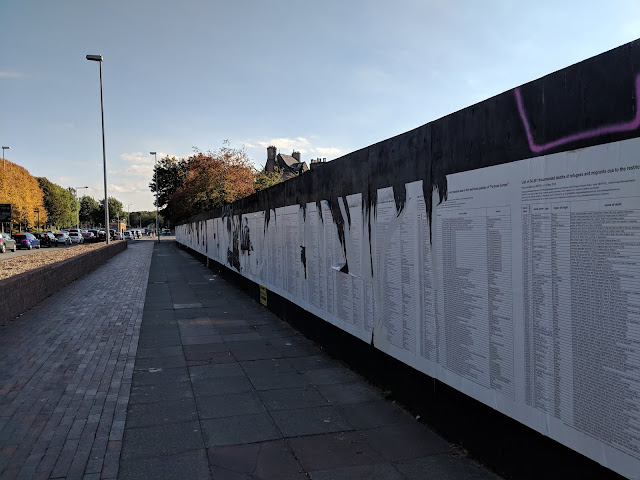 Above and below. Banu Cennetoğlu's "The List" on a 280-metre hoarding on Liverpool's Great George Street.
Compiled and updated each year by UNITED for Intercultural Action, an anti-discrimination network of 550 organisations in 48 countries, "The List" traces information relating to the deaths of more than 34,000 refugees and migrants who have lost their lives within, or on the borders of Europe since 1993. Since 2007, in collaboration with art workers and institutions, Banu Cennetoğlu has facilitated up-to-date and translated versions of "The List"  using public spaces such as billboards, transport networks, and newspapers. An updated edition of The List is presented on Great George Street in Liverpool and can be accessed online at guardian.co.uk. Copies of "The List", which were distributed by The Guardian newspaper on World Refugee Day on 20 June, are also available at exhibition venues.
Installed on a 280-metre hoarding on Liverpool's Great George Street, "The List" has been vandalised twice since the biennial opened in July. Cennetoğlu decided not to install it for a third time, leaving the ripped remains as a “reminder of the systematic violence exercised against people”. 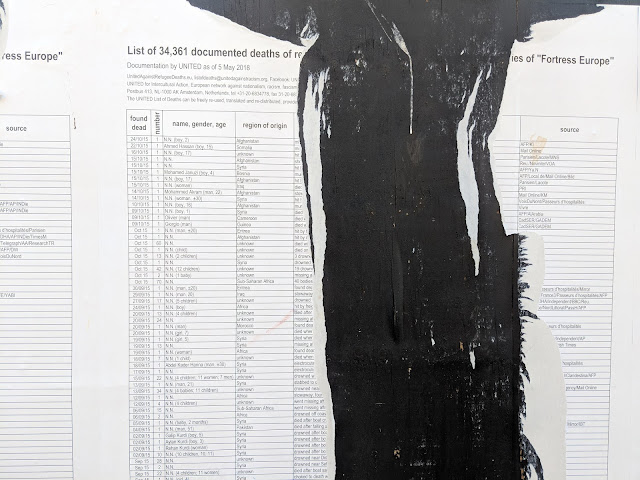 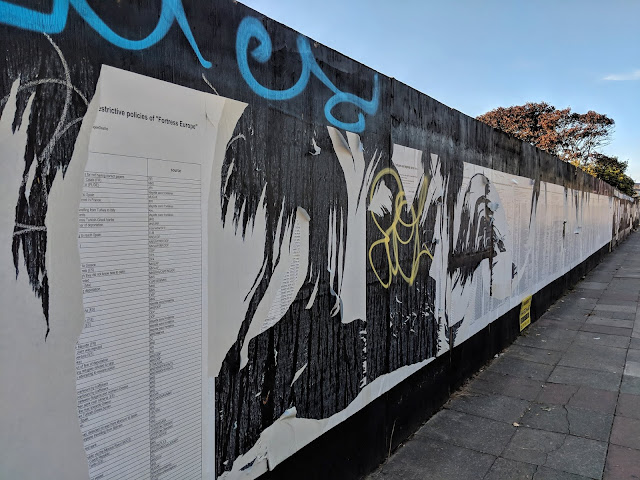 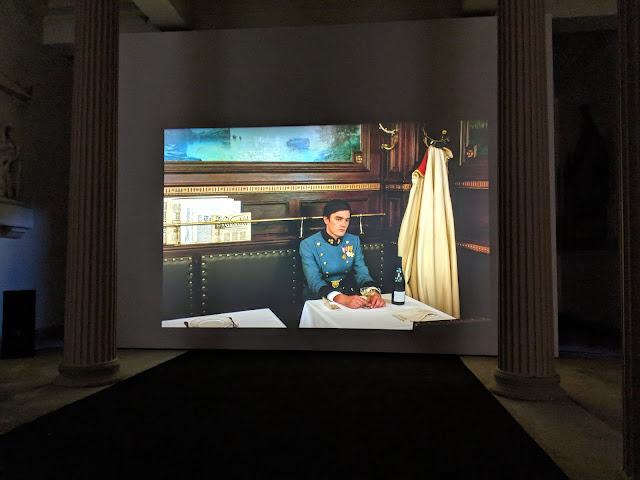 Mathias Poledna at The Oratory.
Screened within a specially designed structure, Mathias Poledna’s new film "Indifference" (2018) further advances his exploration of modernity’s visual imaginary. The work is set against the backdrop of early 20th-century European history, a period of traumatic modernisation and conflict. 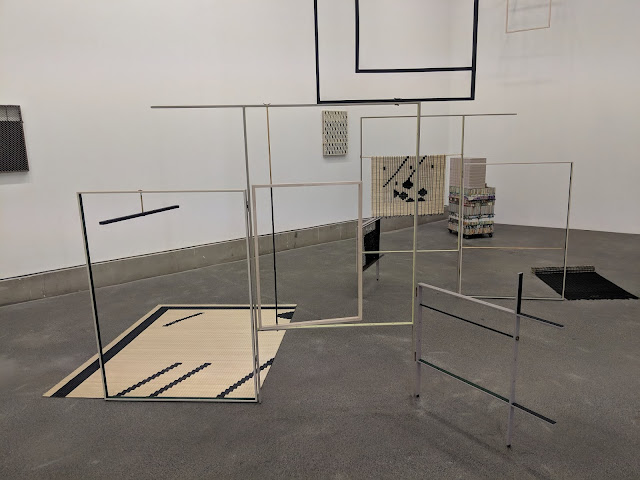 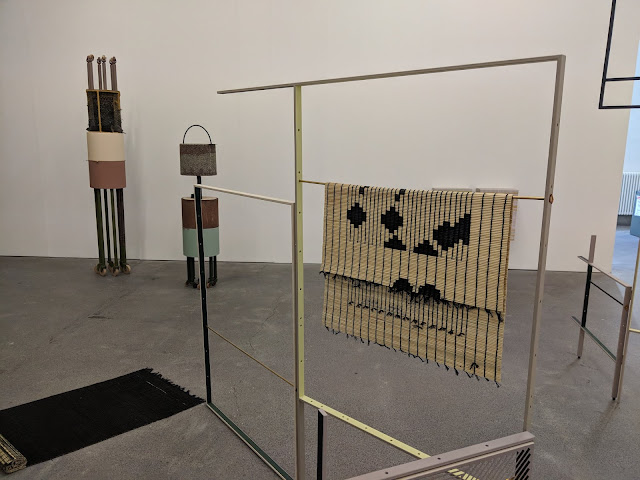 Suki Seokyeong Kang at Bluecoat.
Conceived as a visual translation of the Korean musical notation ‘Jeongganbo’, Land Sand Strand is a new multi-part installation by Suki Seokyeong Kang. The work transforms the exhibition space into a grid. Building on the concept of the hwamunseok – a traditional Korean woven mat, interpreted as the minimum space provided for each individual in society – it is activated by performers and the audience. The choreography, inspired by the Spring Oriole Dance and traditionally performed on the hwamunseok, is shared with visitors. The movements on the mat serve as the blueprint for the wider installation consisting of painting, sculpture and video. 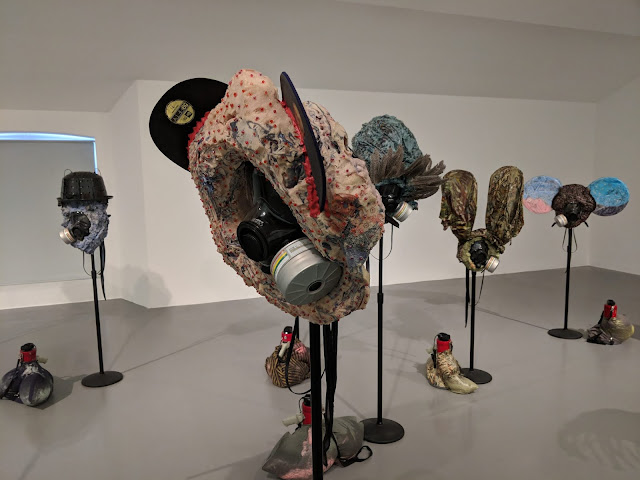 Brian Jungen at Tate Liverpool.
Brian Jungen carves ‘feathers’ from the soles of Nike trainers to create a series of sculptures that resemble Cheyenne-style war bonnets. These headdresses, familiar from countless Westerns, address a long history of conflict and the lingering effects of colonisation. They signify the strength and pride of indigenous people today. 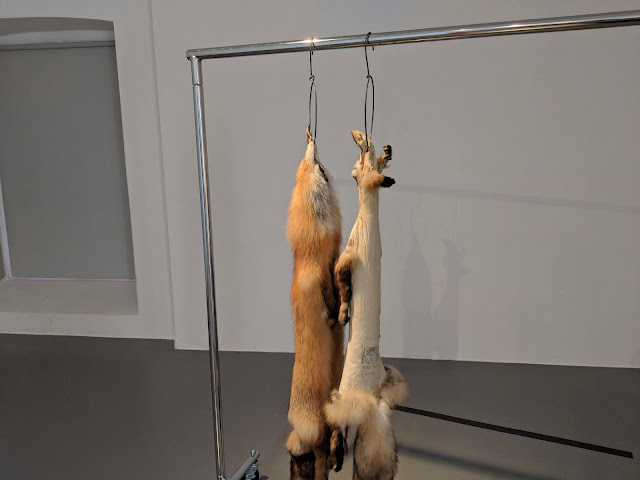 Duane Linklater at Tate Liverpool.
The sculptural works of Duane Linklater consider the notions of cultural loss, social amnesia and identity from the perspective of the indigenous peoples in Canada. Commenting on the economy of the fur trade, they suggest that animals, even in death, might retain their spirits or selfhood beyond the value they possess as commodities. 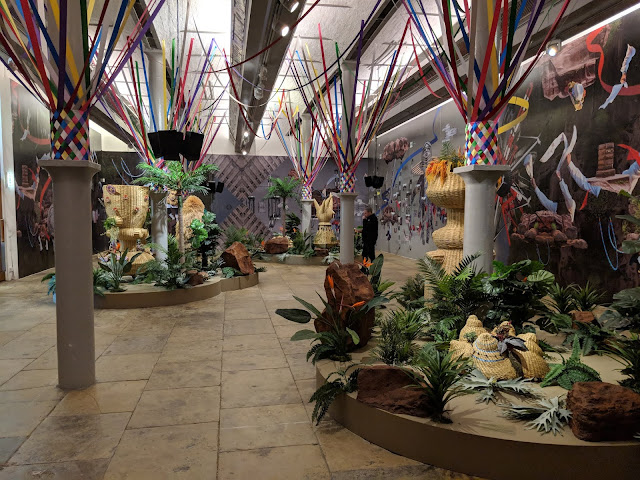 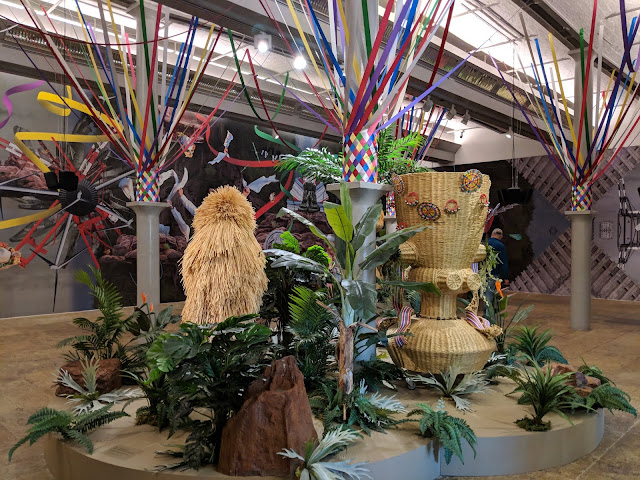 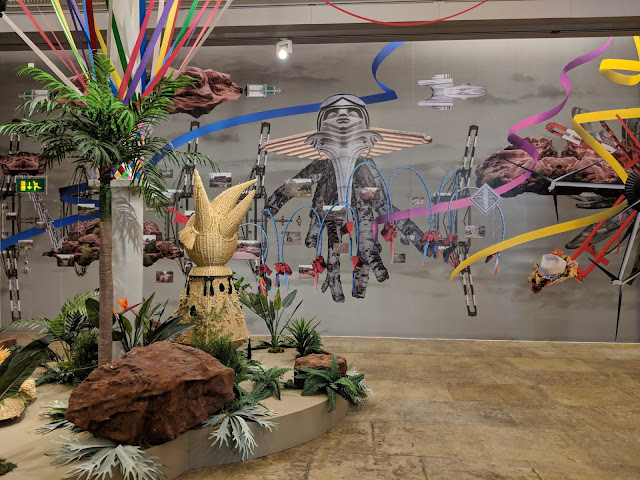 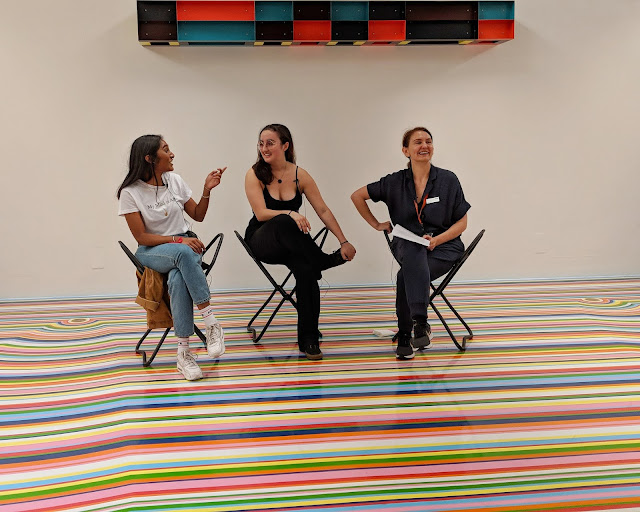 Not as part of the biennial programming, but this conversation coincided with our visit.
The White Pube's Zarina Muhammad and Gabrielle de la Puente were in conversation with Tate Liverpool's new director Helen Legg about their origins as "embodied art critics", their practice and the challenges art criticism presents today. 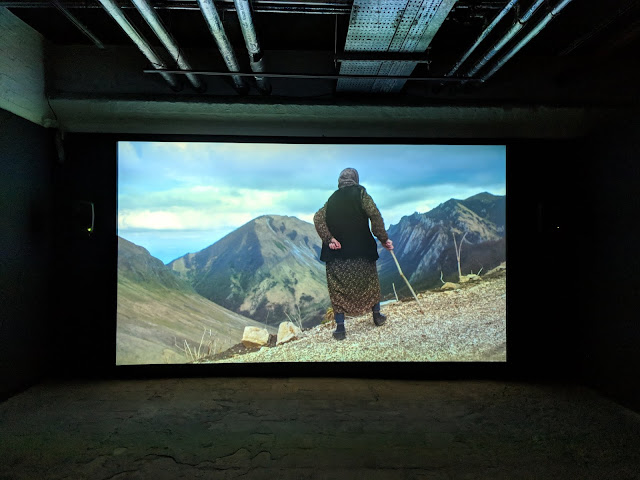 Aslan Gaisumov at St George’s Hall.
Tracing the struggles and turbulent histories of the Chechen people, Aslan Gaisumov’s most recent work Keicheyuhea (2017) follows the artist’s grandmother as she returns to her lost homeland in the mountainous scenery of the North Caucasus for the first time since the displacement of her family 73 years earlier. 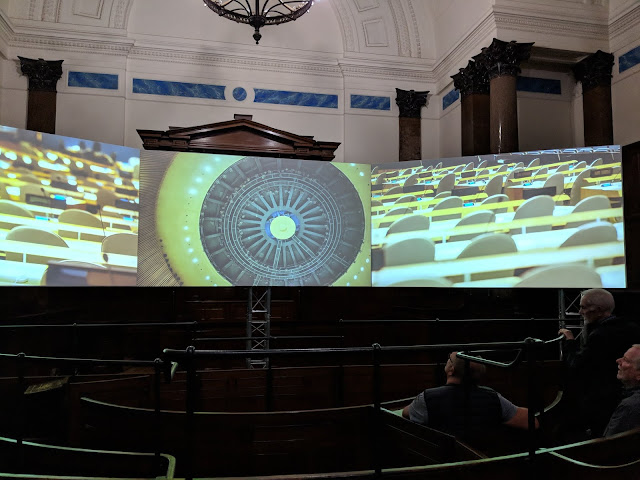 Naeem Mohaiemen at the St George’s Hall.
Screened in the courtroom at St George’s Hall is "Two Meetings and a Funeral" (2017), a three-channel film by Naeem Mohaiemen – currently nominated for the Turner Prize 2018. The work revisits the Cold War-era power struggles between the political coalitions of the Non-Aligned Movement (NAM) and the Organization of Islamic Cooperation (OIC). The project navigates alliances of convenience made during Bangladesh’s fight for UN recognition, as well as parallel decolonisation struggles in Palestine-Israel, the Portuguese colonies and South Africa. 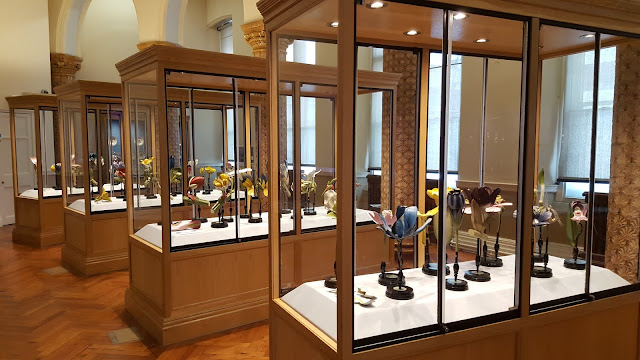 At the Victoria Gallery & Museum. Part of "Worlds within worlds" section.
Display of the Brendel Plant Models of World Museum anatomical models of plants, made for display and teaching purposes by the Berlin firm of R Brendel & Co in Germany around the turn of the 20th century. 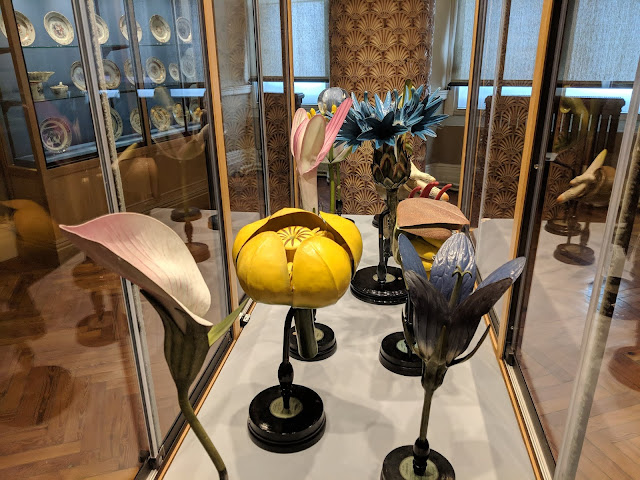 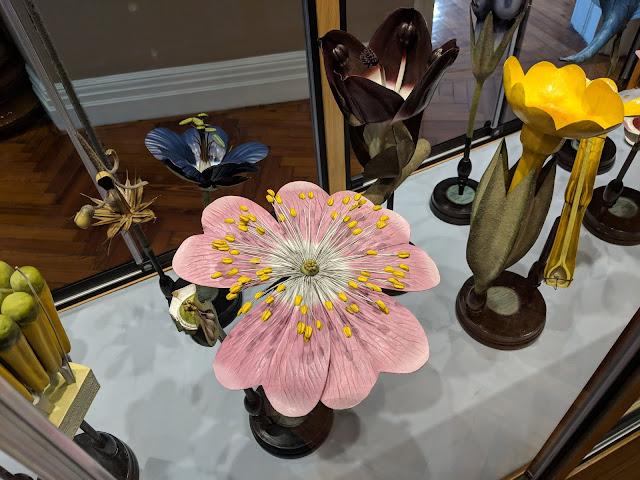 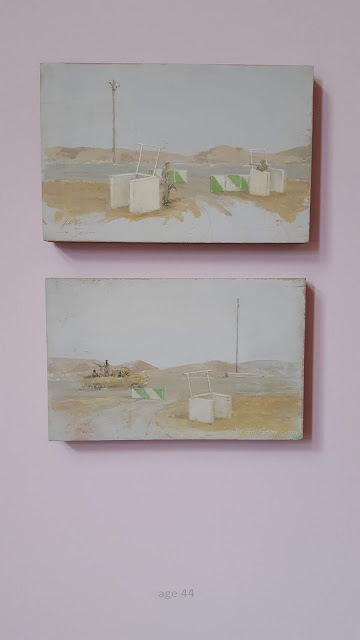 Francis Alÿs' paintings at the Victoria Gallery & Museum.
Francis Alÿs presents a selection of postcard-size paintings from the 1980s to today under the title Age Piece. Executed in the tradition of classic à plein air painting, these works allude to the condition of global tourism in the contemporary art scene. Many of the paintings were done while scouting new locations for future film projects, often in conflict zones such as Israel and Palestine, Afghanistan and Iraq. 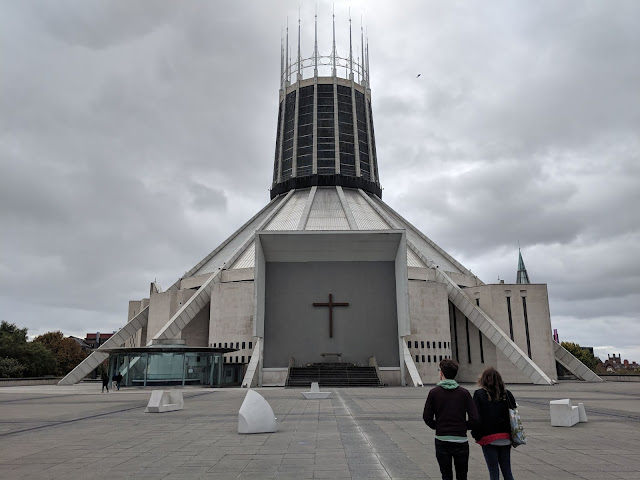 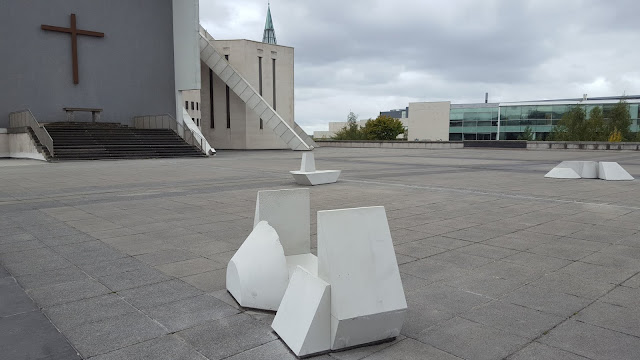 Liverpool Metropolitan Cathedral Plateau.
Five bench-like sculptures can be found on the plateau behind the Liverpool Metropolitan Cathedral. For this new commission, Ryan Gander dissected a model of architect Frederick Gibberd’s modernist cathedral into a series of simple ‘building blocks’. The blocks were then reassembled into different configurations by schoolchildren from Liverpool: Jamie Clark, Phoebe Edwards, Tianna Mehta, Maisie Williams and Joshua Yates. The maquettes that Gander and the children created have been reproduced on a larger scale to produce this new public seating arrangement within the cathedral grounds. This presentation is part of a larger project, Time Moves Quickly. 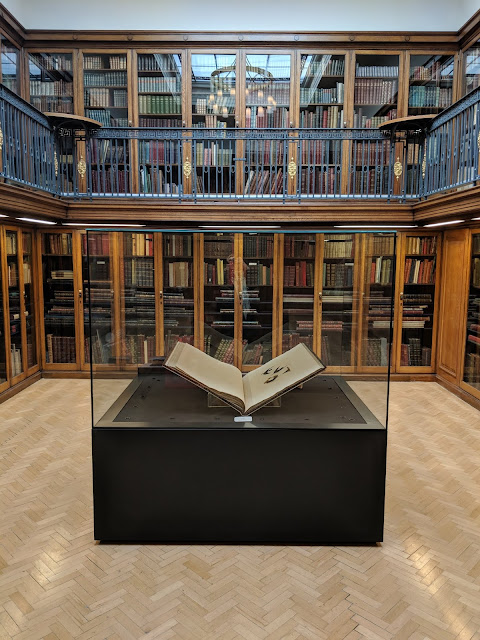 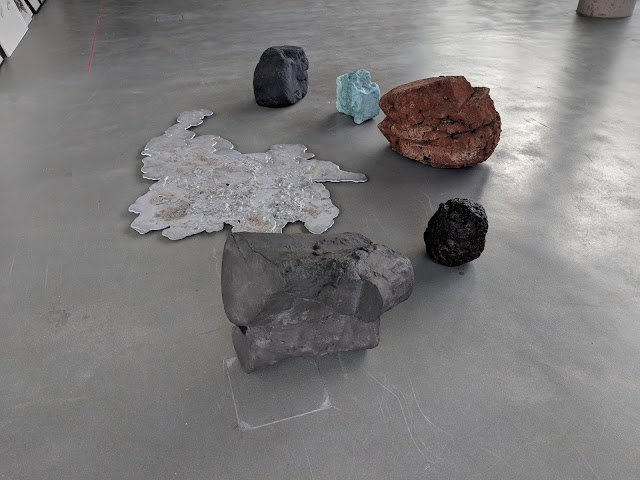 Paul Elliman's work at the Exhibition Research Lab.
Paul Elliman presents the "Vauxhall Astra 2020", the forthcoming and newest model of a car available since 1979 when General Motors launched the Vauxhall/Opel Astra, now the only car produced at Ellesmere Port. The Astra 2020 is offered as a constellation of raw materials, half-a-dozen boulders and rock-like lumps of the car’s constituent parts at original scale, made of steel (iron ore), glass, plastic, aluminium, rubber, and electrical components. 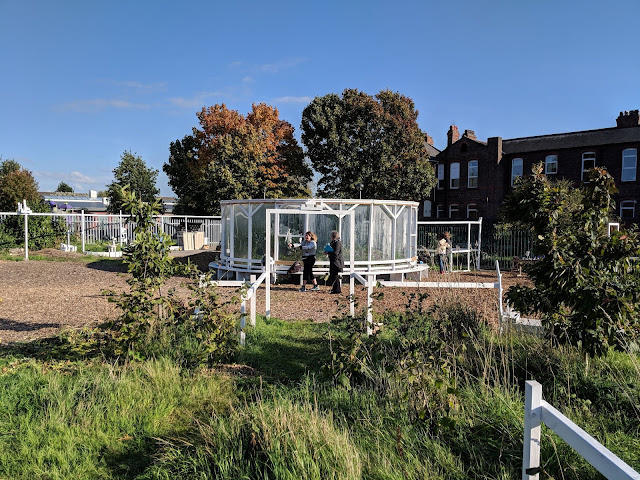 Above and below, Resilience Garden in Granby Street, Toxteth.
Mohamed Bourouissa has created a garden working with local people, gardeners, school pupils, teachers and artists. The artist was inspired by a garden made by a patient of the psychoanalyst and writer Frantz Fanon at the Blida-Joinville Psychiatric Hospital in Blida, Algeria. Fanon’s patient created the garden as occupational therapy, reflecting the organisation of his mental space through its structure. Bourouissa researched and learned the patient’s approach to botany, architecture, and therapy in order to create a similar garden in Liverpool. The garden has been conceived as a space of ‘resilience’. Some of the plants are native to Algeria and others have healing effects. A film documenting the garden and its evolution are presented at FACT. 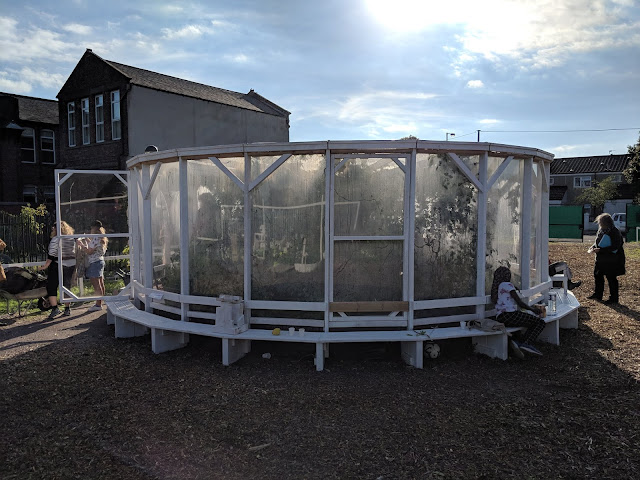 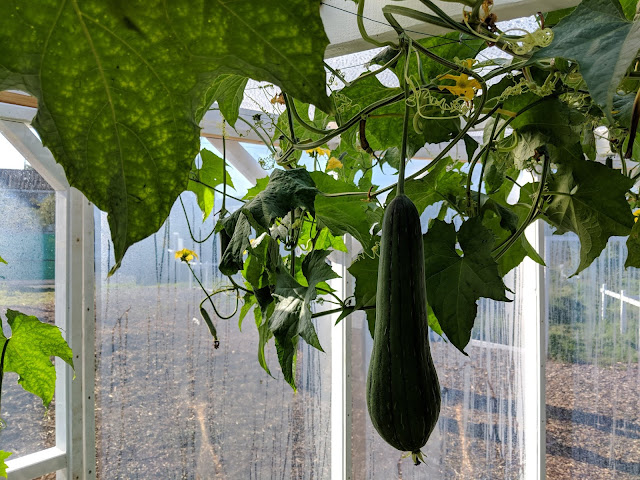 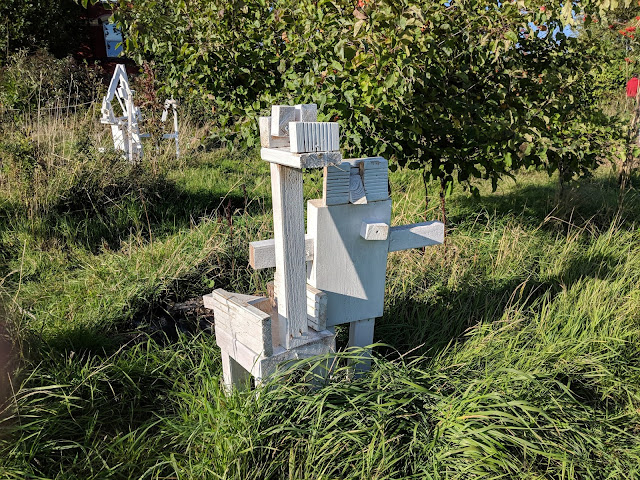 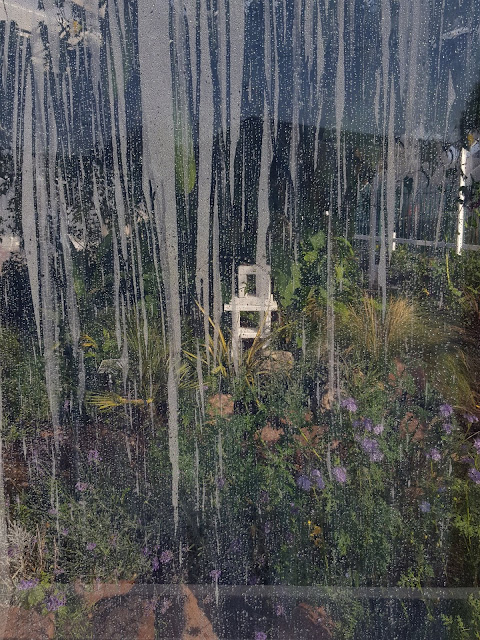 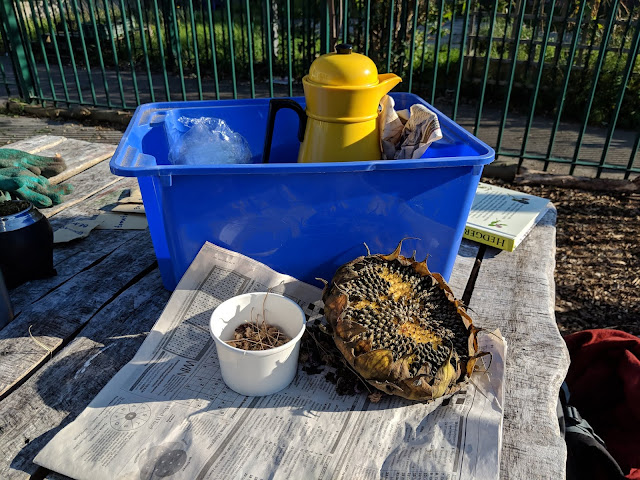 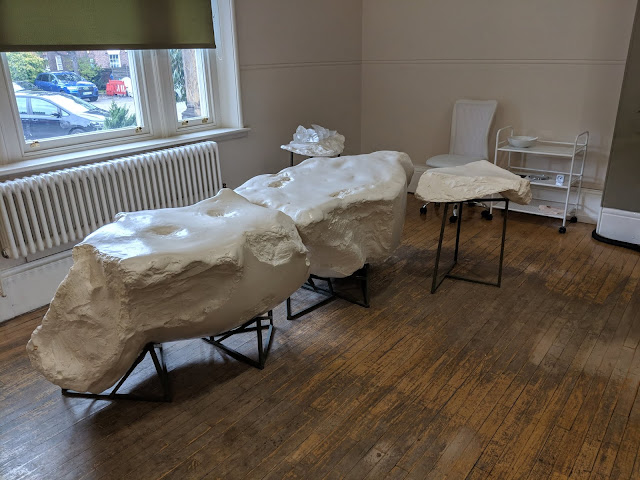