Fri, Dec 10 2010
Latitudes' 10-week editorial residency at the New Museum has come to an end! Below photos of each of the 10 weekly newspapers we have published and that has been available every Wednesday from the museum galleries. 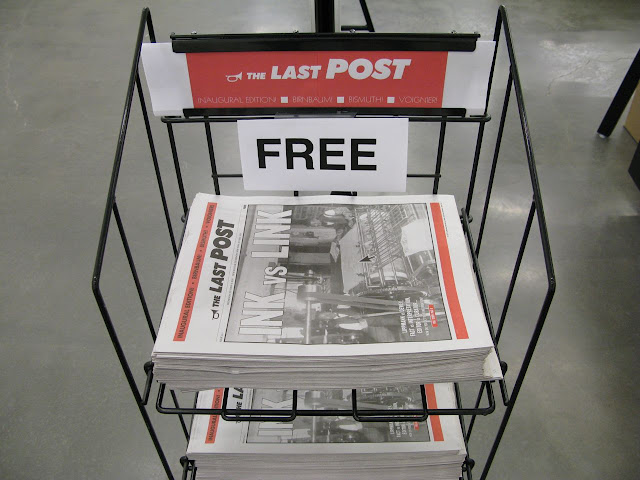 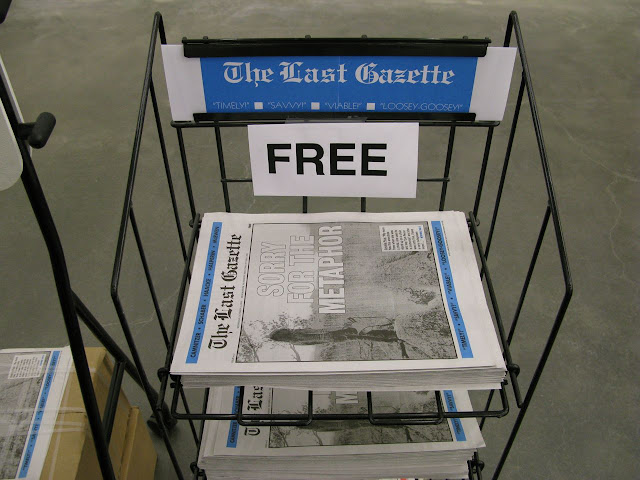 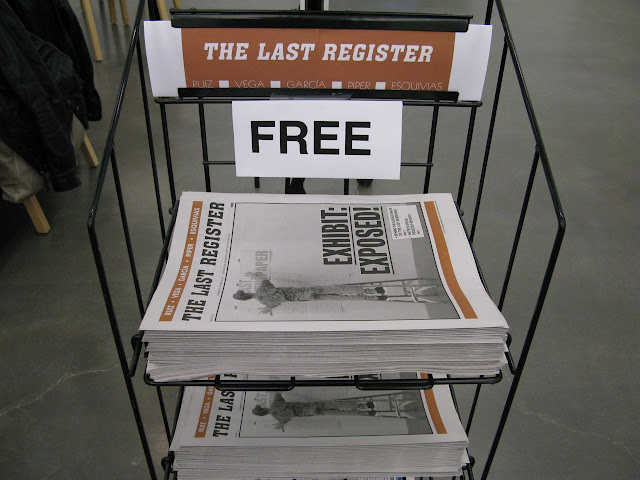 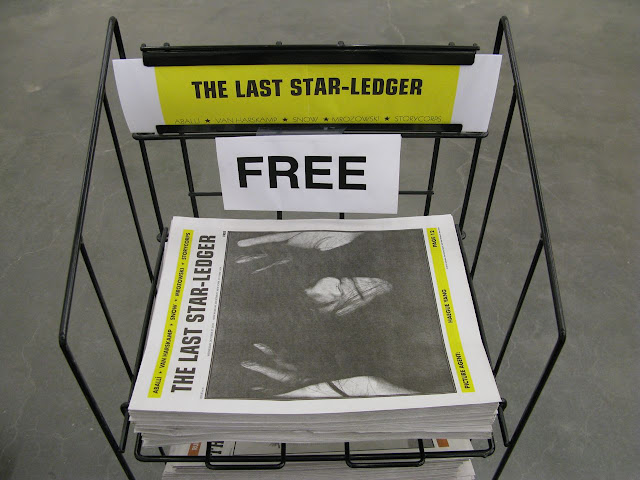 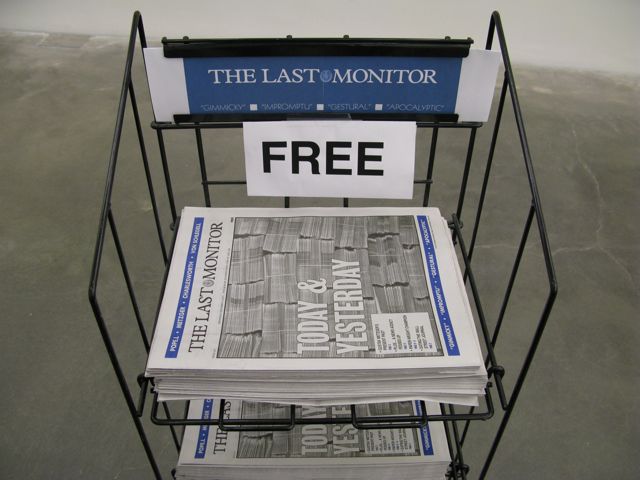 The Last Monitor (#4): See contents and read an read about the history of newspapers' paperweights here 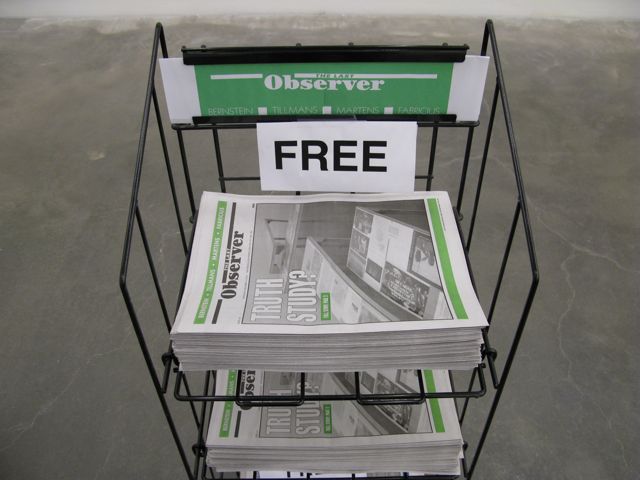 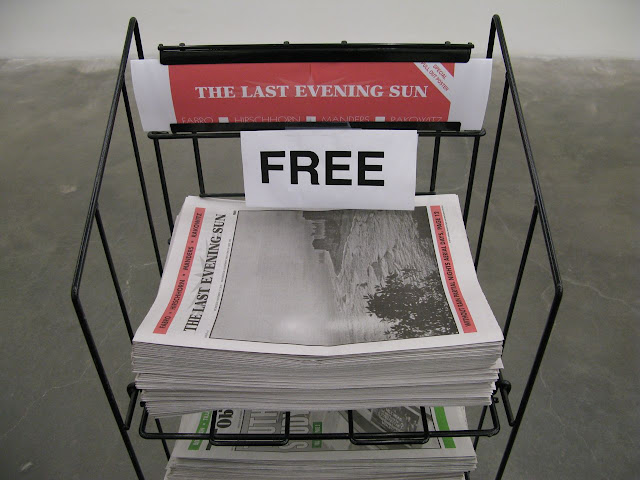 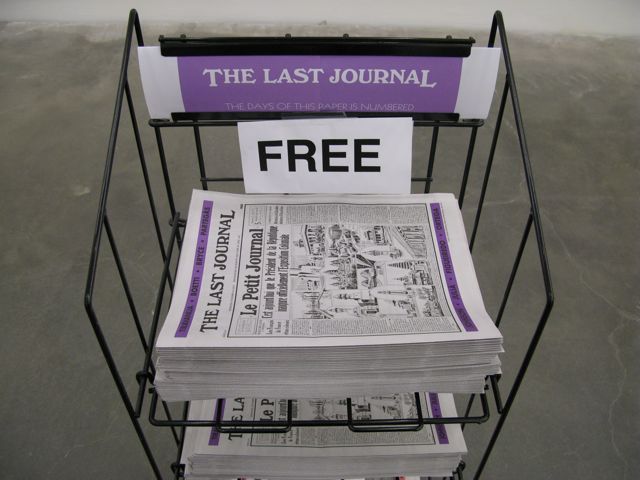 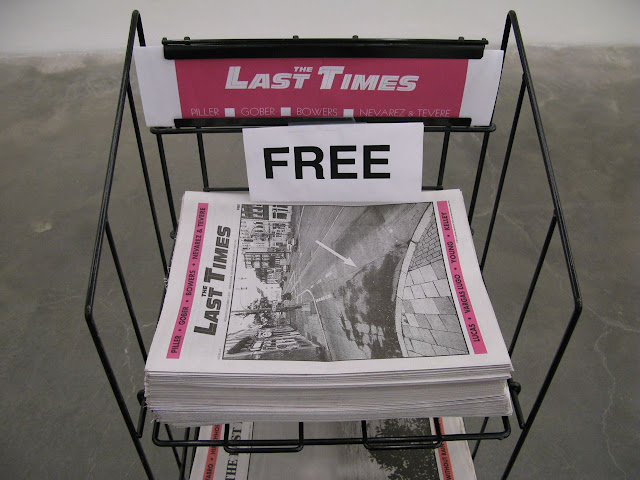 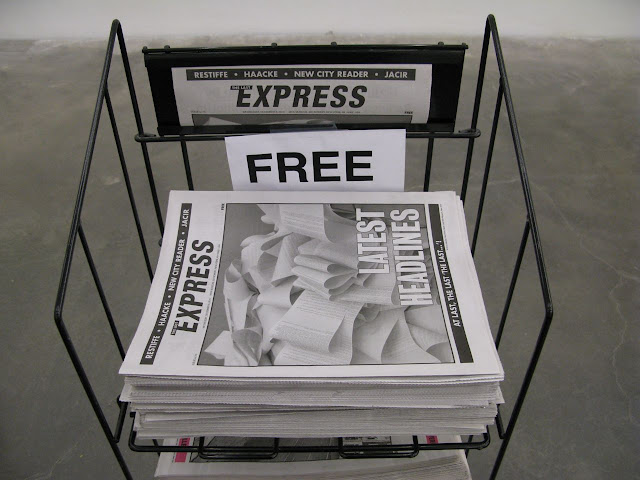 The Last Express (#10): See contents and read the report on the 27 November talk between filmmaker Adam Chadwick and web veteran Jason Fry here.

Each of 'The Last...' has been edited and freely distributed from a micro-newsroom on the New Museum's third-floor gallery space. 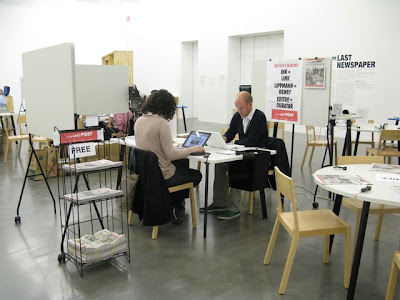 Latitudes' newsroom on the third floor of the New Museum, New York. Photo: Greg Barton
The Last Post, The Last Gazette, The Last Register, The Last Star-Ledger, The Last Monitor, The Last Observer, The Last Evening Sun, The Last Journal, The Last Times and The Last Express comprise the catalogue of The Last Newspaper exhibition, curated by Richard Flood and Benjamin Godsill.

The final catalogue compilation includes over 100 contributors’ articles and exclusive interviews with participating artists as well as texts and special features concerning an expanded selection of individuals and organisations whose work addresses the news, the medium of the newspaper and their evolving form and function.

The catalogue will soon be available from the New Museum's Store for $15. More details to follow on the European distribution – see update here. The exhibition continues at the New Museum until 9 January 2011.

Table of contents of the 10 issues: 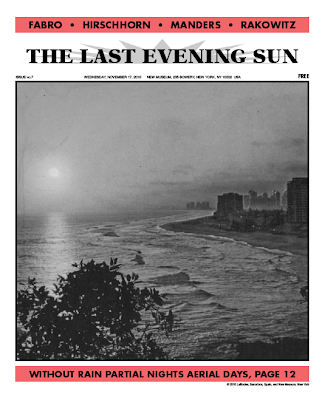 Issue 7: 'The Last Evening Sun'
(READ IT ON ISSUU) 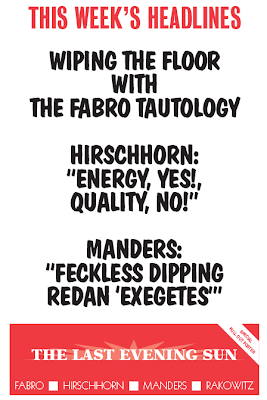 My grandfather had a sports car, a Lancia Fulvia coupé. He always kept it polished and would only use it on certain occasions. He was so afraid of getting it dirty that he never took off the plastic wrapping that covered the seats when he bought it, even after years of use. His zeal was not particularly unusual in Italy those years (the 1970s), as many people left on the protective plastic film that brand new sofas or chairs would have when purchased. This habit came from two decades earlier when memories of war and poverty were still lurking. The first consumer goods purchases were the result of laborious saving, so things had to last for as long as possible.

Pavimento–Tautologia (Floor–Tautology) by Luciano Fabro is based on the same logic that drove people like my grandfather to keep the car seats wrapped: a logic that gave up the pleasure of being able to touch the leather or the fabric of the seat in exchange for the satisfaction of knowing that, beneath the protective plastic, the surface was kept intact. In Fabro’s work, a portion of the floor (sometimes an entire surface) is cleaned, polished with wax and then covered with newspapers. Beyond the ephemeral protection of paper – “a cheap and lightweight Carl Andre” as Jörg Heiser has written – the floor disappears, we cannot appreciate its lustre, but we know it’s being kept immaculate, and we know this will be preserved, even if we walk on the papers.

In 1978, a decade after presenting the work for the first time in Turin, Fabro wrote "in my town... the floor is cleaned and then covered, at least for the first day, with papers, newspapers or rags to avoid getting it dirty... on that first day, in those two or three days that it was covered with paper, no one saw the floor clean. This particular way of accounting for the labour and its preservation, not for ostentation but as a private affair, seeks to ensure that the effort made doesn’t end up in anything too quick.” 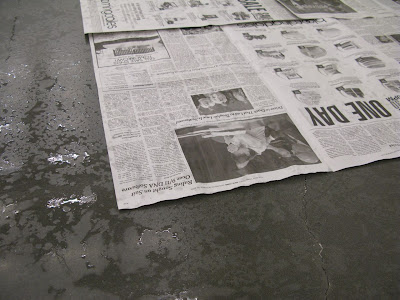 Newspaper placed on top of the mopped floor. Photo: Latitudes
The comparison between the newspapers on the floor and plastic on the new car seats, however, applies only within certain constraints. There is a fundamental difference between the work required for you to buy a car and the work involved in cleaning the floor. In Italy, in those years, the second had a clear gender dimension: it was a domestic job regarded as part of the housewife’s duties. Fabro was fully aware of this and it is no accident that he presented Pavimento for the first time in a gallery inside a private apartment, a space that preserved a domestic environment. Fabro was also aware of the position he was adopting as a male artist presenting it as a piece. The sculptor sided with the housewife, with her modest and under-appreciated task that was repeated daily. "We experience seeing our work destroyed daily" Carla Lonzi, a friend and admirer of Fabro, wrote in 1970 in the Manifesto di rivolta femminile (Manifesto of feminist revolt), a key text of Italian feminism.

Forty years onwards, what is the effect of Pavimento in the context of an American museum, one so different from when the work was presented for the first time? Is it still effective? The vernacular appearance of the work, its provincial and quotidian dimension is probably hard to grasp today, particularly outside Italy. The political aspect – gender politics – is certainly less visible now than it was in the late 1960s, although its historical importance cannot be questioned. Pavimento remains current with the idea of "care", caring as an essential dimension of the relationship with a work. Pavimento consists only of this: in taking care. "Every experience related to this handmade piece is linked to maintenance," Fabro wrote in 1967. A piece that is not to be contemplated, but to be done. Its only legitimate spectator is the one who realised it and looked after it. In short, perhaps it is its only spectator. (Since to the rest of us, the polished floor remains invisible.) Fabro referred to caring in a material sense, as a symbol of all the other ‘cures’ that a piece would require: of a critical or political kind, for instance. In this sense, Pavimento was for him a sort of manifesto, as he stated that a work can never be taken for granted, but must be constantly redefined, reiterated, and defended. In its ‘infrathin’ layer of paper and floor wax, Pavimento–Tautologia guards a surprising depth of meaning. 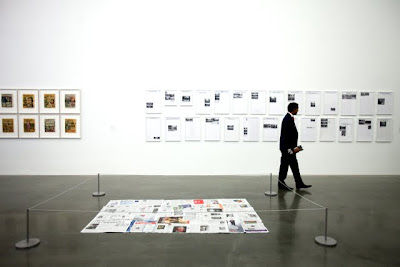 Installation view of Luciano Fabro's Pavimento-Tautologia (1967) on the 4th floor of the New Museum.
Courtesy of the Luciano Fabro Estate. Photo courtesy: Katie Sokolor / Gothamist.
Shannon Bowser: "I've been installing the piece every weekday since the exhibition opened in October. The layout uses all the pages of an issue yet the arrangement can be a little haphazard. We can lay the pages facing different directions and it doesn't need to be too precise or follow a set dimension, even though the barriers that surround the piece help as a guide to square it up to the wall. I throw down extra sheets here and there but it usually works out to be the same size each day overall no matter how many pages there were in the previous day's issue.

We have a specific subscription for the New York Times for this piece. Every morning I pick up a copy to keep it for the following day and I have with me the one from yesterday ready to go. I find myself reading the news while installing the work and so sometimes I have to pause to read properly, and I end up finding out about stuff that I would normally wouldn't. I wish I had time to read the New York Times every day because there are so many good articles. Sometimes I flip through pages when I'm laying them down, so if there's an annoying full page with glaring women facing upwards I can choose to turn it around. It's really interesting to see yesterday's newspaper all laid out on the floor and realize the actual physical size of it because you cannot really read The New York Times on the subway for example, because it's so big – it's so impractical!

Doing it definitely adds time to my morning routine so I've been coming in early every morning to be able to install the Fabro and then get everything else sorted as all these shows require a lot of maintenance. But it has been really interesting, I definitely feel like I'm participating in an artwork."

Watch a 'making of' video of the piece here.