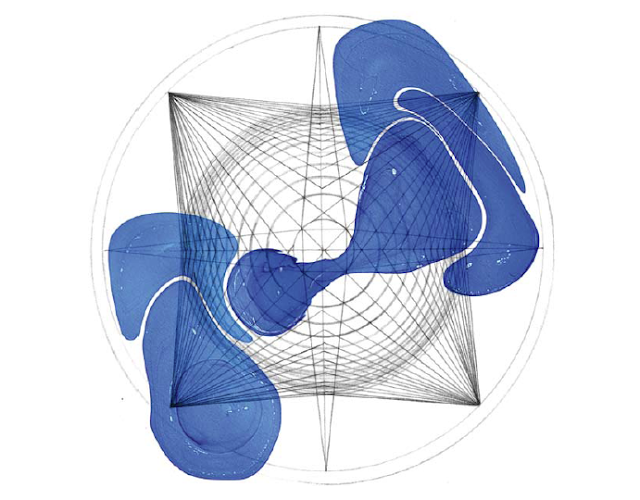 For Amikejo, uqbar (Irene Kopelman & Mariana Castillo Deball) will explore the idea of working together as a subject in itself. The “interchanges, mutations, transmutations, metamorphosis and contaminations that working together entails ... the hybrids we create together, not belonging to one or the other but rather creating an in between zone”, as the artists have described.

The exhibition at the Laboratorio 987 will be based on the principal of chirality or ‘handedness’. Chirality is a property of an object that is not superimposable on its mirror image. Human hands are perhaps the most recognizable example of chirality: the left hand is a non-superimposable mirror image of the right hand. Cases of chirality can be found in many different organisms in nature, such as in the twisted petals of certain orchids, shells and fish scales.
The exhibition will be composed of a spiral staircase, which will serve as a viewpoint for other artifacts and objects. Uqbar will create a psychedelic chiral ecosystem, featuring hanging papier-mâché epiphyte sculptures and enlarged stone microfossils, as well as “Banyan tree drawings, a video of a chemical reaction, fables among non-humans and drawings of hybrid creatures”.
On June 25 MUSAC also inaugurates: 'El Grito'; 'I WAS A MALE YVONNE DE CARLO. El arte crítico puede ser sofisticado, incluso entretenido'; 'Fernando Sinaga. Ideas K', 'Claire Fontaine, P.I.G.S.' and Yona Friedman (vitrines). 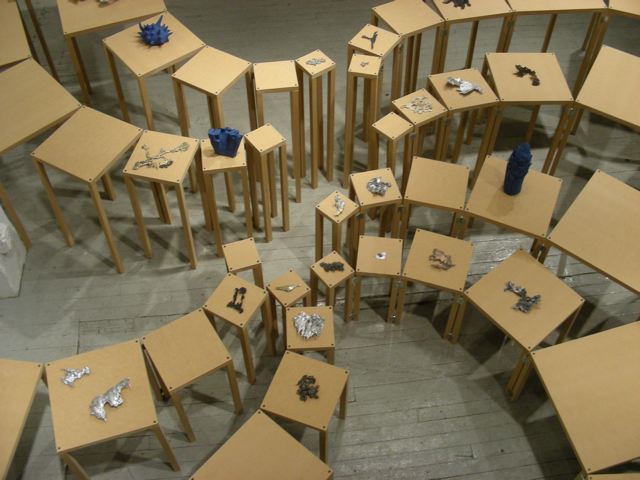 Zeno Reminder, Cabinet Magazine Space / Performa 09, New York (2009). Courtesy the artists.
ABOUT THE ARTISTS
Uqbar is an occasional collaboration between artists Mariana Castillo Deball & Irene Kopelman initiated in 2005. Its practice has led to sculptural installations, seminars and publications, and frequently involves the cooperation of individuals outside the artistic field, including scientists and writers. Uqbar’s projects are often sparked by an oblique investigation into a particular repository of knowledge, and following Jorge Luis Borges (whose fictional place Uqbar lends its name to the foundation) they approach a world through an abundance of possible of meanings and possible histories. Fuga di Un Piano (2009) for Manifesta 7, Rovereto, Italy, for example, took the International Center for the study of Futurism as its point of departure, by presenting in part a future archive of some imagined sculptural creations of a speculative creative automaton.

'Amikejo' is an exhibition cycle of four exhibitions guest curated by Latitudes, taking place in January, April, June and September 2011 at the Laboratorio 987, MUSAC.