Tue, Sep 20 2016
Compositions presents five artistic interventions in unique sites across the neighbourhoods of the city of Barcelona. Each of the commissioned artists is represented by a gallery participating in the second edition of the Barcelona Gallery Weekend.

Curated by Latitudes for the second time (see 2015 edition), the project further explores Barcelona as a rich fabric of the historic and the contemporary, the unfamiliar and the conspicuous. Resisting an overall theme, and instead developing from the artists’ responses to the specificity of each context—people, as well as places—the five art projects form a temporary thread that links evocative locations and public space, running parallel to the Weekend’s exhibitions in galleries and museums.

Opening hours:
Thursday 29 September: 5–9pm
Friday 30 September, Saturday 1 and Sunday 2 October: 11am–7pm
Lúa Coderch’s project for the Compositions programme brings a mysterious and improbable apparition to life in the home of the Club de Billar Barcelona. Beneath the Teatre Coliseum in Gran Vía there is a rainbow. Coderch guides sunlight and a spectrum of colours down into the underground gaming space with a series of precisely positioned mirrors and prisms as if evoking the mechanics, geometry and artistry involved in billiards. Accompanying the rainbow is a turntable and a transparent vinyl record that can be used to play an audio recording of a female voice. This voice narrates and interprets what can be seen in front of us, and the process that led to its appearance. The title of her intervention, “The Rainbow Statement” (2016), refers to one of the verbal tricks used by fortune-tellers and clairvoyants in ‘cold reading’ an individual’s life or personality. Suggestively nebulous assertions maximize the chance of apparently specific and meaningful paranormal insights hitting the mark. “The Rainbow Statement” is either an experiment of the imagination or a phenomenon of optical science with which Coderch seems to have invented a form of psychic meteorology, or spectral physics.
Sunday 2 October, 12am:
Free guided visit by the Lúa Coderch and Latitudes at the Club Billar Barcelona, Gran Via de les Corts Catalanes, 595-599. 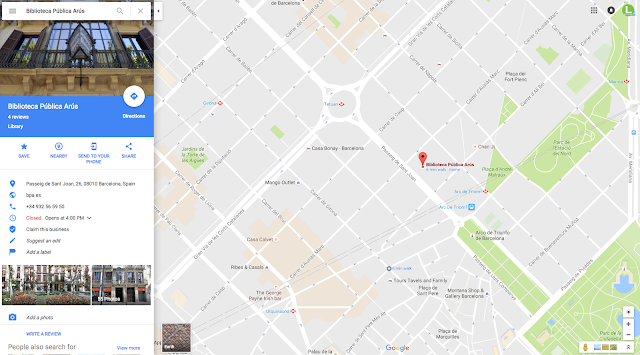 For her intervention for the Compositions programme, Lola Lasurt has collaborated with the Biblioteca Pública Arús, a study centre founded in 1895 with an outstanding collection related to the labour movement, anarchism, Freemasonry and Sherlock Holmes. The project centres on a series of grisaille paintings that form a pictorial frieze that hangs from the balcony above a presentation of books in the Arús’s display cases. Under the title “Donació” (Donation), 2016, Lasurt departs from 135 publications that once formed the personal library of Assumpta Corbera Santanach that were gifted in 2010 to the Arús after her death. Corbera Santanach identified as a feminist and a Freemason; she was not a public figure. Yet the impulse of Lasurt’s project is not primarily biographic or historiographic, but bibliographic and pictorial. Accordingly, “Donació” attempts to narrate changes in social and cultural attitudes through the selection and redrafting of images that appear on the pages of the bibliographic bequest. Treating the publications as an intimate accumulation of ‘alternative’ knowledge and a representation of a self-education, Lasurt is interested in the portrayal of a private political imagination in the midst of what is now a public collection. – Latitudes
Thursday 29 September, 6pm:

Public transport:
Metro: Santa Eulàlia o Torrassa (L1)
Bus: L16, L52, L82, L85, LH1, N13
The manufacturing and printing of textiles formed the basis of the industrial revolution in Catalunya. Beyond the actual fabric, it is the machinery of its production and the people who operated it—especially women—that underpin Regina Giménez’s presentation of her graphic works as part of the Compositions programme. Taking place in one of the buildings that comprise Can Trinxet, a former textile factory complex that once employed the largest workforce in L’Hospitalet de Llobregat, Giménez’s intervention comprises painted compositions that are derived from schematic representations of machines and their components. Her abstractions have been applied on transparent panels that lean against a scarred factory wall, becoming devices that reanimate the marks and memories embedded in the building. An accompanying poster evokes the clamour that once would have filled the workshop in typographic form. Giménez has titled her project "La Constancia" (2016) in tribute to the labour union that called a general strike in 1913 to protest the conditions of the female and child workers who undertook the textile industry’s most monotonous and arduous tasks. – Latitudes
Friday 30 September, 12am:
Free guided visit by Regina Giménez and Latitudes at Can Trinxet, c/ Santa Eulàlia 182–212, L’Hospitalet de Llobregat. 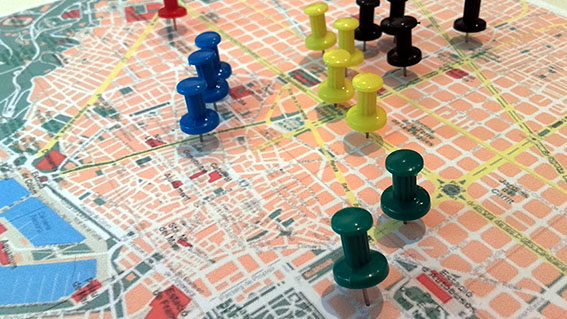 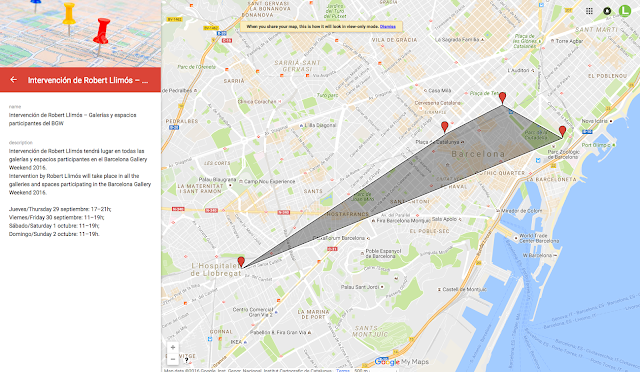 Zoom in map here.
Robert Llimós' intervention will connect all the participating galleries of the Barcelona Gallery Weekend.

Hours:
Thursday 29 September: 5–9pm
Friday 30 September, Saturday 1 and Sunday 2 October: 11am–7pm
Robert Llimós presents a new version of an action that was originally created in the summer of 1972. One of the very few performative works of an artist primarily known for his paintings and sculptures, "Los Corredores" (The Runners) was first realized as part of the legendary avant-garde art festival known as Los Encuentros de Pamplona (The Pamplona Encounters). On that occasion, three people dressed in identical running gear speed-walked throughout the city, connecting the various venues of the festival. As his project for the Composiciones programme, Llimós’s Los Corredores is now restaged on the streets of Barcelona. Three athletes criss-cross the city, seemingly rushing to see every venue of the Gallery Weekend. As in Pamplona, the white sports kits have been adorned by Llimós with black diagonal brushstrokes that symbolize the idea of painting. At times the speed-walking trio carry flowers, or have their ankles joined with elastic ribbon—a painting-as-workout that has left the studio for the street with decoration, discipline, and a dynamic sense of urgency. – Latitudes

Friday 30 September, 5pm:
Free guided visit by Robert Llimós and Latitudes. Meeting point: BlueProject Foundation, c/Princesa 57.
The intervention by Wilfredo Prieto will take place at the Unitat Muntada de la Guàrdia Urbana de Barcelona (Barcelona City Police Stables)
c/ Wellington s/n
08018 Barcelona
Opening hours:
Thursday 29 September: CLOSED
Friday 30 September, Saturday 1 and Sunday 2 October: 11–12am*
[*] Doors open daily at 10:30am. Kindly note that a photo ID (DNI or passport) is required to enter.]
Conceived by Wilfredo Prieto as his project for the Composiciones programme, "Pantalones rotos" (Torn Jeans), 2012, is realised by the horses of the Guàrdia Urbana de Barcelona. The action-sculpture takes place at the Mounted Unit’s stables, a historic venue next to the city zoo that is not normally open to the public and whose exercise paddock is overlooked by the twin towers of the Torre Mapfre and Hotel Arts. In his work, Prieto makes reference to an image which appears on the tag of every pair of classic Levi’s denim jeans—two horses trying in vain to break a pair of reinforced trousers. Since their invention in 1873, Levi Strauss & Co.’s famous copper-riveted denim has become synonymous with the working people of the western United States—cowboys, lumberjacks, and railroad workers. Yet in "Pantalones rotos", this symbol of the American frontier myth has been already torn apart with bathos as two harnessed horses each drag one half of a torn pair of jeans. – Latitudes 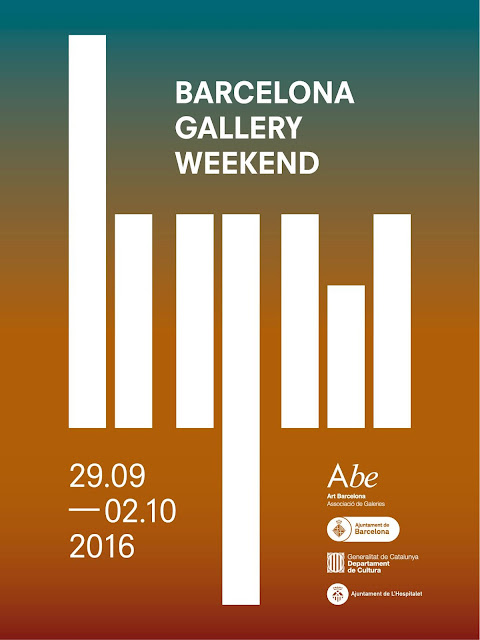 The Barcelona Gallery Weekend is an initiative of the de Art Barcelona and is supported by the Ajuntament de Barcelona (ICUB), the Generalitat de Catalunya (ICEC), the Ajuntament de L’Hospitalet de Llobregat and Acción Cultural Española (AC/E), as well as by private sponsors and individual patrons. http://www.barcelonagalleryweekend.com/