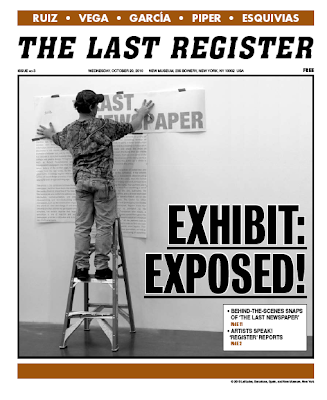 Issue 3: The Last Register
(READ IT ON ISSUU) 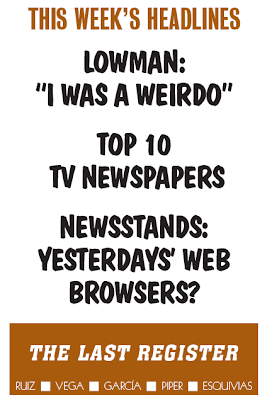 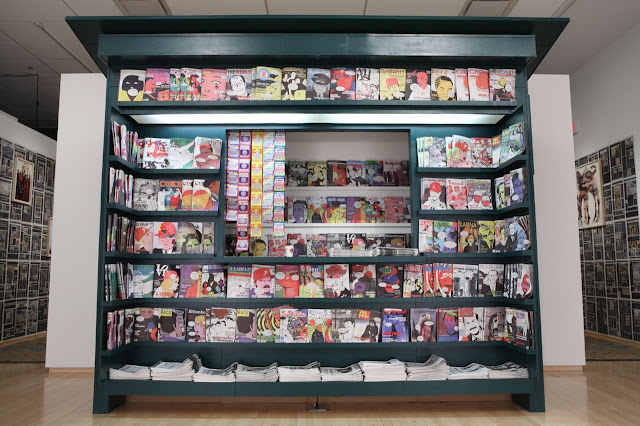 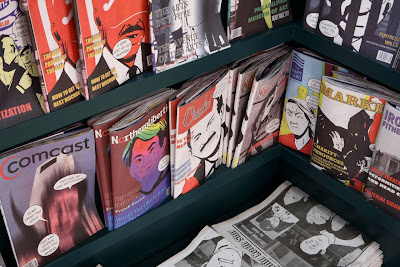 “Before the internet, newsstands were the closest thing we had to web browsing”

Barcelona-based artist Francesc Ruiz is creating ‘The Woods’, a specially-commissioned cartoon strip for the back cover of each of ‘The Last...’ newspapers. The Editors-in-Chief of ‘The Last Register’ caught up with him as he prepared for an exhibition in Cairo.

Latitudes: Is 'The Woods' a family, or is it a place?

Francesc Ruiz: They're kind of a family or a community, as well as a place. The name was inspired by the last part of François Truffaut’s 1966 film based on Ray Bradbury’s 1953 novel Fahrenheit 451. It’s set in a totalitarian society in which books have been made illegal and are being burned. A group of people go into hiding in the woods and decide to memorize great works of literature. They create a community that transmits books orally from generation to generation. Each of them incorporates a different book: there are five ‘Moby Dick’s, four ‘Don Quixote’s, and so on. It talks about the power of human knowledge to adapt to difficult and new situations, which is something that – although under a completely different perspective – is happening right now with the threat to printed matter and the adaptation of content to new formats. In ‘The Woods’ I'm using the city newsstand, magazines and newspapers, as a way of talking about different lifestyles, about specialization and ideology. I want to create a kind of masquerade ball in which everybody is represented or at least plays a role in the social architecture, something also very related to web 2.0 and platforms such as Facebook.
L: Where if anywhere do you draw the lines between art and design, or artists and designers?

FR: It’s all about self-consciousness and a critical perspective. As long as cultural object producers (which is what I consider both artists and designers to be) look at their work as something critically produced, to me it makes no sense to establish differences. Looking at it from a slightly different angle, someone asked me recently if I’d ever produced a ‘mainstream’ comic. I think comic books and design can be understood in different ways, just as both experimental cinema and popular cinema coexist. I try to work on the experimental side, but whether this work is read as art or not depends entirely on the context in which it’s received.
L: Can our readers follow the cartoon strip as an ongoing narrative?
FR: No it doesn't follow a linear narrative – each issue shows a situation. The whole cartoon strip creates a series of scenes which build on my recent experiences working with a newsstand scenario before in Philadelphia, and now in Cairo. I did consider creating something more narrative-led using characters that keep reappearing but decided against it. 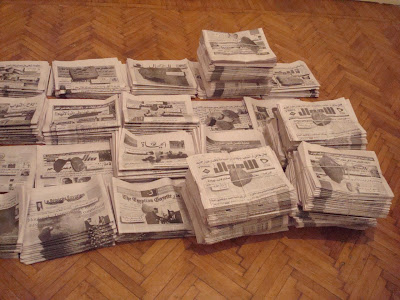 L: Specialist magazines target a public that has already been identified, yet they can also create new and perhaps unexpected followings. How does the newsstand feature in this relationship?

FR: Before the internet, newsstands were the closest thing we had to a web browsing experience. You could go there, buy specialist papers and magazines, check out the contacts sections, the classified ads, and see all the niches you could initiate yourself into. Through the printed press you were able to discover new things, it was the main knowledge distribution channel. With most of this now moving online the fetishistic element is not the same. Although there are some web-based attempts to create a similar interface to the newsstand, its visual power of the newsstand is unique. For me, a newsstand is a form of information architecture, a superstructure or a special building with inhabitants that change periodically. It’s an amazing tool with which to analyse the world and contemporary society. The matter of what will happen to newsstands as printed material begins disappears is something that is already visible: they're converting into lottery card retail points, as well as beverage and snack stands. But maybe they will have a different use in the future? I'm thinking of creating ‘The Newsstand Museum’, a museum with different newsstands from different countries and periods. Every stand will show the content exactly as it was in a specific time and place. For example September 10, 2001.
L: Can you tell us more about the Philadelphia project you mentioned, made for the Philagrafika 2010?
FR: I presented a newsstand for which I created all the printed content: a magazine formed by 120 covers and a newspaper which reproduced 12 different front pages. With these two publications, I was able to build the ‘skin’ of the newsstand. I added speech bubbles to the covers and recreated some important characters of the city mixed in with references to different neighbourhoods, institutions, shops and bars. My idea was to create an analogy of the city and my experiences, initial reactions and perhaps prejudices about Philly after having been there for just a short residency period. I added a narrative layer around three main subjects: the city as the place where graffiti culture started, the city through which the AIDS crisis was imagined in the 1993 film Philadelphia, and finally the city’s Mural Arts Program, a (successful to some) anti-graffiti initiative. Through the different layers of newsstand, I attempted to approximate the complexities of the city, as well as race, gender and class issues. I'm now creating a new newsstand for the Contemporary Image Collective in Cairo and it will take the form of a typical Egyptian street newsstand, only it will be made with newspapers covers that I've modified with a dialogue between the stones that are used as paperweights. 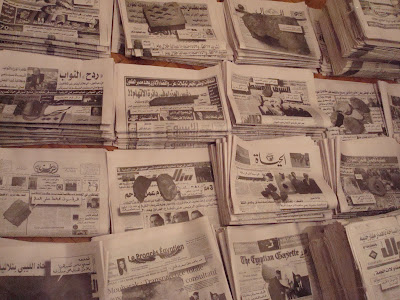 Cairo Newsstand (2010), installation at the Contemporary Image Collective, Cairo.
Courtesy the artist and Galeria Estrany-de la Mota, Barcelona.
L: What difficulties and luxuries has this very particular format of the serial cartoon strip present to you as an artist?

FR: I made a comic strip series with artist Pauline Fondevila in which we explored the bars of a city nearby Barcelona. Basically, it was an autobiographical comic strip in which we drew ourselves getting drunk and having adventures. We published forty different comic strips and they were published daily, the problem was that after a while the energy and the inspiration weren't there any more – and we had very bad hangovers! On the one hand, it was very nice and a special format to play with in order to recreate worlds, but on the other, you end up feeling a little like a slave to the daily production process. This ten-week trial for ‘The Last Newspaper’ is a great period to develop another small universe – that's essentially what I'm trying to do. The weekly frequency is fine compared to a daily routine. I recently showed a daily comic strip for Creative Time Comics, but all of these projects need a lot of commitment.
L: Is there a particular newspaper cartoon you admire or took inspiration from?
FR: I don’t think Tales of the Beanworld by Larry Marder was ever published in a newspaper. I'm a big fan of George Herriman’s Krazy & Ignatz originally published daily in the New York Evening Journal, and that has always has been a source of inspiration to me. The genre ambiguity, the bricks, the accent of the characters and those amazing landscapes, I love it all! Of course, there are now a lot of people working on digital comic books and digital comic strips. It's interesting to see how scrolling works very well when reading linear narratives, actually better than the page-by-page structure. Scott McCloud is for me first author who successfully started to explore the potential of the comic book medium. But my favourite author is Kang Full, the Korean Manhwa webcomic artist. The funny thing is that he later prints his comics in paper format which entails a very interesting re-adaptation. And this seems a very apposite process for this period in between two regimes, the page-based former one and the web-based new one.

25 Dec 2008
Haegue Yang's new exhibition at sala rekalde 'Symmetric Inequality' (18.12.08-19.04.09) "belongs to a group of installations the artist has been developing over the course of this year, focusing her interest on investigating new possibilities for parallel crossings between abstraction and narration. Together with Kunstverein (Hamburg), Cubitt (London), the Carnegie Museum of Art (Pittsburgh), Portikus (Frankfurt) and REDCAT (Los Angeles), sala rekalde now contributes to the closure of a serial project that has taken the medium of portraiture as the point of departure for its own articulation." (from e-flux 18.12.08).

Below an excerpt from the catalogue essay by Latitudes' Max Andrews "Towards Haegue Yang's 'Blind Rooms'", which will be included in the forthcoming publication (out Spring 2009) followed by a video of the installation:

"Yang has developed a finely-tuned articulation of space through deft assemblage that has encompassed mirrors, multifarious electric lamps, scent atomizers, infrared motion detectors, heat sources and Venetian blinds. Variously sensory and sensible (i.e. readily percieved), such devices are not necessarily socially meaningful in themselves, yet they allow an interactive atmospherics that suggest zones of indeterminate necessities – part domestic interiors, part private theatres – and “localized effects” akin to political action."
As the Arts Council Korea announced on the 23 December Eungie Joo, Director & Curator of Public Programs at the New Museum of Contemporary Art, New York, recently appointed commissioner of the Korea Pavilion at the forthcoming Venice Biennale has invited Yang to represent Korea at the 53rd International Venice Biennale. Joo is the first non-Korean national commissioner for the Korean Pavilion.

Haegue Yang was featured in an interview by Doryun Chong in the Summer 2007 issue, which Latitudes guest edited, of UOVO/14 titled 'Ecology, Luxury and Degradation' (see inside the issue here).