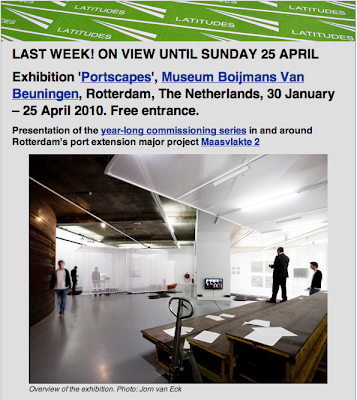 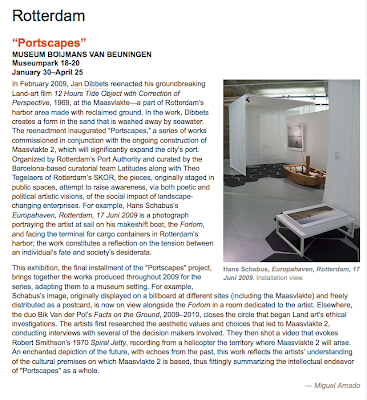 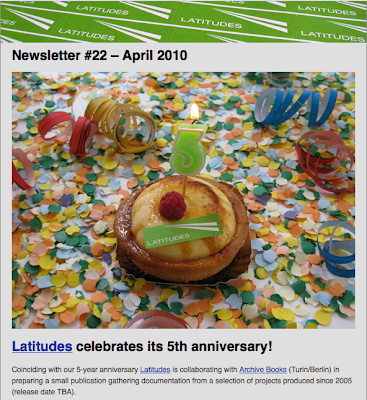 This month, Latitudes celebrates its 5 year anniversary! Together with Archive Books (Turin/Berlin) they are preparing a small publication gathering documentation from a selection of projects produced since 2005 (release date TBA).

CURRENT
Text 'Under Construction' on Lara Almarcegui's practice on the April–May issue of Milan-based magazine Mousse #23.

Latitudes invited Martí Anson to create Latitudes’ temporary office-encampment for their participation in 'NO SOUL FOR SALE – A Festival of Independents', taking place at Tate Modern's Turbine Hall, 14–16 May, London, UK + info...

Participation of Latitudes' Max Andrews in 'The Falmouth Convention', 20–23 May, Cornwall, UK + info...

Collaboration in the exhibition 'The Last Newspaper' at the New Museum, New York, October 2010–January 2011 + info...

Portscapes exhibition of the ten public commissions that took place throughout 2009 in the port of Rotterdam, on view until 25 April at the Museum Boijmans Van Beuningen, Rotterdam, The Netherlands + info...

Lara Almarcegui 'A Guide to the Wastelands of the Port of Rotterdam' (2009). Photo: Latitudes

Marjolijn Dijkman, 'Here be dragons' (2009), image presented on a billboard. The second part of her project, the film 'Surviving New Island' (2009–10) will be premiered during the exhibition.

Paulien Oltheten, Great if two pairs of legs are synchronized for a moment, (2009). Photo: Ben Wind.

Jorge Satorre in collaboration with Jorge Aviña, 'The Erratic. Measuring Compensation' (2010). Courtesy of the artist.

'Portscapes' will present the results of works commissioned by the Port of Rotterdam realised throughout 2009 by 10 (inter)national artists on the occasion of the beginning of the construction of Maasvlakte 2 – the 2,000-hectare land supplementation project to extend Rotterdam's port, Europe's largest seaport and industrial area. 'Portscapes' has encompassed new projects of various scales under the leitmotif itineraries and destinations – artist-led tours, film screenings, billboards and the production of film and photographic works, audio-guides, radio broadcast and field guides. + info...

The films by Rotterdam-based artists Bik van der Pol and Marjolijn Dijkman, 'Facts on the Ground' (2009–10) and 'Surviving New Land' (2009–10) respectively, will be presented for the first time coinciding with the exhibition.

Overtreders W, the designers of the exhibition, have created semi-transparent display structures for the museum’s Richard Serra Hall, using industrial materials based on the format of cargo containers.

A catalogue (€12,50) and a special-edition catalogue (€50) designed by Ben Laloua/Didier Pascal is co-published by SKOR and the Port of Rotterdam Authority on the occasion of the exhibition. The special-edition includes filmed interviews with the artists as well as the DVD of '6 Hours Tide Object with Correction of Perspective' (2009), the film produced by Jan Dibbets for 'Portscapes'. Publication available at the Museum Boijmans's shop or can be ordered via SKOR by writing to [email protected] or calling +31(0)20 672 25 25

Portscapes was commissioned by the Port of Rotterdam Authority with advice and support from SKOR (Foundation for Art and Public Space, Amsterdam) and was curated by Latitudes, Barcelona.

Portscapes: Jorge Satorre returns an ice-age boulder back to Sweden

Jorge Satorre's project for Portscapes had its beginnings in the eastern part of the Netherlands with a 3-tonne gneissic granite rock from the Svecofennian age, approximately 1.9 billion years ago. Following the artist’s fascination with the environmental compensation practices being instigated alongside the construction of Maasvlakte 2, his project consisted of returning the rock to where it once came from in Sweden – an act of synthetic restitution and transnational sculptural offsetting.

The boulder has now found a permanent home at the Wanås Foundation, near Knislinge in southern Sweden [1]. The boulder was transported from Erica, in the northeast of The Netherlands, to Knislinge at the beginning of January (see report on the Swedish newspaper Kristianstadsbladet).

Not insignificantly, the celebrated Land art work 'Broken Circle' (1971) by Robert Smithson, sited in a working quarry near Emmen, incorporates such a seemingly immovable boulder at its centre. Satorre’s reverse geological gesture is also reflected in the fact that much of the existing and future sea defence in the port area will be made from rock brought from Scandinavia. The artist offers an account of the process through drawings, which incorporates both actual and imagined details. One such detail depicts an imagined protest at the beginning of the boulder’s homeward journey – see post 2 October 2009. 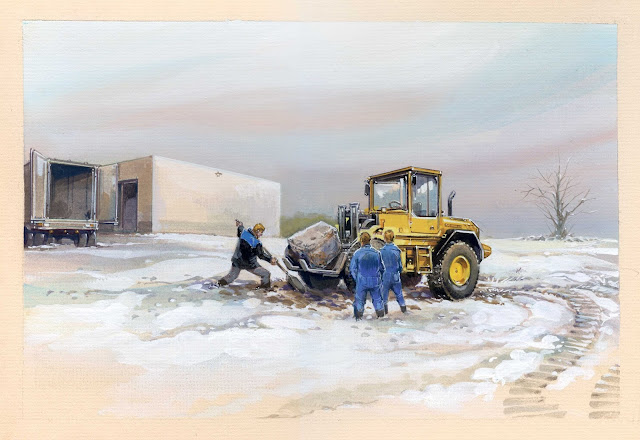 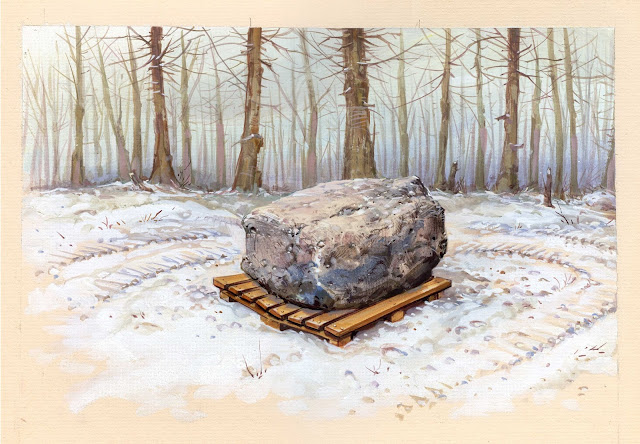 An exhibition with 'Portscapes' projects will be on view at the Museum Boijmans van Beuningen, Rotterdam between 30 January and 25 April 2010 (Reception: Friday 5 February, 20h).

Portscapes was commissioned by the Port of Rotterdam Authority with advice and support from SKOR (Foundation Art and Public Space, Amsterdam) and was curated by Latitudes.

[FOOTNOTE 1] The foundation estate encompasses a medieval castle, an organic farm, and a sculpture park which since 1987 has hosted a number of permanent works by international artists.