Witte de With and Spring Workshop's 'Moderation(s)' publication 'End Note(s)' is out! 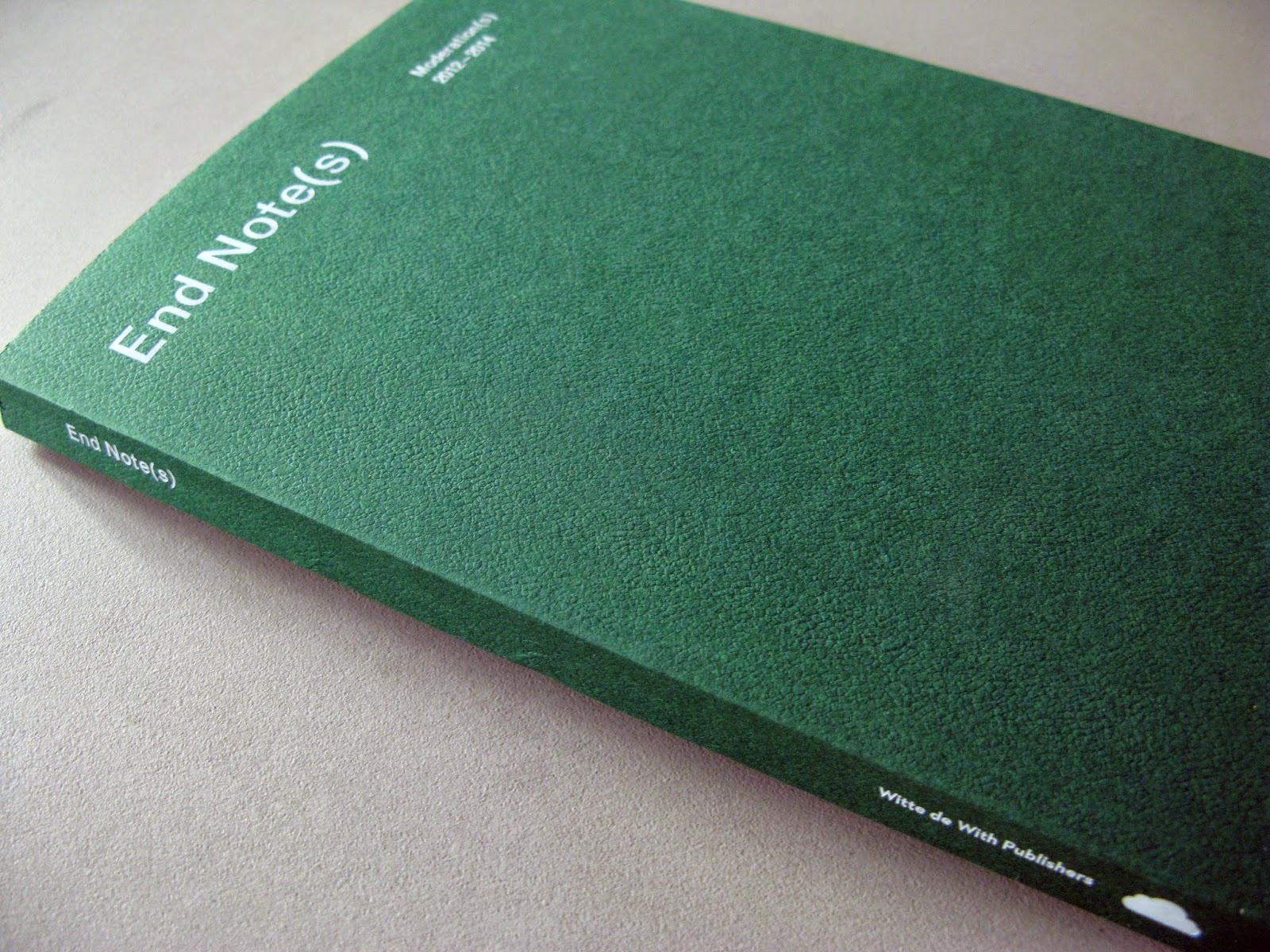 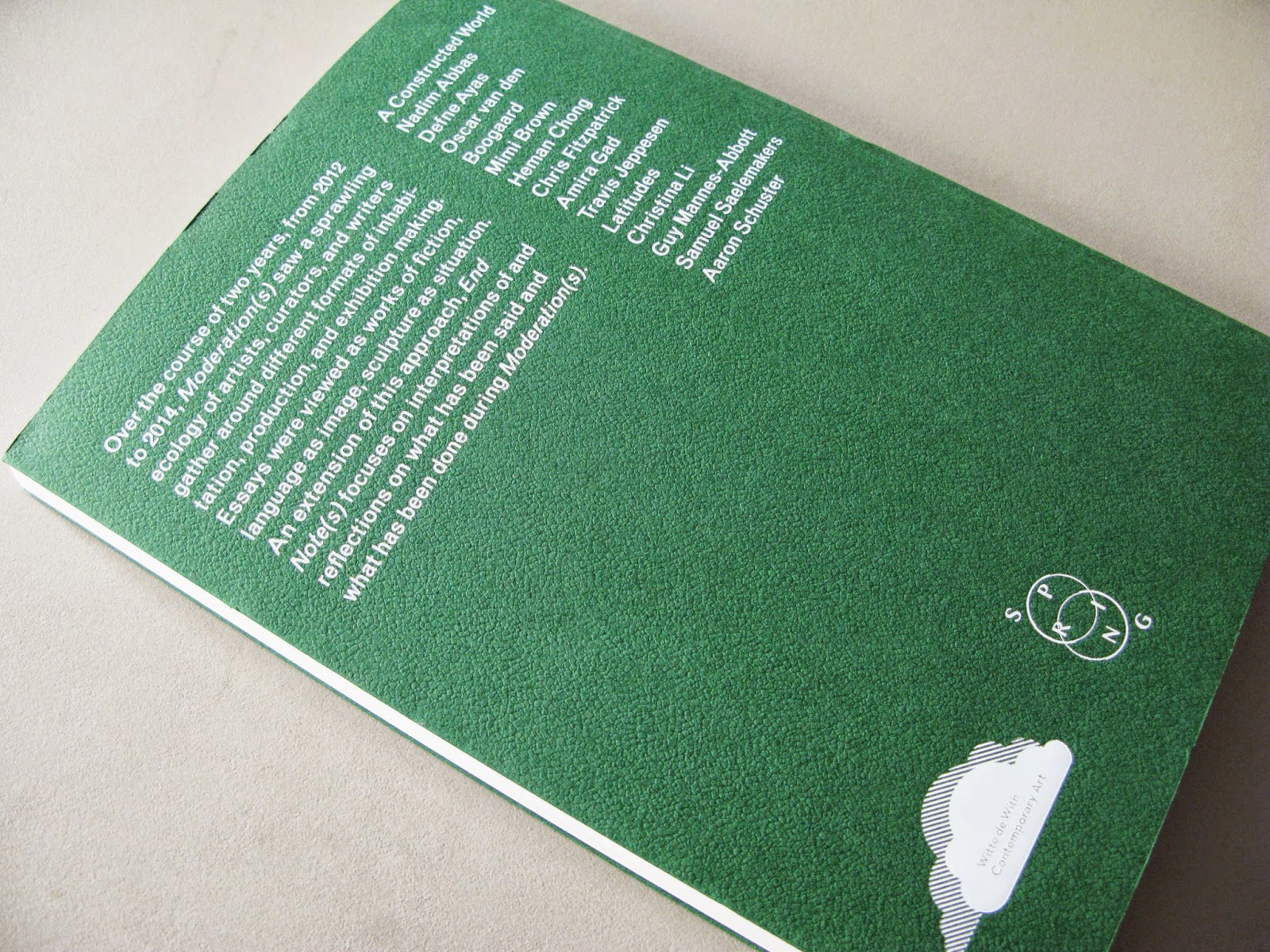 Cover and back cover of 'End Note(s)'.
'End Note(s)' is finally out! The publication marks the conclusion of two years of residencies, discussions, editorial and exhibition projects within the framework of 'Moderation(s)', a multiform collaboration between Hong Kong's Spring Workshop and Rotterdam's Witte de With, steered by Singaporean artist and curator Heman Chong.
Latitudes participation took place in January 2013 with a month-long residency at Spring Workshop, Hong Kong, and with the production of "Incidents of Travel": an invitation extended to four Hong Kong-based artists – Nadim Abbas, Ho Sin Tung, Yuk King Tan and Samson Young – to develop day-long tours, thus retelling the city and each participant’s artistic concerns through personal itineraries and waypoints.

As announced a few months ago, Latitudes has contributed to the publication with a visual essay documenting each of the artists' itineraries accompanying them with a revised and re-edited version of the May 2013 conversation with curator Christina Li (Moderation(s)' witness). 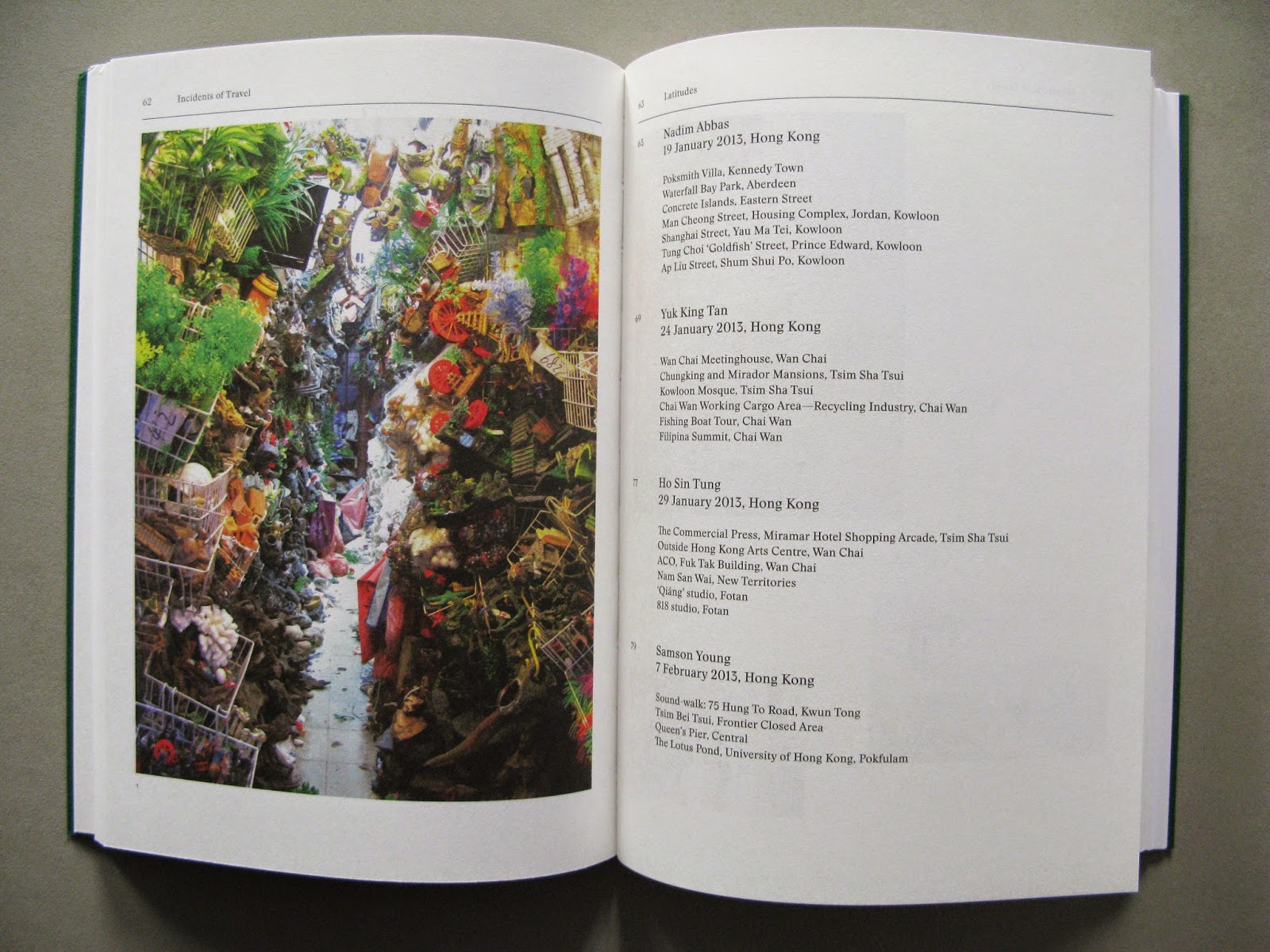 Section of the book (pp. 61–89) is dedicated to Latitudes' "Incidents of Travel". Here are the names of the artists and the locations visited during each of their tours. 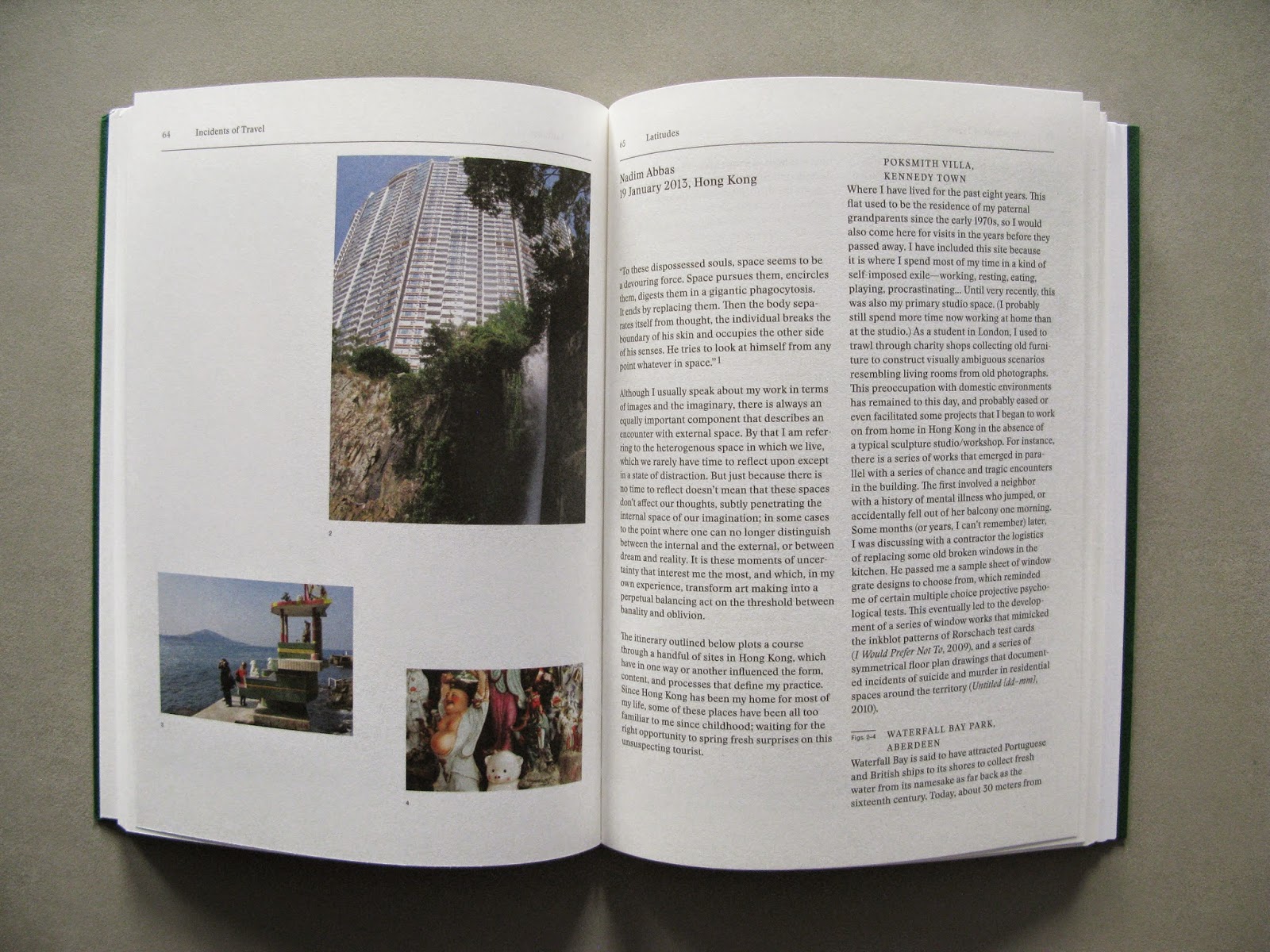 Itinerary and photo-documentation of Nadim Abbas' tour on 19 January 2013. 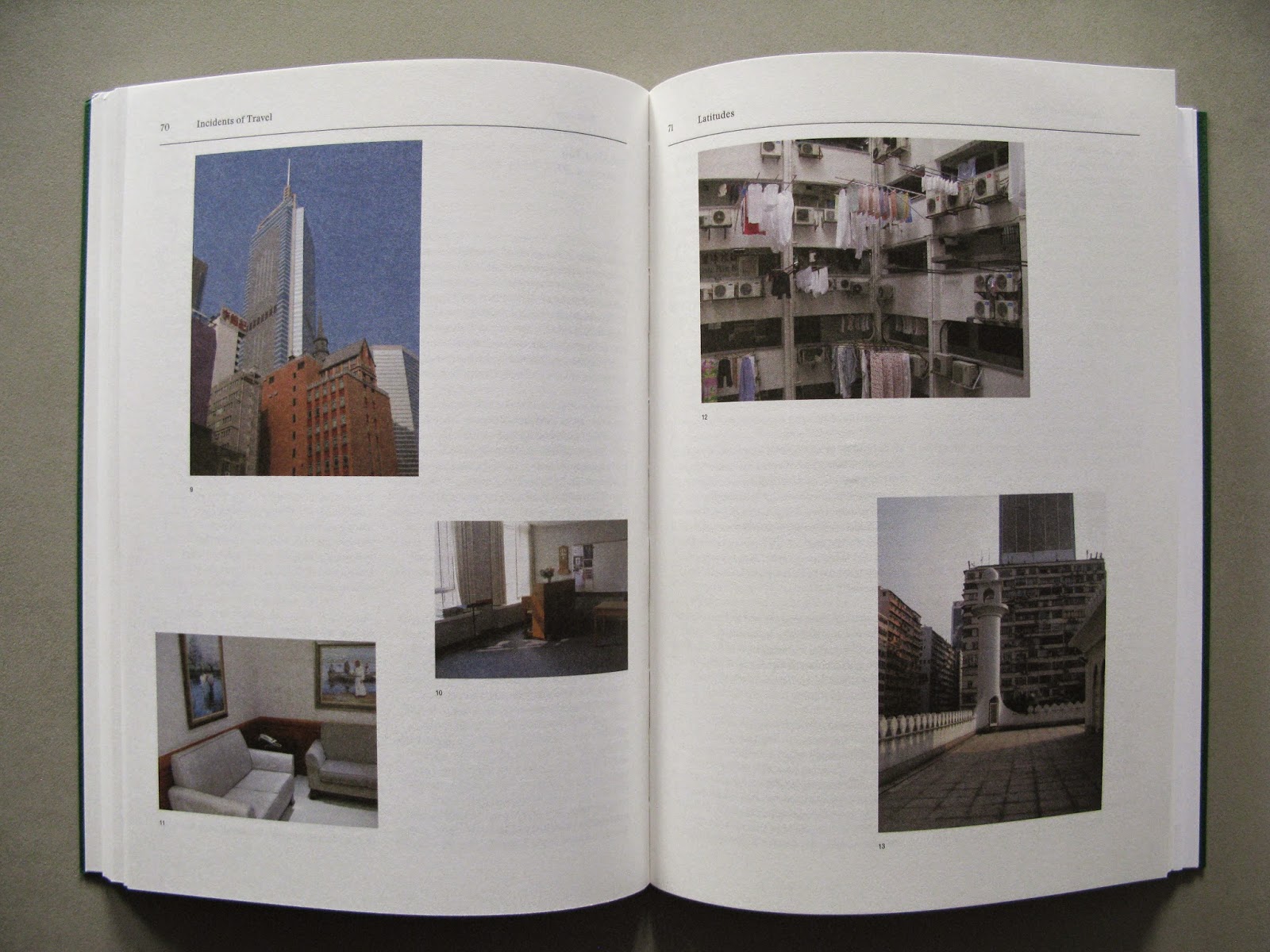 (Above and below) Itinerary and photo-documentation of Yuk King Tan's tour on 24 January 2013. 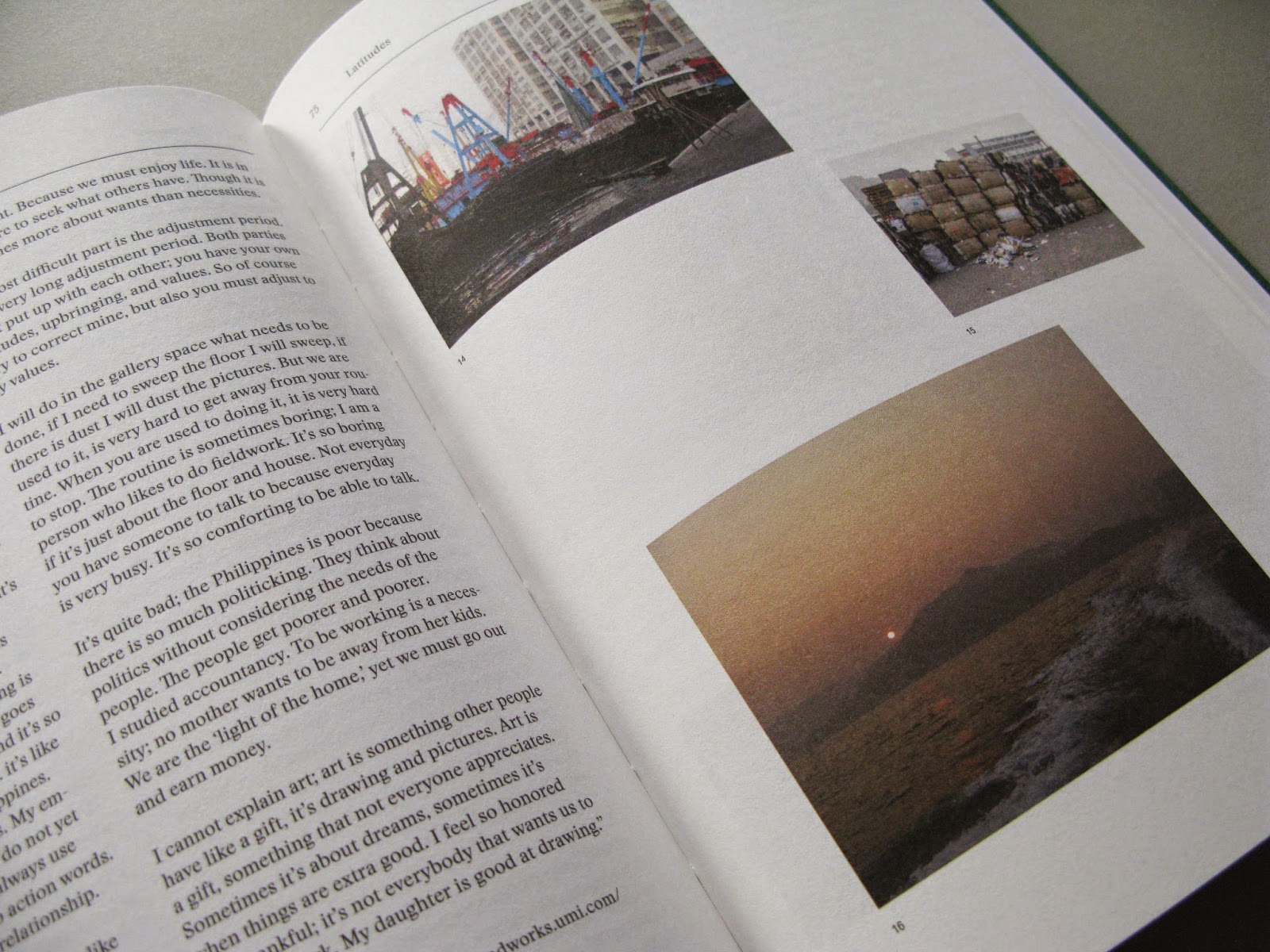 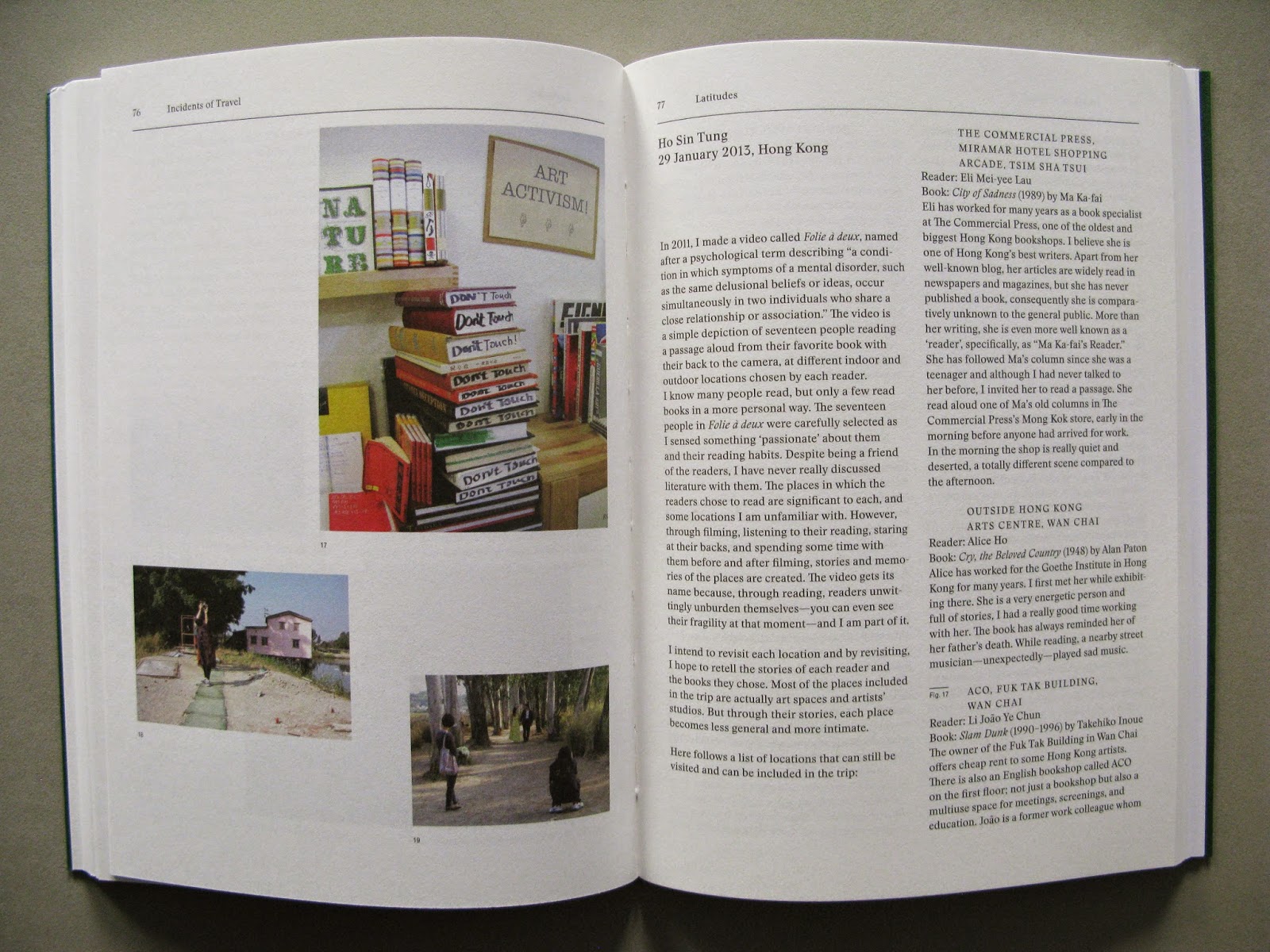 Itinerary and photo-documentation of Ho Sin Tung's tour on 29 January 2013. 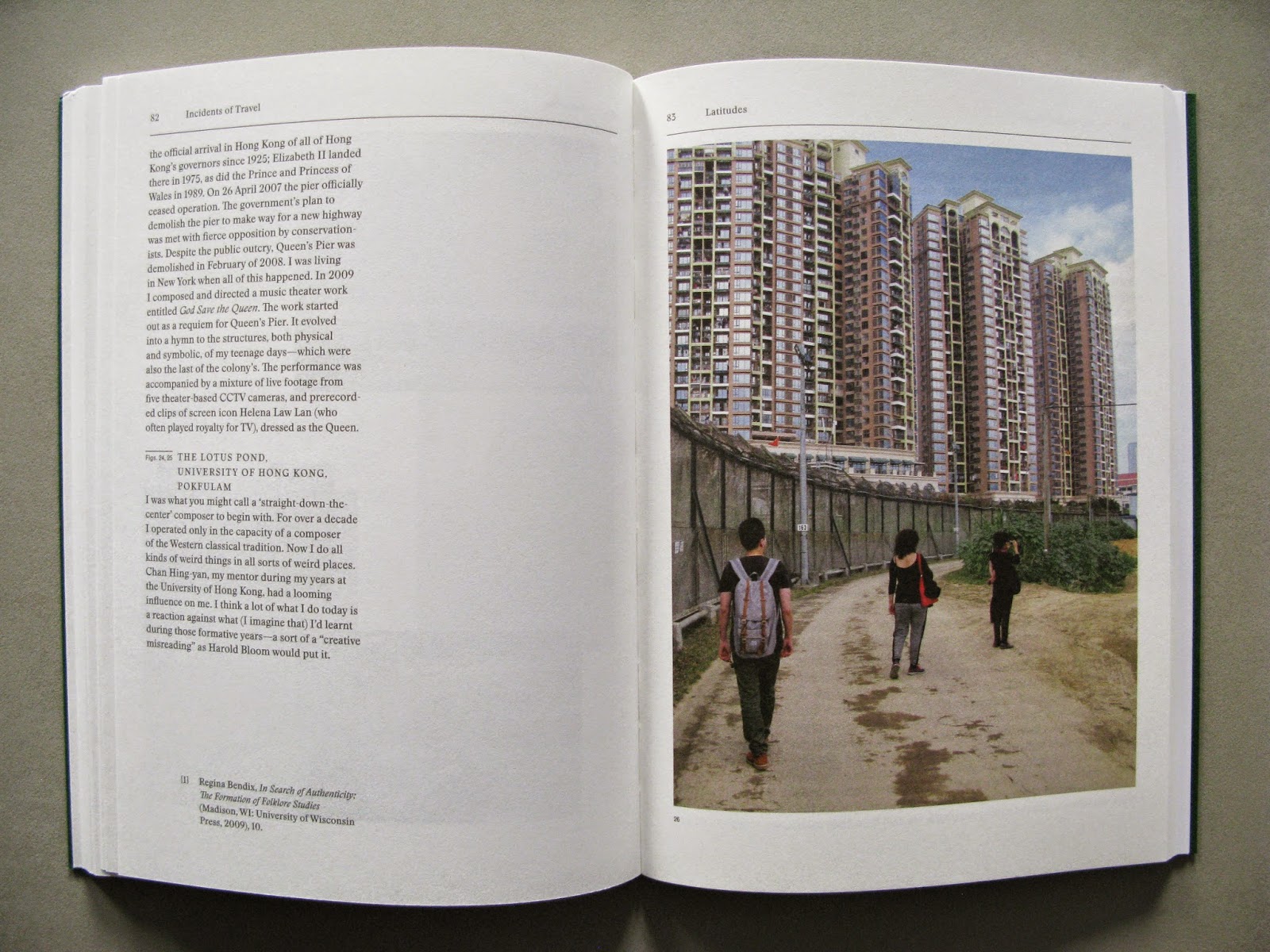 (Above and below) Itinerary and photo-documentation of Samson Young's tour, 7 February 2013. 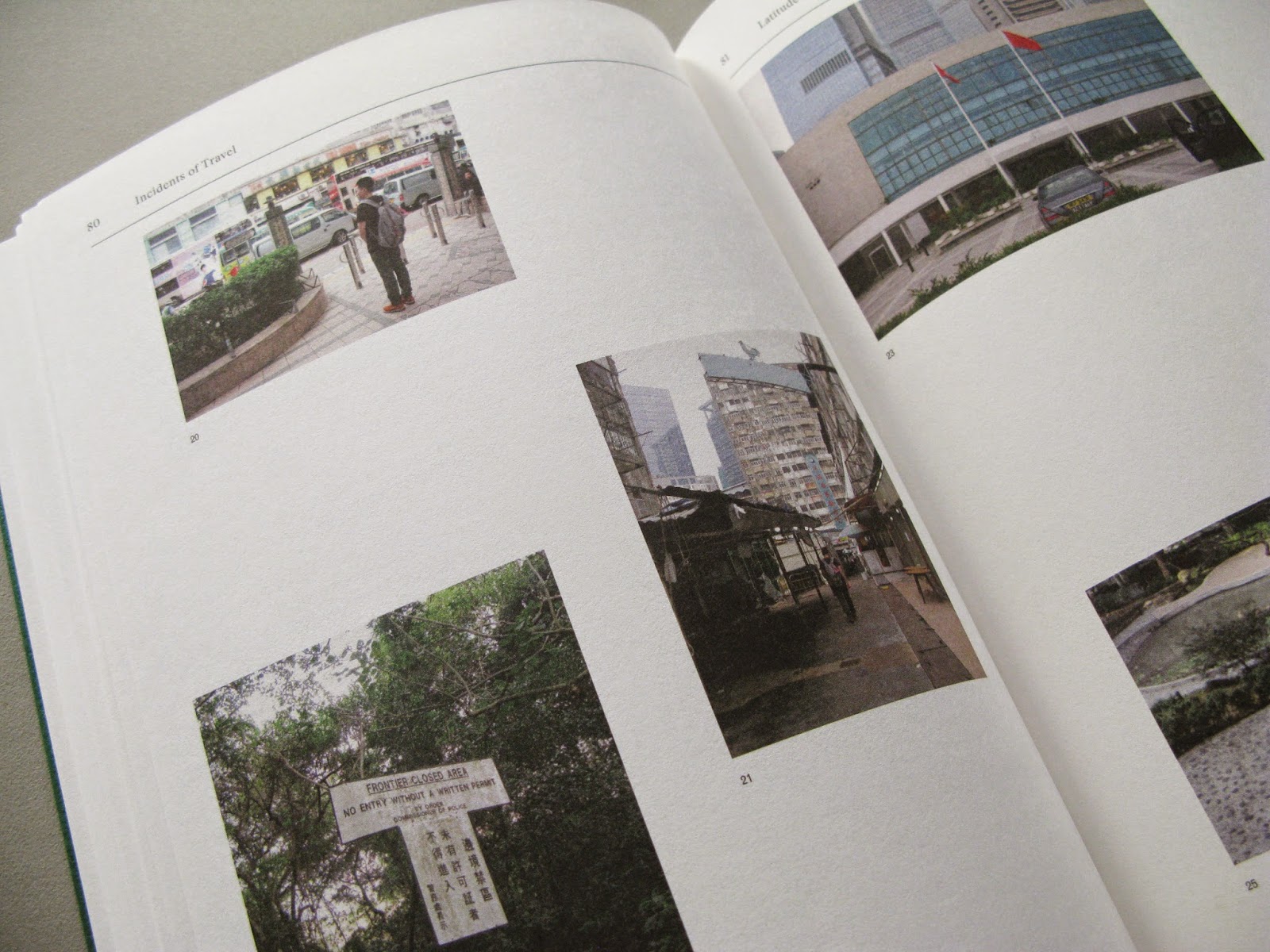 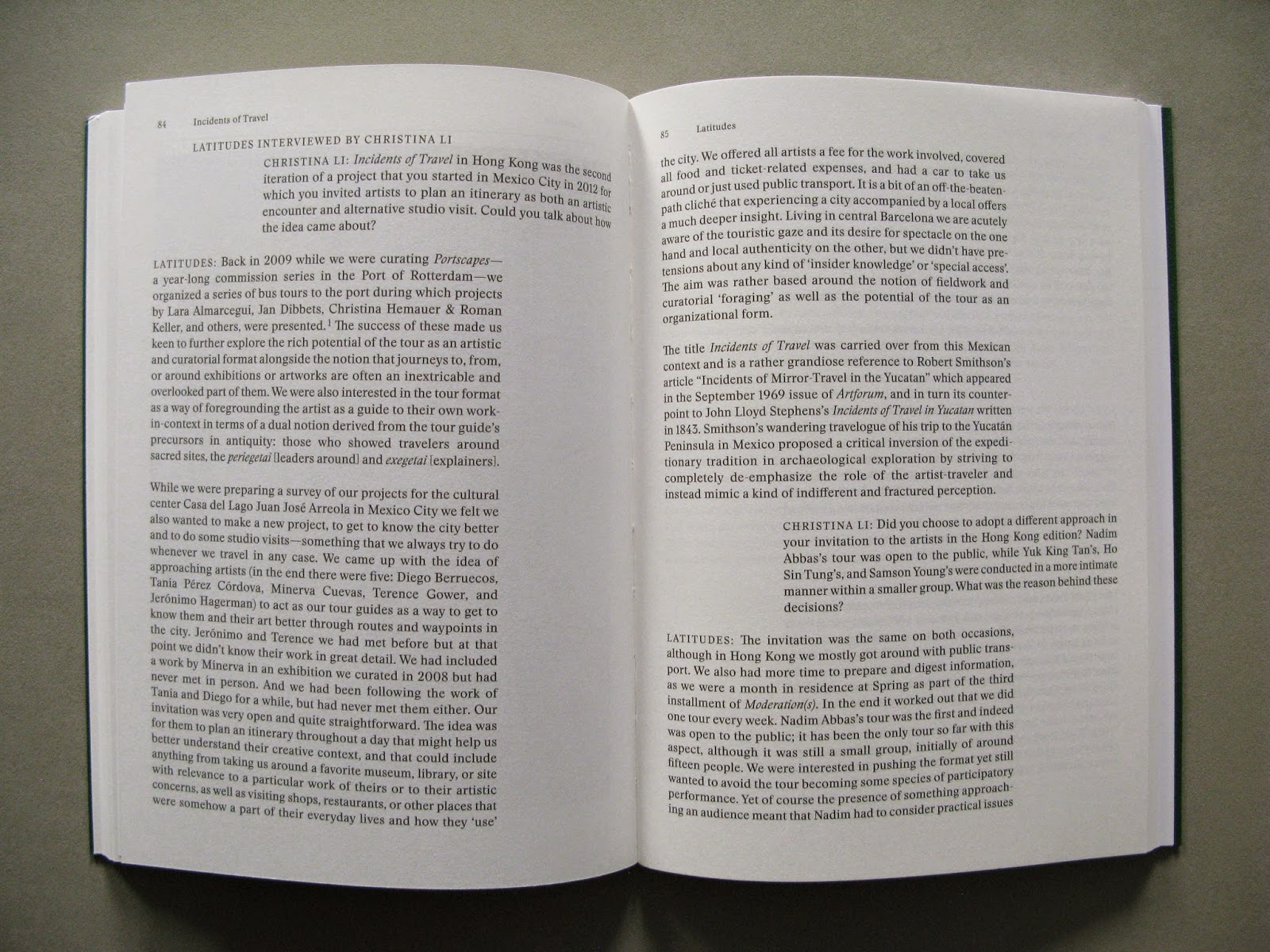 Christina Li: The artists' tours were meant for you both to converse privately with each selected artist while getting to know their practices and the city. Did the public aspect of the Nadim Abbas' tour and your experience of the commercial tours suggest a different perspective of how the format could function from your initial perception? How has this attempt challenged your thinking in mediating and presenting the immediate experience and documentation of these tours to a larger audience?

Latitudes: Although the commercial tours were taking place regularly by prior arrangement, we happened to be the only participants on each of the days [Feng Shui tour and Tour of the Devil's Peak]. We tried to keep the artist tours casual and inconspicuous and to respect the notion of hospitality and privacy in the same way that if we came to your house for dinner, you would not expect us to bring a group of strangers with us. In fact, the day with Yuk King Tan concluded with a household of Filipina domestic workers making food for us – women whose trust and friendship she had earned through her personal affiliations and the concerns of her art. In this case, it would obviously have been completely inappropriate and something of a human safari to bring along an audience. 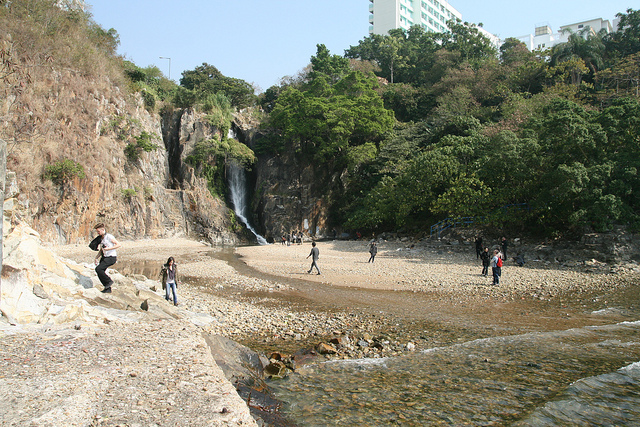 Visiting Waterfall Bay with Nadim Abbas was part of the public tour on 19 January 2013. Photo: Trevor Yeung.
But we had no desire to make the days exclusive or private as if they were some kind of bespoke tourist service. Other people sometimes joined for parts of the days if the artist had suggested it, yet the main point of emphasis was our commitment to the tour in lieu of the typically brief studio visit and a situation in which the artist has had ownership of planning the whole day. If there would be definitely something like an audience present throughout (that might expect to be engaged or come and go) the dynamics and the logistics would have changed.

The artist tours were conceived from the point of view of research, and we have been reluctant to burden the artists or overload the format to the degree that they become durational artworks or somehow theatrical. We are not particularly focused on tidying up whatever their ontological status as art might be and likewise, we have deliberately not just invited artists whose work has a clear sympathy with performative, urban research or an obvious relation with sociability or place.  We feel it is important that the format is quite malleable to the personality of each artist and that in the same way that you might browse a newspaper or share a car journey with somebody, the tours do not require a wider audience to legitimize them. In the same sense, they have not necessarily required documentation to make them valid. However, we have been increasingly interested in the idea of reportage or live broadcast in terms of the ‘making of’ or ‘artist at work’ genre, while at the same time being really wary about our own positions as protagonists and photographs that might seem like they belong in a travel magazine.

The tours in Mexico City took place for five consecutive days right after our arrival, so the way we shared the photographic material was more direct via our Facebook page at the end of each day. The exhibition at Casa del Lago opened only two days after we concluded the last tour, so we had to come up with a straightforward display form. For each tour, the photographer Eunice Adorno accompanied us and in the end, we projected a selection of 200 of her images as a slideshow and displayed a few of them printed on the wall alongside a large map of the city with pins locating the sites we visited. We also had printed itineraries, written by the artists, so anyone could later follow the routes themselves if they so desired. 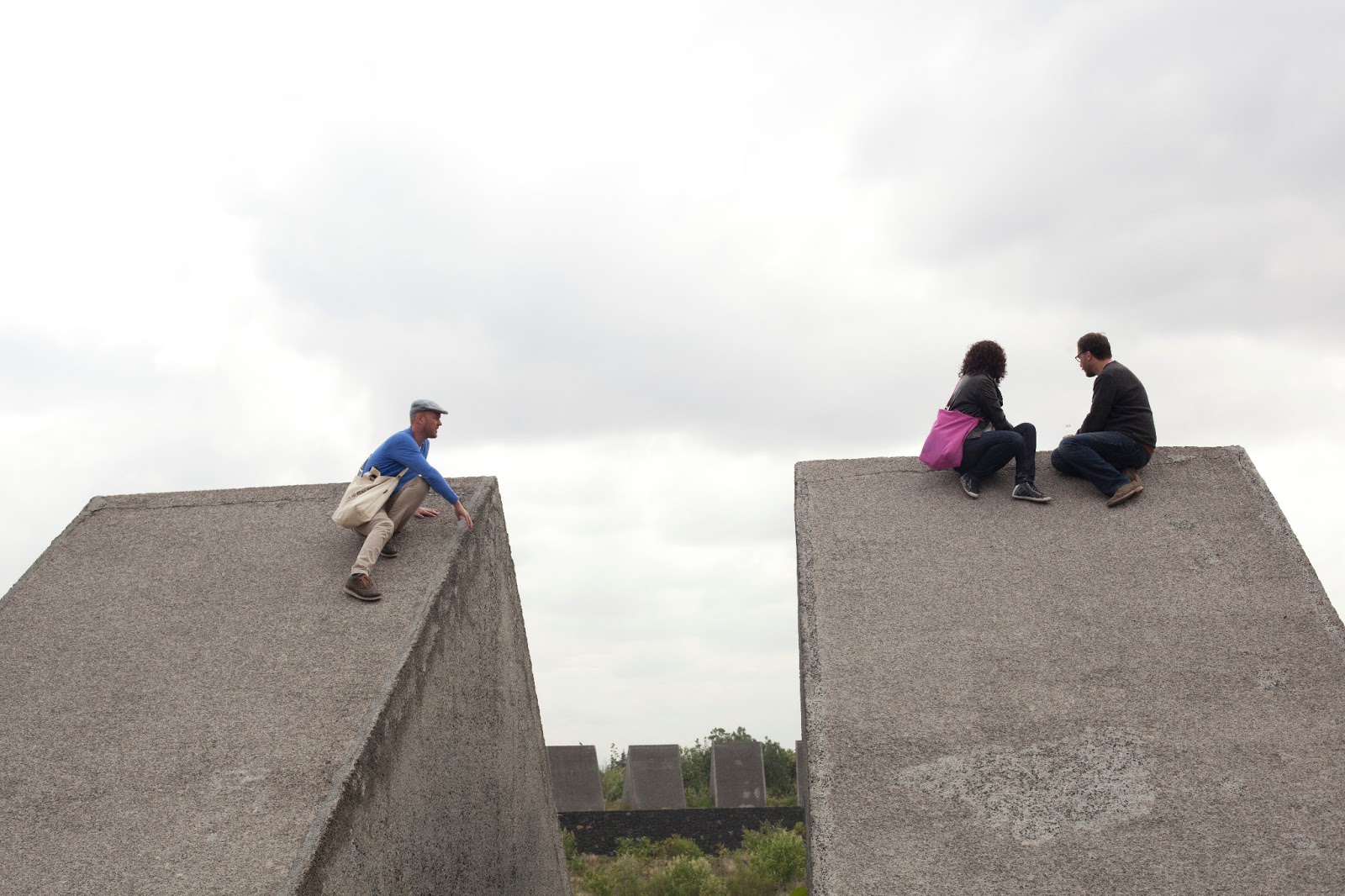 Visiting the Espacio Escultórico at U.N.A.M. with Jerónimo Hagerman, one of the five tours around Mexico City in September 2012. Photo: Eunice Adorno.
In Hong Kong we were using Twitter, Instagram, and Vine during the tours, so it was an experiment in documentation-on-the-fly and live journaling which was open to real-time responses. We also made a series of one-minute field recordings. The tweets were archived soon after alongside these recordings, as well as related Facebook posts. We also published blog posts about each of the tours which included many photographs (by us and others) alongside paragraphs from the artists’ itineraries. This might seem to highlight merely mundane technical aspects of the project but it also heightened our interest in further exploring the idea of the curatorial bandwidth beyond exhibition making, something we continued to investigate in following projects such as #OpenCurating.

Archive of social media posts related to "Incidents of Travel" tours and photo-documentation.

–
This is the blog of the independent curatorial office Latitudes. Follow us on Facebook and @LTTDS.
All photos: Latitudes | www.lttds.org (except when noted otherwise in the photo caption).
Licensed under a Creative Commons Attribution-NonCommercial-NoDerivs 3.0 Unported License.
2013, 2015, Christina Li, editorial, Heman Chong, Hong Kong, Incidents of Travel, interview, latitudes, Moderations, Publication, residency, Spring Workshop, Witte de With