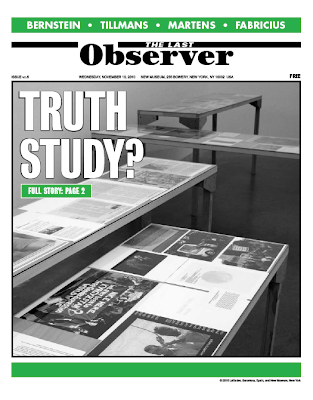 Issue 6: 'The Last Observer'
(READ IT ON ISSUU)

Cover: 'Truth Study?', Wolfgang Tillmans' 'Truth Study Center (NY)', 2010
Feature: London correspondent Lorena Muñoz-Alonso meets Wolfgang Tillmans whose table top installation 'Truth Study Center' is featured in 'The Last Newspaper'
Focus: Greg Barton & Collin Munn pay a visit to Judith Bernstein, who presents 'The Last Newspaper' visitors with two works from 1967
Picture Agent - Our singular picture agency: Renzo Martens
Media Habits: City-as-School Students
Feature: Curator and writer Manuel Segade – who opened his Facebook account four years ago and now has 872 friends– comments on the profile of the 'click self'
Feature: Art Historian and curator Lars Bang Larsen went to high school with Jacob Fabricius, the fellow Dane behind the non-profit free newspaper 'Old News', featured in 'The Last Newspaper'
Feature: Editorial Curatorial. ‘The Last Post’, ‘The Last Gazette’, ‘The Last Register’, ‘The Last Star-Ledger’, ‘The Last Monitor’ and now ‘The Last Observer’ have set out in part to address the role of the curator versus the role of the editor. Our Cluj-Napoca correspondent Marcel Janco takes up the story.
The Next Newspaper: Patch. Andrew Losowsky interviews Warren Webster, company president
Focus: Irina Chernyakova on the 'Perpetual Peace Project’ of ‘The Last Newspaper’ partner organization the Slought Foundation.
Fit to Print: Adam Chadwick attempts to get in touch with 'The Huffington Post' founder for his documentary film about the news industry.
100 years Ago…: 'The News-Herald' (Hillsboro, Highland Co., Ohio) 1886-1973 (changed title to 'The Hillsboro Press-Gazette' (1973-1985), November 10, 1910.
Cartoon: ‘The Woods: Backcover’ by Francesc Ruiz
‘Advertising Department’: Ester Partegàs 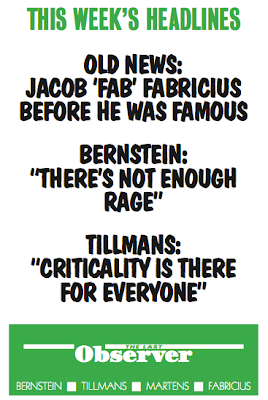 IS THIS TRUE OR NOT? 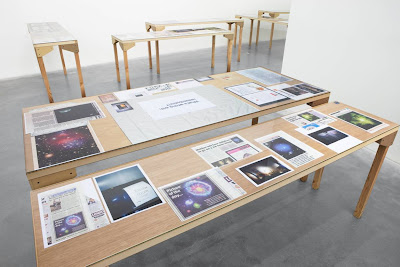 Installation view of Wolfgang Tillmans’, Truth Study Center (NY), 2010.
Wood, glass, and mixed media. Courtesy the artist and Andrea Rosen Gallery,
© Wolfgang Tillmans. Photo: Benoit Pailley. Courtesy New Museum.
A door buzzer is activated on a busy street of East London on a rainy Saturday evening; I push and find myself in Between Bridges, the non-profit gallery space Wolfgang Tillmans opened in 2006 to show artists that “are overlooked in the London scene”. (The current exhibition is by Gerd Arntz, a fairly unknown German artist and activist of the Weimar era.) I climb the spiral staircase to the studio and Tillmans welcomes me upstairs and offers me tea. He is tired but talkative, having just returned from Nottingham, where he has been installing his works for the British Art Show 7. His studio is a huge open space, full of desks and wooden tables, where newspapers and magazines pile under the neon lights. “Last year at the Venice Biennale I had four table works. And I had a whole room table installation (Space, Food, Religion, 2010) at the Serpentine Gallery show. But having The Last Newspaper and the Nottingham show opening in the space of three weeks has reactivated the Truth Study center project in a very significant way”, he says while pointing to the build-up of world-wide printed media that towers on every surface of the studio.

Lorena Muñoz-Alonso: What is or are the origins of your Truth Study Center works?

Wolfgang Tillmans: The project started in 2005 with a show in London at Maureen Paley which coincided with the publication of my third book for Taschen, also titled Truth Study center. It was a contradiction, somehow, because the contents of the book had nothing to do with the tables. That first show included sixteen tables. Then, in 2006, I had a big mid-career survey in the U.S., a show that toured between Chicago, Los Angeles and Mexico City which included a twenty-four-table installation. In 2007 I had a show at the Kestner-Gesellschaft in Hannover where I showed thirty tables, which then become part of the exhibition at the Hamburger Bahnhof in Berlin. So there have been two very big installations so far. The U.S. installation was altered from city to city; I was adding and adapting the contents depending on the context.

LM-A: So the way you can work on the tables is quite quick and reactive?

WT: Yes, pretty much. The tour was a year and a half long, and they were heady times in the American political arena, so it was interesting being able to incorporate all that to the work. There was a particular piece that was then published in The Guardian called ‘Ten easy steps for a fascist America’ by Naomi Wolf – a very heavy statement indeed. It was very striking and beautifully illustrated, so I made a table incorporating that on the spot. That table piece is again in The Last Newspaper exhibition. Americans don’t really like foreigners to criticise them. They are good at self-criticism, but the moment it’s a foreigner who does it, they can get defensive. But Wolf is American, so that couldn’t be accused of coming from European prejudices. 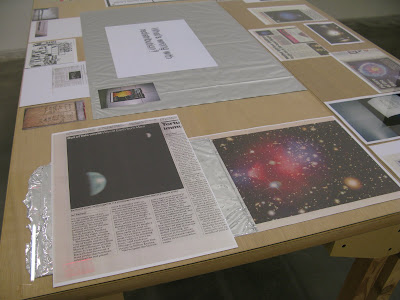 Detail of Truth Study Center (NY), 2010. Wood, glass, and mixed media.
Courtesy the artist and Andrea Rosen Gallery, © Wolfgang Tillmans. Photo: Latitudes
LM-A: How did you begin the process of incorporating the table as a new element in the vocabulary of your practice?

WT: It actually started in 1995 with a show at Portikus in Frankfurt where I used five flat cabinets to show images I had published in magazines. Also in the Turner Prize show in 2000 I used the same idea of laying out elements on a flat horizontal surface, so it was already settling within my practice then. While I was editing the Truth Study center book I came to this really obvious realisation that all my work happens on a table. A table provides a space for a loose arrangement, where things are laid out in a certain way, but can be easily rearranged. On a wall, you have to pin or tape the stuff, but a table is more fluid. There is clarity and complete contingency at the same time.

LM-A: And why did you start using newspapers as a raw material in your work?

WT: I had worked with found newspapers before, in the ‘Soldiers’ series (1999). I have to confess I am a bit of a newspaper junkie and have collected them since childhood. I often think that a day’s newspaper contains the essence of the whole world. But I guess that around 2002–2004, the years post 9/11, a clearer picture of the world we live in emerged – all the insanity that surrounded us – after what had seemed like the less politically charged 1990s. I was enraged and concerned and spending a lot of time reading media and thinking about all these different claims to the truth, ‘the big truth’ which was the ultimate justification behind all that violence and those wars. I realised that all the problems that the world faces right now arise from men claiming to possess absolute truths. 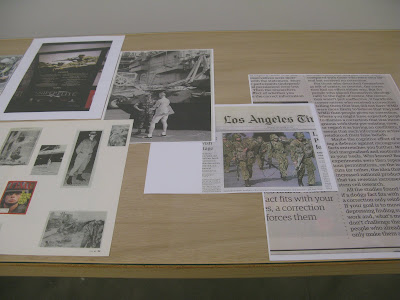 LM-A: So hence the name…

WT: Of course it would be very desirable to have a completely neutral ‘Truth Study center’, but that will never be possible. So even though it has this big title, it is not claiming to be delivering truth, but rather looking at all these different, opposed truths. But it is not at all saying that everything is relative or subjective. I do think there are certain truths that are not negotiable, that some events and attitudes are wrong, and I am straightforward about in the work, which I think is precisely what makes it interesting. It takes a moral stand on the one hand, but on the other is always aware of its absurdity and of its extreme limitations. So it presents all these issues, like the impact of AIDS denial in Africa or the question of the existence or not of weapons of mass destruction in Iraq – the whole war came about from a single question: is this true or not?

LM-A: Are the tables fixed in their arrangements and subjects?

WT: The tables are, or can be, pieces in their own right. They do not always have to come in the same installations. But it’s the same as with a wall installation when I think a grouping really works, I try to maintain it. But the working process is quite flexible and not set in stone.

LM-A: So you color–photocopy all the newspaper that are on the tables, which is already a process of translation in itself…

WT: Very much so. That is the essential part of the visual composition because we have been talking a lot about content but of course, if the table works were not interesting to look at, they wouldn’t have an artistic justification. I use the color photocopy because of aesthetic reasons, but also because the color copy is amazingly permanent, as opposed to the newspaper. I couldn’t use the original newspaper cause it wouldn’t look good after a year. But media-wise there are also real things, like a lottery ticket, a bus ticket, a vegetable wrapper… 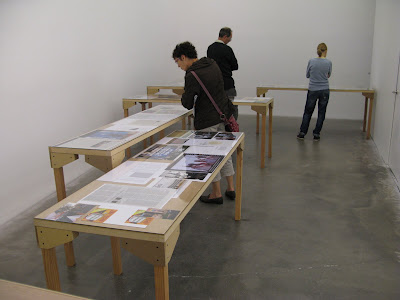 Installation view of the Truth Study Center (NY), 2010. Wood, glass, and mixed media.
Courtesy the artist and Andrea Rosen Gallery, © Wolfgang Tillmans. Photo: Latitudes
LM-A: You have a very strong relationship to printed matter. You have even said: “Everything I do happens on paper”, which I think is a simple but very meaningful realisation, with a lot of implications...

WT: I have a double interest in The Last Newspaper show. Not only do I use newspapers and magazines as material, but also my work is heavily featured in printed media and I use media as both generator and distributor of my work.

LM-A: What are the main subjects of your tables are in The Last Newspaper?

WT: There is one table about soldiers and war, one about religion, another about the depiction of war, games and violence on the internet. I also have some images of airlines and the experience of flying and there is one about Americans’ attitudes to food. There are a lot of critical messages there, but you could find all of them in very mainstream publications. Information and criticality is there for everyone, which is also one of the issues I want to highlight in this work.

LM-A: Is this series your outlet for political expression?

WT: There is definitely a bit of that. I use these works to make statements on subjects that I feel very strongly about but that I can’t or don’t want to tackle in my photographs. At the same time, though, the reason why I started to work with images from the very beginning was that I wanted to be involved with what was going on the world. Questions of taste or of beauty have always been politically charged for me. Do you find two men kissing disgusting or beautiful? That is a question of aesthetics but also of politics. I’ve always had this very strong awareness that every freedom that I enjoy as a gay person has been hard fought for by many people before me, and that gave me a great sense of public responsibility. I think every person counts. I might be very traditional in that sense, but I really think it does matter.
latitudes, New Museum, New York, The Last Newspaper