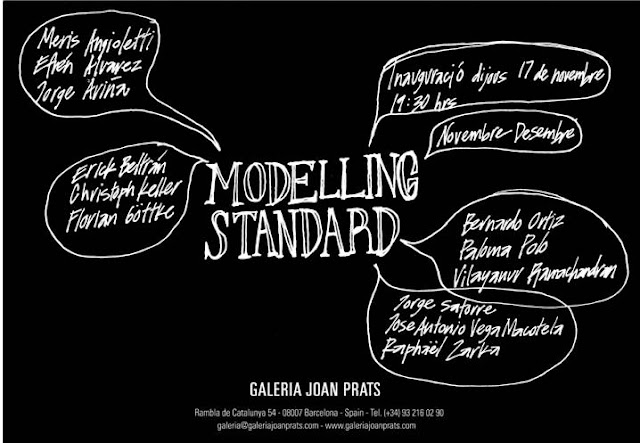 "Modelling Standard takes as a point of departure the radical historiographic turn introduced by Carlo Ginzburg in the 1970s who focused on localised, popular and disregarded micro-histories rather than universal, over-arching versions. The title Modelling Standard references the scientific concept of the Standard Model used in physics to explain the almost invisible interactions occurring between subatomic particles.
Erick Beltrán and Jorge Satorre use both micro-historical methods and the metaphor borrowed from physics to create connections between small, insignificant hints and traces. These are taken from their heterogeneous references to build seemingly unlikely connections between literary references, personal experiences, historical data, trivia and scientific facts through the construction of a diagram. The result is a series of caricatures and texts through which the artists will construct a detective plot where Sigmund Freud, Carlo Ginzburg, Giovanni Morelli, Aby Warburg, Sir Arthur Conan Doyle, Joe Orton are the protagonists." (taken from FormContent's press release)
In Casa Vecina, Modelling Standard expanded with the inclusion of a comic also with drawings by illustrator and project collaborator Jorge Aviña, which will also be presented in Galeria Joan Prats alongside, as the artists have stated, the "input from a number of artists, illustrators and guest researchers, whose personal research work adds new links to the chain that stretches and lengthens ... like the devil's drool". 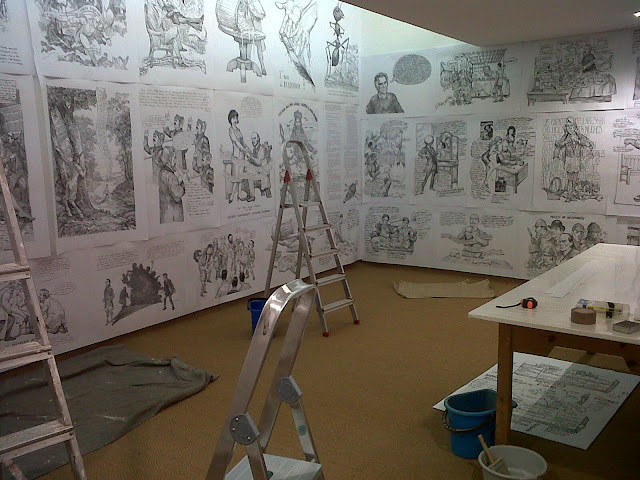 Installation process of the exhibition. Photo taken the day we began the interview for 'Atlántica' magazine.