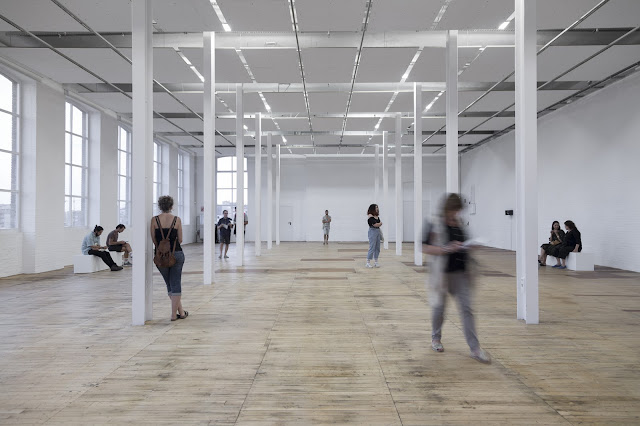 The third floor of the Centre d'Art Contemporani de Barcelona - Fabra i Coats. Photo: Eva Carasol.
On September 27, 2018, a live programme of performances will begin as part of the exhibition survey by Joan Morey ‘COLLAPSE. Desiring Machine, Working Machine’ at the Centre d'Art Contemporani de Barcelona - Fabra i Coats.
‘POSTMORTEM. Pour en finir avec le jugement de dieu’ (2006-2007) will be the first of six the reenactments that will take place on the third floor of the exhibition.
Each of the six performances is extracted from their original context as studies or scenes from earlier projects and given an independent life. These live-action fragments encompass ritualistic exercises following the artist’s rules, tableaux vivants, and dramatic orations based on texts by the artist or by playwrights such as Samuel Beckett. Whenever possible the performances maintain their original interpreters, yet inevitably they are reinforced or degraded through their repetition, adding another layer to the artist’s exploration of control.
Access to all performances is unrestricted. 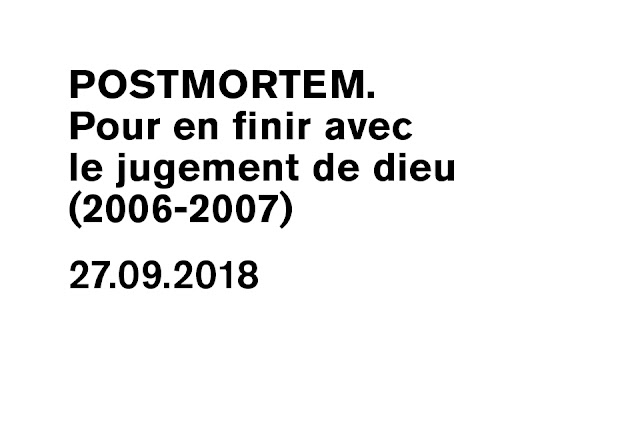 An extract from panel 7 of POSTMORTEM. A solo female performer wears a loudspeaker which plays excerpts from "To have done with the judgment of God" (1947) by Antonin Artaud, a radio play which here also serves as a form of a choreographic score. Made inert as an individual by the skin-tight garment that covers her entire body, the performer becomes a crawling and indeterminate body-thing that emits vocal expressions. She is literally burdened by a device that only amplifies Artaud’s constant evocation of the voice as a kind of excrement and his palpable obsession with the misery of existence.

‘COLLAPSE. Desiring Machine, Working Machine’ is the first chapter of a three-part project curated by Latitudes. The second part of COLLAPSE will take place at the Centre d’Art Tecla Sala, L’Hospitalet de Llobregat from November 23, 2018 (on view until January 13, 2019). Titled ‘Schizophrenic Machine’, the third comprises a major new performance event which will take place on January 10, 2019, at an especially resonant – yet, for the moment, deliberately undisclosed – location in Barcelona.