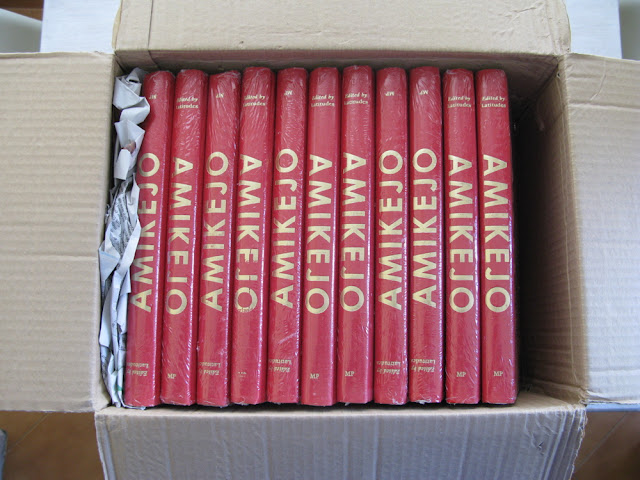 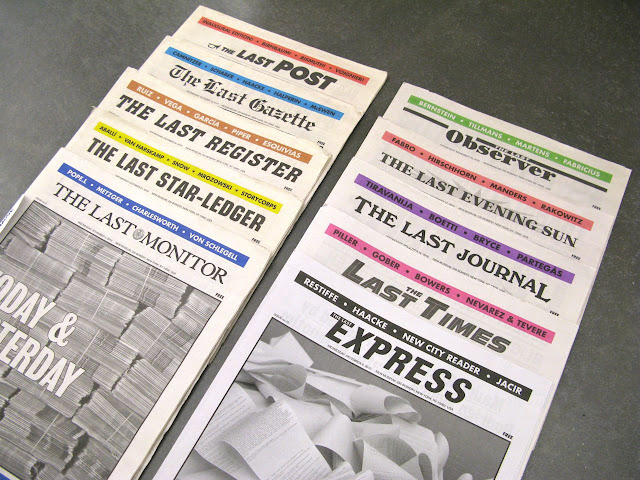 Mariana Cánepa Luna of Latitudes will discuss the role of the curator in the context of three of Latitudes' recent projects. These case studies trace Latitudes' approach in an editorial context (The Last Newspaper, New Museum, New York (2010)); a year-long exhibition series ('Amikejo', MUSAC, León (2011)) and as an invited organisation (the two editions of No Soul for Sale: A Festival of Independents in X Initiative, New York (2009) and Tate Modern (2010)).

This cycle of monthly conferences centres on different professions within contemporary art, discussing aspects that characterise the practice of a cultural producer, a critic, a curator, a researcher and a member of an independent art space. + info... 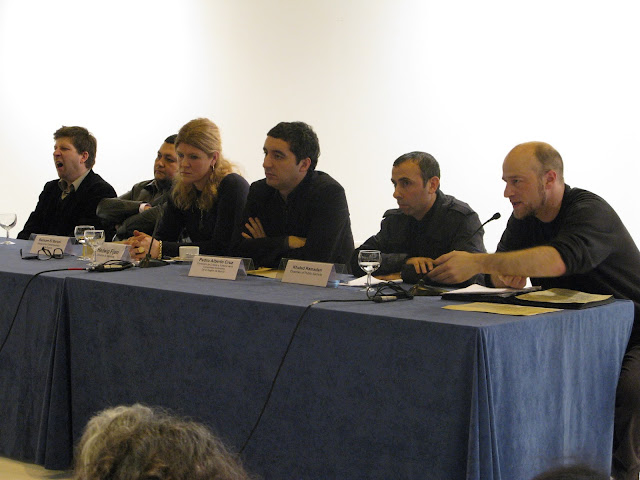 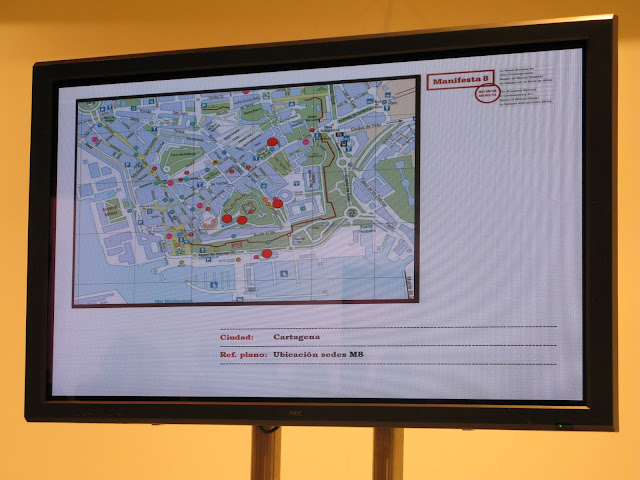 Slideshow with map of the venues in Murcia and Cartagena. Photos: Latitudes 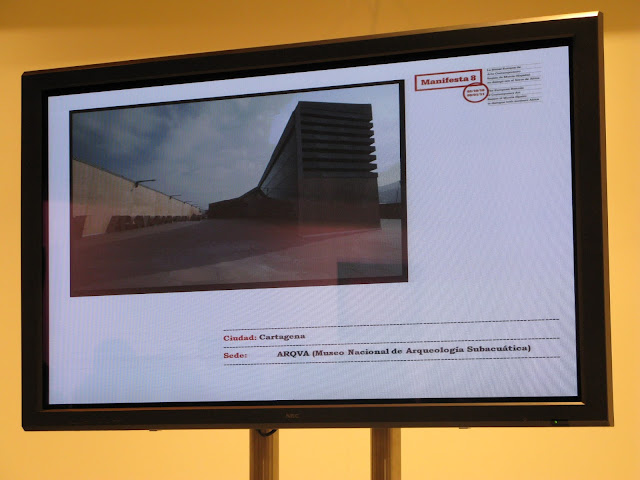 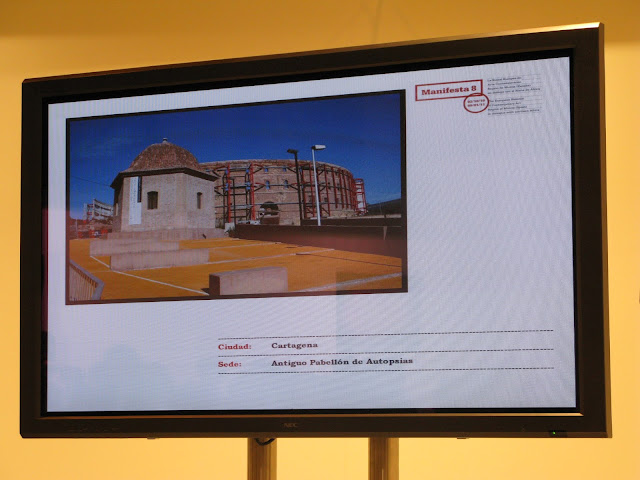 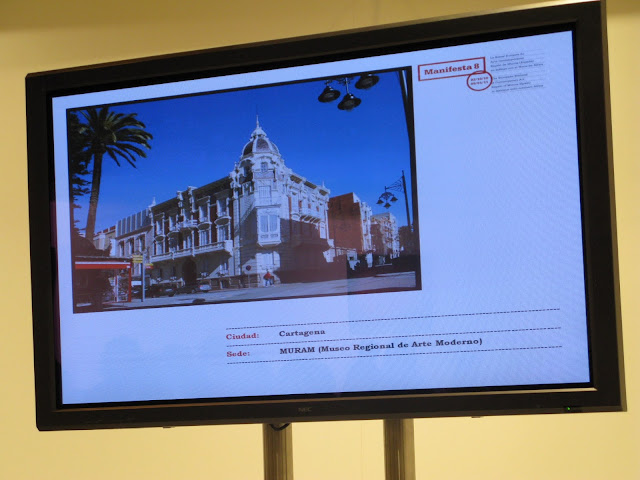 MURAM (Museo Regional del Arte Moderno), Cartagena.
In addition, emblematic spaces like the Pavilion 2 of the Artillery Barracks (Murcia), the Former Post and Telegraphs Office (Murcia) or the panoramic restaurant El Parque (Cartagena) are being recovered for the public and re-opened after years in disuse. 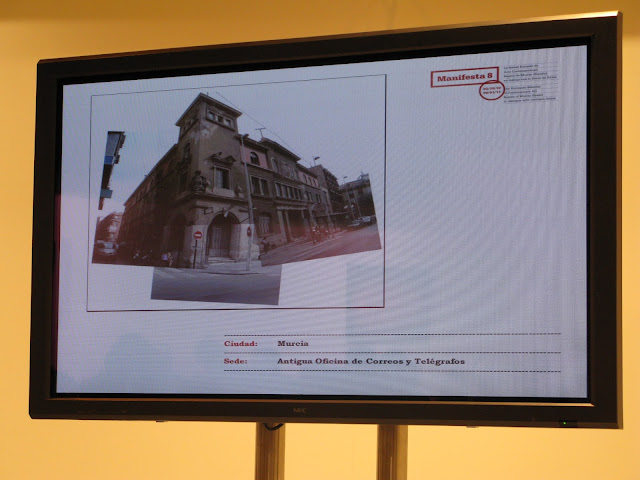 Former Post and Telegraphs Office (Murcia).
Manifesta 8 will take place from October 2, 2010 through January 9, 2011.
www.manifesta.org
www.manifesta8.es
The hosting city/region for Manifesta 9 (2012) has recently been announced: Limburg, the eastern most province of Flanders, Belgium. The organising venue is the art center Z33 directed by Jan Boelen. In words of the commissioner 'repositioning oneself in a post-industrial society and the pursuit of attaching new meaning to our industrial heritage are issues which are present all over Europe and hold the interest of the Manifesta. With its impressive buildings on the mine sites at Waterschei and Beringen, and the production halls of the former Philips factory in Hasselt Limburg has also favourable sites to house expositions.'
See images of the presentation.
2010, 2012, biennale, Hasselt, Limburg, Manifesta, Murcia, Spain, Z33

As announced during ARCO last February (see press release at the bottom of our 27 November 2008 post) "Manifesta 8 will explore the idea of Europe in the 21st century at the edges of the continent. More specifically, the aim of Manifesta 8 will be to engage with Europe’s present-day boundaries with Northern Africa and its interrelations with the Maghreb region."

Following Manifesta's invitation to "existing curatorial groups, artistic and interdisciplinary collectives and/or existing institutions to be part of the Curatorial Team of Manifesta 8" they have announced the appointment of the Alexandria Contemporary Arts Forum, Chamber of Public Secrets and Tranzit.org as the curatorial collectives in charge of Manifesta 8, which will open 1 October 2010 during 100 days in Murcia and Cartagena, in the south-east of Spain.

Following are their CV's taken from e-flux, 4 September 2009. Hopefully this and further information will soon be uploaded on the (ancient) Manifesta website:

Alexandria Contemporary Arts Forum (ACAF), founded in Alexandria (Egypt) in December 2005, focuses on contemporary art, new media and discursive practice, cultivating a deeper awareness of art in relation to all aspects of contemporary life and culture. Central to its mission is an ongoing engagement with projects that bring together established and emerging artists, university students, and diverse practitioners, in contexts that recognize the value of an informal, non-hierarchical, open-ended circulation of information and experience. The ACAF is in a constant state of flux and incorporates innovative activities, guided by its socio-cultural compass.

Chamber of Public Secrets (CPS), based in Copenhagen (Denmark) and the Middle East, works as a network of artists, curators and thinkers who have been collaborating since 2004 in the organization, production and circulation of film and video festivals, art exhibitions, TV and radio programs, political fictions and documentaries. CPS also develops forums for debate and publishes books and articles about socio-political and cultural issues such as migration, mobility, representation, colonialism, gender and difference. CPS wishes to stimulate the role of debate, while reconstructing the role of art, its responsibility and its relation to society.

tranzit.org is a network of autonomous art associations, existing since 2002 in Austria, Czech Republic, Hungary, Slovakia, who cooperate working across borders - between nations, languages and histories. Each tranzit group operates independently from each other, using different formats and methods - such as discursive platforms, exhibitions, publications and research initiatives - but always aiming to generate a deep involvement in the local artistic and intellectual context. At the same time each tranzit group carries out a re-assessment of contemporary history, challenging the canons, geography and master-narratives of post-war European (art) histories. The aim of tranzit is to act trans-locally, in constant dialogue with cultural narratives on a local and global scale.

Thu, Nov 27 2008
Hot on the heels of Manifesta 7 which took place throughout the Trentino-South Tyrol region of northern Italy this summer and autumn, the applications for host city for the 8th edition of this European Biennial of Contemporary Art - Manifesta 8 would take place in 2010 - closed a little more than a month ago. According to the Polish newspaper Gazeta, the contenders in what increasingly feels like an Olympics-style bid, are ... Gdansk, Poland; Riga, Latvia and Murcia in Spain. The same paper reports that the Polish bid was someway short of the 3.3 million Euro price tag.
In contrast, the southern Spanish city of Murcia, doubtless keen to shake off its image of golf resorts and vegetable growing, is seemingly very flush with money for contemporary art. Rather improbably, the city already has something of a track record for bringing home major projects and attracting some big names. And as many in the arts seem to be cutting budgets in credit crunch times -- not least the State-funder SEACEX who recently announced a 22% cut in its provision for Spanish artists abroad -- Murcia seems to be spending and investing in contemporary art more than ever.
Earlier this year the city staged Estratos, (see posts from 03.02.08 and 28.05.08) a twenty-artist project curated by Nicolas Bourriaud, the first 'PAC' (Proyecto de Arte Contemporáneo) a biennial-like format alongside residencies and exchanges supported by the Region of Murcia. Anish Kapoor's 'Islamic Mirror' curated by Rosa Martinez, continues at the Santa Clara Convent until January 2009 (organised by Culture and Tourism Department of the Region), and in May the SOS 4.8 Festival, with curators including Rirkrit Tiravanija was also funded by the Region. With the debacle of Manifesta 6 and the dispersed and difficult to navigate recent edition, what is clearly going to be a well-financed bid from an ambitious Murcia (with the 2nd 'PAC' already in place for 2010, and doubtless supported again by the communications skills of Urroz Proyectos), will surely take a lot of beating. And rumours are already beginning to circulate that a decision has already been made. We'll find out shortly before Christmas.
––
UPDATE:
The Region of Murcia's selected "en diálogo con África del Norte" as the host of Manifesta 8. There will be a presentation on the 11 February, at 14h at their Stand de la Región de Murcia in ARCO, Madrid. See e-flux announcement (11/02/09)
[Image: http://flights.jet2.com/Murcia/weather.htm]
2009, biennale, Estratos, gentrification, Manifesta, Murcia, SEACEX