A report from the symposium 'How Institutions Think' organised by the LUMA Foundation and CCS Bard College, Arles, 24–27 February 2016 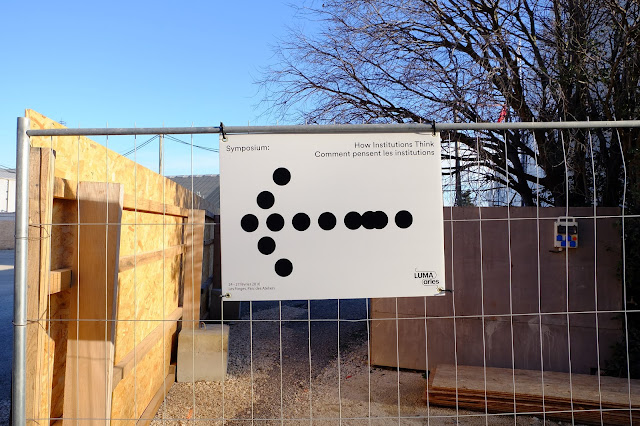 All photographs: Latitudes.
[The following text was originally published on Frieze Blog on 9 March 2016].

Co-presented by the Center for Curatorial Studies, Bard College with the LUMA Foundation, the four-day symposium ‘How Institutions Think’ [pdf of the programme] met to reconsider the habits and rhetorics of contemporary art institutions and curatorial practice. The event, held at the Parc des Ateliers, Arles, from 24–27 February, was developed in partnership with a long list of collaborators (Valand Academy of Arts, Gothenburg, Sweden; Afterall Books and the Exhibition Histories programme at Saint Martins, London, UK; Goldsmiths, London; the V-A-C Foundation, Moscow; and de Appel art centre, Amsterdam).

Taking its title from the 1986 book by British anthropologist Mary Douglas, the symposium played out on the site of the future LUMA Arles, a 20-acre former railway yard that includes a new building designed by Frank Gehry scheduled to open in summer 2018 as exhibitions spaces, archives, residency and study facilities, as well as a restaurant, hotel and park. Introduced by CCS Bard’s Paul O’Neill and LUMA founder Maja Hoffmann, the presentations were hosted in the recently-restored L’Atelier des Forges spaces in the middle of this construction site. O’Neill took the work-in-progress status outside as an invitation for the more than 30 speakers and around 150 delegates to debate not only what the future of art institutions in general might be, but more immediately, how new ways of operating could underpin this nascent institution in the south of France. 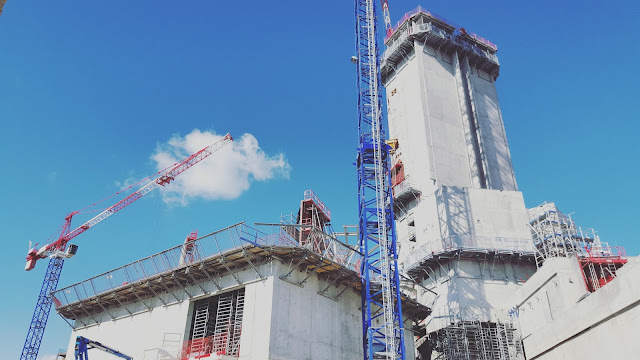 LUMA Arles is located in the former railway yards of Arles and includes a new building designed by Frank Gehry and the renovation of the industrial buildings on the Parc des Ateliers by Selldorf Architects.
Yet what transpired was something far more pervasive. An amplification of the noun ‘institution’ and the verb ‘instituting’ soon engulfed not only a discussion of art and academic establishments, but law, governance, and the psyche of the French state, post-November 2015 Paris attacks. The grim predicament of a Europe in the depths of the refugee crisis – as the symposium took place, at the other end of the country, Calais’s ‘Jungle’ camp was being dismantled – became the lens for considering nothing less than the spectral institution that is Western European colonial imperialism. In the first evening’s fragmented keynote by Zahia Rahmani, the writer and historian gave an account of the ‘Made in Algeria’ exhibition of colonial cartography she has curated for the MuCEM museum in Marseilles. She argued that we cannot plausibly think about the future of any institution without confronting the terrible failures and opprobrious injustices of the past, most glaringly what she characterised as the ‘toxicity’ of Western Europe’s colonial system. 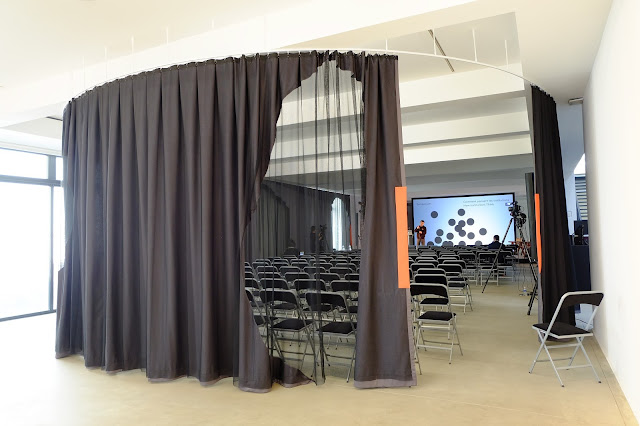 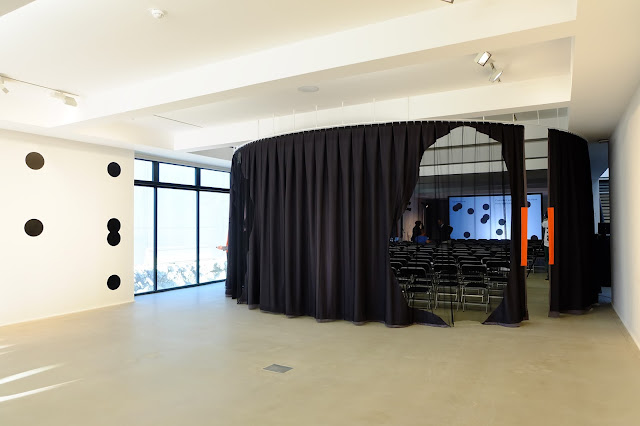 Céline Condorelli's 'All our tomorrows' (2015) hanging curtain.
‘Is institution building still desirable?’ wondered artist Céline Condorelli in her presentation the following day as she evoked All our tomorrows (2015), her installation that humbly corralled the symposium’s setting, comprised a large hanging curtain inspired by the ‘poor architecture’ of Lina Bo Bardi’s SESC Pompéia, the social and cultural centre established in São Paulo.

Reflecting on his own transformative experiences made while directing the 2014 edition of the São Paulo Biennial, Charles Esche – Director of the Van Abbemuseum in Eindhoven, Netherlands – astutely articulated both the decisiveness of Western Imperialism’s poisonous effect on the rest of the world, and the nervousness about whether anyone can even venture to be hopeful about the future. Esche persuasively argued that Western museums must make decolonialisation fundamental to their missions and no longer a marginal issue by analysing the entrails of neoliberalism’s ‘dogged persistence’ and, soothsayer-like, intuitively sensing the ‘weak signals’ of a more just politics. 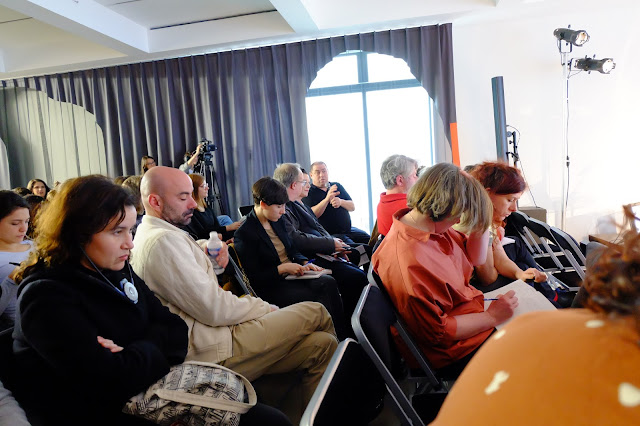 Question from Mick Wilson, artist, educator and Head of the Valand Academy of Arts, University of Gothernburg, Sweden, and moderatior of one of the sessions. 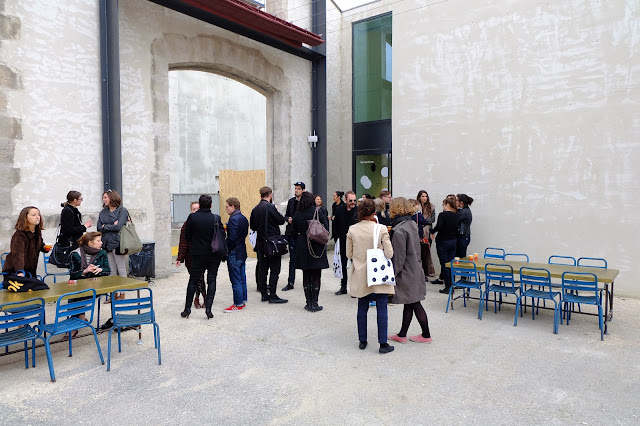 Attendees gather outside the symposium venue at the Parc des Ateliers.
Sociologists Luc Boltanski and Arnaud Esquerre spoke of France’s deep investment in what they termed the ‘economy of enrichment’ in observations that were particularly prickly given the art-destination place-making unfolding on the very site of the symposium. They submitted that the luxury brands that dominate the image of the country abroad enjoy a close but officially-unacknowledged complicity with heritage and culture. They argue that this compound myth of the French art de vivre accounts for the country consistently being the globe’s most visited tourist destination, yet also that, less innocuously, France’s defiance of normative economic rules about price and value make it both a haven for inequality as well as unusually susceptible to instability. Put candidly, the presence of refugee and terrorists is not conducive to tourism and handbag sales. Later, speaking about ‘turbo-fascism’ and a transition to ‘necropolitics’ (a term coined by philosopher Achille Mbembe regarding the politics of sovereignty over life and death), philosopher Marina Gržinić contended that we are living in a time of war in which our institutions battle to preserve this ‘good life’ at any cost. 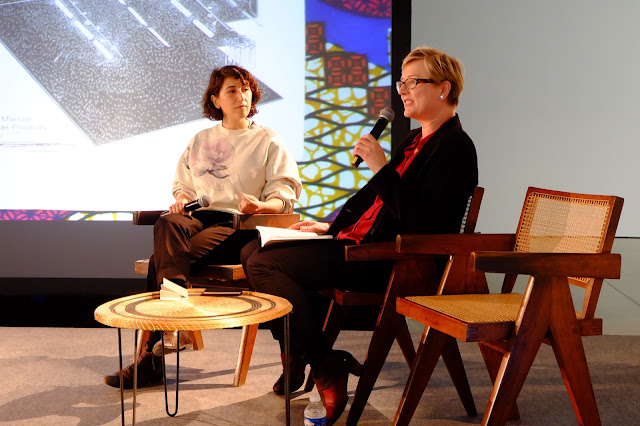 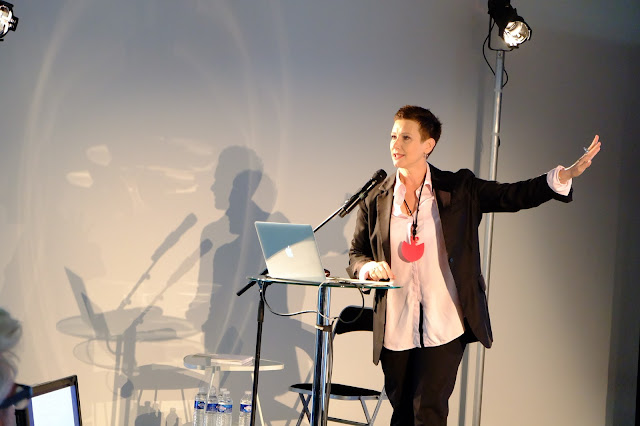 Clémentine Deliss, Independent Curator and Fellow of the Institute of Advanced Study (Wissenschaftskolleg).
Turning more specifically to art’s institutions, independent curator and editor Nataša Petrešin-Bachelez argued that they are so often so deeply implicated in an economy of precarity that they spawn new toothless art forms of ‘safe participation’ and ‘soft interactivity’. ‘Stubborn’ institutions thus appeared to be both the problem and the solution. Accordingly, Clémentine Deliss – recently dismissed as the Director of the Weltkulturen Museum in Frankfurt – delivered a scorching critique of the racism and intransigence persisting in ethnographic museums founded in the 19th century, particularly in Germany and France. She characterised how the hundreds of thousands of objects ‘salvaged’ from the frontline of the colonial project are now trapped in a legislative embargo, reduced to little more than dormant entries on databases. Access to these hoards of material culture and their restitution is critical she asserted, yet young curators are too afraid to deal with them – contemporary art offers an easier ride.

In the context her work directing the SBG Gallery in Montréal, Canada, curator Pip Day discussed Canada’s settler-colonialist legacy, the evasions allowed by conceiving of decolonization as merely a metaphor, and her advocacy of the work of First Nation artists such as Maria Hupfield. Bassam El Baroni, an independent curator based in Alexandria, Egypt, later presented a paper that threaded a bewilderingly dense route through a tangle of cognitive philosophy and ‘prometheanism’. Yet Day’s case studies, as well as those discussed by Mélaine Bouteloup, curator of Paris’s Bétonsalon, regarding the recently opened Villa Vassilieff which is now the second site of that institution, helped to link such abstraction to more practical curatorial and artistic thinking-in-action that addresses the past while creating new knowledge. 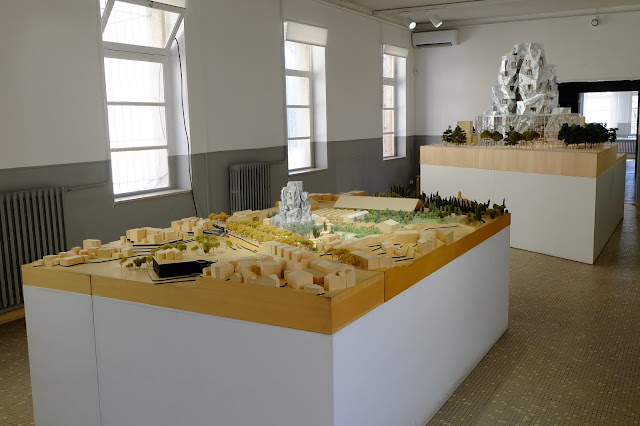 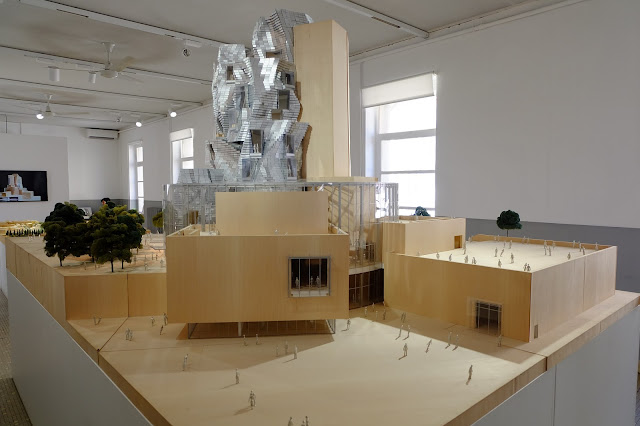 Gehry’s LUMA building will comprise presentation and exhibition spaces, archive, library, offices, seminar rooms, artist-in-residence facilities, café-restaurant and hotel and is due to open in summer 2018.
Yet it was through the presentations by writer Dave Beech and especially architect Keller Easterling that the symposium actually approached something resembling a strategy to address what had been almost uniformly painted as the shameful, broken state of the contemporary institution. According to both Beech and Easterling, we should be paying keener attention to infrastructure rather than institution per se. Following her book Extrastatecraft: The Power of Infrastructure Space (2014) Easterling’s bruising and exhilarating contention was that an enveloping urban medium (including preposterous towers, mall sprawl, special-trade-zone legal lacunae) defies consideration as a thing and is better thought of as a global operating system, a ‘disposition’ that thrives on saying one thing and doing quite another. 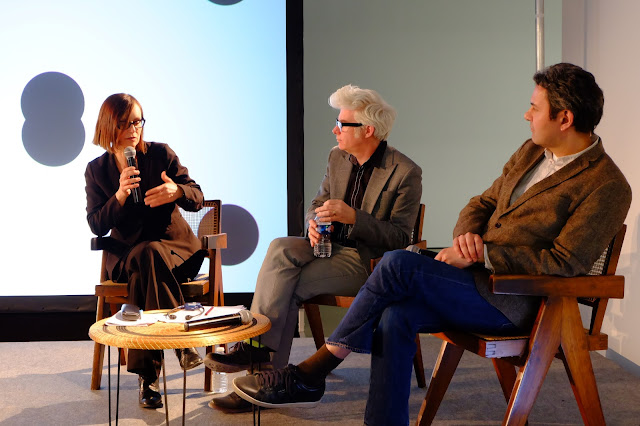 Ljublijanan philosopher, theoretician and artist Marina Gržinić; writer and professor Dave Beech and curator and theorist Simon Sheikh.
At the start of the symposium artist Liam Gillick – one of LUMA’s luminary consultants alongside Tom Eccles, Hans Ulrich Obrist, Philippe Parreno and Beatrix Ruf – had asked somewhat rhetorically, ‘can an institution be thought collectively on this scale?’ It was clearly not only Charles Esche who looked out at the spine of what will be a 24,000 square metre Frank Gehry-designed tower and noticed that the institution’s die was cast already – and thanks to an architect long synonymous with the art museum as an importunate form of trophy. Following Keller’s strategic spatial repertoire of ‘counterbalances’, ‘interplays’, ‘toggles’, ‘incentives’ and ‘ratchets’, as well as her talk of heeding the dynamics of joke-telling or dough-tending, she implied that if we are going to formulate a resilient future for art institutions, we had better start feeling our way – and get a whole lot more canny.

–
Max Andrews is a contributing editor of frieze and, with Mariana Cánepa Luna, runs Latitudes, an independent curatorial office based in Barcelona, Spain.
– 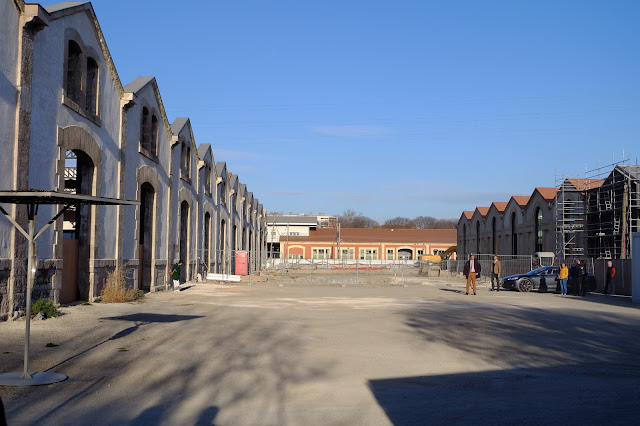