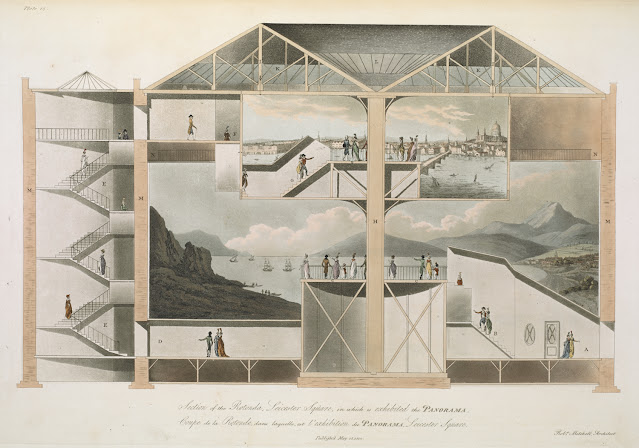 ↑ Robert Mitchell, “Plans, and Views in Perspective, with Descriptions of Buildings Erected in England and Scotland; and ... an Essay to Elucidate the Grecian, Roman and Gothic Architecture. (Plans, Descriptions Et Vues En Perspective, Etc.)”, 1801, London. Held at the British Library.

PRESS RELEASE
Museu d'Art Contemporani de Barcelona (MACBA)
Plaça dels Àngels 1
08001 Barcelona
www.macba.cat
“Panorama 21: Notes For An Eye Fire”
22 October 2021–27 February 2022
Opening: 21 October 2021
“Panorama 21: Notes For An Eye Fire” is a project that aims to reaffirm the commitment of the Museu d'Art Contemporani de Barcelona (MACBA) to the vitality of local production, by supporting site-specific creation and reconsidering what it can offer – and how it can be best used – through a new generation of artists and audiences. Conceived as a long-term commitment by the museum to support local practices, this is an initiative that aspires to make an enduring contribution to the resilience of Barcelona’s cultural ecosystem.
“Panorama 21: Notes For An Eye Fire”, which takes its title from the third book of poems by Gabriel Ventura (“Apunts per a un incendi dels ulls”, Documents Documenta, 2020), will be co-curated by Hiuwai Chu (Curator, MACBA) together with Latitudes, the curatorial duo formed in 2005 by Max Andrews and Mariana Cánepa Luna. This type of collaborative work aims to widen institutional practices and bring independent perspectives, through a scheme that it is hoped will be maintained in the future.
Occupying the entire second floor of MACBA’s Meier Building, it will consist of a group exhibition featuring a number of newly realised projects alongside recently produced works. Moreover, Hiuwai Chu and Latitudes conceive this inaugural edition as a curatorial, editorial and communication channel where in-venue displays encompass a wider spectrum of online programming, publishing, streaming and engagement with MACBA’s users beyond the Museum walls.
Borrowing from the practices of an increasingly socially engaged generation of artists, “Panorama 21: Notes For An Eye Fire” is not guided by a top-down thematic focus. Instead, it is growing in a cumulative and responsive way from a ground-up perspective on Barcelona, the region and its imaginary. It aspires to amplify the voices of artists and cultural producers that are working in unprecedentedly challenging times.
The project will draw from the panoramic notion of a wide view seen from a fixed point, as well as the innovation that was the origin of the word itself – a neologism coined by the Irish artist Robert Barker from the Greek pan (all), and horama (view) to describe his paintings of Edinburgh, Scotland, at the end of the eighteenth century. Long before the invention of cinema and the proliferation of screens that now characterise contemporary life for many of us, panoramas offered one of the most surprising and popular visual spectacles.
A panorama was an immersive combination of painting, theatre and architecture. A vast 360° depiction of a city, landscape or battle scene that was presented in a purpose-built circular building. Viewers entered through a tunnel and emerged onto a platform at the centre of the structure and into a startling wrap-around experience. Panoramas could offer a vicarious form of travel. The first such presentation opened to the public in London in 1791, yet the invention really took off in Europe during the following two decades when international travel was severely restricted due to the Napoleonic Wars. Barcelona’s 1888 Universal Exposition presented no less than three panoramas in the city, representing views of the fabled peaks of Montserrat, the Siege of Plevna and the Battle of Waterloo.
Resonating with the trans-disciplinarity of these display devices, and their desire to inform and captivate, “Panorama 21: Notes For An Eye Fire” nevertheless turns the page on their seamless vista of past conflicts and decisive victories, to imagine instead a structure for supporting a fertile and diverse landscape of many complex artistic positions of the present.
@macba_barcelona
#PanoramaMACBA
#macbaBCN
#apuntsperunindencidelsulls
→ RELATED CONTENT:
2021, 2022, Barcelona, exposición, Hiuwai Chu, latitudes, Latitudes-curated, MACBA, Panorama 21