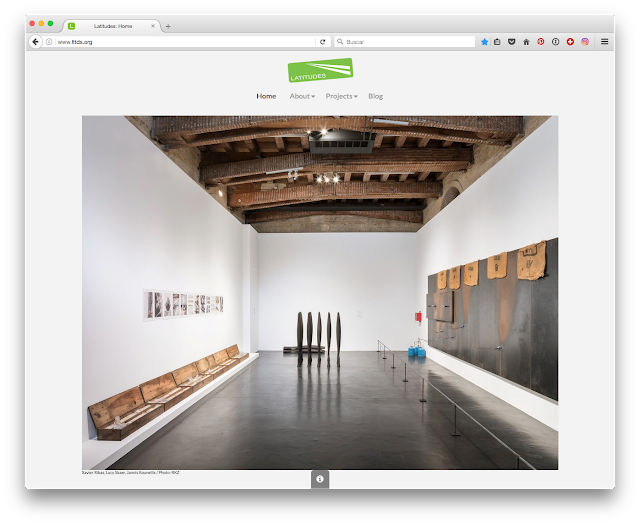 www.lttds.org
The July 2017 Monthly Cover Story "4.543 billion" is now up on www.lttds.org – after July it will be archived here.

"4.543 billion. The matter of matter recently opened at the CAPC musée d’art contemporain de Bordeaux, and features the work of more than thirty artists. Curated by Latitudes, the exhibition looks at histories of art as fragments in geological time. The portentous mood of this gallery hinges on combustion and history violently formed through the fundamental reordering of the relations between humans and the rest of nature." Continue reading

Report from Glasgow: Lecture at The Common Guild and studio and gallery visits

Wed, Dec 4 2013
Late last month we made a trip to Glasgow at the invitation of The Common Guild to give a lecture about the work of Roman Ondák, who currently has an exhibition there (until 14 December). We took the opportunity to stay a few days in Glasgow to see exhibitions and do some studio visits with the many artists who call the city home. A big thank you to Kitty Anderson and Katrina Brown for the invitation and hospitality.

In our lecture on the evening of 21 November we talked about some key works by Ondák – including SK Parking (2001) and The Stray Man (2006) – suggesting how fin-de-siècle Vienna provides a lens with which to focus on its negotiation of both the cliché of "life as art" and the grim stereotype of "the everyday" in the former Eastern Europe.

Ondák's show at The Common Guild filled the galleries of its present home in a Victorian townhouse near Kelvingrove Park with a series of works in vitrines which couple early still-life paintings and drawings by the Slovakian artist alongside the actual objects depicted. A chair, a length of rope, a twig, a vase, and so on, become caught in a humorous riddle about reality and its representation and when the "real" work of an artist can be said to have begun. 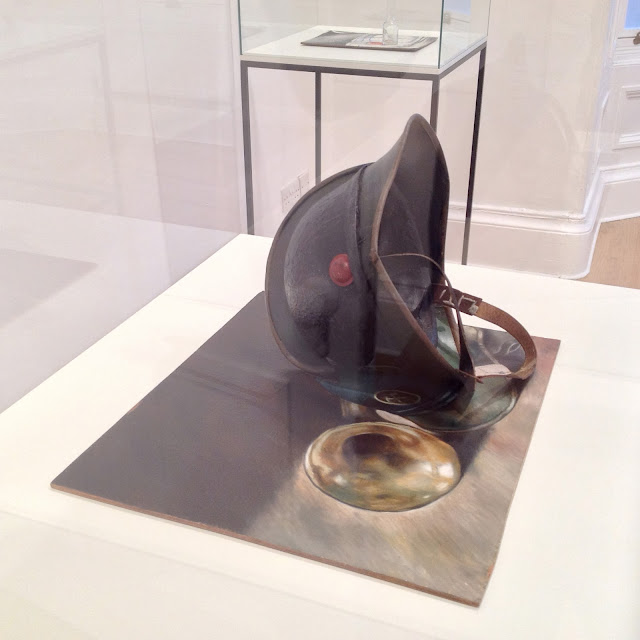 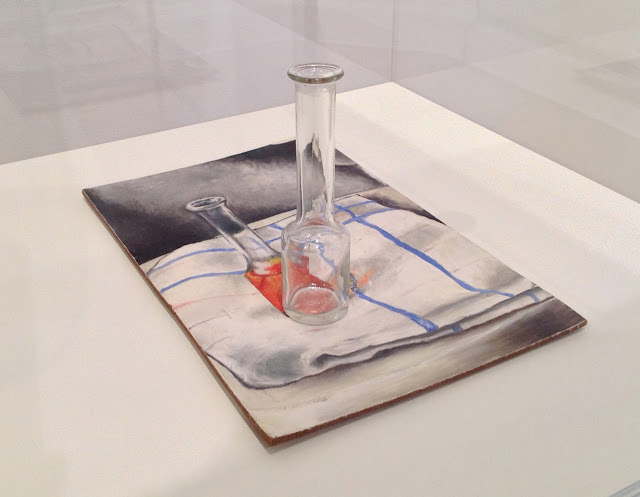 The previous day we'd visited the studio of the amazing filmmaker Luke Fowler, who was about to go to Huddersfield for their Contemporary Music festival and a collaboration with David Toop. We also met with Corin Sworn, who was one of the three artists representing Scotland at the 2013 Venice Biennial, though in fact none of them was actually Scottish. Scotland + Venice 2013 – whose final week was during our visit to Glasgow – was conceived and produced by The Common Guild. (We were also delighted to be able to meet the great filmmaker Duncan Campell, another of the Venice artists later in the week).

We'd also had time to check out the eclectic Hunterian Museum (the oldest museum in Scotland), Aaron Angell & Jack Bilbo's show at SWG3 Gallery, as well as The Modern Institute's two venues. At the Aird's Lane branch was a show by furniture designer Martino Gamper while the Osborne Street HQ, a former bathhouse, has a show by Chris Johanson.


In the south of the city, we were glad to be able to visit Tramway, the multi-use arts venue that's been running since the late 1980s and now also hosts the Scottish Ballet, as well as a huge exhibition space with an important history of shows. It hosted an impressive show by Lucy Skaer entitled "Exit, Voice and Loyalty", as well as a "House Style" a series of commissions made in response to Roundabout a series of film from the 1960s and 1970s designed to promote Britain as a progressive world leader to south and south-east Asian audiences.

Thanks to Kyla McDonald at Glasgow Sculpture Studios we visited their fantastic high-spec fabrication facilities – which include a ceramics studio, wood and metal-shop and media suites – and met with a number of artists based their. Claire Barclay had just completed a commission with Artlink commemorating the bicentenary of the Royal Edinburgh Hospital. We talked with Lauren Gault about her show at Generator Projects in Dundee, and Sarah Forrest about her recent Margaret Tait Residency in Orkney. Alex Impey told us about his interest in Michael Baxandall's "Period Eye" and Sarah Tripp had just finished edited 24 Stops, a work commissioned by Camden Arts Centre.

Moreover, Glasgow Sculpture Studios have an exhibition space which was hosting a show by Haegue Yang entitled Journal of Bouba/kiki, the result of a residency and Haegue's evident delight in exploring some new fabrication techniques.


Finally we were happy to spend time with Carles Congost, who by Catalan coincidence, opened an exhibition at CCA Glasgow on Friday 22 November. Curated by Emma Brasó with works by Congost and Henry Coombes, "Man of the Year" runs until 26 January next year.
–
This is the blog of the independent curatorial office Latitudes. You can also follow us on Facebook and Twitter.
All photos: Latitudes | www.lttds.org (except when noted otherwise in the photo caption)
This work is licensed under a Creative Commons Attribution-NonCommercial-NoDerivs 3.0 Unported License.
2013, Duncan Campbell, Glasgow, haegue yang, Lecture, Lucy Skaer, Roman Ondák, studio visit, studios facilities, The Common Guild

Thu, Jun 21 2012
'Sad Eis' (Sad Ice), Sarah Ortmeyer's first solo show in Meessen de Clercq (1 June–14 July 2012) is  "an exhibition on ritualized happiness" as described in the exhibition guide.
During the opening night, the artist treated guests to liquorice, fennel and wasabi ice cream as well as cocktails made of Riesling wine with lavender ice cream. 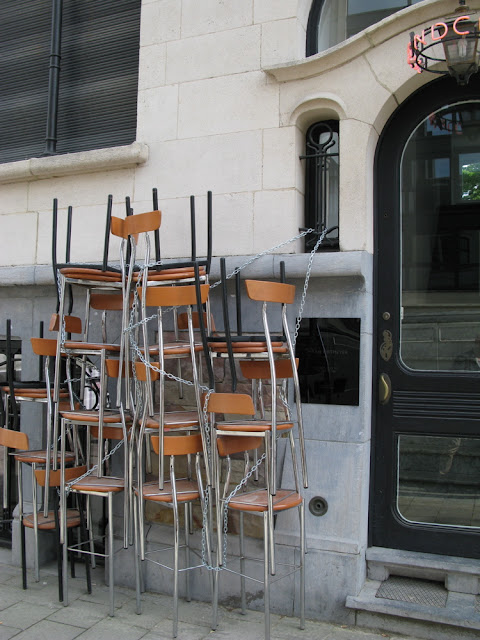 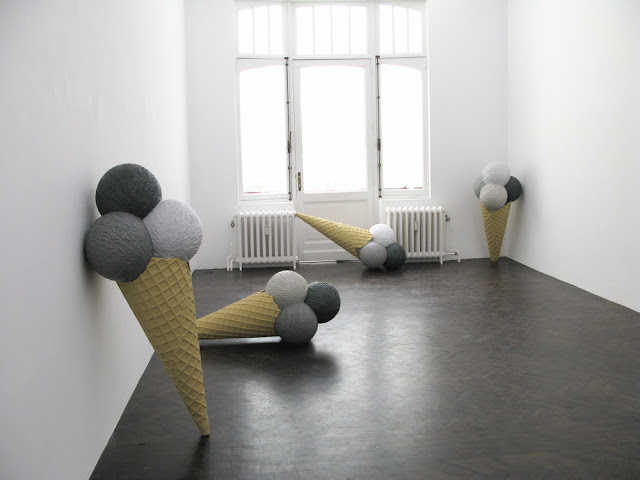 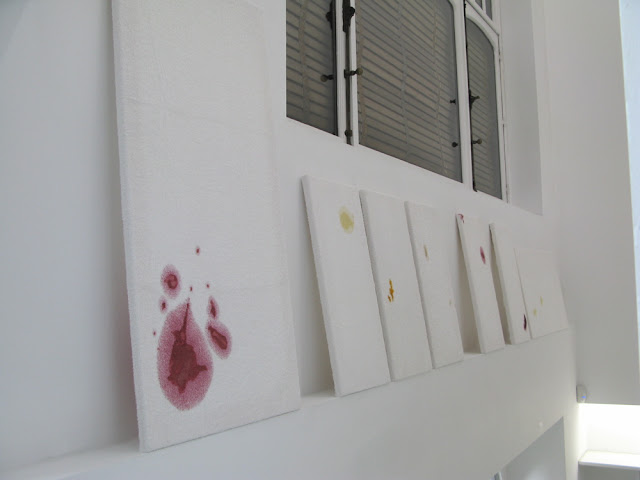 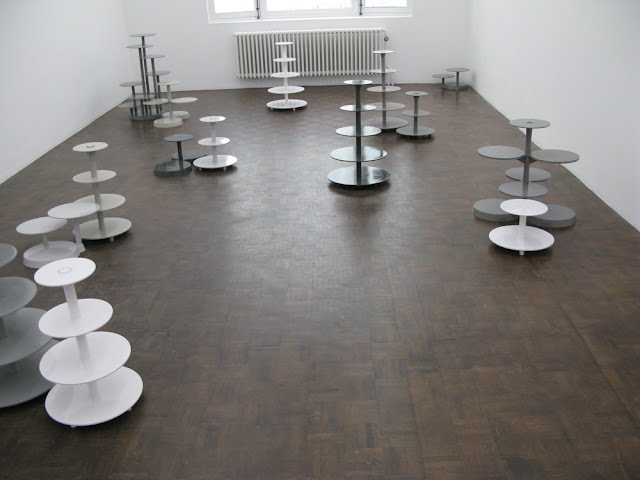 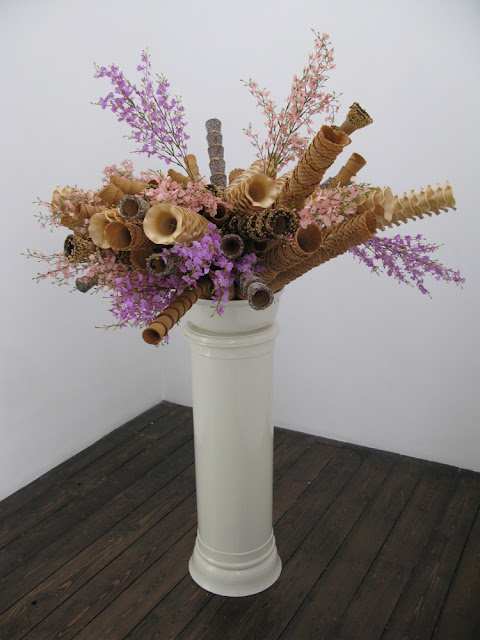 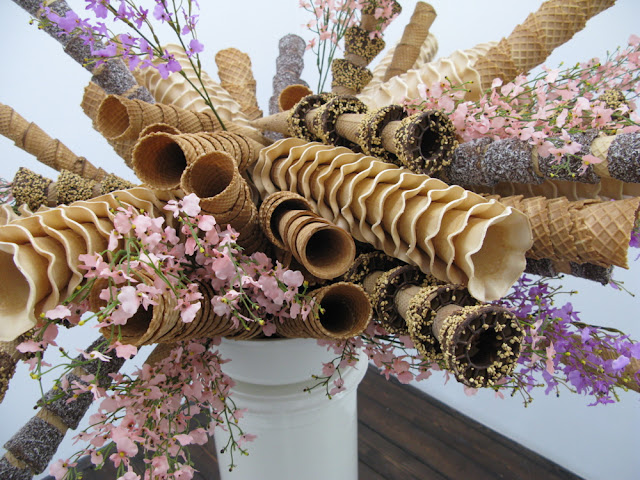 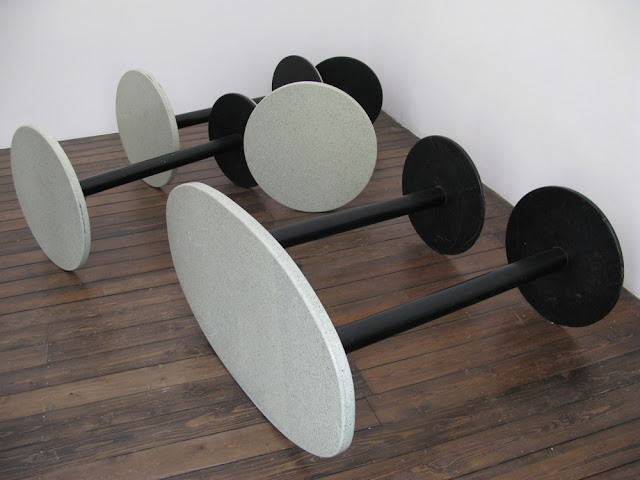 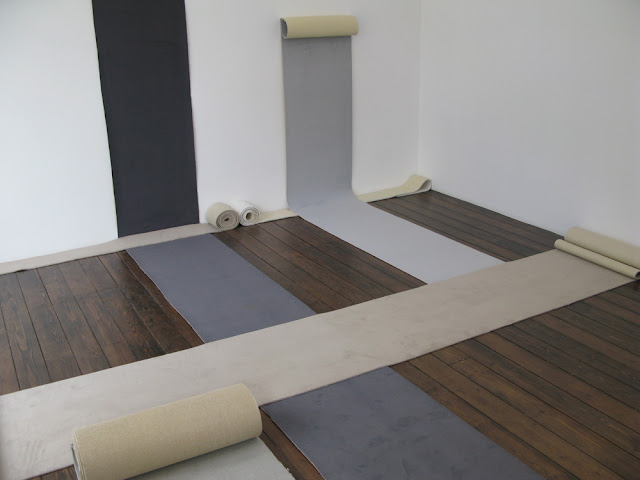 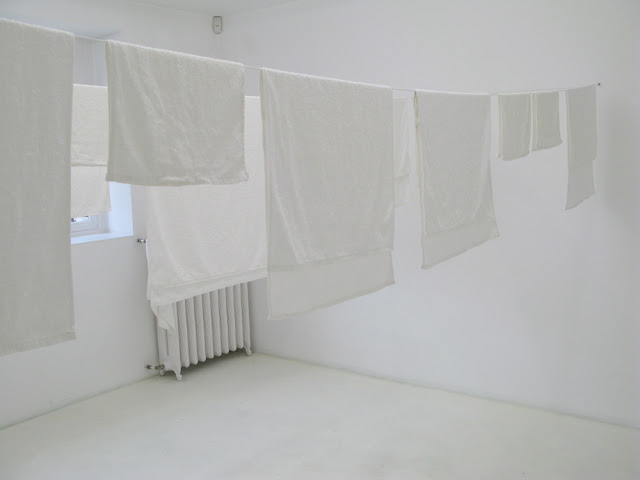 Lucy Skaer's solo show 'Force Justify (Part 2)' (24 May–16 June 2012) at Tulips & Roses:
[From the press sheet]
The ship of fools is an archetype based on the Narrenschiff by Sebastian Brandt, a medieval book in which a ship full of fools set sai to a fools utopia Narragonia.

Starting from a woodcut illustration from the book, I have made a work that inhabits and performs the allegory. (...) First the image was carved in to the floor of the K21 museum in Düsseldorf, and a large print was made from it. The floor was then lifted and moved, rearranged and reprinted in a scrambled form. The original ballast from the Düsseldorf ship was transformed from its shape as copies of Brancusi's Newborn sculptures to instead match the tile shapes from the floor of Tulips & Roses.

This "second part of 'Force Justify' the tile pattern was again replicated in a series of woven sails, rigged up in the space giving a thwarted ability to move forward. This absurdist sense of agency is typical of the project, a series of misuses of objects and ideas to make immediately appealing stop gaps." 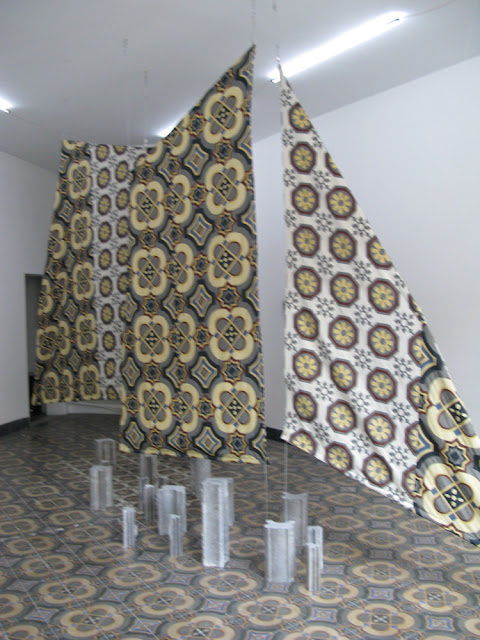 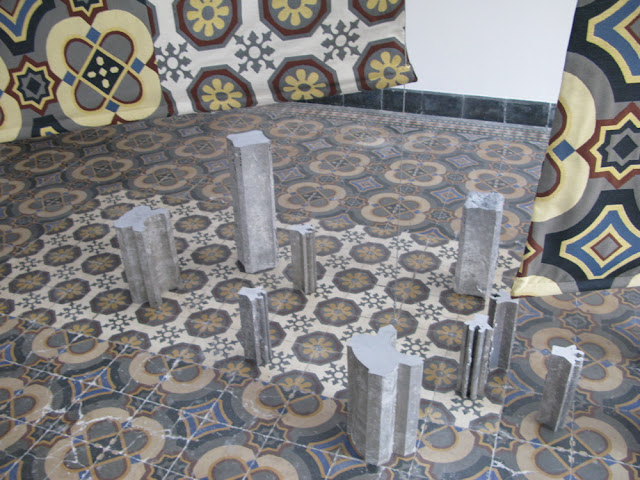 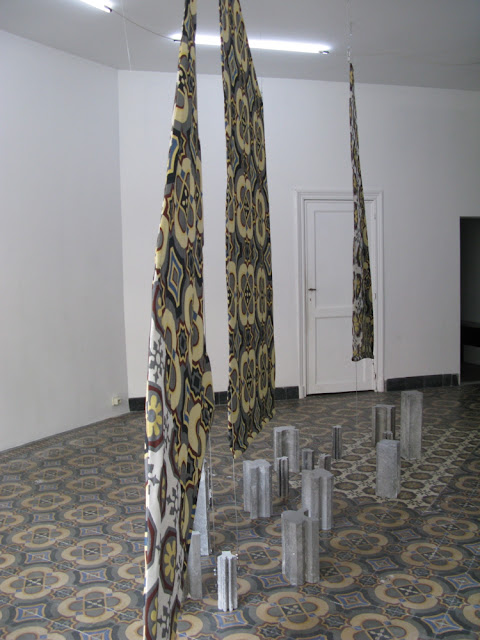 The Good Ship Blank and Ballast (Force Justified), 2010-2012
Woven fabric, Re-cast Aluminium (Dimensions variable)
(...) The sculptures were made out of 98 aluminium copies of Brancusi's Newborn sculpture. These copies were melted down and recast to fit the ornament of the gallery's floor. The notion of 'ballast' implies something that is shaped entirely by its function - simply being dumb weight - without any necessity of representational qualities. 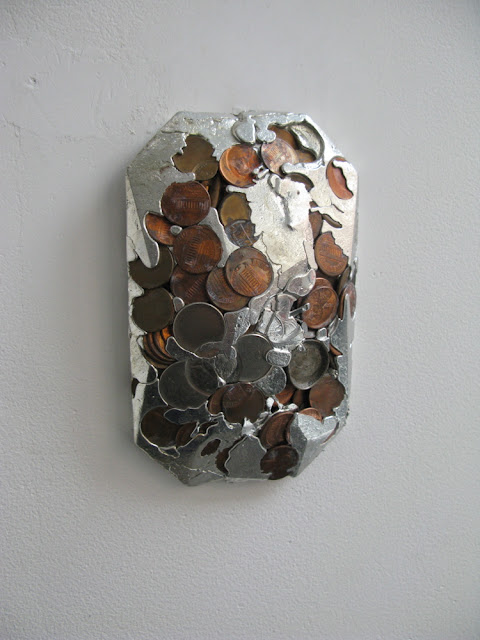 Liquidity in the Mind of the Fool, 2012
Glass, Enamel on copper, Tin, Bronze, Fossils, Shells, Coins, Books (Dimensions variable).
"Liquidity in the Mind of the Fool contains small Brancusi's Newborn sculptures now tumbled and submerged in melted glass or enveloped in Tin. Visible through a melted red glass panel is the original image of the woodcut, now transformed in to a specially printed secure bank note. One of the sculptures is made up of badly minted coins, which present a balance between material and symbolic, with the validating stamp sliding from the face of the metal disc."
See images of Skaer's 'Force Justify (Part 1)', also at Tulips & Roses.
Tulips & Roses
19, rue de la Clé
1000 – Brussels
BELGIUM
Images 1–9: Courtesy of Sarah Ortmeyer and Meessen de Clercq.
Images 10–13: Courtesy of Lucy Skaer and Tulips & Roses, Brussels.
All photos: Latitudes | www.lttds.org