Fifth episode of 'Incidents (of Travel)' – Dispatch by Simon Soon and chi too from Terengganu, Malaysia 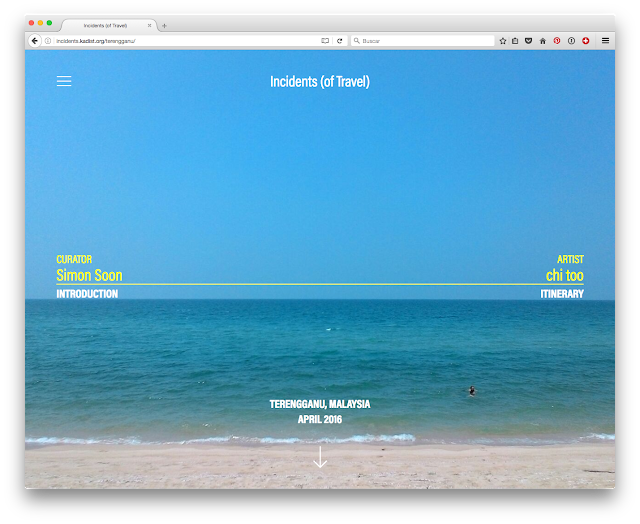 http://incidents.kadist.org/
The fifth 'Incidents (of Travel)' episode narrates an encounter between curator Simon Soon and artist chi too. Their offline day took place in April 2016, when they visited the Malaysian North Eastern state of Terengganu, where chi spent some time in 2013, surrounded by "men and women who work(ed) multiple jobs as a fishermen, house builders, boat builders, farmers, coconut pickers, food producers, and everything else that matters." 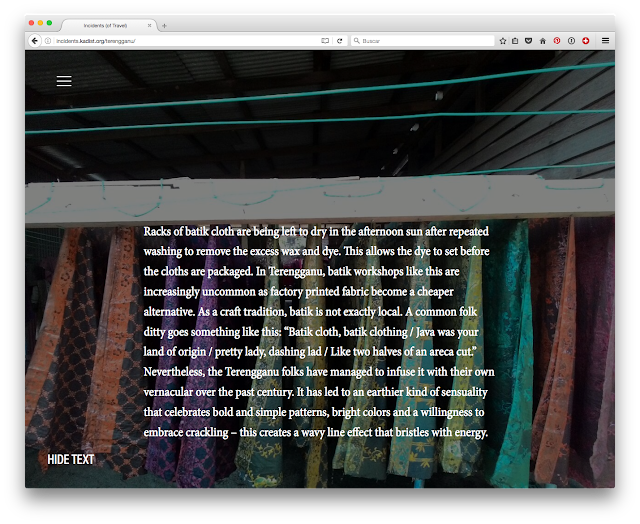 Each of the 16 photographs and videos is augmented by one or more extra assets (a brief commentary, a caption or a soundscape), accessed by clicking the words which overlay the images. 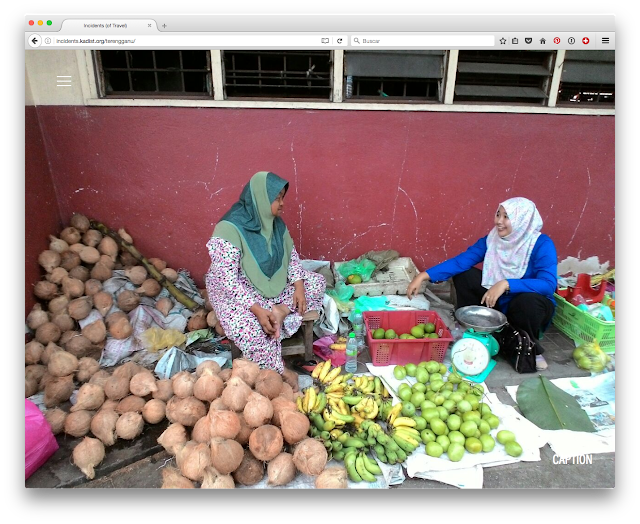 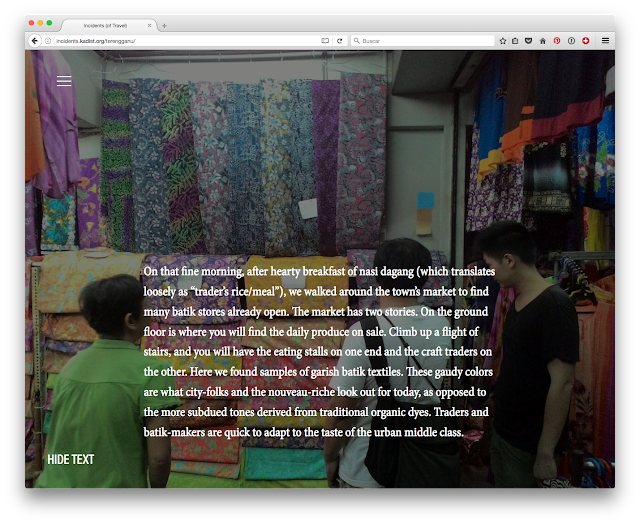 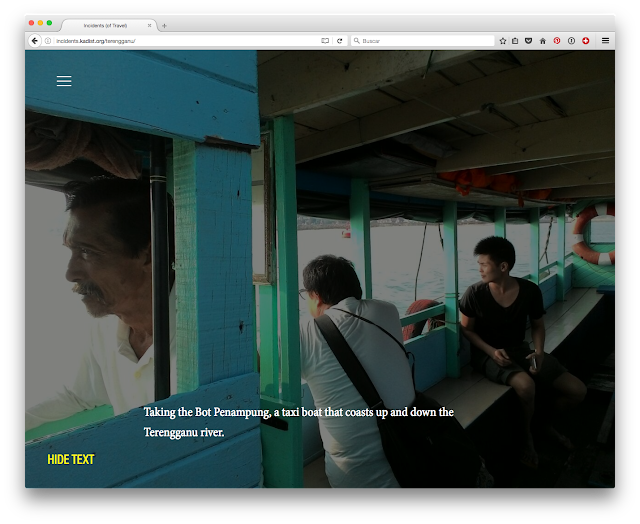 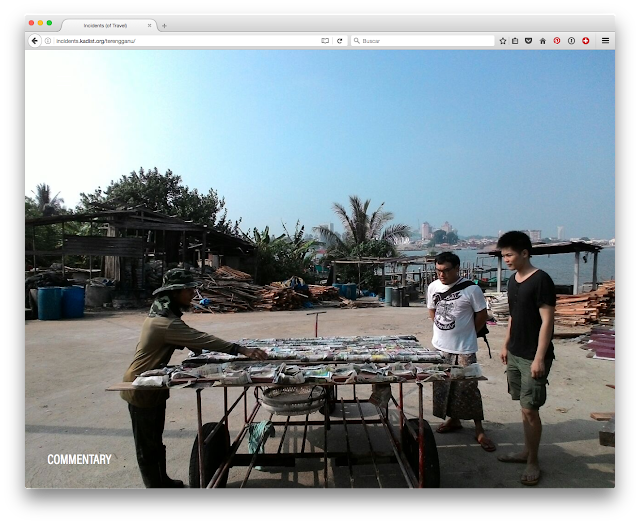 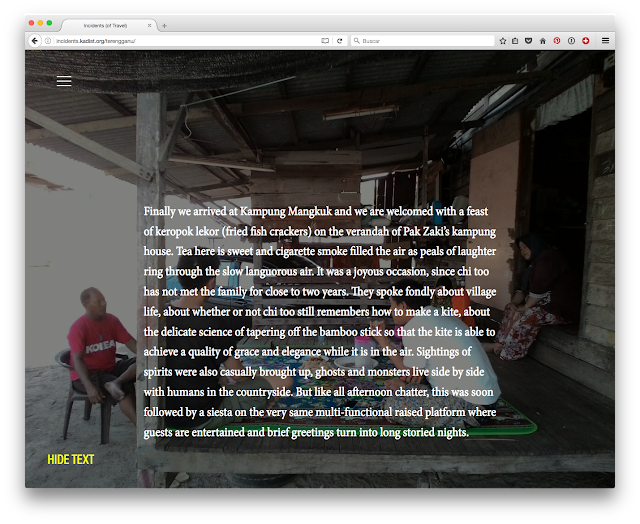 Originally conceived by Latitudes as day-long artist-led tours around Mexico City in 2012 (with five dispatches presented as part of an exhibition on Latitudes' curatorial practice at Casa del Lago) 'Incidents of Travel' had sequels in 2013 in Hong Kong (online dispatches published via twitter, instagram, and soundcloud) and San Francisco in 2015 (daily posts on Kadist' instagram as part of their #ArtistNotInTheStudioCuratorNotAtTheOffice take over initiative).

The project explores the chartered itinerary as a format of artistic encounter and an extended conversation between curator/s and artist/s. Online storytelling presents and documents curatorial fieldwork and an offline day conceived by an artist for a curator.
Since April 2016 Kadist and Latitudes partnered in a new 'distributed' phase of 'Incidents (of Travel)' as part of Kadist Online Projects. This new phase is developed as an online periodical that publishes regular contributions from invited curators and artists working around the world. 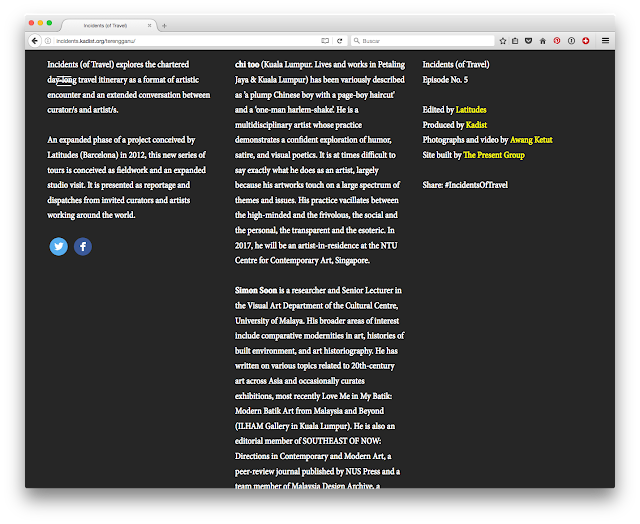 Tue, Oct 30 2012
Below Max Andrews' frieze review on the exhibition 'Utopia is possible. ICSID. Eivissa, 1971' currently on show (on view until 20 January 2013) at the Museu d'Art Contemporani de Barcelona (MACBA). An interesting follow up is Ethel Baraona Pohl's review on Domus (published 15 October 2012) which is accompanied by a lot more photodocumentation presented in the exhibition. 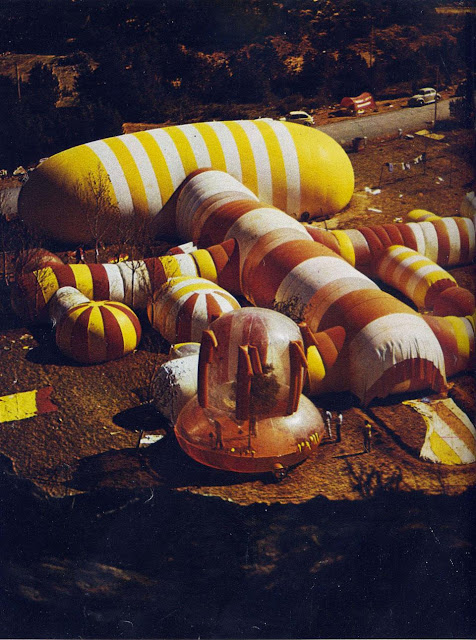 Instant City, 1971. Col·lecció MACBA. Centre d'Estudis i Documentació. Fons Xavier Miserachs
‘This will be an ICSID Congress only 10 metres from the sea,’ read the welcoming Bulletin of the Seventh Congress of the International Council of Societies of Industrial Design in 1971. ‘The environment, the climate and the sea bathing will act as a stimulant to the general business of the Congress.’ As 1,500 delegates registered at the ziggurat-like hotel venue in northern Ibiza, the more adventurous made their way to Instant City, an inflatable camp below on Sant Miquel bay. Three days of meetings, debates, performances and partying were to follow –a professional design conference that was also a beach-side experiment in leisure and the creative potential of industrial plastic. The exhibition ‘Utopia is Possible’ was not only significant as an exercise in advocating the pioneering importance of an interdisciplinary festival that predated the better-known Encuentros de Pamplona’ (Pamplona Meetings) the following year – both all the more astonishing as Spain remained under the grip of dictatorship until 1975 – but also (and following a sprawling exhibition about the latter at Madrid’s Museo Reina Sofía in 2009) as a corollary of the emergence of curatorial and exhibition history as legitimate fields of study, as exhibition.

‘Utopia is Possible’ remembered and celebrated an event that evoked a meltdown of academia, inflatable architecture, cinema, Catalan artistic vanguardism and countercultural ceremonies – part ‘Exploding Plastic Inevitable’, part technology enthusiast craft convention. Through teeming type and handwritten correspondence arranged in vitrines, hundreds of photographs, technical notes and newspaper reports – as well as four projections showing archival footage and a dozen monitors presenting newsreels and newly-made interviews with those involved – it revealed a project that clearly had a life-changing impact on those who experienced it. ICSID 1971 championed liberal social innovation and user-generated content. ‘This is an “open” congress’, declared its introductory statement, ‘a new experience […] for the first time the congress members will be able to participate to the utmost […] this is YOUR congress.’ The proceedings in the hotel comprised ‘Speaking Rooms’ with themes proposed by delegates, 65 talks including ‘The House Style of the Netherlands railway’,‘What We Are Doing in the Belgrade School of Design’, and ‘Basic Design with Computers’ – the latter led by the pioneering Centro de Cálculo (Computing Centre), a collaboration between Madrid’s Complutense University and IBM.

Down by the beach, meanwhile, the participation was of a somewhat different order – kinetic sculptural events with air, water, fire and food. Josep Ponsatí collaborated with members of the Grup Obert de Disseny Urquinaona (Urquinaona Open Design Group), who themselves collaborated in the pop-style signage of the congress, which was replicated in the show’s exhibition design. They tethered together 12 pairs of huge air-filled white plastic pillows that floated out over and on the bay like a giant flower. Vacuflex-3 (1971) by Antoni Muntadas and Gonzalo Mezza is a portable sculpture in the form of a 150-metre flexible plastic pipe which, with teamwork, can be variously carried around, used to spell out words on the sand (‘LOVE’, ‘LAND’, ‘HERE’) or floated on the sea. The opening dinner took the form of a multi-colour ritual orchestrated by Antoni Miralda, Jaume Xifra and Dorothée Selz; masked performers and diners wore green, red, blue and yellow cloaks, and feasted on similarly coloured paella and wine.

Yet Instant City took such multi-coloured experiences to architectonic dimensions, and it remains the ideological and pictorial emblem of the congress. Architecture students Carlos Ferrater and Fernando Bendito had persuaded architecture professor José Miguel de Prada Poole to transform their idea of inflatable student accommodation into reality. What resulted was a global manifesto for a new way of living intended to embrace the ‘nomadic and mobile’ values of impermanence and flexibility. Following publicity in colleges and magazines around the world, scores of volunteers came in the weeks before the congress to collaborate in stapling together a pop-up plastic community. Instant City was the backdrop to some of the exhibition’s most striking images, of bemused locals in traditional dress watching bearded design hippies building something between Hélio Oiticica’s ‘Penetrables’ and Maurice Agis’s ill-fated Dreamspace V (an inflatable environment that killed two women when it broke free from moorings in 2006). And although the taste of Utopian living was evidently challenged by the whiff of residing in sweltering polytunnel tentacles with too few toilets, it also inspired some soaring prog rock poetry that, perhaps more succinctly than any other words in the exhibition, gave a blast ofthe elaborate techno-paganism which must have blown minds at this extraordinary Congress. ‘Green cornfields alongside Instant City / Awaken to Ibizan sunrise’, read a typewritten sheet alongside module construction diagrams. ‘We are children of the future / Born into the paleo-cybernetic age / our minds extended electrically through the video sphere.’

‘Utopia is Possible’ offered a timely pre-history of participatory practice from a Spanish perspective and, against the backdrop of contemporary funding cuts, an object lesson in artistic solidarity and internationalism against the odds. 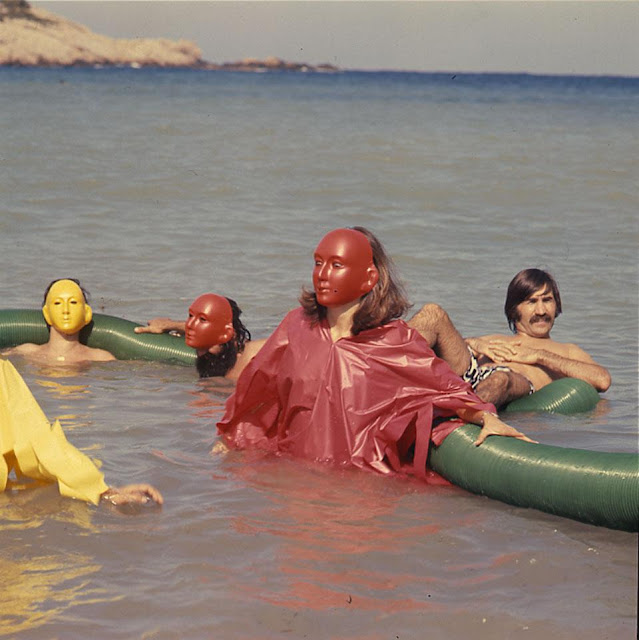