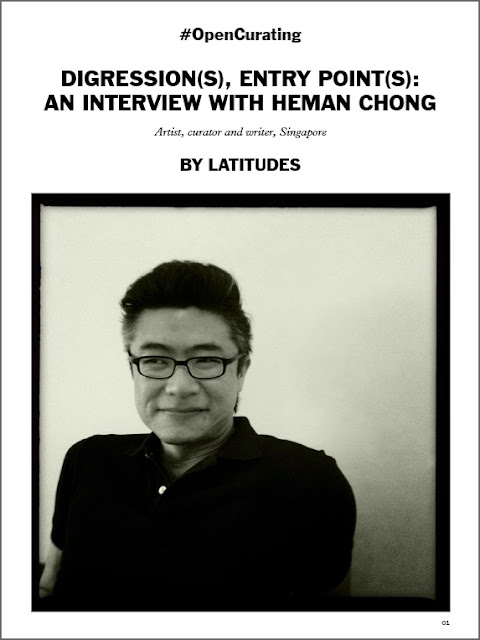 Interview available for download as a pdf or readable on ISSUU via Latitudes' web.
Heman Chong’s art practice is comprised of “an investigation into the philosophies, reasons and methods of individuals and communities imagining the future”. His ongoing project, The Lonely Ones, looks at the representation of solitude and the “last man on earth” genre in art, film and literature, and is the basis for a forthcoming novel entitled Prospectus. Chong’s recent solo exhibitions include LEM 1, Rossi & Rossi, London (2012), Calendars (2020–2096), NUSMuseum, Singapore (2011) and The Sole Proprietor and other Stories, Vitamin Creative Space, Guangzhou (2007). He has participated in numerous group exhibitions including the Asia Pacific Triennale 7 (2012), Performa 11 (2011), Momentum 6 (2011), Manifesta 8 (2010), Busan Biennale (2004), and the 50th Venice Biennale (2003) representing Singapore. Amonograph of his work entitled "The Part In The Story Where We Lost Count Of The Days", edited by Pauline J. Yao, will be published in June 2013 by ArtAsiaPacific.

The interview was initiated at Spring Workshop, Hong Kong, in the context of Chong’s invitation to Latitudes to make a curatorial residency as part of Moderation(s), a year-long series of programming between Spring and Witte de With Center for Contemporary Art, Rotterdam. "Digression(s), Entry Point(s): An interview with Heman Chong" also includes a guest spot with Gotherburg-based artist and writer Anthony Marcellini.