01 Jul 2014
After a morning lecture introducing a range of our projects to the 11 participants of Curating Lab 2014, we proposed a challenging exercise: to define a succinct "about us" paragraph for three imaginary institutions. (Named after the first three Pacific hurricanes of the 2014 season, no less.) Following the root of word "institution" (to establish, to set up), the task was not an architectural challenge nor a branding exercise, but one that first asked what practices are imagined to be initiated, how programmes are established and for whom are they set up.
Participants took into account the parameters we described for each of three art-institution typologies – a residency/studio programme; an annual festival and acommissioning body. After a one hour brainstorm within each group, participants came up with a paragraph that concisely communicated the "vision and values" of the new entities, responding to "what we do, how do we do it and why we do it that way".

The task wasn't oriented towards building a "business plan", though an integral part involved consideration of funding models, and who or what has a stake in the imagined organisation – city/state, philanthropists/donors, users/members/tickets, prizes/open calls, etc. We didn't expect job descriptions, but participants were encouraged to consider what kind of roles the staff within the imaginary institution might take up – would it have a core full-time team or occasional collaborators? What skills or roles would be taken up across curating, producing, publishing, researching, hosting, leadership, and so on?
The exercise was not to come up with a pitch to potential supporters (i.e. in future tense), but to exercise imagination in the present and to define what an organisation stands for and actually does in a succinct way. The aim was to think holistically about their "pet" organisation, its different programme strands and its relation to its local/international network.
1. CRISTINA – A residency/studio programme. 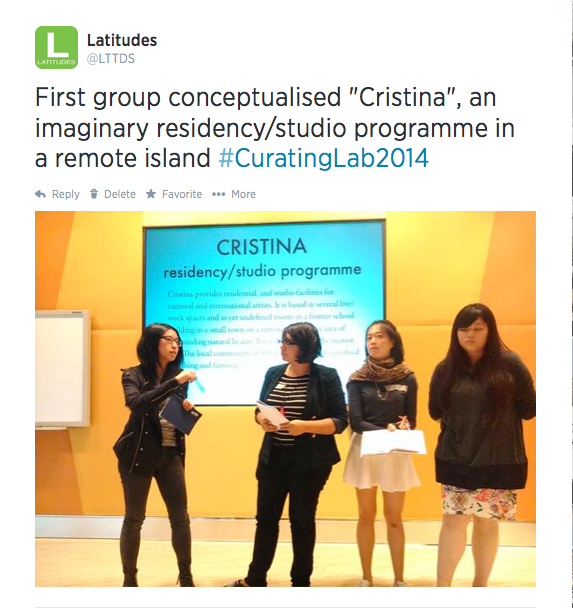 "Cristina provides residential, and studio facilities for national and international artists. It is based in several live/work spaces and as yet undefined rooms in a former school building in a small town on a remote island in an area of outstanding natural beauty. It is a day's travel to the nearest city. The local community of 800 people are mostly involved in fishing and farming." 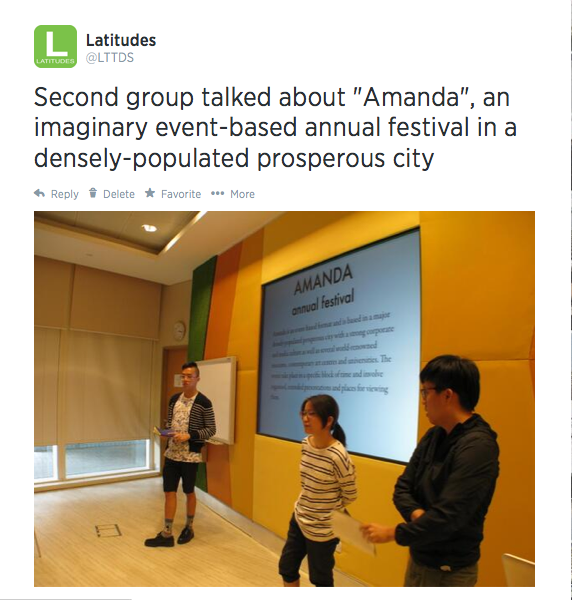 "Amanda is an event-based format and is based in a major densely-populated prosperous city with a strong corporate and media culture as well as several world-renowned museums,  contemporary art centres and universities. The events take place in a specific block of time and involve organised, extended presentations and places for viewing them." 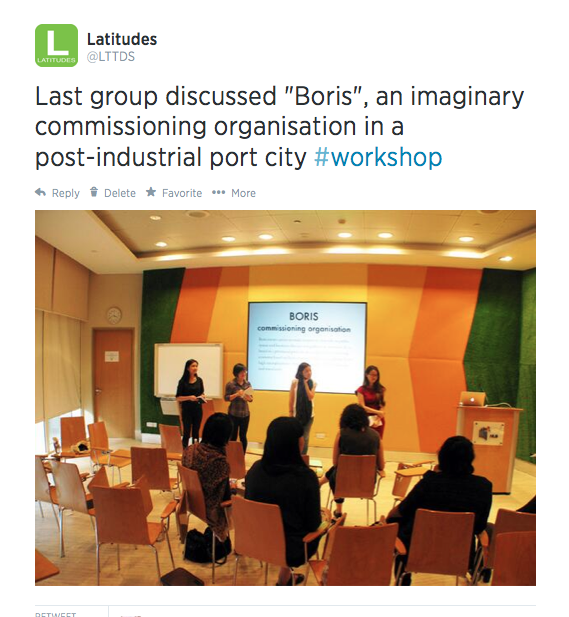 "Boris invites artists to make temporary artworks in public spaces and locations that are not galleries or museums. It is based in a provincial port city that used to have a thriving economy based on heavy industry. The city is suffering from high unemployment, there are many abandoned buildings and wastelands."

–
This is the blog of the independent curatorial office Latitudes. Follow us on Facebook and Twitter.
All photos: Latitudes | www.lttds.org (except when noted otherwise in the photo caption)
This work is licensed under a Creative Commons Attribution-NonCommercial-NoDerivs 3.0 Unported License.
2014, Curating Lab, exhibition-making, Heman Chong, institution, Singapore, training programmes

Report of the symposium "When Does an Exhibition Begin and End?", National Library of Singapore, 14 May 2014 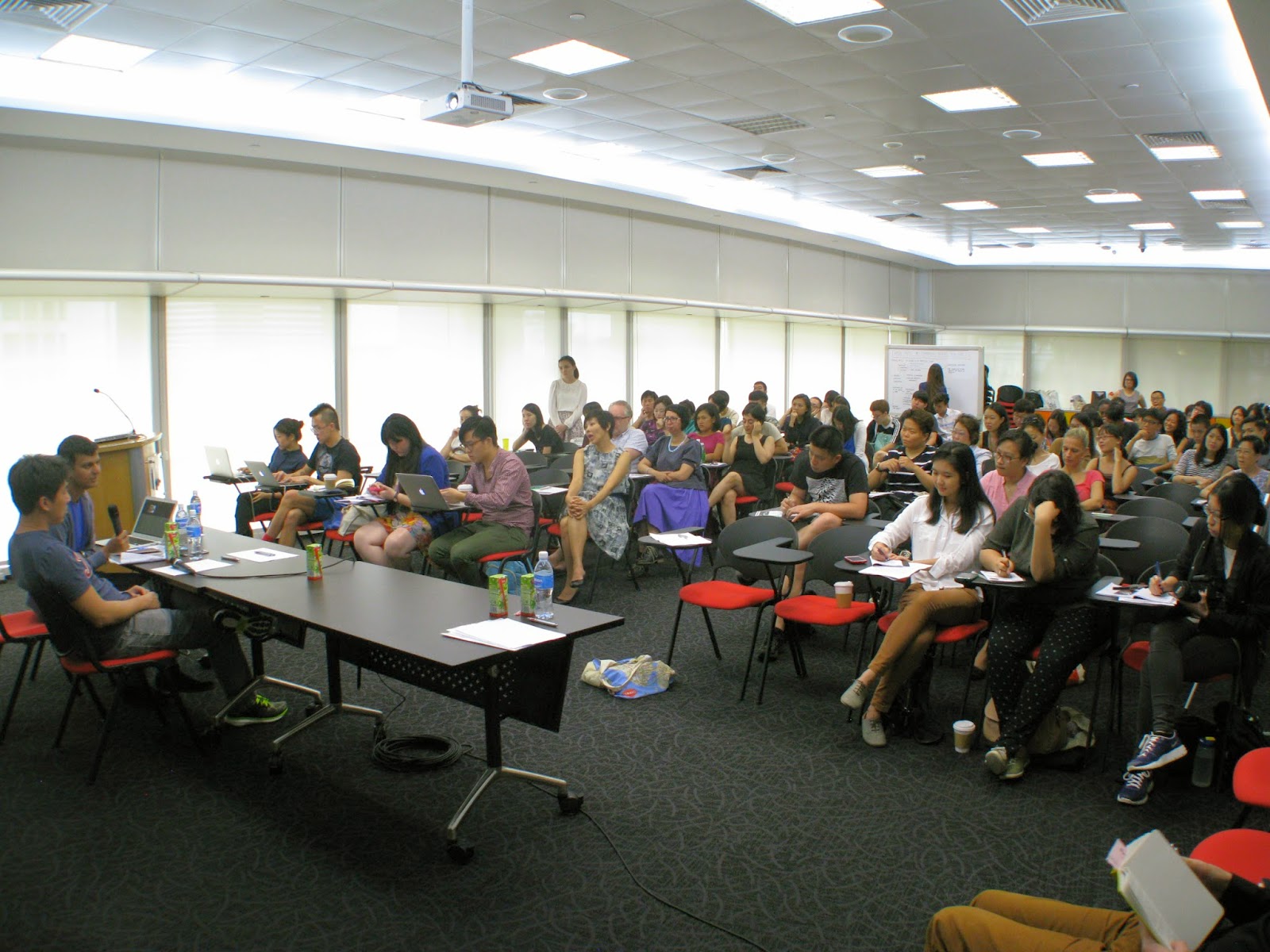 During the presentation of Shabbir Hussain Mustafa and Charles Lim. Photo: Latitudes.
The public symposium "When Does an Exhibition Begin and End?" (14 May 2014) was part of this year Curating Lab 2014 programme organised by NUS Museum. The event, convened and moderated by Heman Chong and Latitudes, counted with the participation of Shabbir Hussain Mustafa (Curator, National Gallery Singapore), Charles Lim (artist); Anca Rujoiu and Vera Mey (Curators, CCA — Centre for Contemporary Art, Singapore) and artist Shubigi Rao.

Addressing the format of the exhibition in terms of duration and process, the public symposium "When Does an Exhibition Begin and End?" consisted of two complimentary sessions that reflected on exhibitions' capacity to articulate its own making and incorporate its own history. In the same way that the Internet has untethered television from fixed schedules and newspapers from print deadlines, the symposium will further ponder on how the exhibition and today's art institutions are undergoing similar transformations. Should exhibitions embrace or resist becoming more like broadcasting or live-publishing? "When Does an Exhibition Begin and End?" considered how exhibitions produce knowledge through the format of conversations between curators and artists. 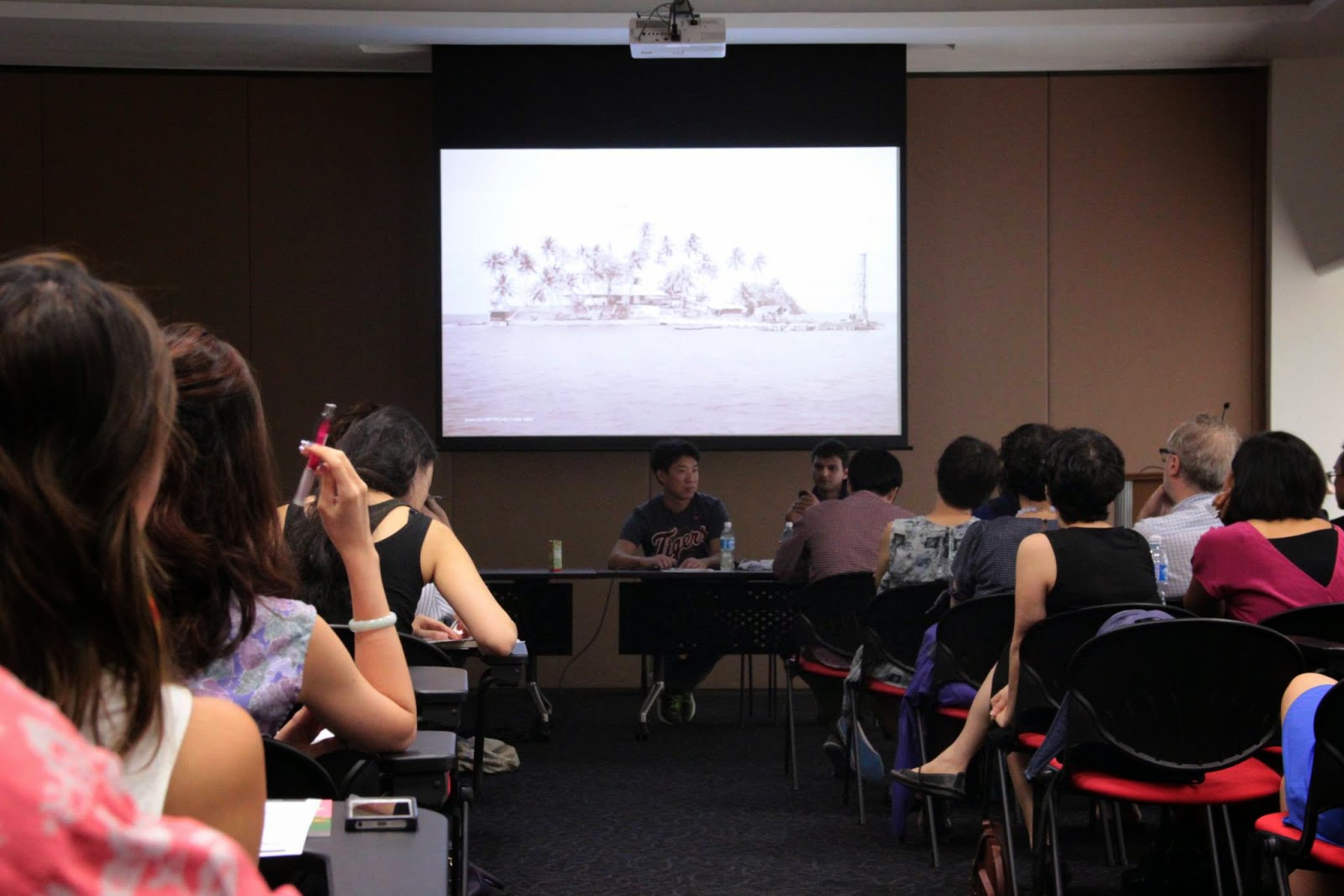 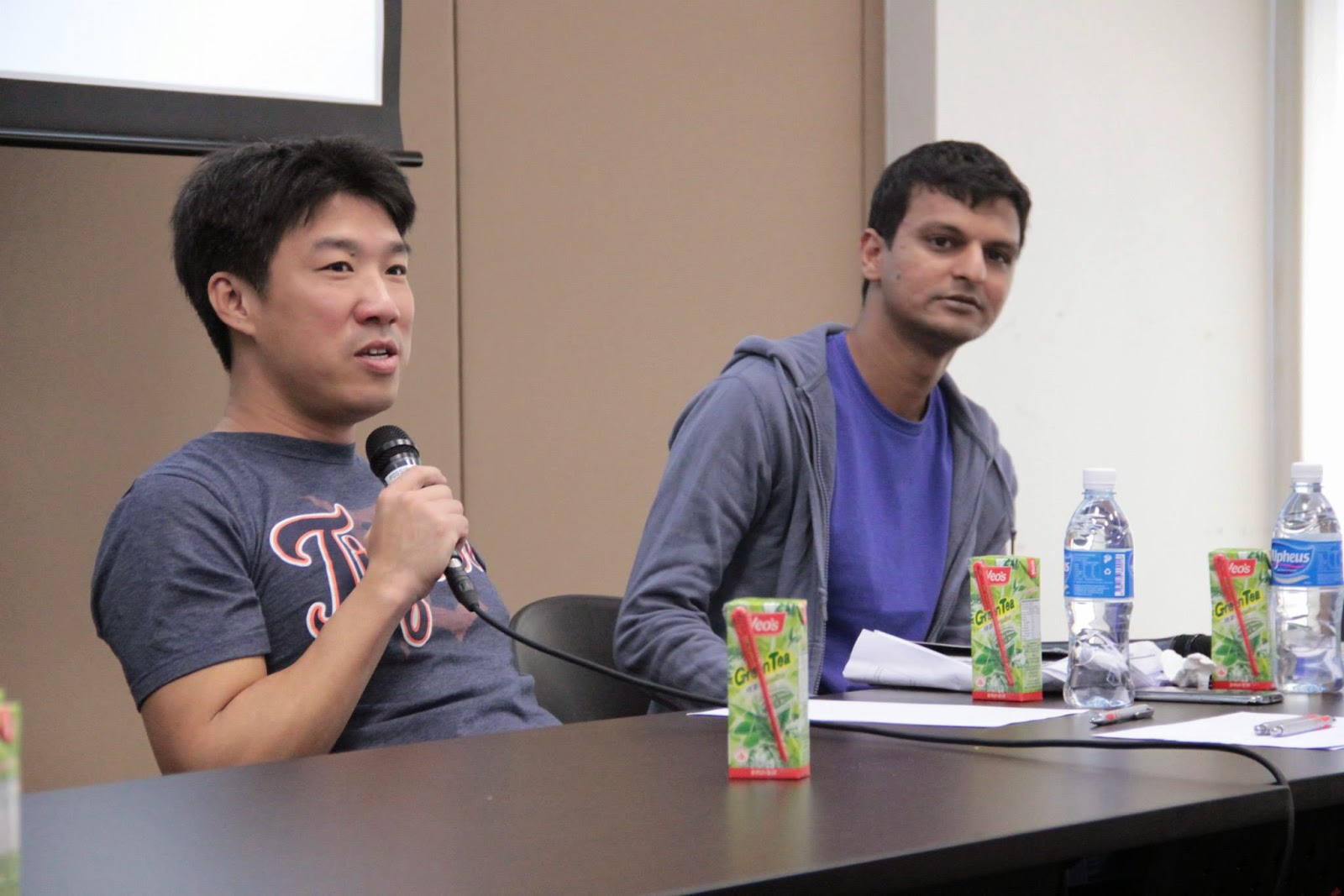 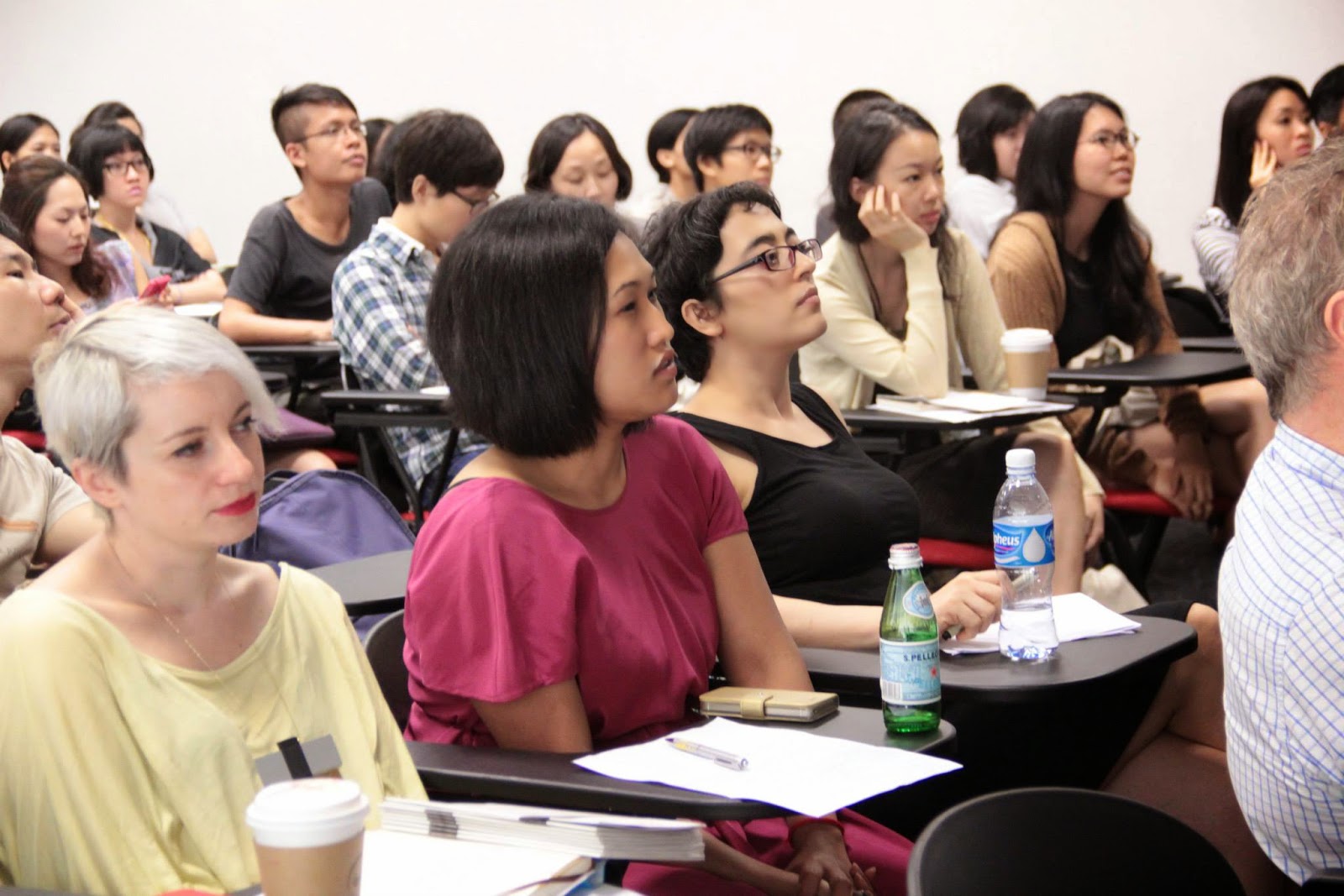 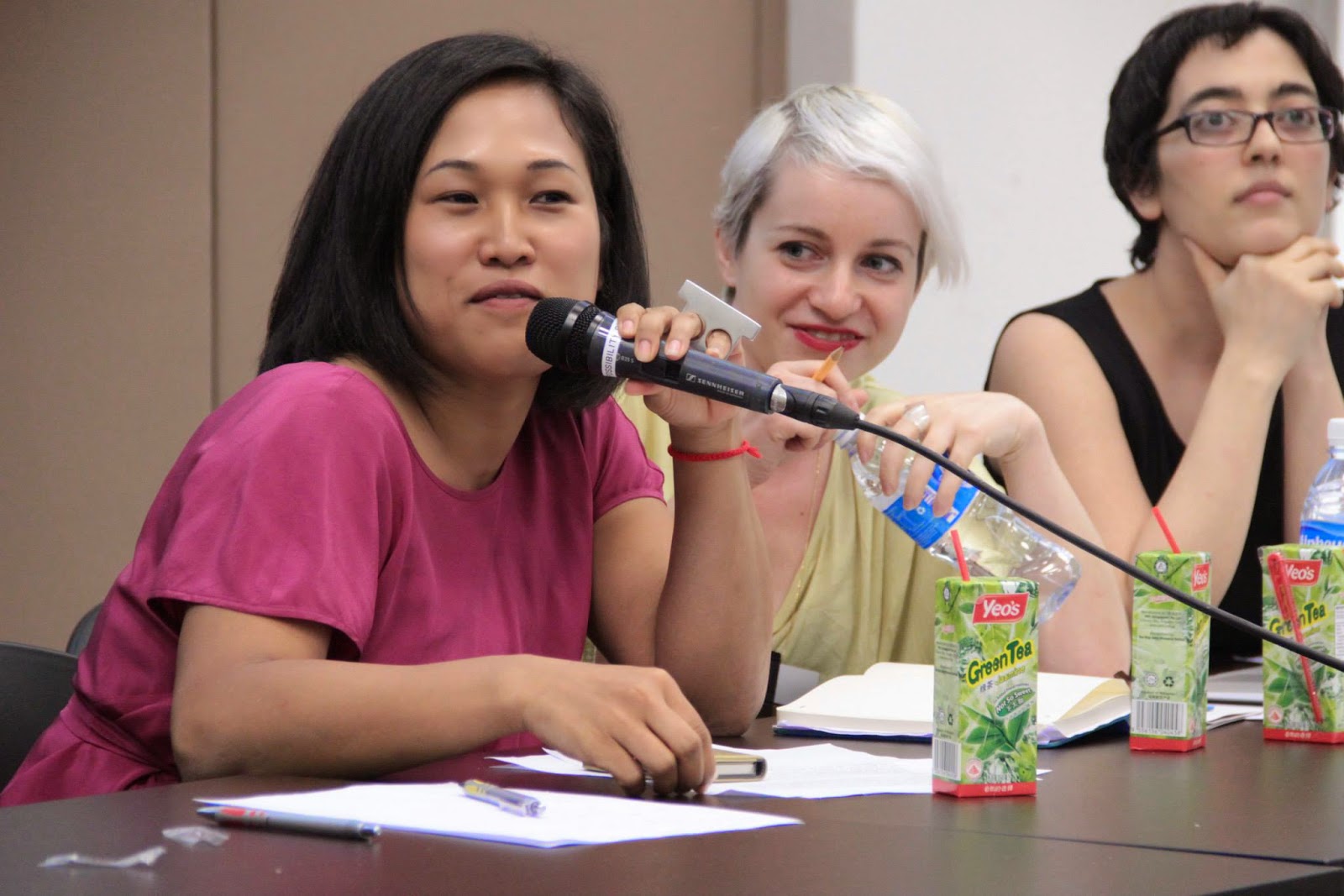 Vera Mey, Anca Rajoiu and Shubigi Rao during the Q&A. Photo: Luca E.C.
The event was an occasion to reflect on the role of a symposium and its public within curatorial practice, and counted with the engagement of Curatorial-Intensive participants who live-tweeted proceedings, a second group mapped concepts of the discussions (see photos below), and a final group will soon publish a blog post documenting and reporting the day for those not physically present.
Related links:

"Hauntological trajectories in “When Does An Exhibition Begin And End?”" by Amanda Lee Koe on Art Asia Pacific's blog, 23 July 2014.

"Curating Lab: When Does an Exhibition Begin and End?" by Bruce Quek on Radian, 18 August 2014.

–
This is the blog of the independent curatorial office Latitudes. Follow us on Facebook and Twitter.
All photos: Latitudes | www.lttds.org (except when noted otherwise in the photo caption)
This work is licensed under a Creative Commons Attribution-NonCommercial-NoDerivs 3.0 Unported License.
#OpenCurating, 2014, Curating Lab, documentation, exhibition-making, Heman Chong, photo, report, Singapore, symposium