In conversation for the exhibition catalogue "Limits to Growth" by Nicholas Mangan (Sternberg Press, 2016)

Photos: Latitudes.
After much anticipation, we are elated to see (and touch!) Latitudes' five-part interview with Nicholas Mangan as part of his exhibition catalogue "Nicholas Mangan. Limits to Growth" (Sternberg Press, 2016). The publication is designed by Žiga Testen and includes newly commissioned texts by Ana Teixeira Pinto and Helen Hughes, alongside illustrations of Mangan's work and historical source material.

The five-part interview weaves together a discussion around five of his recent works ‘Nauru, Notes from a Cretaceous World’ (2009), ‘A World Undone’ (2012), ‘Progress in action’ (2013), ‘Ancient Lights’ (2015) and his newest piece ‘Limits to Growth’ (2016) commissioned for this exhibition survey. Latitudes’ dialogue with Mangan, began around a research trip to Melbourne in 2014, and continued in the form of the public conversation event that took place at the Chisenhale Gallery, London, in 2015, as well as over Skype, email, snail mail and walks. 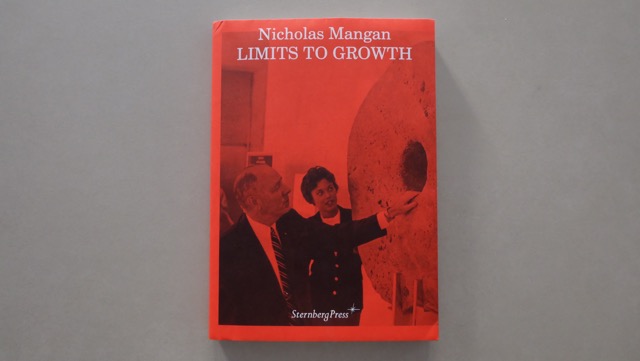 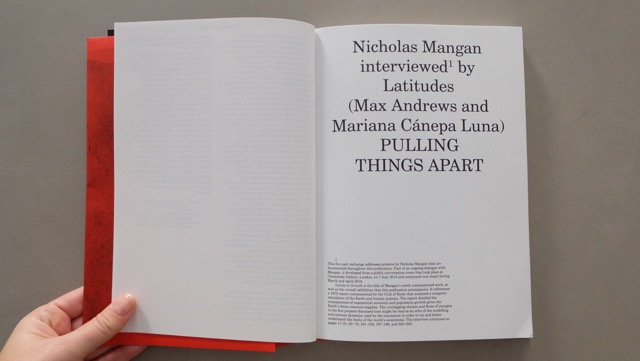 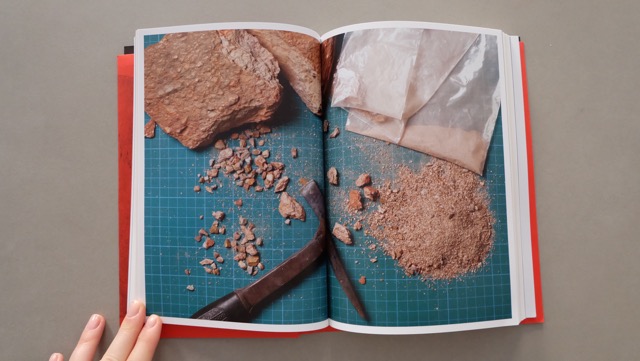 The publication release coincides with Mangan's eponimous exhibition survey which began in July in Melbourne's Monash University Museum of Art and just opened this past weekend in Brisbane's IMA. The show will further tour to Berlin's KW Institute for Contemporary Art in Summer 2017. 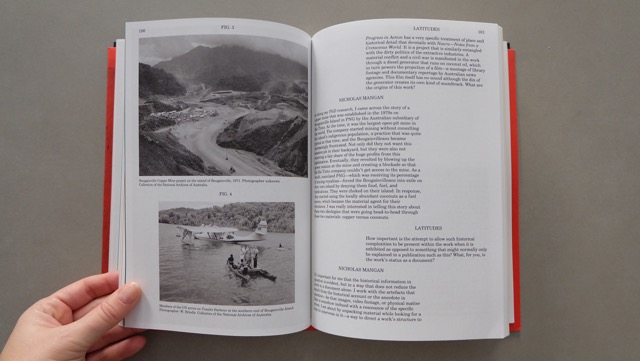 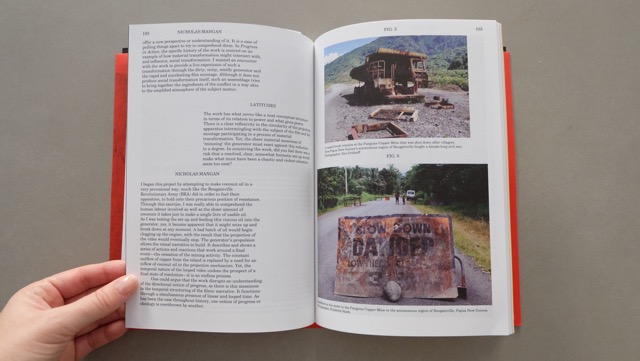 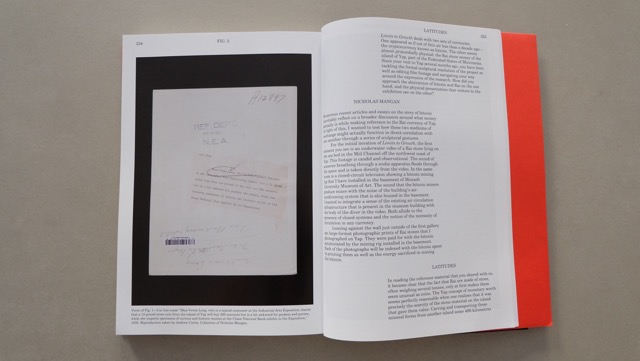 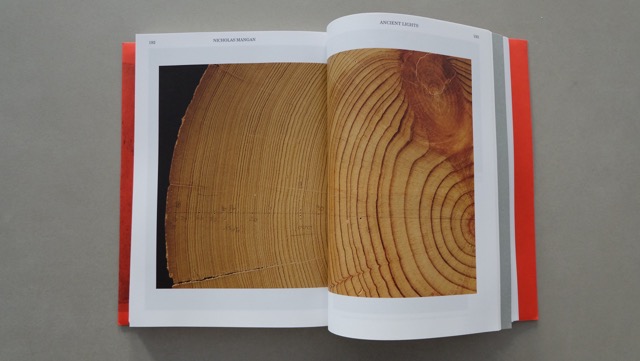 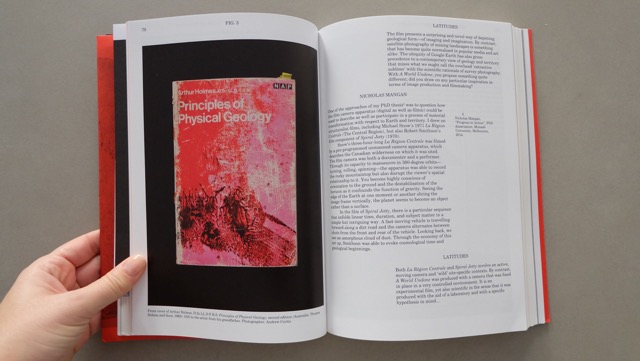 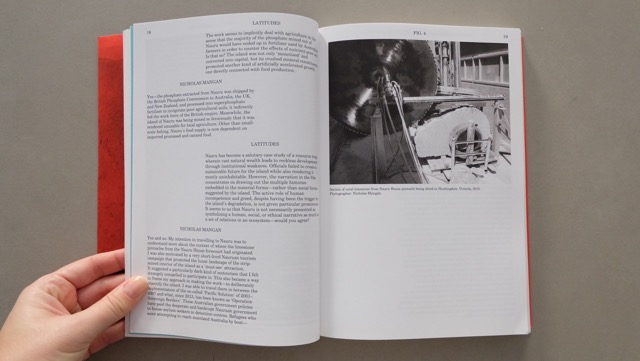 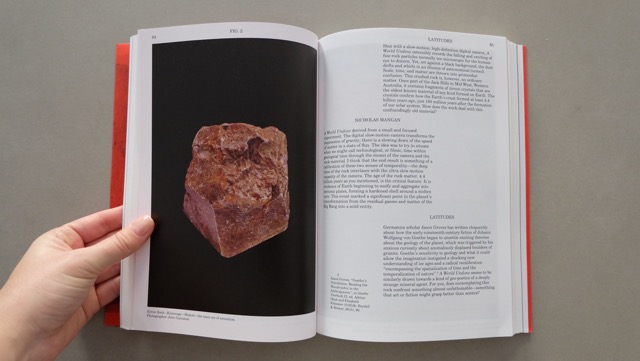 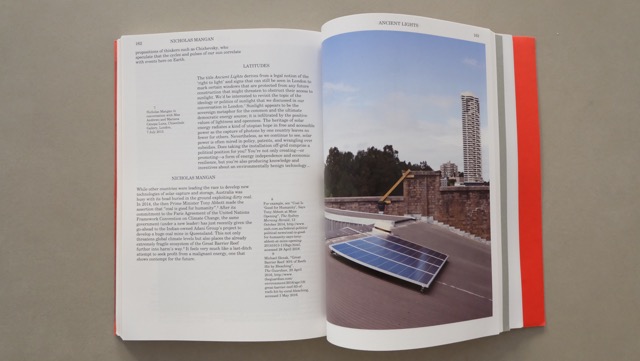 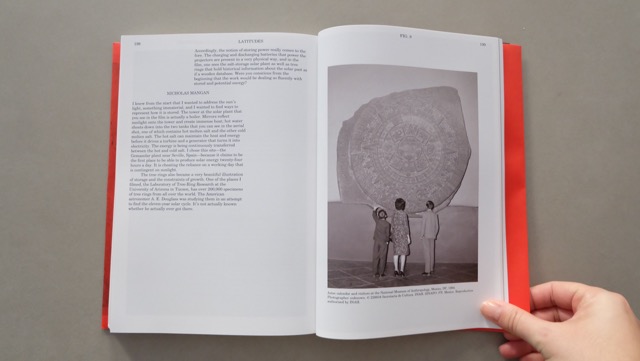 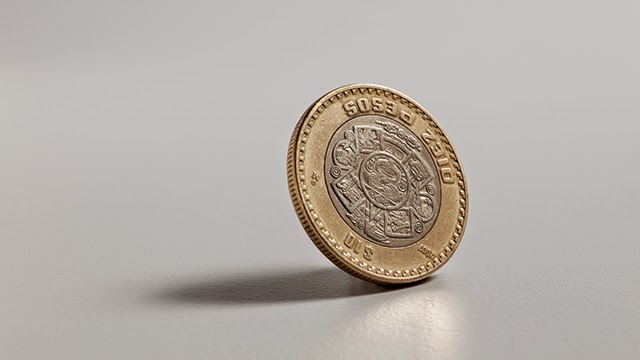 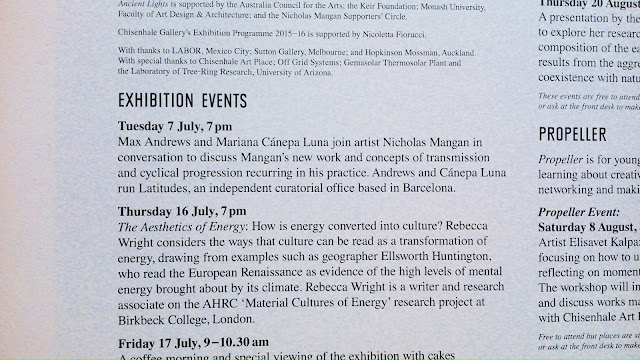 Publication "A Chronology of Energy- and Art-Related Developments (2013, ongoing)" edited by Christina Hemauer and Roman Keller 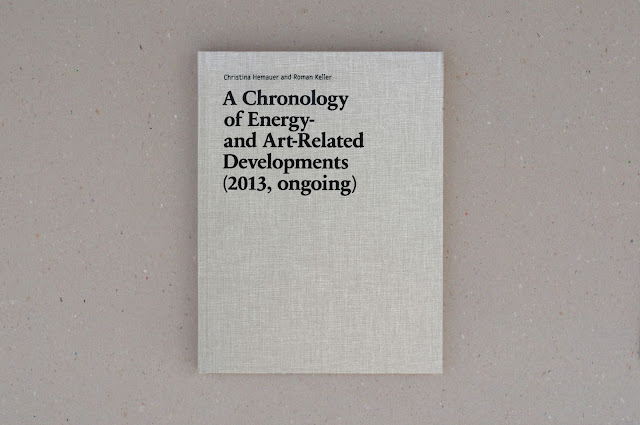 Cover of "A Chronology of Energy-Related Developments (2013, ongoing)".
Photo: Edizioni Periferia.
Last week we received a copy of the wonderful publication by Zürich-based artists Christina Hemauer and Roman Keller, with whom we have collaborated twice in the past, on the Portscapes commission series in 2009 (see photos of project here and a 'making of' video here) and on their solo exhibition 'United Alternative Energies' in 2011 in Kunsthal Århus, Denmark.

Christina Hemauer and Roman Keller maintain the thesis that throughout history, culture and energy have been reciprocal entities: technological change determines cultural achievements and vice versa. 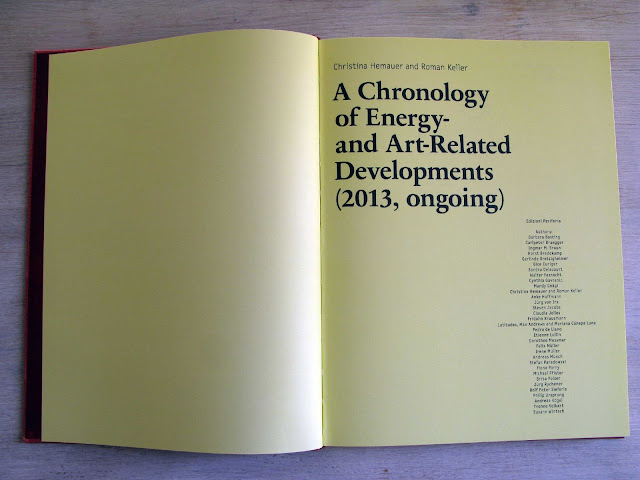 Title page with contributors names. This and the following photos: Latitudes.
Their publication "A Chronology of Energy-Related Developments (2013, ongoing)" is based on the appendix of the six-volume "Encyclopedia of Energy" (2004). Its 64-page appendix sums up historical events of relevance to energy since the existence of Earth. In collaboration with 32 art historians (including Steven Jacobs, Andreas Vogel, Dorothee Messmer), curators (including Fiona Parry, Pedro de Llano and ourselves) and cultural theorists (including Yvonne Volkart, Anke Hoffmann, Rolf-Peter Sieferle) and concluding with an epilogue by Bice Curiger, former Kunsthaus Zürich's curator, the artists have supplemented the appendix (white pages) with «art-related» entries (yellow pages) in words and pictures. 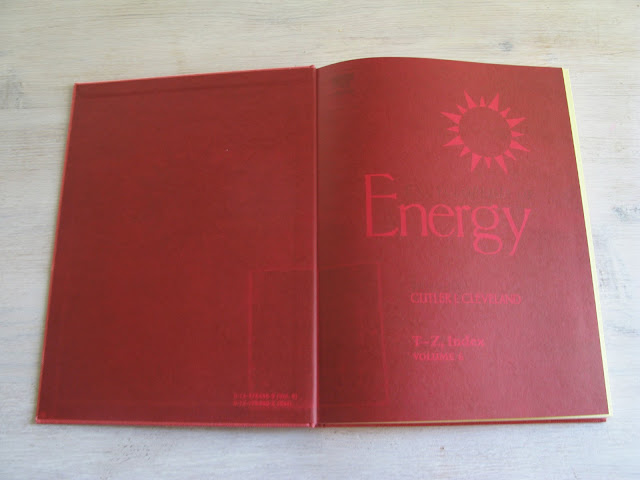 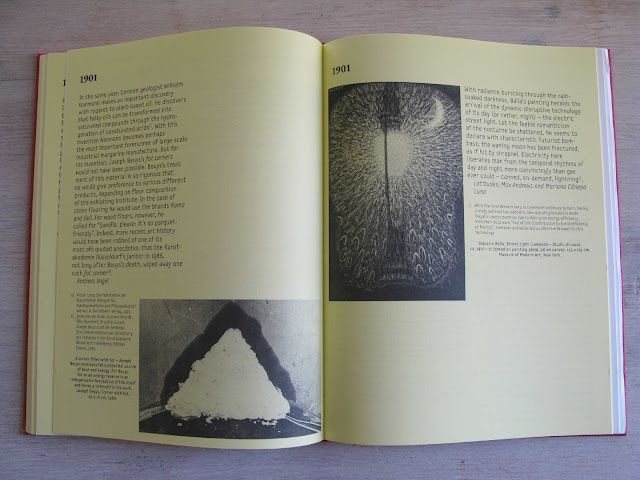 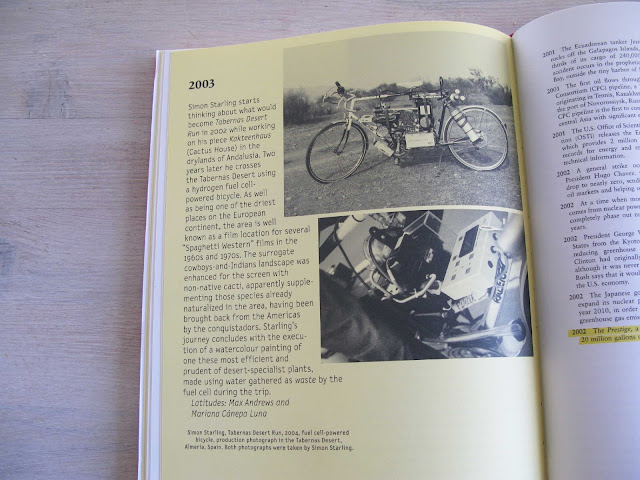 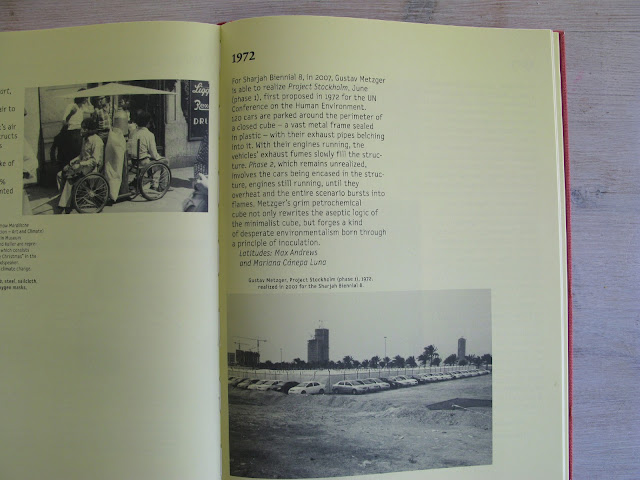 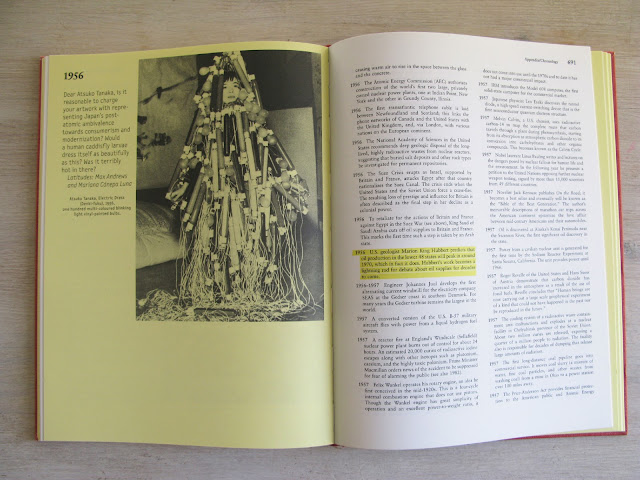 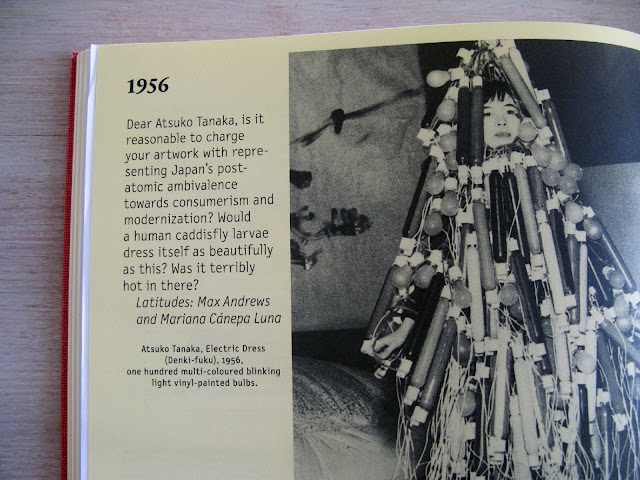 The book was made possible by a Dr. Georg und Josi Guggenheim-Stiftung 2012 grant.


This is the blog of the independent curatorial office Latitudes. You can also follow us on Facebook and Twitter.
All photos: Latitudes (except when noted otherwise in the photo caption)
This work is licensed under a Creative Commons Attribution-NonCommercial-NoDerivs 3.0 Unported License.
2013, Christina Hemauer and Roman Keller, energy use, Fischli and Weiss, Gustav Metzger, Pedro de Llano, Portscapes, Publication, Simon Starling, solar energy, The Aarhus Art Building 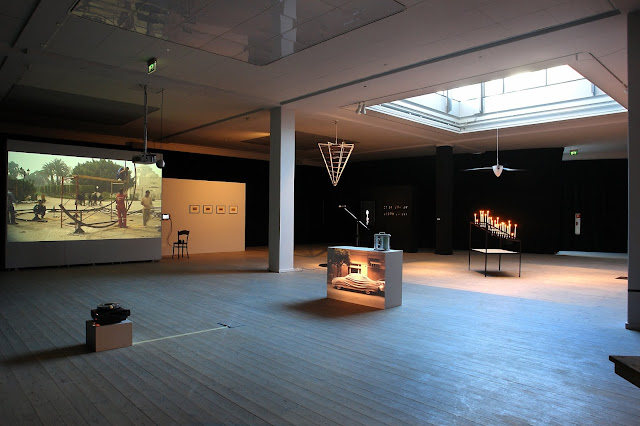 Above and below: Installation view. Photo: Jens Møller Sørensen. Courtesy the artists. 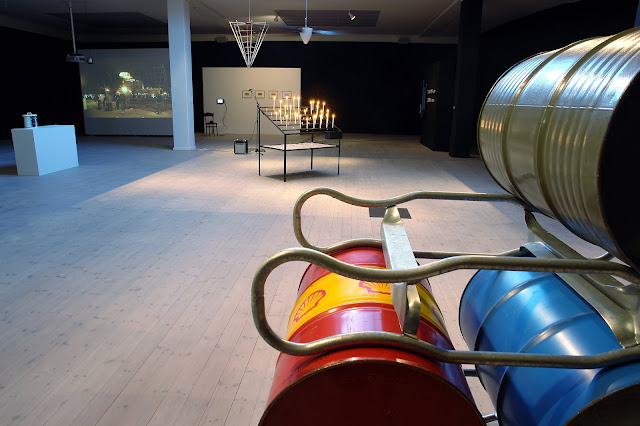 Hemauer | Keller has investigated the concept of energy for several years. One of their main areas of interest is the history of oil and its competing alternatives, notably solar energy. Often involving historical research, remembrance, performance and film, their projects focus in particular on the politics of oil, energy crises, and the pursuit of new technology. (+ info...) 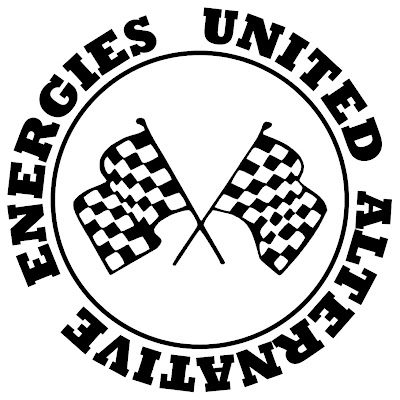 The exhibition 'Christina Hemauer & Roman Keller: United Alternative Energies' will open on Friday 21 January from 5pm and remain on view until 3 April 2011.

The exhibition ‘Christina Hemauer and Roman Keller: United Alternative Energies’ is the most expansive presentation of the work of the Swiss duo to date, featuring ten works, four of which are new productions.

Hemauer | Keller investigate energy – as an allegorical concept, an invisible force, and a defining theme of geopolitics and modernity. One of the main focuses of their practice is the history of oil and the fate and future of its competing alternatives, notably solar power.

Hemauer | Keller make use of a range of strategies – re-enactment and performance, as well as documentary video, sculpture and text. Their work often provides an opportunity to revitalize key historical moments. For example, the 66 minute documentary essay ‘A Road Not Taken’ (2010) examines former US President Jimmy Carter’s early and ultimately futile efforts to raise awareness about oil dependency, as symbolized by the installation, in 1979, of solar panels on the roof of the West Wing of the White House.

Also featured in this exhibition is No.1 Sun Engine (2008–9). In 1913, American inventor Frank Shuman inaugurated the first large-scale solar power generator near Cairo, Egypt. Although it was economically viable compared to coal power, the plant was only used for one year. In 2008 the artists reconstructed two segments of this pioneering facility and established an information kiosk where local residents and passers-by could discover and contribute to its story.

Globalising the Internationale (2006–ongoing) is a choral work which refers to the songs of socialism and the workers' movements – one of the most widespread social upheavals of the late 19th and early 20th Centuries. With this project, the artists aim to use the collective force of the human voice to herald a new age of alternative energy beyond fossil fuels. (+ info...)

Christina Hemauer (1973) and Roman Keller (1969) live and work in Zürich, Switzerland. Recent exhibitions and projects include: Globalising the Internationale, for Portscapes (2009) and Portscapes exhibition, at the Museum Boijmans van Beuningen, Rotterdam (2010); 11th Cairo International Biennale, El Cairo (2008–9), Nettoyage énergétique, Center Contemporary Art Fribourg (2007), A Manifestation, a Dedication and a Place to get the Word out, Swiss Art Awards, Basilea (2007); At this place, Postpetrolism was heralded on 27 April 2006, Kunsthof, Zurich (2006).

The exhibition is one of the 5 proposals selected from over 600, received via Aarhus Art Building's open submission call, and launches the 2011 season 'IMAGINE – towards an eco-aesthetic'.

A 36-page full colour publication in English and Danish will be printed on the occasion of the exhibition. It includes an introductory essay by the curators on the artists' practice as well as short texts about each of the works included in the exhibition.

‘Christina Hemauer & Roman Keller: United Alternative Energies’ has been possible thanks to the generous support of The Danish Arts Council Committee for International Visual Art; Pro Helvetia and the Stanley Thomas Johnson Foundation. 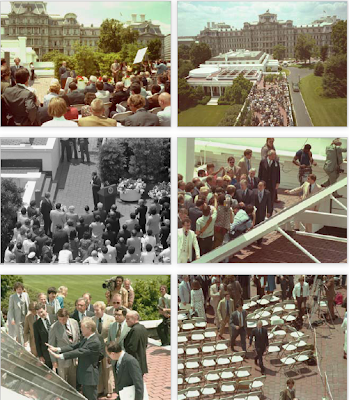 Slides showing the installation of the solar panels on the roof of the White House in 1979
by US former president Jimmie Carter, subject of Hemauer/Keller film 'A Road Not Taken' (2010). Courtesy: the artists
'United Alternative Energies: Christina Hemauer & Roman Keller'
Curated by Latitudes
22 January 22 - 3 April 2011
Opening: 21 January 2011, 5pm

'United Alternative Energies: Christina Hemauer & Roman Keller' is one of 5 exhibition proposals selected from approximately 600 submissions received in response to the Aarhus Art Building's open call for their 2011 programme, entitled 'Imagine: Towards an Eco-Aesthetic'.

Christina Hemauer and Roman Keller have investigated the concept of energy for several years. One of their main areas of interest is the history of oil and its competing alternatives, notably solar energy. Often involving historical research, remembrance, performance and film, their projects focus in particular on the politics of oil, energy crises, and the pursuit of new technology.

The exhibition will be the most comprehensive presentation of the duo's work to date. A small catalogue will be published coinciding with the opening of the exhibition (+ info...) 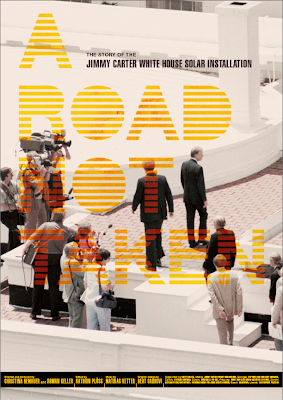 Hemauer & Keller's 'Portscapes' project begins: transportation of a wooden stage along the Rhine from Basel to Rotterdam

Taken by the artists on the 30th October 2009.
'Postpetrolistic Internationale', the project by Zurich-based artists Christina Hemauer (1973) & Roman Keller (1969), started today with the transportation of a wooden stage along the Rhine from Basel (the most upriver navigable point of the Rhine), near the artists’ home, to Rotterdam (where the Rhine joins the sea).

Keller & Hemauer's project emerges from the medium of the collective human voice, the tradition of the aspirational social anthem alongside the artists’ long standing interest in energy use. Upon arrival of the stage, a Rotterdam-based choir will perform the 'Postpetrolistic Internationale', an anthem of hope-in-action on the stage, against a backdrop of local industry, to mark man’s changing relationship with fossil fuels and energy use.

Programmed performances:Saturday 7 November, time TBC, Maritime Museum, Rotterdam – MAP
Sunday 8 November, 13.30h, Futureland, the Maasvlakte 2 visitor center – MAPThe 'Postpetrolism' project (2006-ongoing) was launched with a performance in Zürich in April 2006 in which a new manifesto of hope for the future reality of energy was declared and a plaque erected to mark the end of one energy era (‘peak oil’ was passed in 2005, according to Kenneth S. Deffeyes) and the beginning of another beyond oil.

Images of the journey and arrival of the stage to Rotterdam's port on 2nd November:

Taken by the artists en route and upon arrival to Rotterdam's port.
Keller & Hemauer's project is part of 'Portscapes', a series of art projects commissioned by the Port of Rotterdam Authority with advice and financial support from SKOR (Foundation for Art and Public Space, Amterdam) and curated by Latitudes.

Portscapes' timeline: http://www.dipity.com/latitudes/PORTSCAPES
Keller and Hemauer's participation has been made possible thanks to the support of Pro Helvetia.
Christina Hemauer and Roman Keller, energy use, Portscapes, Rotterdam