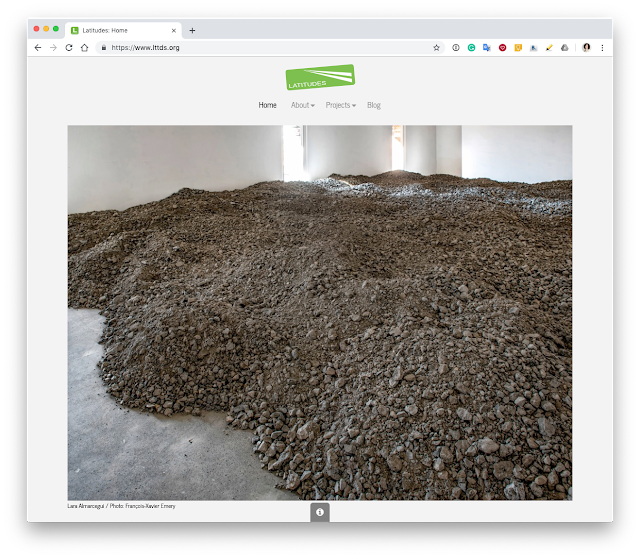 “Lara Almarcegui’s current exhibition at the CAIRN art centre in Digne-les-Bains, southern France, focuses on the nearby Bléone river, its geology, and its exploitation. Latitudes has written an essay entitled ‘Thinking like a drainage basin’ for the accompanying catalogue. Lara’s project Béton (Concrete) has two parts. The first, seen here, involves the floor of the art centre being covered with crushed cement, gravel and sand. This raw material is the remains of several concrete structures — weirs — that were placed in the river in a failed attempt to stabilise a riverbed that had been extensively dug out over the preceding decades to produce gravel for the construction industry. The watercourse and its ecology is now being restored, and the weirs were recently removed.”

—> Continue reading
—> After May it will be archived here.
Cover Stories' are published on a monthly basis on Latitudes' homepage featuring past, present or forthcoming projects, research, texts, artworks, exhibitions, films, objects or field trips related to our curatorial activities. 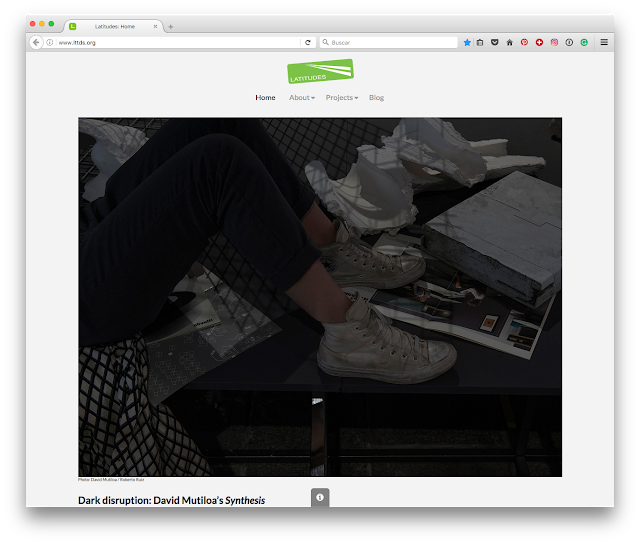 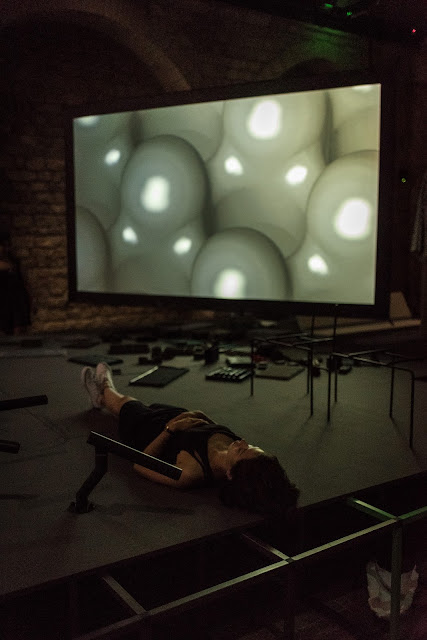 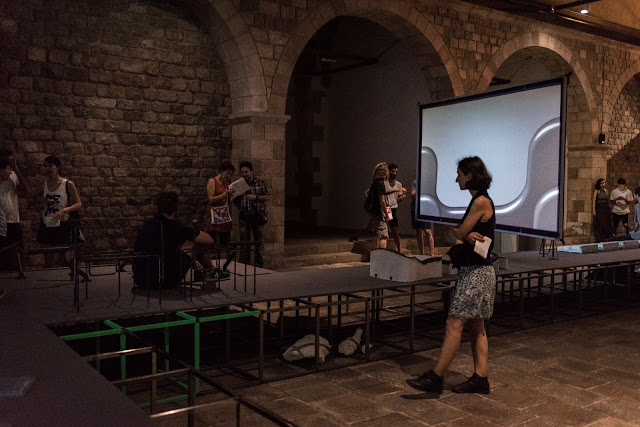 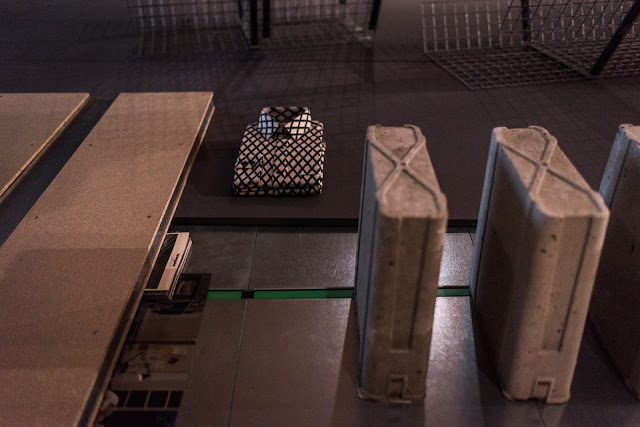 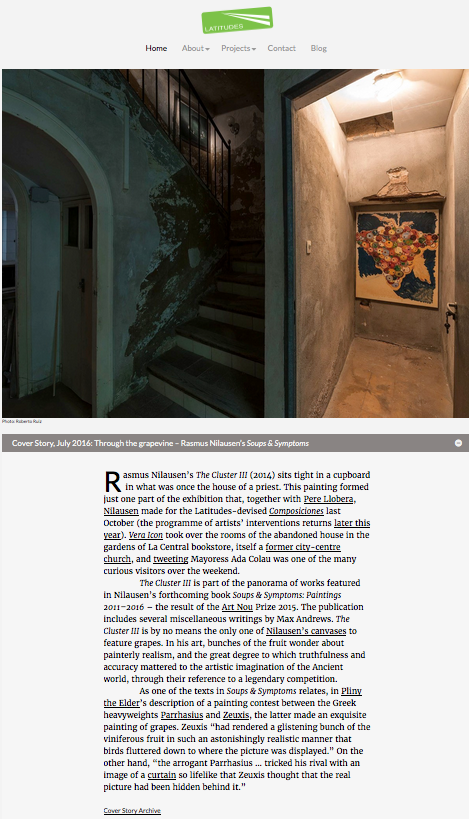 www.lttds.org
New Monthly Cover Story "Through the grapevine – Rasmus Nilausen’s Soups & Symptoms" is now on www.lttds.org (after July 2016 it will be archived here)

"Rasmus Nilausen’s ‘The Cluster III’ (2014) sits tight in a cupboard in what was once the house of a priest. This painting formed just one part of the exhibition that, together with Pere Llobera, Nilausen made for the Latitudes-devised Composiciones last October (the programme of artists’ interventions returns later this year). "Vera Icon" took over the rooms of the abandoned house in the gardens of La Central bookstore, itself a former city-centre church, and tweeting Mayoress Ada Colau was one of the many curious visitors over the weekend."
—> Continue reading...

Cover Stories' are published on a monthly basis on Latitudes' homepage to highlight past, present or forthcoming projects, research, exhibitions or field trips related to our activities. 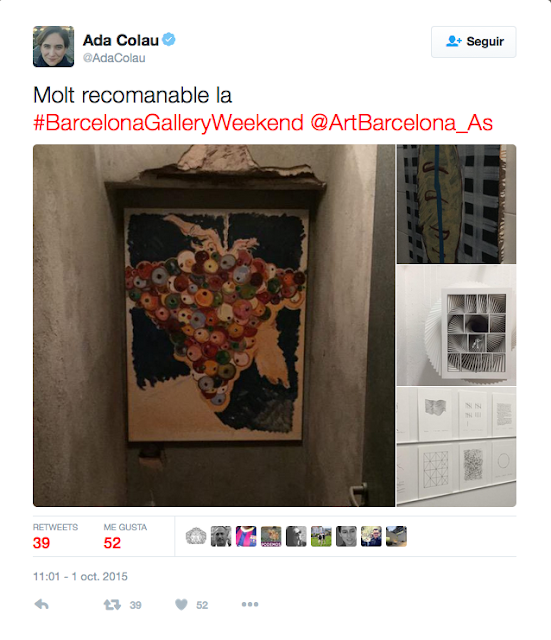 "Highly recommended the #BarcelonaGalleryWeekend @ArtBarcelona_AS". Twitter by Ada Colau, Barcelona Mayor during her visit to Rasmus Nilausen (photographed on the left and upper right corner) and Pere Llobera exhibition at the house of a former priest, La Central Bookstore.

The Common Guild regularly commissions artists, writers and curators a series of short texts to accompany their ongoing exhibitions programme. These commentaries are uploaded as pdfs on their website, and can be printed and easily compiled – see image as a suggestion for how to do this.

Latitudes' commentary text on Roman Ondák's work and exhibiton "Some Thing" (12 October – 14 December 2013) has just been uploaded and can be found as a pdf here. The text follows Latitudes' talk on 21 November 2013 (audio here).

This is the blog of the independent curatorial office Latitudes. You can also follow us on Facebook and Twitter.
All photos: Latitudes | www.lttds.org (except when noted otherwise in the photo caption).
This work is licensed under a Creative Commons Attribution-NonCommercial-NoDerivs 3.0 Unported License.
2014, download, Glasgow, latitudes, Roman Ondák, talk, text, The Common Guild