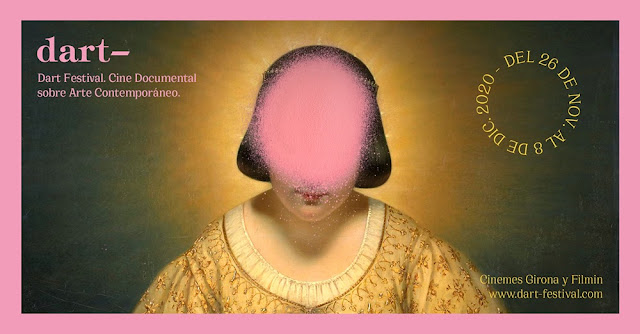 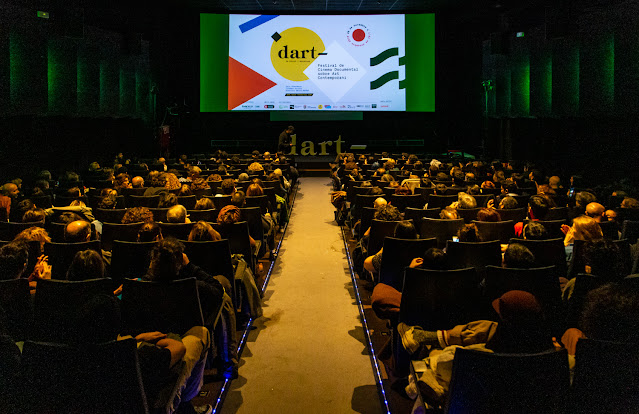 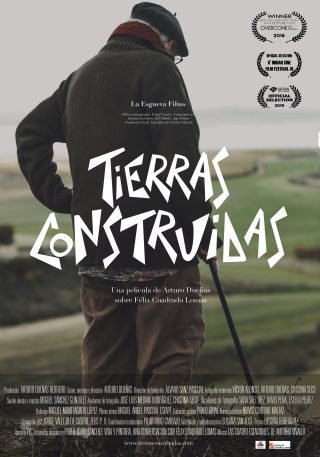 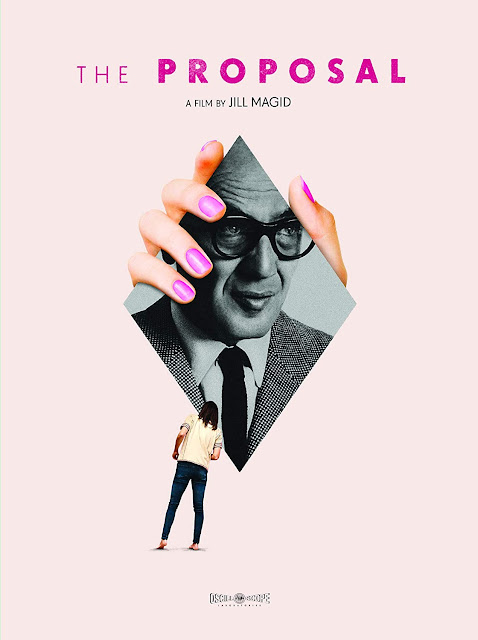 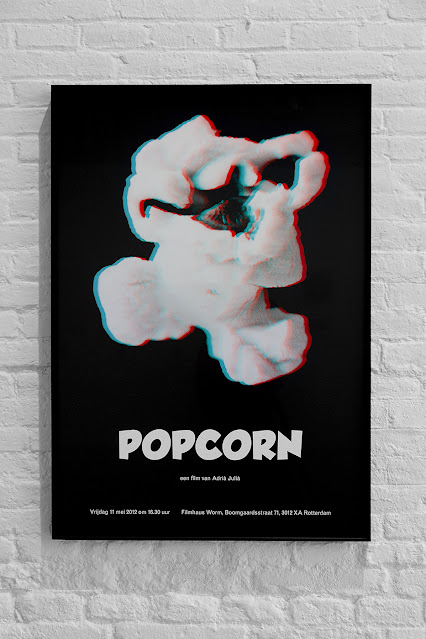 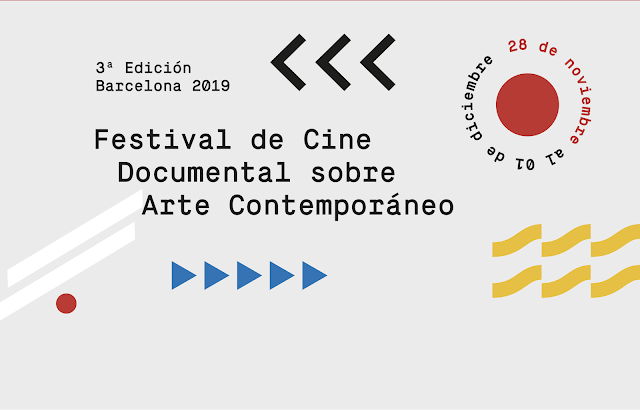 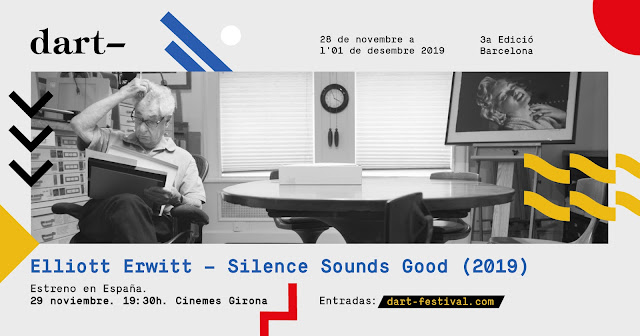 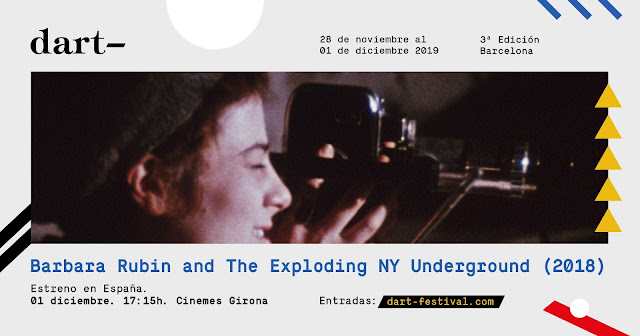 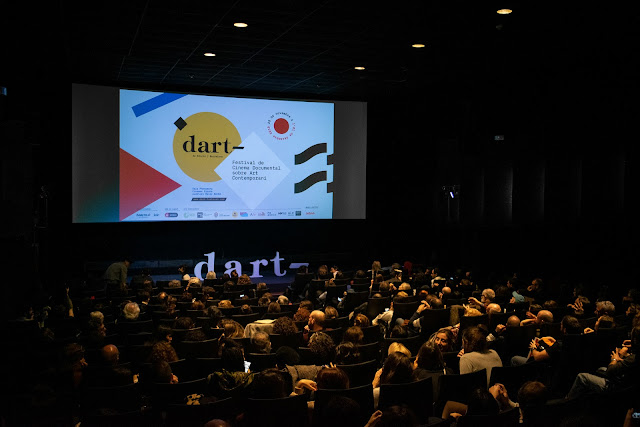 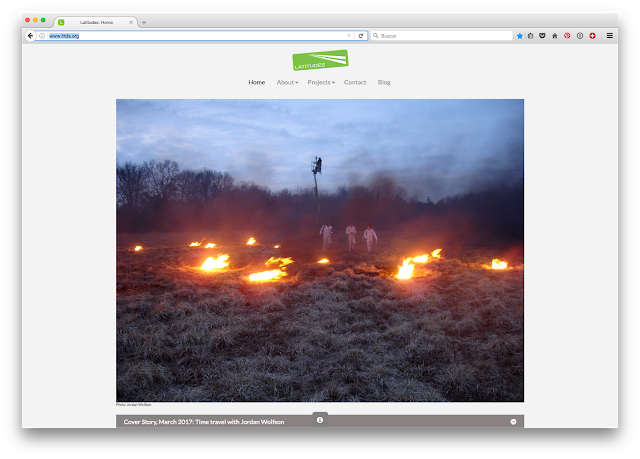 http://www.lttds.org
The March 2017 Monthly Cover Story "Time travel with Jordan Wolfson" is now up on www.lttds.org – after March it will be archived here.
"The film that lends its image to this month’s cover story – Jordan Wolfson’s Landscape for Fire, 2007 – was featured in the Latitudes-curated film programme A Stake in the Mud, A Hole in the Reel. Land Art’s Expanded Field 1968–2008, which premiered in April 2008 at the Museo Tamayo, Mexico City, before touring several venues in Spain, Switzerland, the Netherlands and the U.K.
Landscape for Fire responded to a 1972 film of the same name by Anthony McCall in which the British artist, best known for his “solid light” works, attempted to integrate performance, installation, sculpture and images in movement. Thirty-five years on, Jordan had re-staged this work of the past as though it were a ritual, the repetition of which invoked the almost mystical aura that often surrounds the art of the late 1960s and early 1970s." Continue reading by clicking the grey bar underneath the image
Cover Stories' are published on a monthly basis on Latitudes' homepage and feature past, present or forthcoming projects, research, writing, artworks, exhibitions, films, objects or field trips related to our curatorial activities, and are archived here. 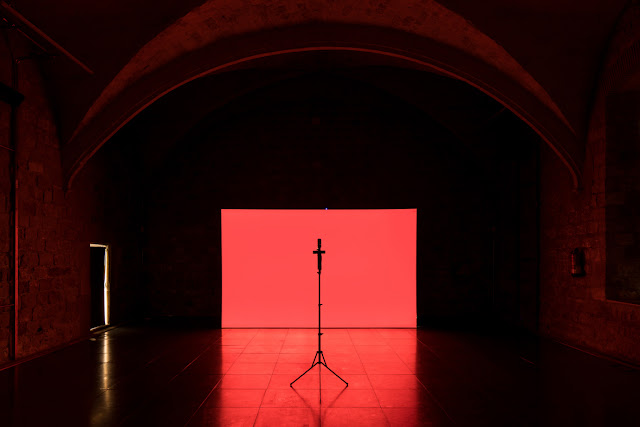 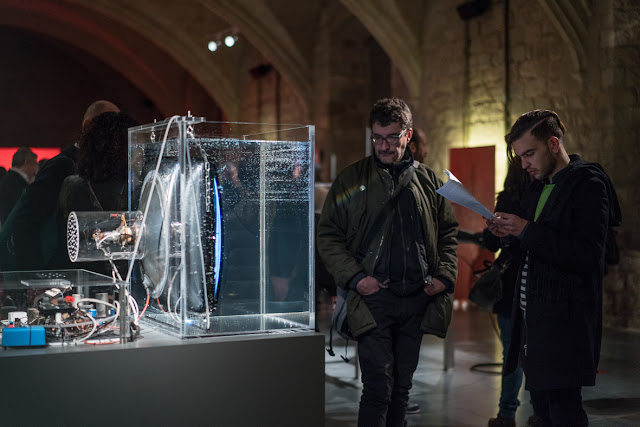 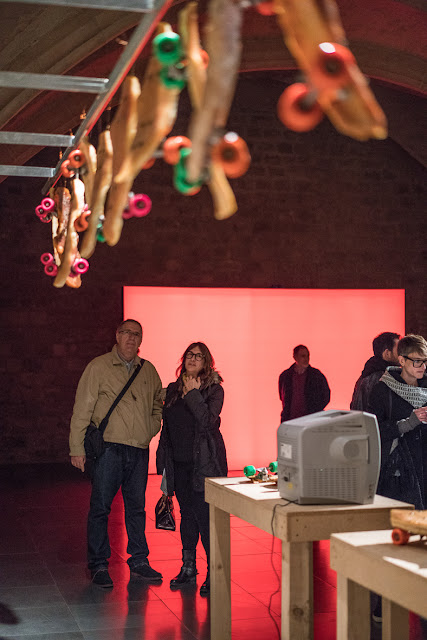 Screening of Jan Dibbets' film '6 Hours Tide Object with Correction of Perspective', every Sunday between 14 June and 5 July, FutureLand, Rotterdam We are pleased to announce the presentation of Jan Dibbets' film '6 Hours Tide Object with Correction of Perspective' (2009) which will take place on Sunday 14 June, in FutureLand, the visitor centre of the Port of Rotterdam Authority [Map here]. Jan Dibbets, '6 Hours Tide Object with Correction of Perspective' (2009), 8 min video, film still. Courtesy of the artist, Port of Rotterdam Authority and SKOR.
First realised in February 1969 as part of Gerry Schum's seminal Fernsehgalerie I ‘Land Art’ series of films screened on German TV, the 2009 realisation of '12 Hours Tide Object with Correction of Perspective' was filmed forty years later to the month (see our 10 February post with production stills), on the beach of the Maasvlakte. The resulting film titled '6 Hours Tide Object...' is the first project of Portscapes, an accumulative series of newly commissioned projects that will take place throughout 2009 alongside the construction of Maasvlakte 2. 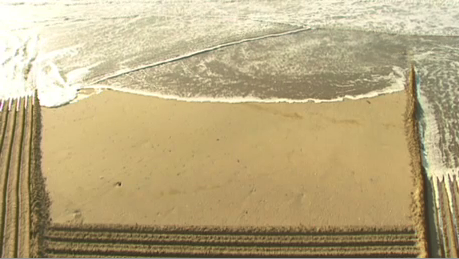 Jan Dibbets, '6 Hours Tide Object with Correction of Perspective' (2009), 8 min video, film still. Courtesy of the artist, Port of Rotterdam Authority and SKOR.
If you would like to receive Portscapes' newsletters, please subscribe here.

FutureLand is situated on the edge of the current Maasvlakte, in Europaweg 902 (500m from the Routiers restaurant). Free admission.

Portscapes is commissioned by the Port of Rotterdam Authority with advice and financial support from SKOR (Foundation for Art and Public Space, Amsterdam) and is curated by Latitudes. 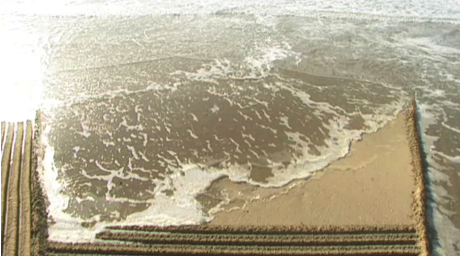 Film commissioned by the Port of Rotterdam, www.maasvlakte2.com with advice and financial support from SKOR (Foundation Art and Public Space), www.skor.nl

This project was realised as part of 'Portscapes' a series of newly commissioned art projects realised alongside the construction of Maasvlakte 2, the extension to the Port of Rotterdam. 'Portscapes' is curated by Latitudes, www.lttds.org

Wed, Jan 28 2009
Coinciding with the conclusion of the screenings of the film programme 'A Stake in the Mud, A Hole in the Reel: Land Art’s Expanded Field, 1968–2008' last October, Latitudes was asked to write a text on the films for Art&Co, which has just been published in their Winter 09 issue num. 5 – see pages above (click on the image to zoom in the text).

Following an excerpt of the original text (which totals over 2,000 words):

"(...) Latitudes developed the film programme 'A Stake in the Mud, A Hole in the Reel: Land Art’s Expanded Field, 1968–2008' at the invitation of the Museo Tamayo Arte Contemporáneo in Mexico City. Premiering there in April 2008 as part of the Tamayo’s 'Panorámica' series, 'A Stake in the Mud...' has since toured to several venues throughout Europe within an auditorium-based screening format, presenting historical works alongside those produced in the last six years.

What were the possibilities for augmenting preordained definitions of so-called Land Art through relation with contemporary practices, and social and environmental ecologies? Though the cycle had its germination in our work on a publication – 'Land, Art: A Cultural Ecology Handbook' (2006) – the dimension of film clearly proposed additional sets of concerns. The title of the programme was drawn from words of Robert Smithson in which he speculates on the site and film of perhaps the most renowned – and certainly most photogenic – of the works associated with Land Art, 'Spiral Jetty' (1970). It attempts to surmise the programme’s dual concern with sheer materiality and physical processes together with the lacunae of filmic representation. Where artists’ use of film or video might appear as a solution to the problem of how to represent something that would otherwise be inaccessible (an intervention in a remote area, for example) or otherwise ephemeral, it apparently creates another – what, or where, does the artwork consist of? Accordingly, what is the status of each film: informal artifact, ‘making of’ movie, documentary, autonomous fiction or something else?

(...)Accordingly, the programme enhanced several ‘Smithsonian’ dialogues across time, but rarely was the magnetism openly declared or intentional. Included in part two of the programme, 'Zênite invertido/Inverted Zenith' (2005) by Brazilian-artist Thiago Rocha Pitta portrayed a mesmerising vortex of water in a metal vessel which slowly diminishes in volume before a steady resurgence. The work supports a tacit mythical connection to Spiral Jetty and its own narratives of mirroring and reversal, but also to the cosmic whirlpools evoked in Edgar Allan Poe’s tale ‘A Descent into the Maelström’. A concern with remoteness, together with the powerful allure of specific sites, threaded throughout the cycle. The itinerary took in the sewers of New York City and Vienna (through works by Gordon Matta-Clark and Hans Schabus), the deserts of the US (Mario Garcia Torres or Walter De Maria), high mountain zones (Ibon Aranberri, Maria Thereza Alves), as well as the paradisiac beaches of Taveuni (Nikolaj Recke), for example. Territorial sculptural acts (Barry Flanagan or Walter de Maria, for example) were encountered, as well as displacements more legible as social or political actions (in the work by Francis Alÿs). Absurd gestures (Damián Ortega) met touristic views of natural phenomena (Nancy Holt & Smithson) while perspectival experiments (Jan Dibbets) greeted ecological remarks (Donna Conlon)."

'Mono Lake' (1968/2004) by Robert Smithson and Nancy Holt is one of the films included in the first part of the programme which we just learned was acquired in 2007 by the Museo Nacional Centro de Arte Reina Sofia in Madrid. Here an acquisition entry on the piece (in Spanish).

Both of these screenings will present a selection of the material that conformed the programme, as follows: 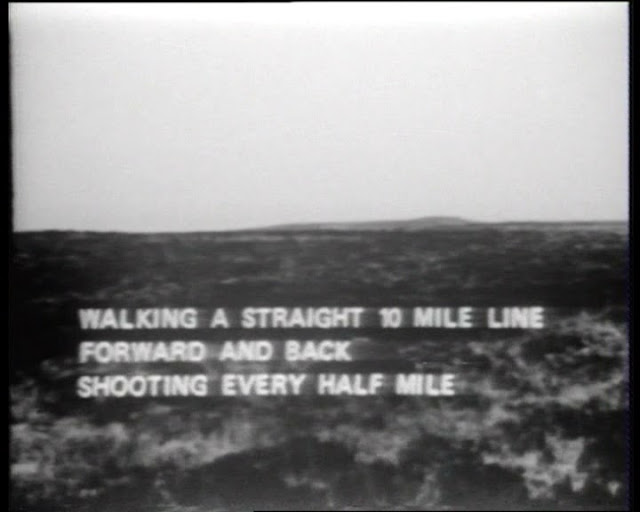 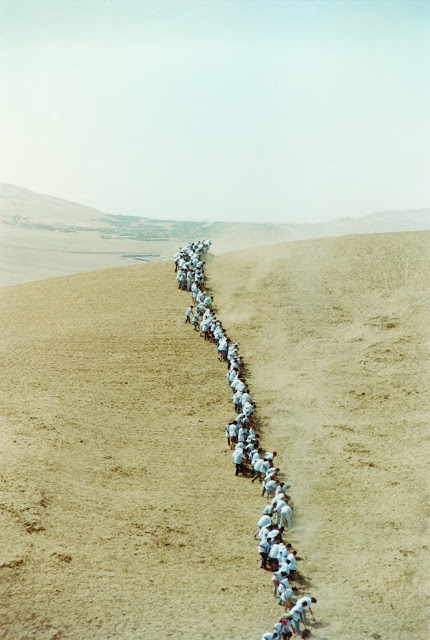